ALEX: The waters are rising. I’m like Jack in Titanic, except it’s Joey Barton who wants me to draw him like one of my French girls. And the iceberg is the board’s desire for us to win the Scottish Premiership in our first season back in the competition. “Full steam ahead”, they cry, and I point to Phillipe Senderos and suggest that maybe we shouldn’t be thinking about breaking records just yet.

Next up, we have bottom-placed Dundee at home. To describe it as must-win is perhaps underplaying the game’s significance, but it’s important to remember that we’re in fifth place, five points behind Hearts in fourth and only two wins behind St. Johnstone in third. The board might have unrealistic expectations, but I don’t: we need to win, close the gap, and we need to do it by whatever means.

I switch to a 4-3-1-2, which toughens the midfield, with 6ft 5 Matt Crooks hopefully bringing some aerial presence to our set-piece threat. Kiernan comes in for Senderos: he has a pace of 14, even if he’s otherwise a bit worse, and Wilson is set to cover back behind the other defenders.

Barrie McKay has an advanced playmaking role with licence to get forwards, and I retain my faith in Garner and Macheda – they desperately need to start scoring though. We play a fluid, possession-based system and although it’s new to the team, they already have reasonable familiarity according to the tactics screen, which gives me some hope. And hope is imperative right now. 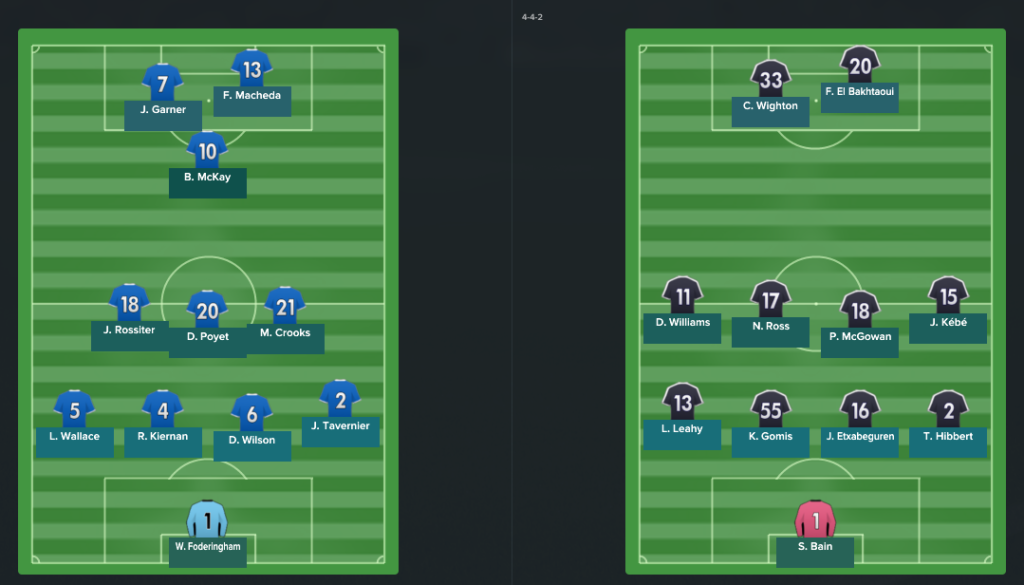 We start well, controlling the tempo of the game and passing it around fluently. Before long our patient, possession-based style pays off, as sustained pressure around the Dundee penalty area sees chance after chance created. Eventually, we get the breakthrough, as Rossiter wallops it in and a massive deflection takes it past Bain in the Dundee goal.

Crooks then thumps home a close range shot, but before half-time Dundee get a penalty thanks to a silly foul by Rossiter. It’s 2-1 at half-time and I possibly have 45 minutes to hold on to my job. The game ebbs and flows, before Dundee commit a rash challenge just outside the box. It’s Tavernier territory, and thankfully the full-back delivers again to give us a convincing 3-1 win. We have 61% possession, completing over 600 passes, and muster 12 shots on target. Why can’t we play like this every week? 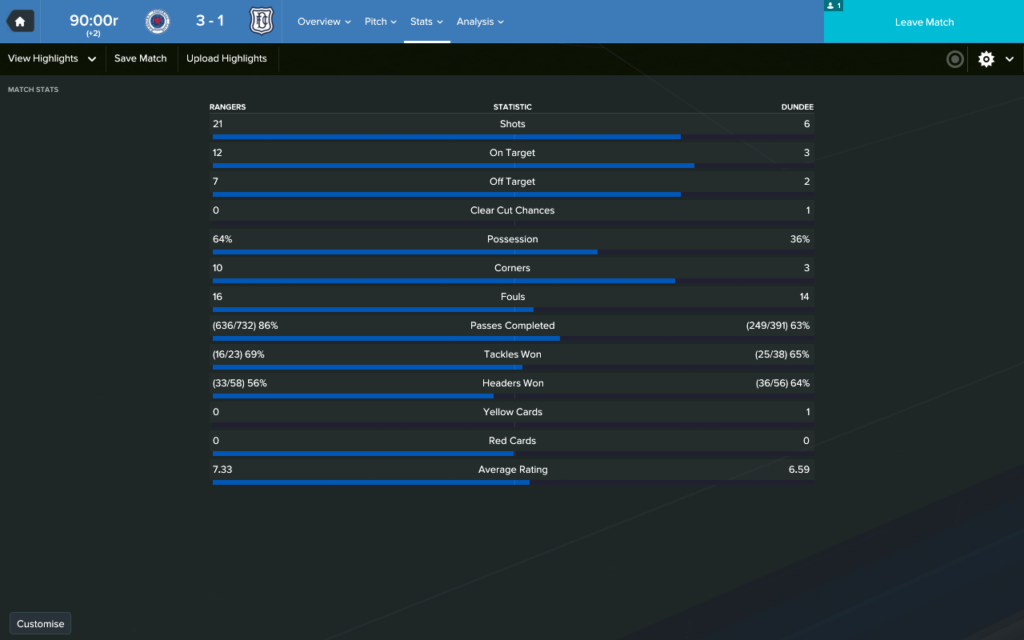 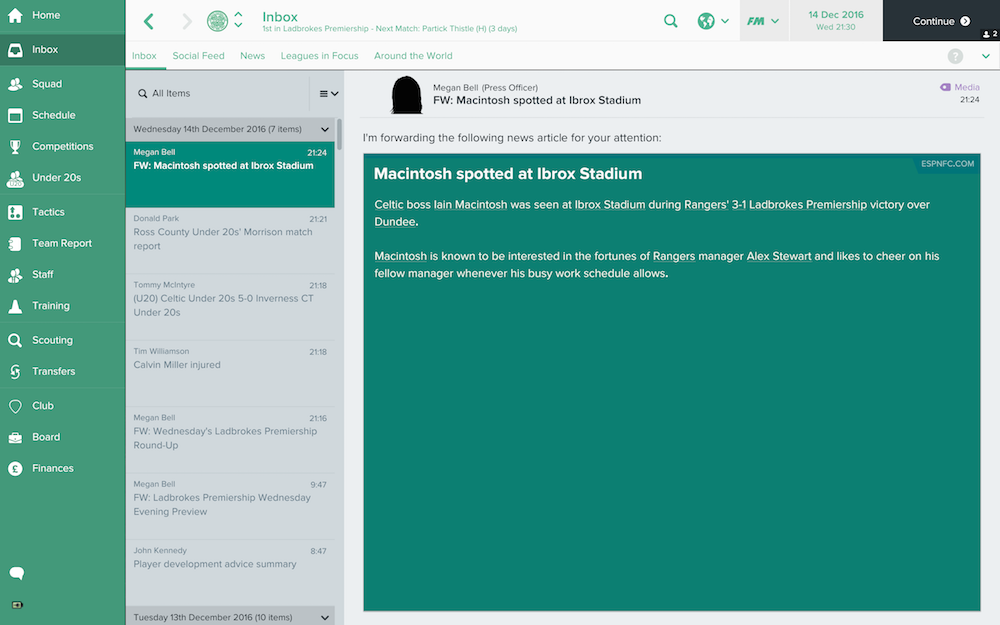 IAIN: You know what? I’m worried about Aberdeen away. I try to tell Alex exactly how worried, but he’s just pacing the office and muttering about Dundee under his breath. It’s almost like he doesn’t care about my problems. But, in fairness, my problems really are starting to solve themselves.

Craig Gordon is back. Scott Sinclair is back. James Forrest is back. I’m taking nothing for granted: Aberdeen have lots of pace on the flanks, so my full-backs will have to sit a little deeper. And I need to maximise every opportunity, so I’ve tweaked my far post corner ploy and I’ll have 6ft 5 AJ, standing in for a tired Nir Bitton, as the main target. We work on attacking set-pieces for two days before the game. Let no-one say that my Betfr…BetBright Cup success has made me complacent. 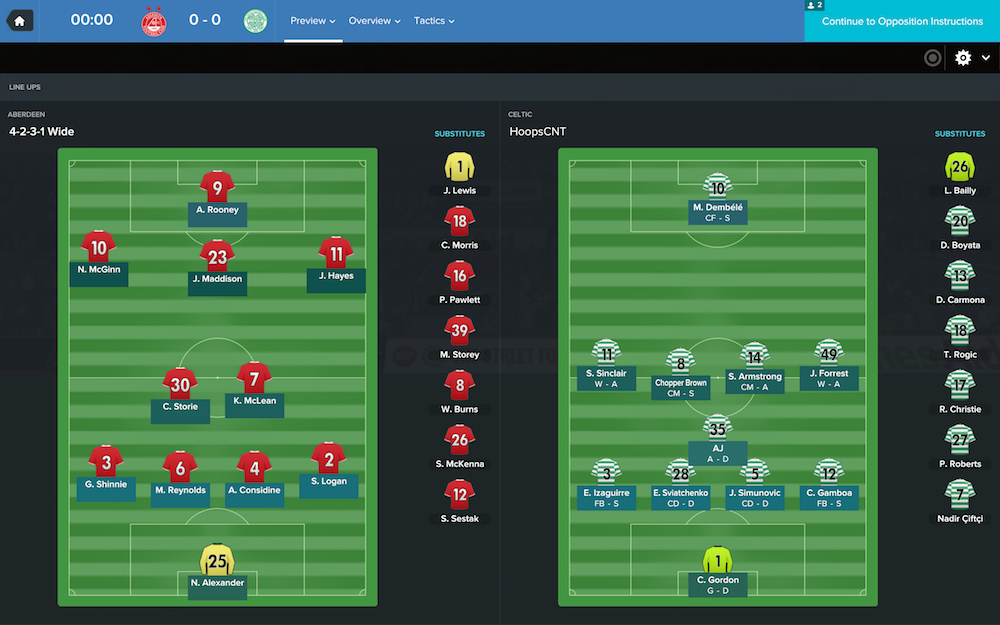 Oh my God. I could play this game for 100 years and I’ll never see a team so fortunate to escape with a point. And I’m talking about Celtic.

We start slowly, allowing them all of the possession and a host of chances. Sinclair pulls up with an injury and limps off. And then we score, and on reflection I think that’s the worst thing that could have happened. It’s a vindication of my obsession with set-pieces, in that AJ wins the ball in the air and knocks it down to Moussa Dembele for the easy finish, but it masks a really poor performance.

I urge the players not to be complacent, but I think I should have bollocked them. I certainly do that after full time. Aberdeen are all over us. They pour through us at will. They hit the post, they hit the bar, they force world class saves out of Craig Gordon. And they equalise. They do quite a lot of this after Chopper Brown is sent off for the FIFTH time this season for a horrific, two-footed lunge. That’s yet another two week fine for him. He’s pretty much playing for free at this point.

I pull the midfield back, I pull the wingers back, I urge them to tighten up and waste time. And somehow we hold out for the draw. We have no right to hold out, but we do. I could defend the players afterwards, I could uphold their honour, but as far as I am concerned, they have no honour today. Aberdeen have been robbed. 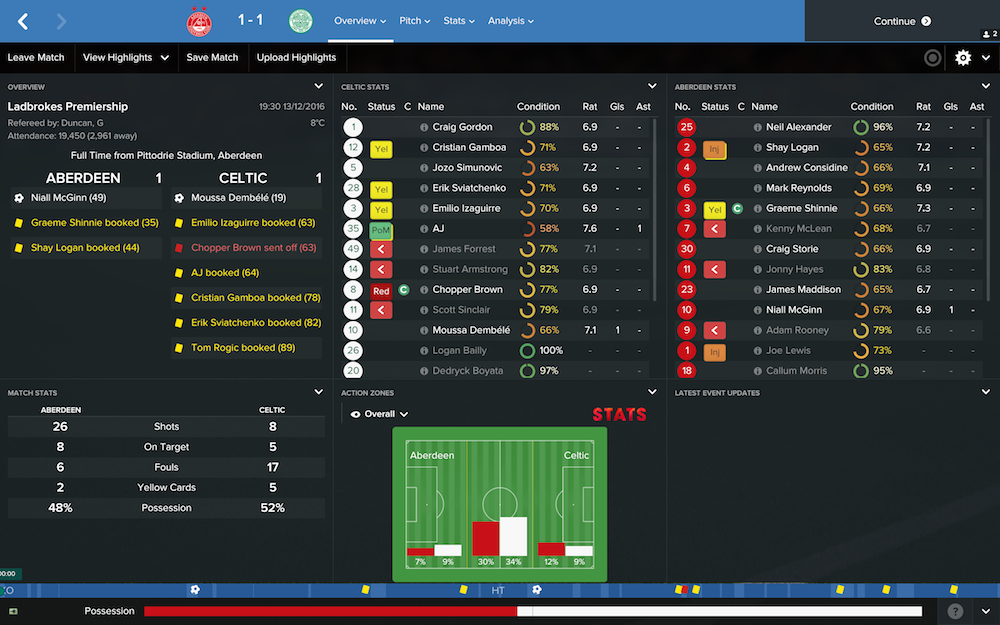 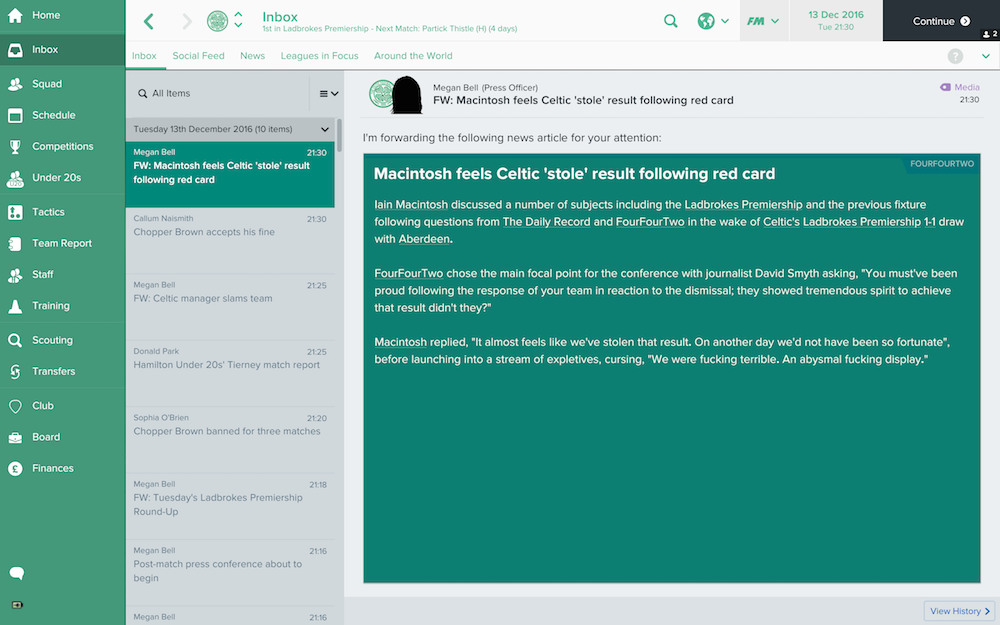 ALEX: Next up are Motherwell, the team immediately below us. We are away, but I keep the formation the same, hoping that familiarity and momentum will see us through.

The team is also unchanged: Kiernan has done reasonably well and Crooks capped off an impressive display against Dundee with a goal. I am concerned that my strikers have missed a lot of chances, but I also reckon our xG rating must be pretty high. The pressure is, without doubt, still on. 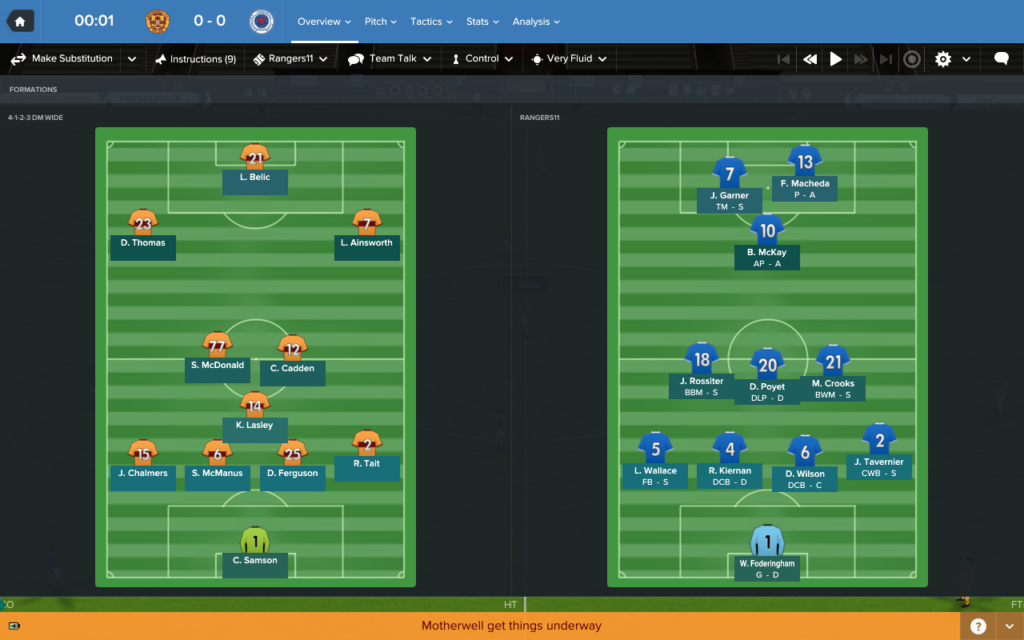 This game is evil. I mean, Damien in The Omen, Hannibal Lecter, Jaws killing innocent swimmers evil. We have seven shots on target, two clear cut chances, 58% possession, and complete over 500 passes. And we still fucking lose 3-1.

There’s nothing I can do. It’s ridiculous. Fuck off. We dominate them in every single aspect of the game and still we’re hammered. The board are disappointed in my management of the team and my job security plummets to very insecure. I want to run in with a sheaf of paperwork that shows just how unlucky we were to lose that game but, despite the complexity of FM, there’s no ‘run in with a sheaf of paperwork’ option.

I just have to sit there as Iain racks up another win and pray that things change for the better. And soon. 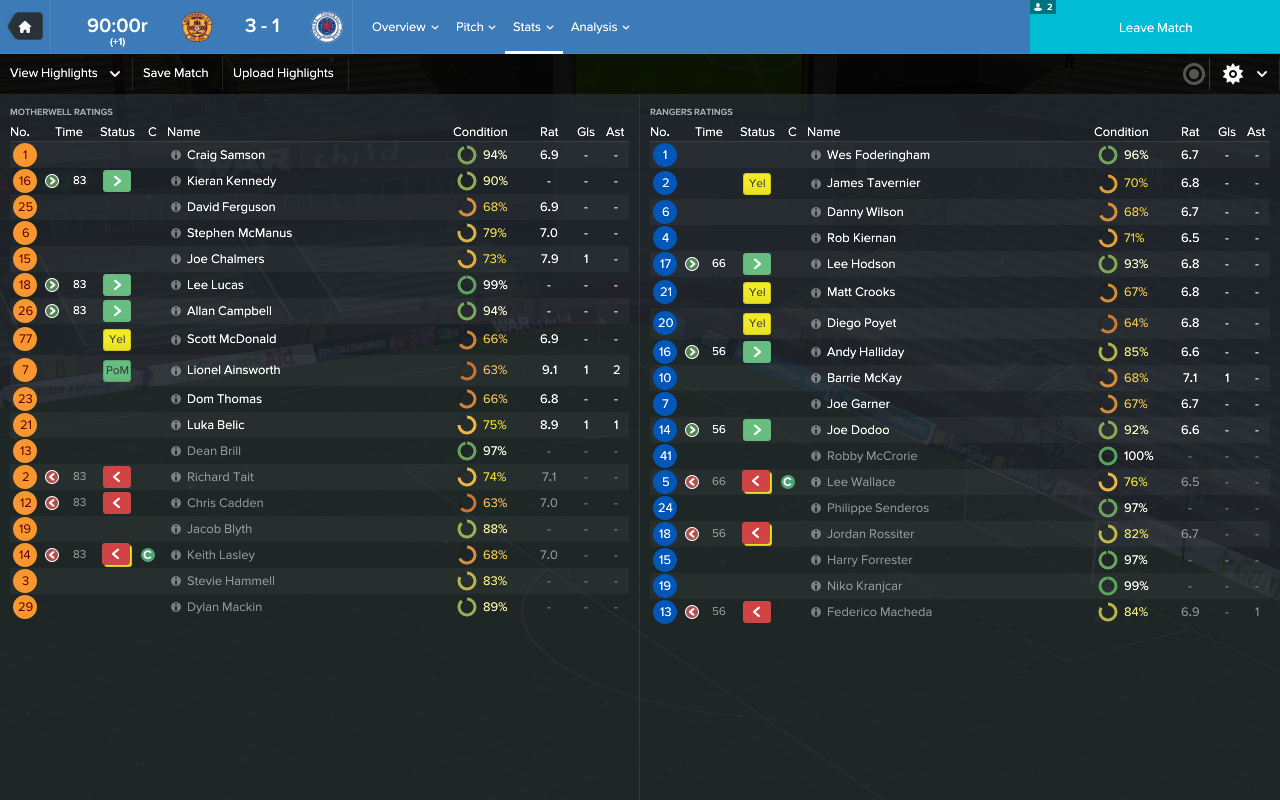 IAIN: We need a response. We’ve got Partick Thistle at home and we’ve drawn our last three games. It’s not a crisis. But it’s certainly a slump. We just need one of those games where we dance around the pitch, splitting the defence and racking up goals for fun. But we haven’t found goals easy to come by of late. The goal against Rangers was offside, we drew a blank against Ross County and we needed a corner to score against Aberdeen.

The full-backs will be pushed up again and I’m delighted to see that Sinclair is okay and able to start. Forrest is out with a cold, so there’s another chance for Patrick Roberts, and we’ll welcome the calming influence of Nir Bitton back to the midfield. Chopper Brown, naturally, is suspended until 2023. 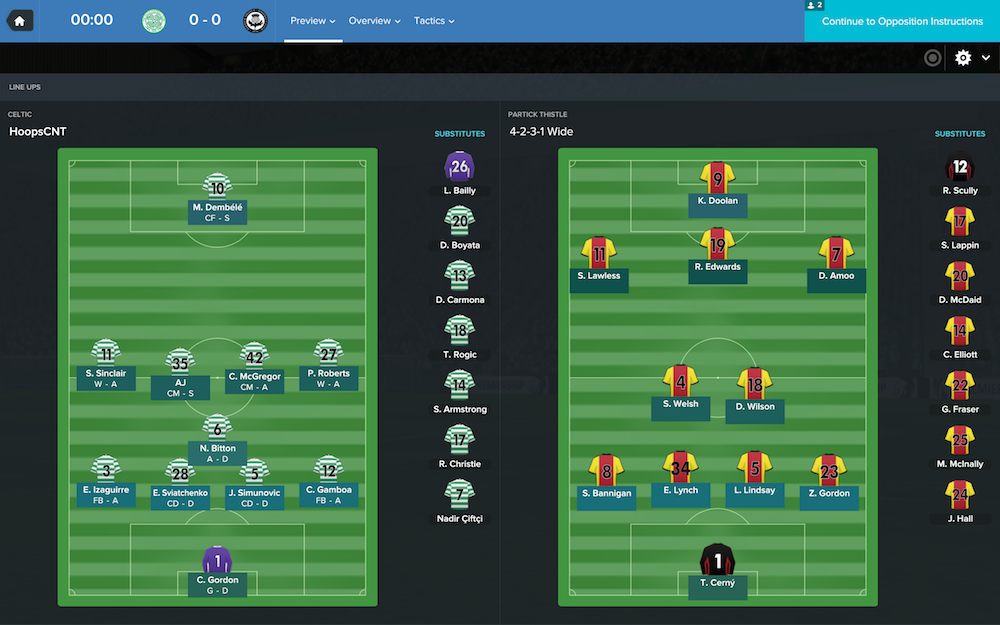 Well, I’m not going to complain. A win is a win. And this was at least a competent, deserved win. We played with all the confidence of men who had just been schooled by Aberdeen and it took some time before we began to string passes together. But then we opened the scoring when Dembele headed home a lovely cross by Sinclair.

We weren’t exactly dominant. In an effort to achieve dominance, I switched from counter to control and pushed the line right up. Dembele turned provider after the break, cutting a low pass back for AJ to slam home. With the two-goal cushion, I really wanted to push on and score more, but even though attacking football was activated, no more goals followed.

And then disaster: Dembele went down clutching his knee. Mercifully, he’ll only be out for four weeks, but with Leigh Griffiths still not ready to start games, it leaves me relying on Nadir Ciftci. That can’t be good. 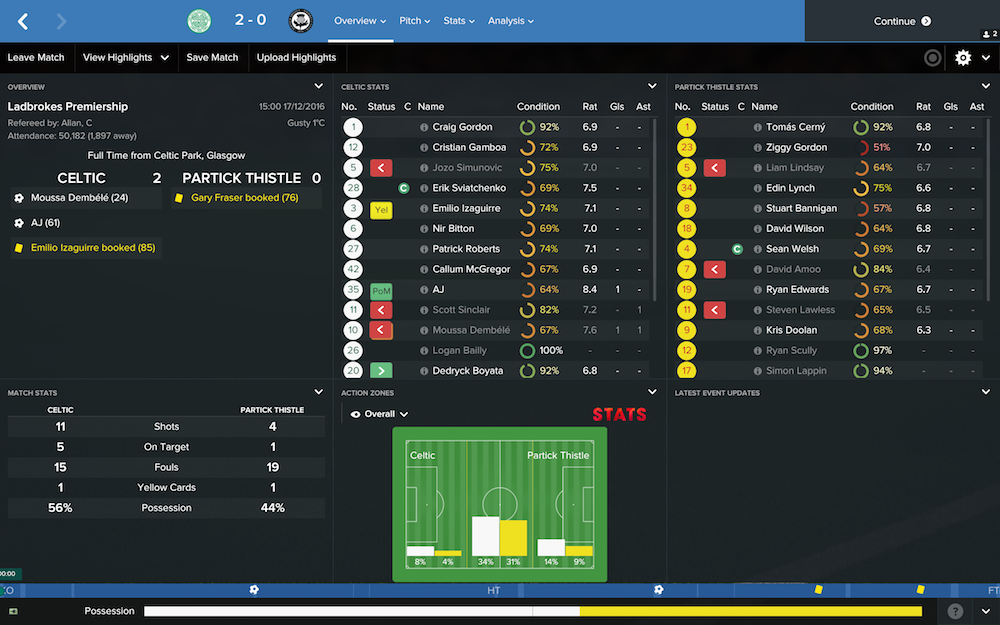 ALEX: We retain the 4-3-1-2 formation for Ross County away. There is no way on earth that a team that is creating this many chances and having this much possession can continue to lose forever. As Iain says to me, sometimes you have to play chicken with this game: drive as fast as you can at the match engine and wait for the bastard to blink.

Dodoo comes in for Macheda. I also drop Poyet, who desperately needs a rest, bring in Halliday and shift Rossiter to the playmaker role. Once more unto the breach. 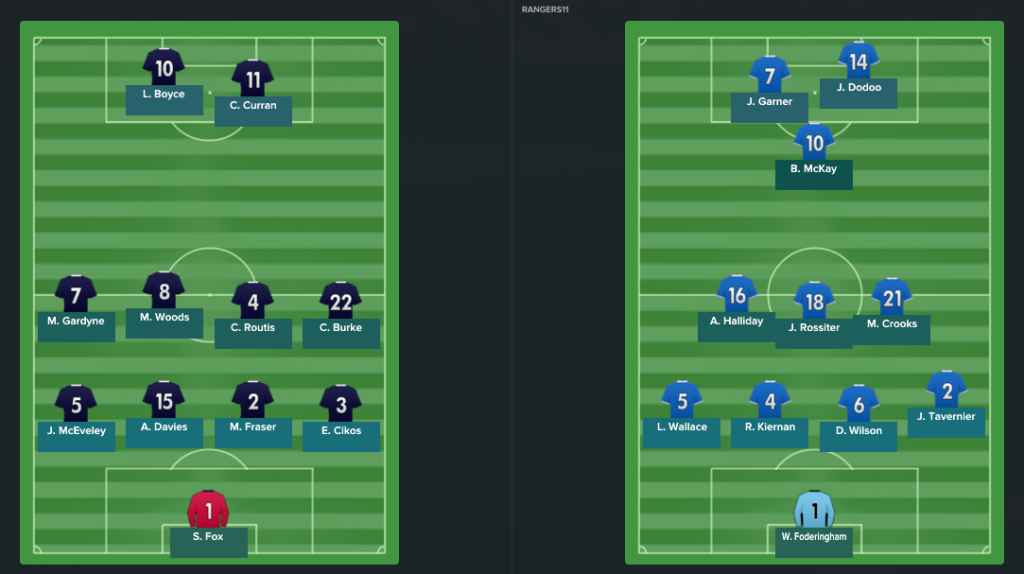 Well that was lovely. Again, we have over 60% of the ball, complete a Bayern-esque 670 passes and, but for a late goal conceded when Foderingham drops the ball at the feet of Liam Boyce, would have had a clean sheet.

Our 17 shots, seven on target, and one clear cut chance yield three goals, the first a thunderbastard from Crooks, who is fast becoming my go-to guy in a crisis, before my switch from Macheda to Dodoo pays off and he fires one in from the edge of the area.

McKay scores too, but it’s the manner of the win and the three sequential performances – that show us generating a ton of chances, keeping the ball well, and passing superbly – that really matters. Yes, the board are still disappointed and yes, my job security is lower than a Trump approval rating, but I can see blue shoots of recovery here.

Two games at home up next: I have an inkling I just may be able to pull this one out the bag. 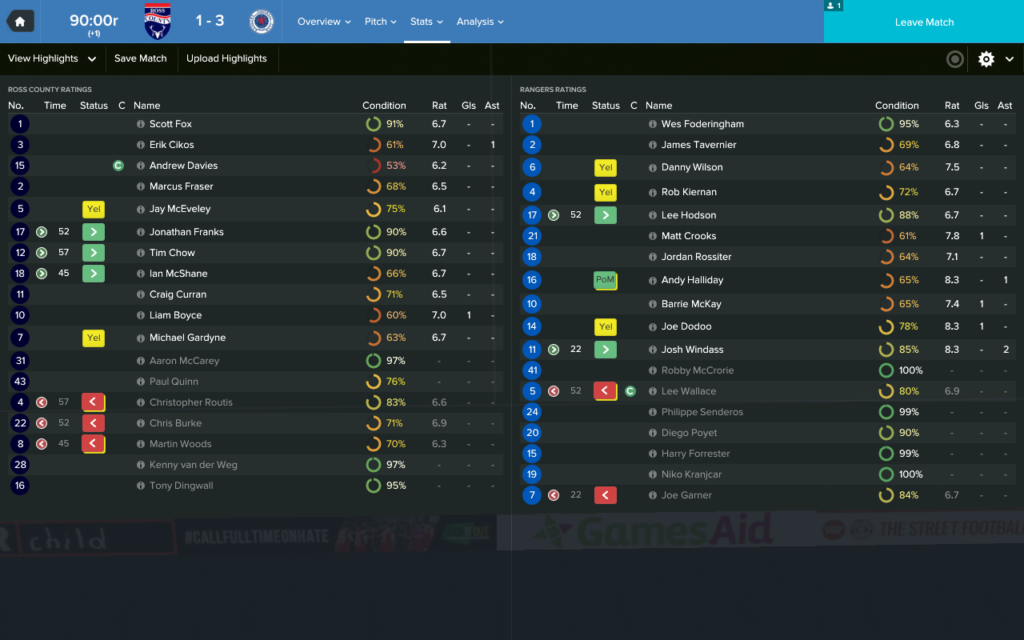 IAIN: So, let’s see what Nadir, and there’s a name that bodes ill, does up front. He’s incapable of doing the complete footballer thing, so we’ll play safe and make him a supporting target man. If it doesn’t work, Griffiths is now back in full training and will sit on the bench.

But aside from that, there will be no changes. It’s Hamilton at home. We did them 6-1 away. Another nice, straight-forward win would be appreciated. Not least because we’ve got Hearts away in four days and they’re actually quite good. 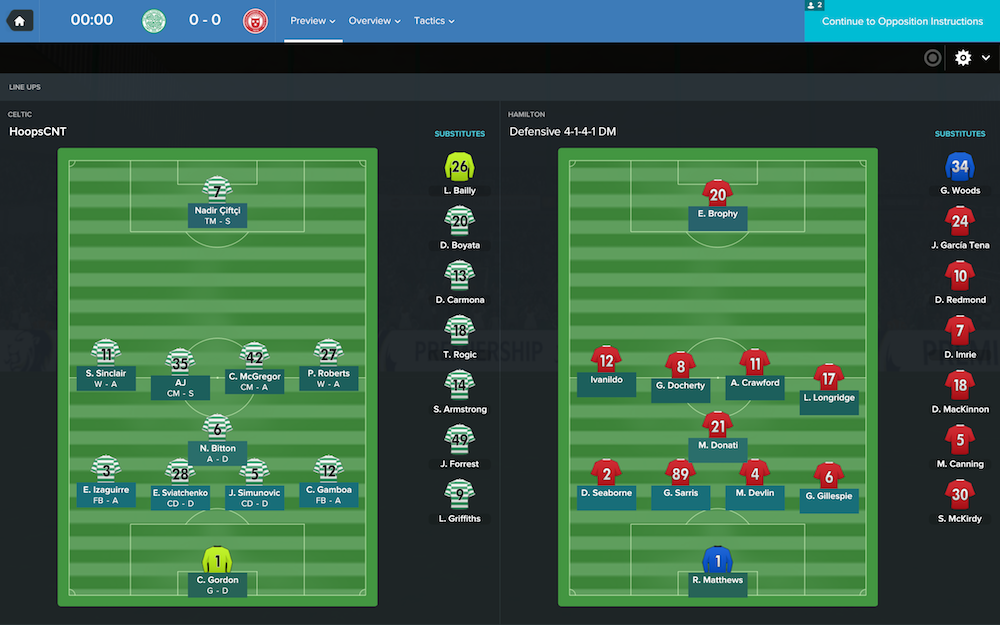 Yes, that’s exactly what we wanted. That’s the game where we dance around them. Roberts opens the scoring with a lovely curled effort, Callum McGregor doubles the lead two minutes later and a deflected Nadir effort gives us three on 36 minutes.

When Scott Sinclair makes it four within seconds of the restart, the rout is complete. I’m able to remove tired, key players from the fray and allow the game to play itself out. If only every match could be this easy. I mean, it wouldn’t make for a very interesting read, but it might at least stop these awful palpitations I’ve been getting. 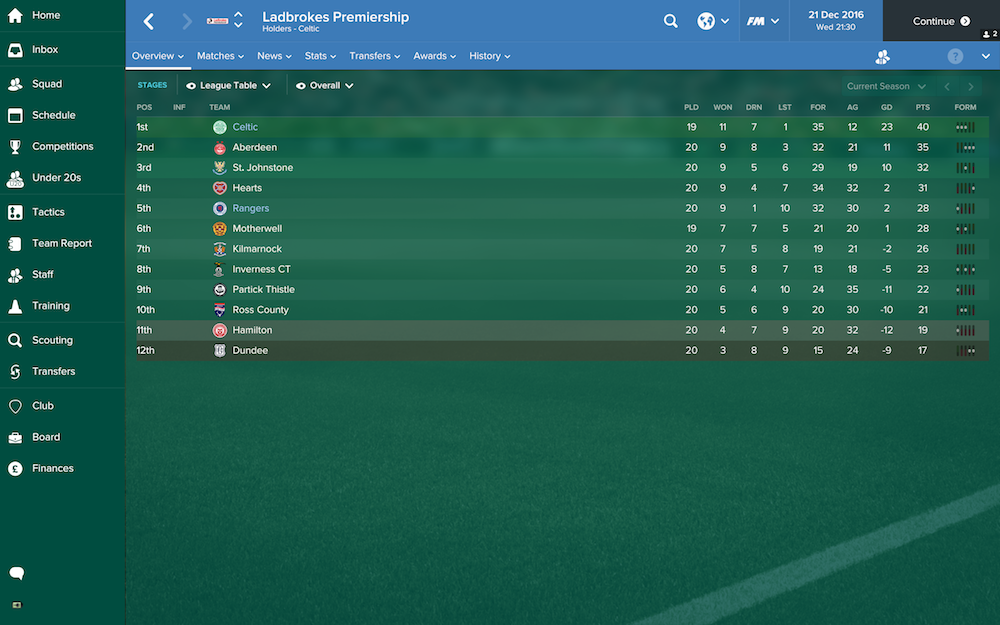