IAIN: It’s been a busy day, rushing from one assignment to the next, but only one task kept me awake last night. Beating Rangers. Or, at the very least, not losing to Rangers. I have played many games of Football Manager and its predecessors and I have faced many cup finals and must-win promotion sealers. But I’ve never experienced anything like this. A knife’s edge between momentary redemption and unprecedented failure. For if I lose this, I really am in so much trouble.

All I can think about is the Old Firm game but, unlike Alex, I’ve got other commitments to deal with first. I have to open my Champions League group stage campaign with a trip to Atletico Madrid. Nice and easy.

I don’t feel that I can go into a game like this, against opponents of this standard, without locking everything down, saying some prayers and hoping for a kind and merciful God to protect me. But I also have to be careful with my selection because I don’t want to drain my best players ahead of what I consider to be a vastly more important game against Rangers.

I choose to give Chopper Brown a chance to redeem himself in the middle, mostly on the basis that if he gets sent off for a fourth time it makes very little difference to my plans on Sunday. If anyone thinks I’m playing that man in an Old Firm game with his reputation for violence, they’re mad. Stuart Armstrong will come back for that one. 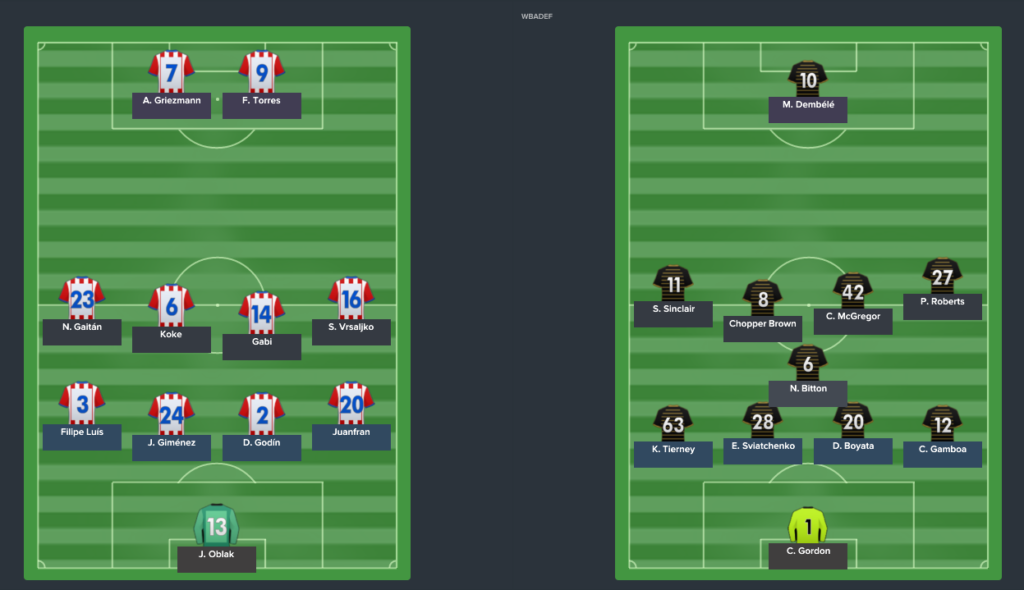 It’s not as bad as it looks. Well, it was for 30 minutes. That’s how long it took them to score three goals and me to decide the game was a write-off and that I may as well test out the tactic I’ve been working on for the weekend.

We shift to a 4-3-3, counter-attacking style that gives us lots of chances to break, lots of support up front, but still leaves us looking sturdy at the back. And you know what? It works really well. We get one goal back through Callum McGregor and we push for a second before conceding a fourth towards the end. By the final whistle, we’ve made the match stats look quite balanced. Not the scoreline though. That still looks terrible. 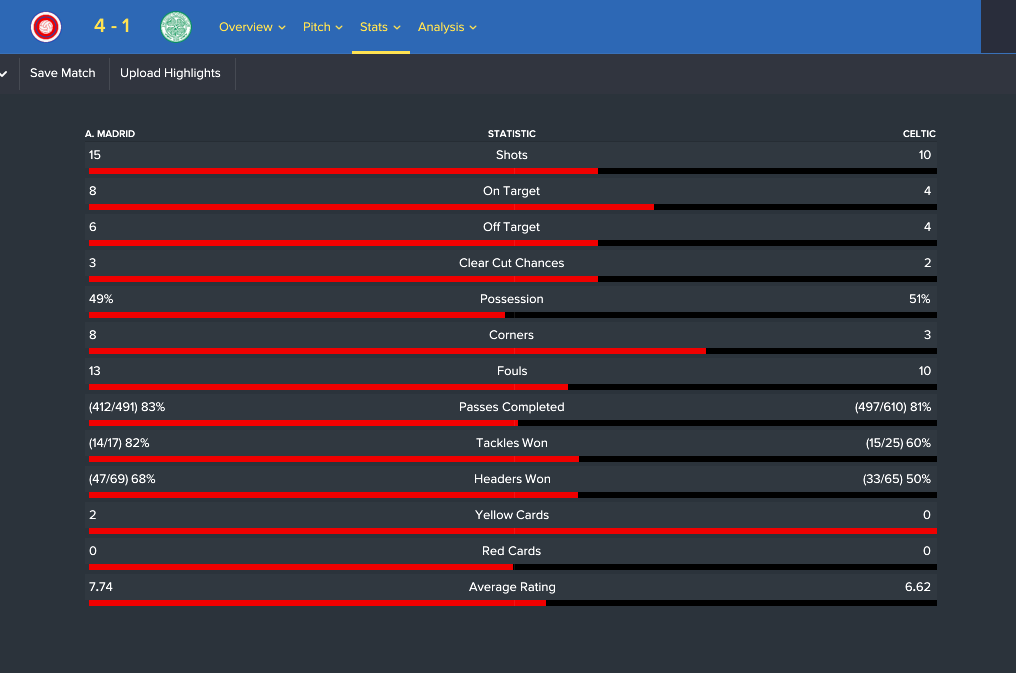 The only good thing to come out of Wednesday’s trip to Spain was the sense that we might have finally found a balanced formation with this 4-3-3. There was plenty of bad. But there was even worse back at home where Stuart Armstrong managed to injure himself.

That leaves a straight choice between Brown and young Kris Ajer in the middle. And I don’t know what’s worse, playing a kid or playing an unhinged, renegade 30-something with the scent of blood in his nostrils. Jozo Simunovic, gradually regaining fitness, comes in for Dedryck Boyata, but that aside we are unchanged.

There’s no way of sugar-coating this. We’ve only won once in the league in five games. If we go to Rangers and get our arses handed back to us, I’m in serious trouble. I realise that Alex will have his own problems if he loses, but A) I don’t care and B) he’s in far more of a position to plead a transitional season than I am. I am the manager of Celtic. It’s first or nothing. And currently we’re ninth.

The messages are flooding in from the social networks. Not many of them are positive. Everyone expects Rangers to win. Even me. 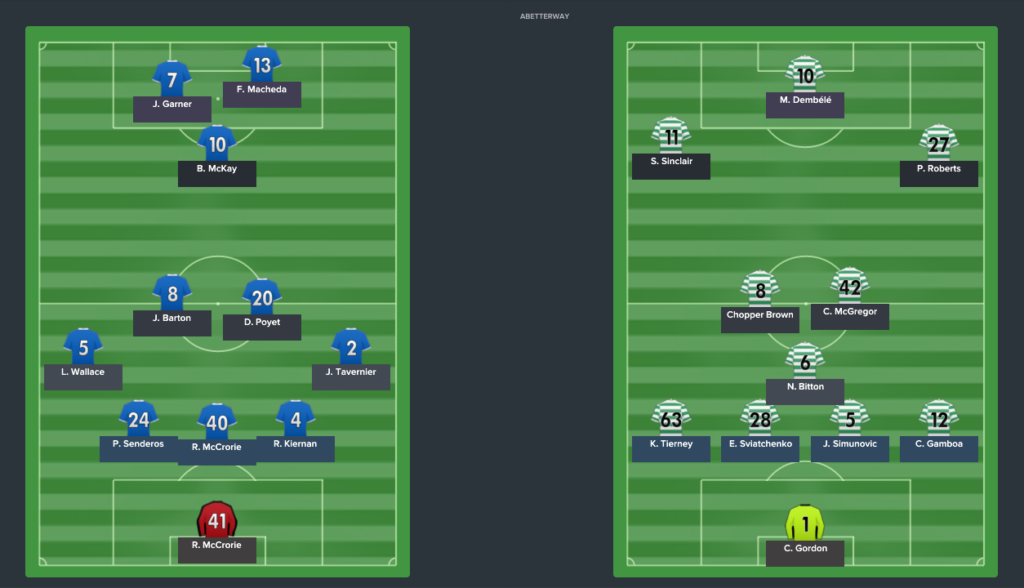 ALEX: It’s only one game, I tell myself. Just a simple game of Football Manager. So what if people are watching? So what if we’re languishing towards the bottom of the table and the board are casting looks that veer wildly between anxious and angry? It’ll be fine.

I’m ready. Or at least I think I’m more ready than Macintosh. He’ll be sweating on this, I know. I spent the evening reading Paddy Agnew’s book about Serie A and walking the dog; Iain probably spent it pacing back and forth, fretting about Chopper Brown’s mental state and the form of Dembele.

I retain the 3-5-2 with wing-backs formation that served me well against Hamilton, even though Lee Wallace is playing through an injury with painkilling injections. There was enough in the Hamilton game to convince me that a direct approach might work and, knowing that Iain had a tough game in the Champions League ahead of our fixture, his squad might tire.

Having said that, with Rangers at home and Macintosh in charge of Celtic, there’s a casual assumption among ‘Gers fans and the wider football community that it will be a walkover at Ibrox.

I’m not so sure: Celtic’s squad are actually stronger, and my faith in young players named McCrorie means that I have a two-star centre-back and a two-star goalkeeper, all in the name of building for the future. Speaking of centre-backs, Danny Wilson’s continued absence means starts for Senderos and Kiernan, which is hardly the stuff of dreams. When building castles in the final third, the foundations should not be Rob Kiernan.

IAIN: For the first time in the league this season, we play to our level. There’s a slightly awkward start where we can’t get hold of the ball and then we take control of the game, squeeze tightly and refuse to let go.

Christian Gamboa opens the scoring with a snapshot when Rangers fail to clear and then Callum McGregor doubles the lead before the break. We’re getting width out of Scott Sinclair and Patrick Roberts, McGregor and Brown are dominating the midfield, and the defence holds out without a moment’s fuss. The full-backs are exceptional and my only concern at half time is complacency.

Thankfully, there’s none of it. We have a third goal ruled out, which is a shame because Moussa Dembele has been under a bit of pressure and could have done with a boost, and we make countless chances afterwards, but Rangers just about keep us at bay. Simunovic’s lack of fitness means that I have to bring on Boyata towards the end, but even that doesn’t ruin the day. Full time comes without incident and a two-goal win is the very least we deserved. It could have been four.

I feel relaxed. Finally. After so many afternoons of tightening guts and clammy hands, I feel as if this is something I might be able to enjoy. We are a young side playing attacking football and today we faced our demons and scared them away. I want this to be the turning point. I want it so badly to be the turning point. But I know that there’s a long way to go yet. 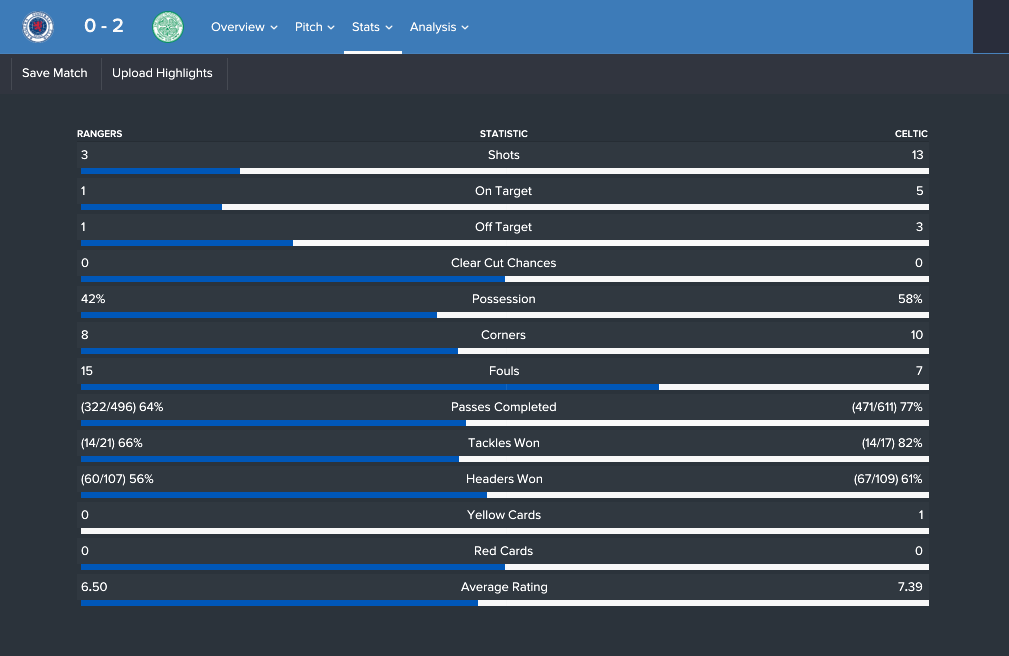 ALEX: I have nothing to say. I’m like Martin Sheen staring into the mirror at the beginning of Apocalypse Now.

After the first goal went in, everything became a blur. Kiernan was awful, I know that much. Wallace could barely stand by the end of the game. I finished with a 2-3-5, hurling the ball forwards without hope or expectation, just a deep, deep sense of dread.

If looks could kill… pic.twitter.com/Oh1rKh9SYE

On top of that, I have to endure Iain’s happiness and, worse still, his magnanimity in victory. There’s nothing worse than a nice man and a good winner. Still, onwards, to Falkirk in the Cup, Surely things can’t get any worse? 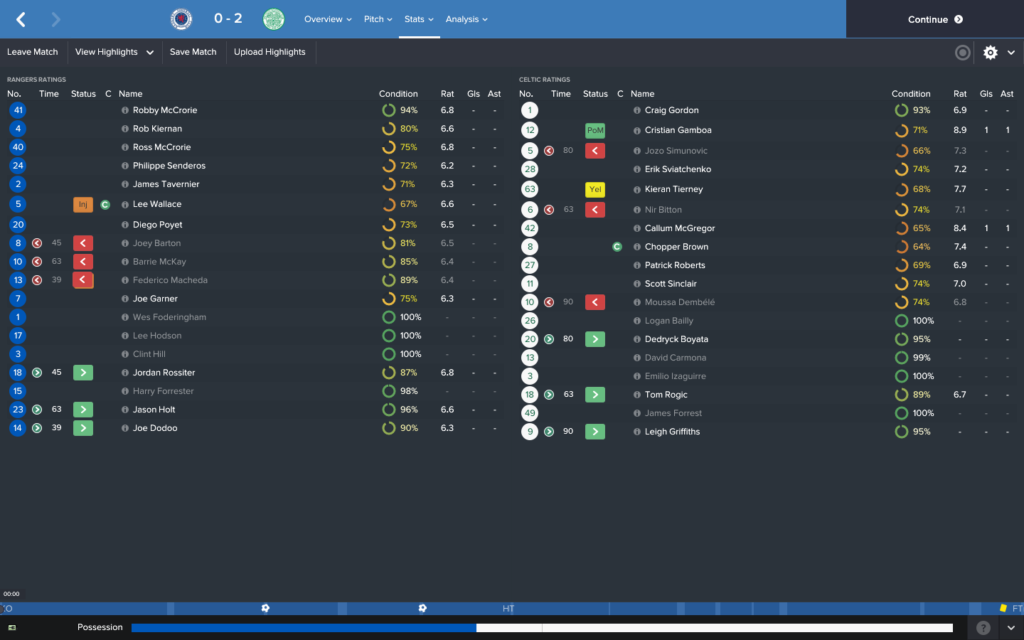