IAIN: Despite the fact that we haven’t been playing particularly well, a win against Sunderland would be a third successive victory. It’s not quite as impressive as the run an increasingly jubilant Alex is on with Liverpool, but it’s not to be sniffed at.

I try to change shape a little, making us narrower in the hope that teams don’t get up in our gaps and ensuring that the overlapping attacking full-backs balance out the need for width. I wish Alex Iwobi hadn’t been such a tit. In the vain hope that he might give his head a wobble, I stick him on the bench. And that means no place in the match day squad for that malignant twat Ozil. 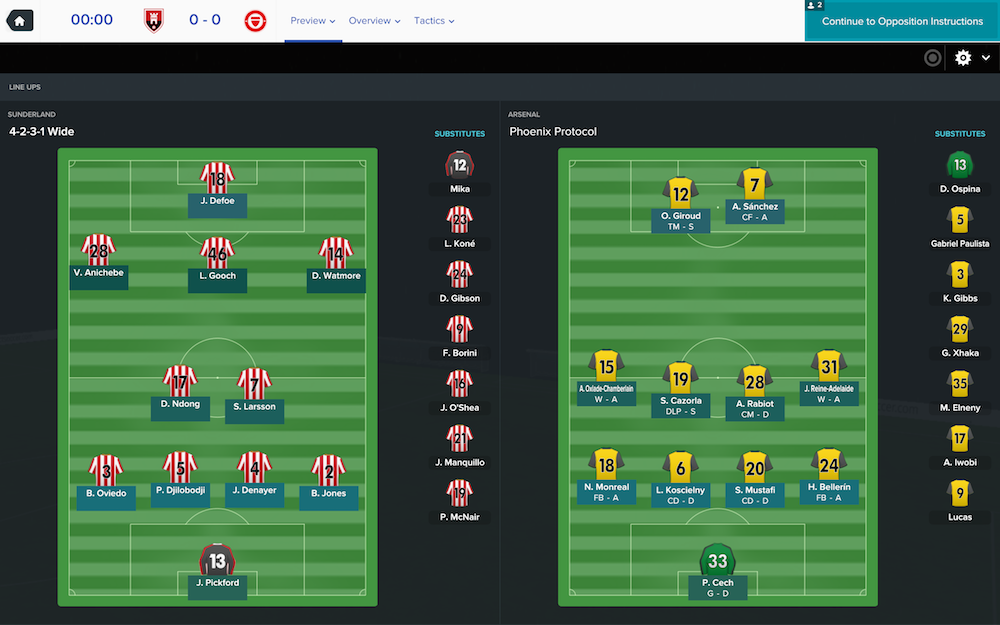 I can’t take much more of this. Once again, we take the lead in an impressive opening; Koscielny scores again, slamming home from a Sanchez cutback after a nicely worked throw-in. Once again, I tell them not to be complacent. Once again, we lose our lead in the opening moments of the second half. And then it gets much worse.

We lose Reine-Adelaide and I’m forced to throw the sulky Iwobi back into the fray. We lose Giroud too. But that means that there’s nothing to stop me reverting to the Cobra Protocol. We’ve only got one star now and that’s Sanchez. There’s nothing to lose. Ten minutes from time, Cazorla finds the Chilean with a perfect through ball. He’s clear on goal. This entire FM Project balances uncertainly on a tightrope…and Sanchez scores.

Then we lose Hector Bellerin to injury as well. I’ve got three wins on the bounce, but I’m not sure I’ll have any players left to compete for a fourth. 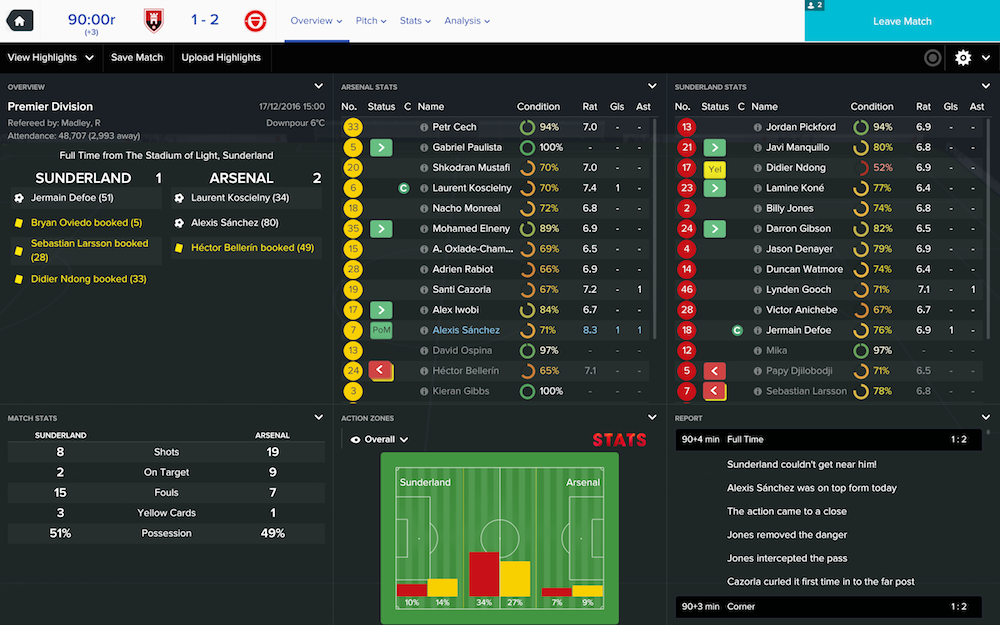 ALEX: Next up it’s Manchester City at home. They are five points clear at the top, but we are unbeaten in four and have been playing such nice football that I occasionally make actual noises of pleasure, out loud and everything.

Mane has given me something to think about too: Liverpool play best in this narrow 4-3-1-2 I have going, but that means accommodating Sturridge, Firmino, Coutinho, Lallana, Mane, Origi and so on and so on. I think my best three might be Firmino, Coutinho, and Mane, after that last performance, but I’m genuinely not sure. I decide to plump for that trio to start against City. I am nervous about this one: City’s midfield is talented but we can get through them, and a win would be a huge boost. 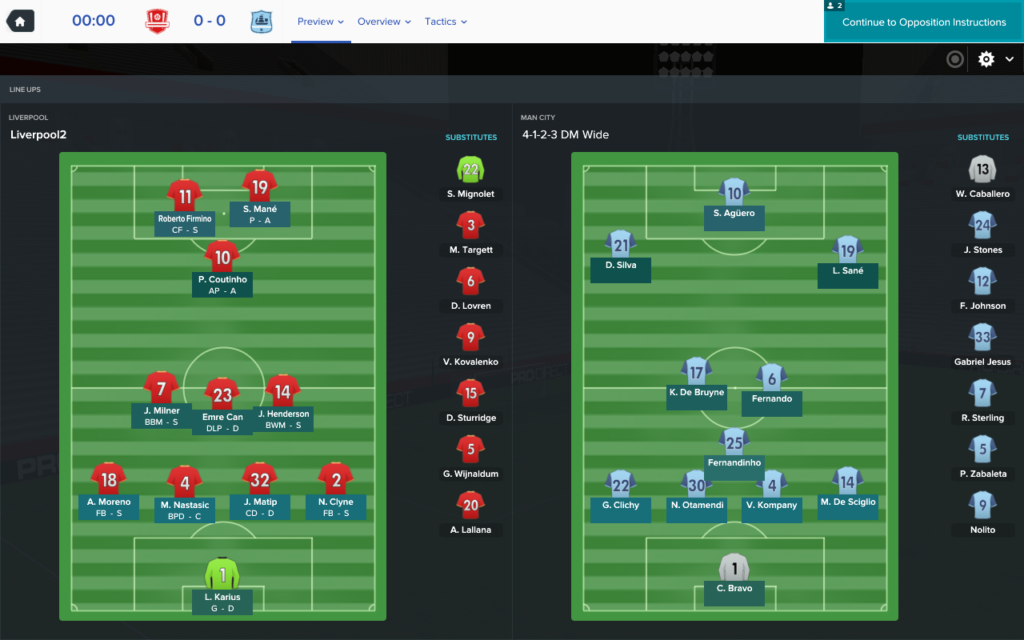 We start brightly and pile on the pressure, but don’t get the breakthrough until around half an hour in: 1-0, Firmino, from a Mane long ball. We continue to dominate but it’s very nervy. Finally, Mane makes it sure with one minute to go, driving forwards and curling his shot past the otherwise solid Bravo.

It’s a massive win. Massive. We had seven shots on target and Man City had none, which is the most pleasing aspect. We also kept them to 42% possession. We out Pep’d Pep. Crucially, we also stay two points ahead of Iain, and keep the pressure on United, Spurs, and, of course, City. The Board are now very pleased with me – I don’t blame them. 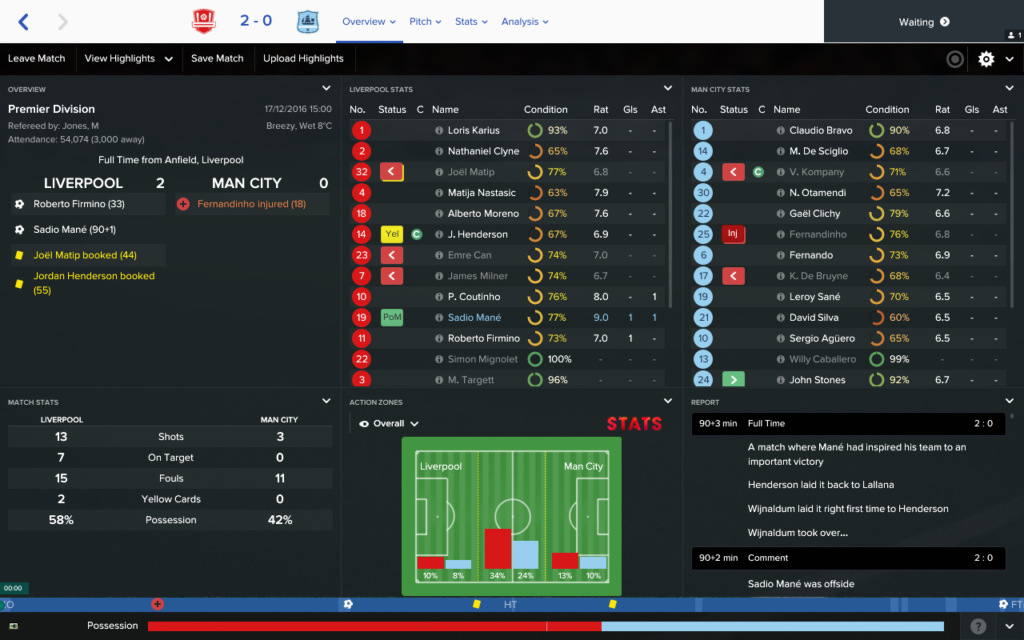 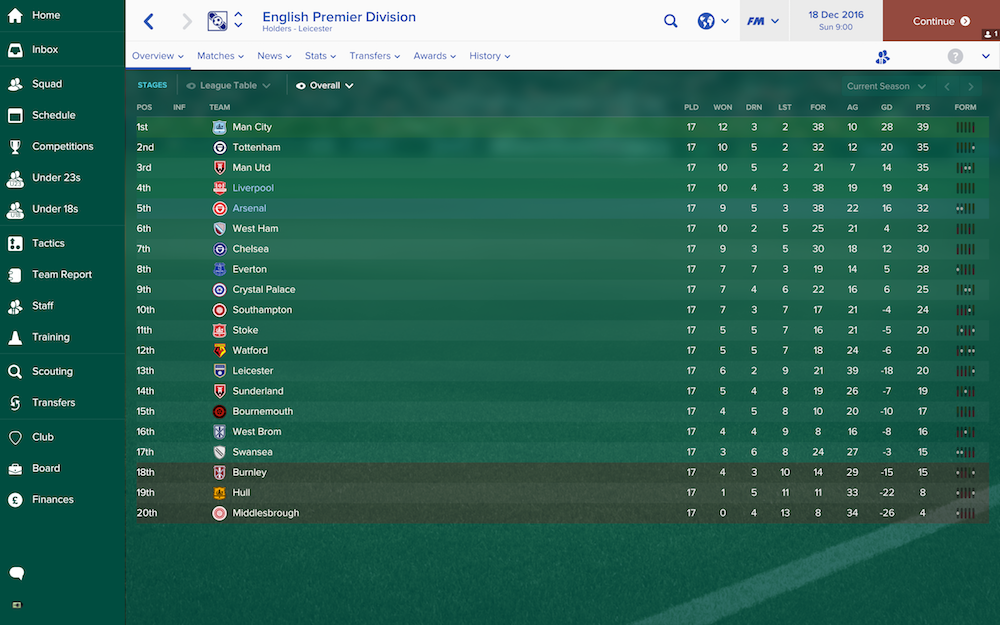 IAIN: We welcome Manchester United to the Emirates tonight and there are just a couple of problems. After what must have been quite the training session, we pick up two more injuries and that means that we’re now lacking Walcott, Cazorla, Giroud, Mustafi, Danny Welbeck and Per Mertesacker. Or as I like to put it; half the pissing first team.

Still, at least we got three wins down before this game. I may yet make it to the transfer window. 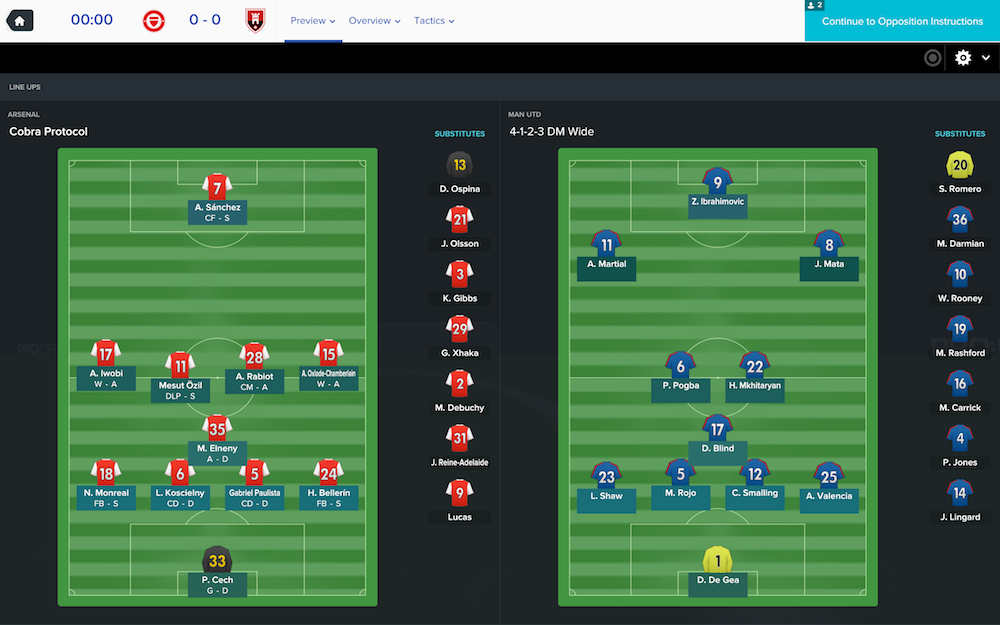 It seems that a familiar pattern is being played out when Iwobi, in the starting line-up because we have so many injuries that it’s either me or him and I forgot my boots, smashes a shot against the post in the first three minutes. Twelve minutes later, Zlatan Ibrahimovic puts United ahead. But if you’re watching the game, which you couldn’t do so you’ll just have to trust me, you can see that everything is in front of our defence. United are so ponderous and with the exception of that world class goal, they can’t find any gaps.

And so it’s not actually a surprise when Sanchez equalises on the half hour, it’s sort of expected. We’re the better team. Just before the hour mark, he scores again, prodding home a Bellerin cross.  We’re winning!

And this is the point where we usually fold. It is in this moment which has determined why we are an also ran and not a contender. But something weird happens. We don’t fold. Sanchez scores a ridiculous solo effort to make it three. And then he adds another, heading home from an Oxlade-Chamberlain cross. United are in disarray. We make all the clear cut chances, we hit the woodwork three times. Even Mesut Ozil, in his unfavoured deep-lying playmaker role, is having fun.

We win 4-1 and the only thing we’ve got to complain about is that we don’t get to watch a sour-faced Jose Mourinho explain it away with a combination of excuses that take in bad luck, injuries, an officiating conspiracy that somehow seems to follow him from one country to another, and excess fluoride in the water. 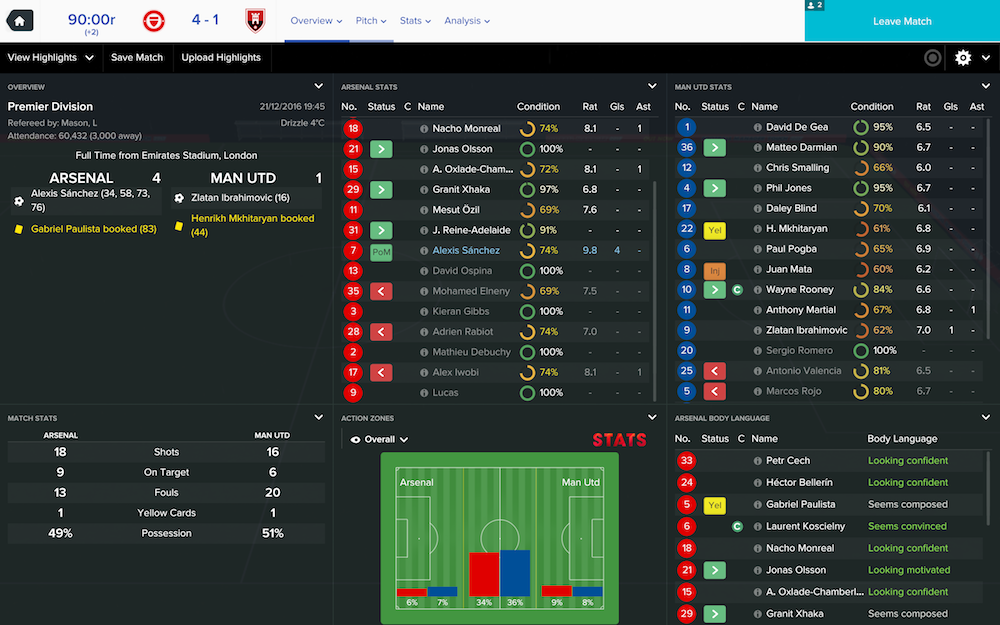 ALEX: Just as I think nothing could possibly dampen my day, Emre Can pops his head round the door to ask for a transfer to PSG. A) no offer has been forthcoming; B) he’s the only first team player averaging less than 7.00 other than Karius; and C) fuck off. He grumbles but I cannot see his concerns filtering through to the rest of a squad whose morale is now very high.

Next up, Swansea away. I change things around a bit, bringing in Sturridge, keeping Mane, and pulling Firmino back into the attacking midfield role. I’m keen to see what he does there, and I can’t drop Mane after his recent performances. Sturridge is stroppy about playing time too, so the balancing act must accommodate all that. Otherwise, we stay the same, though I do toy with the idea of dropping Can for sheer hubris. That can wait. 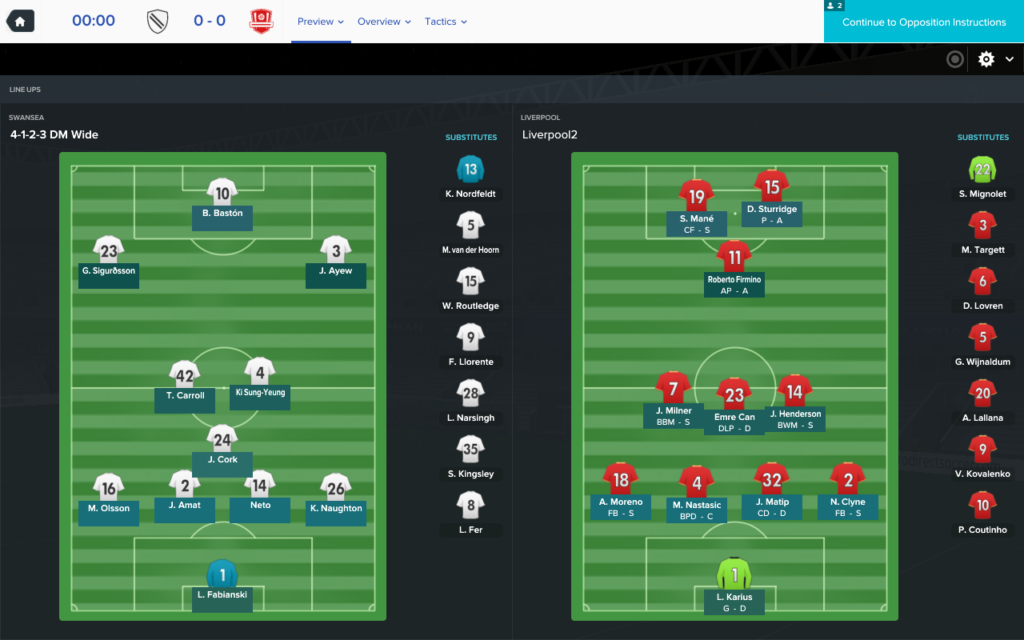 We look good in the south Wales drizzle, Mane having a goal chalked off for offside, before Matip steals ahead of a dormant Swansea back line to nod in a Milner free-kick. Sturridge adds a second from a Clyne cross. In the background, I hear Iain shouting, “Do you call that a high press? That’s not a high press!” He can only be talking about his own side, as we are doing very well indeed.

After half time, Mane gets a third with a nasty deflection off Amat. Iain is 4-1 up against Man United too. There is a sense of jubilation in the office. Milner finishes the 3-0 win as man-of-the-match with two assists. We have 14 shots, six on target, enjoy 67% possession, and complete 691 passes at 91%. Stuff like this makes me happy. It’s not just the win – it’s the manner of the win. We are 3rd and Iain is 4th, but we are both closing the gap on Man City and Spurs. 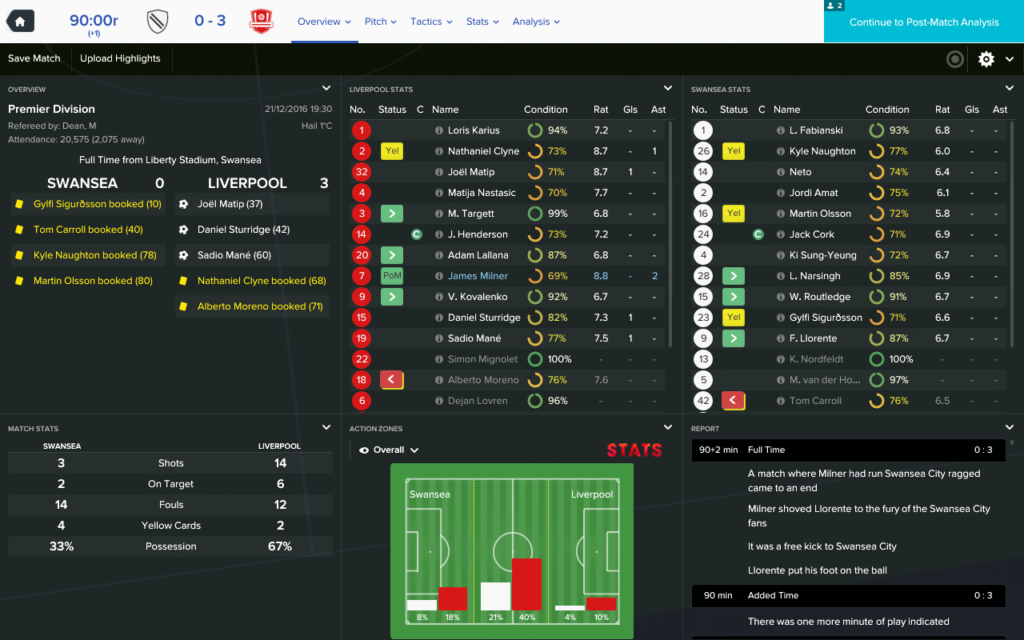 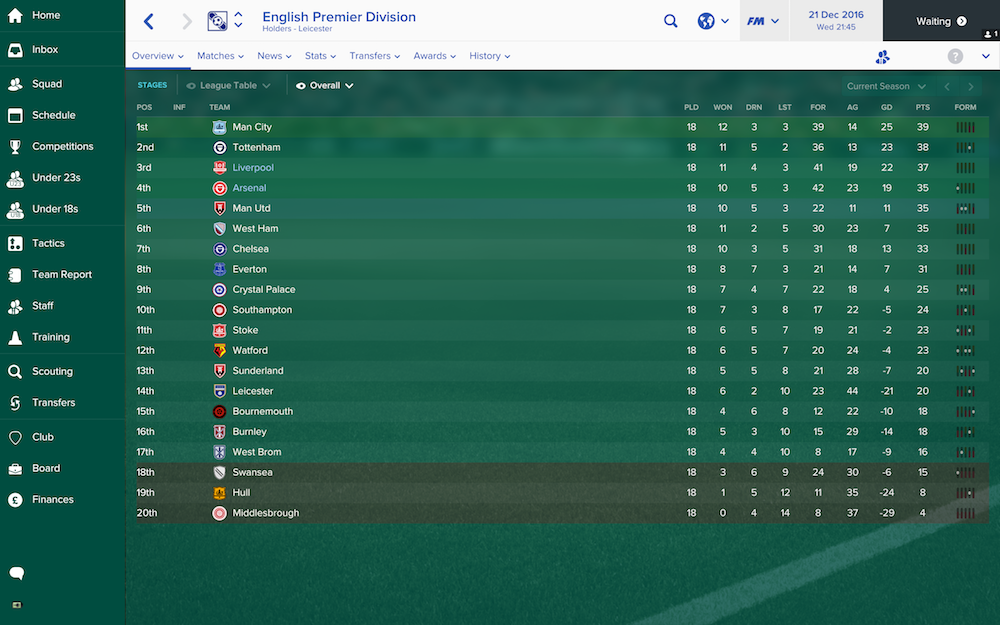 This would be more of a Liverpool thing. But under Alex, Liverpool don’t seem to lose anymore, so you’ll have to stick with me on this. I do not want to lose. Or draw. I like winning. It feels nice. So it’s Cobra formation again, and as few changes as possible. 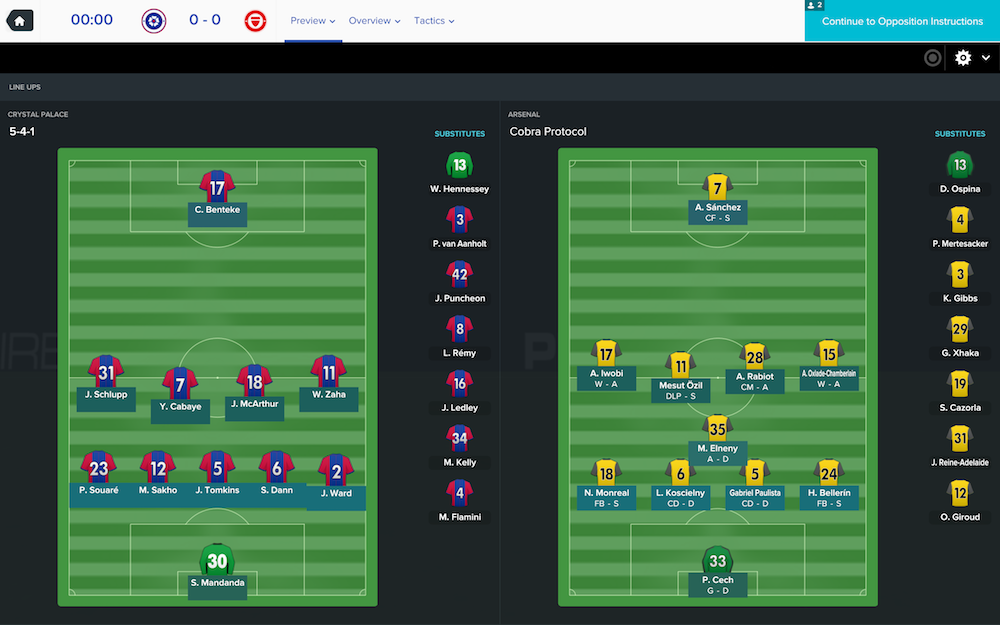 Sometimes, all you need in life is Big Sam. The Palace boss opts for a flat back five, four defensive midfielders and a very lonely looking Christian Benteke up front. As such, all they offer are long shots.

We, on the other hand, take the lead when Bellerin cuts the ball back to Ozil, and then we sit deep waiting for the chance to counter. There is no chance to counter, of course, because it’s Big Sam and Palace are content to sit deep as well, waiting for us to attack so that they can counter us instead. And if neither of us attacks then neither of us can counter and there won’t be any highlights and it will stay 1-0.

There is one highlight in the second half. It’s a Crystal Palace long shot. Petr Cech saves it comfortably and we win 1-0. Five victories on the bounce. And just imagine if Santi Cazorla had scored that penalty. This would have been the perfect month. I still don’t really know what to do with that tactics board. But I think it might be magic. 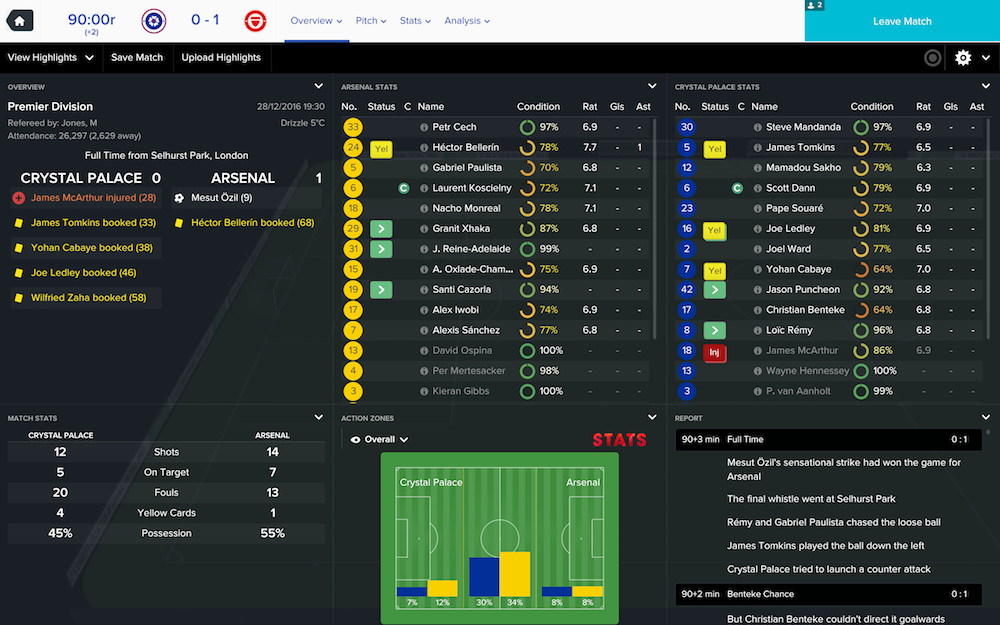 ALEX: Coutinho wants to leave for Bayern. OK, well we can cross that bridge if and when we come to it, but first there’s the small business of Chelsea at home. The Blues may be in 7th but they are good. They also play in a sort of 3-4-3 (more of a 3-4-2-1) and their width might cause us issues.

I have the confidence born of winning, though, and so I keep things as they are, only swapping out Firmino for Coutinho to keep the former fresh and the latter interested. 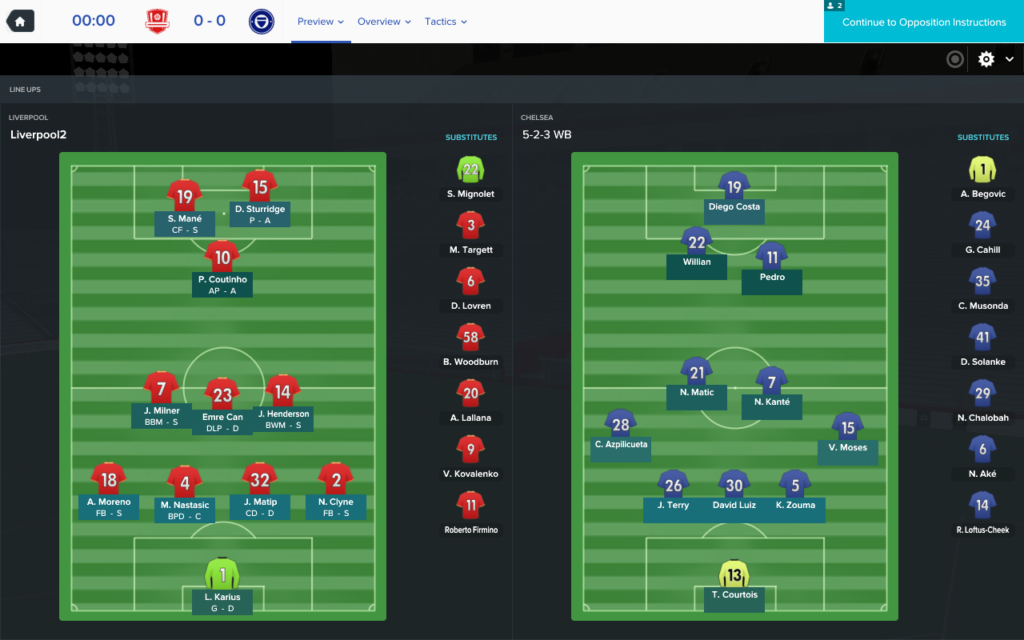 Sometimes, all you can do is sit back, watch, and enjoy. After 10 minutes, we are 3-0 up. Mane, playing as a false nine, has two. I love this team. I love that man. I love everything. I even love Iain.

The game stays that way until the end. I give Woodburn a PL debut and end up playing Lallana, Kovalenko, Coutinho, Mane, and Woodburn at the same time. It feels good to be alive. Our possession and passing stats are outrageous, we are attacking with verve and style, and I have a degree of certainty around my system and squad that Iain can only dream of. Roll on January. 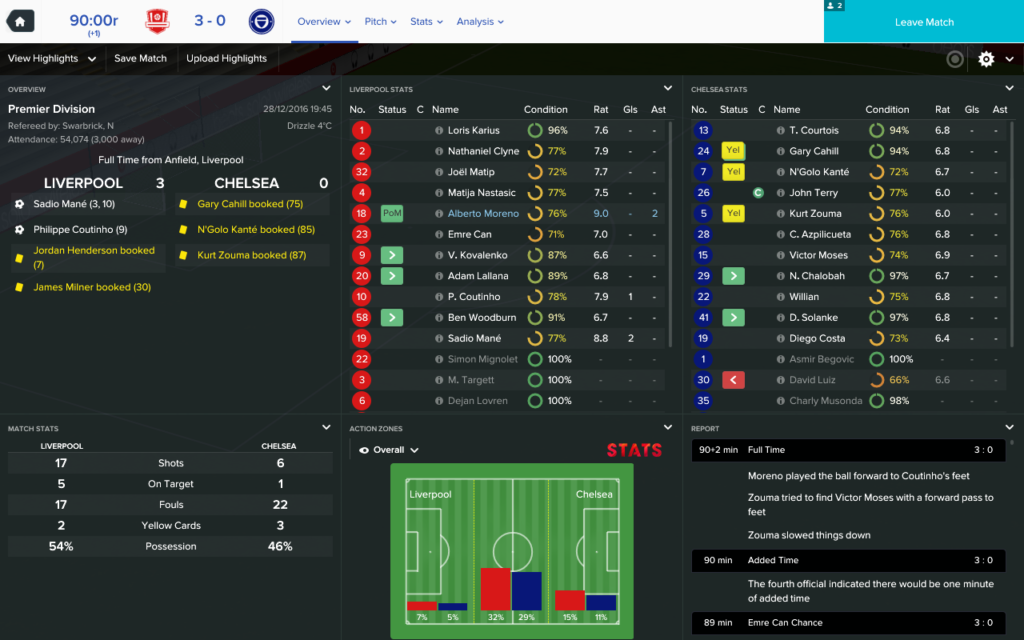 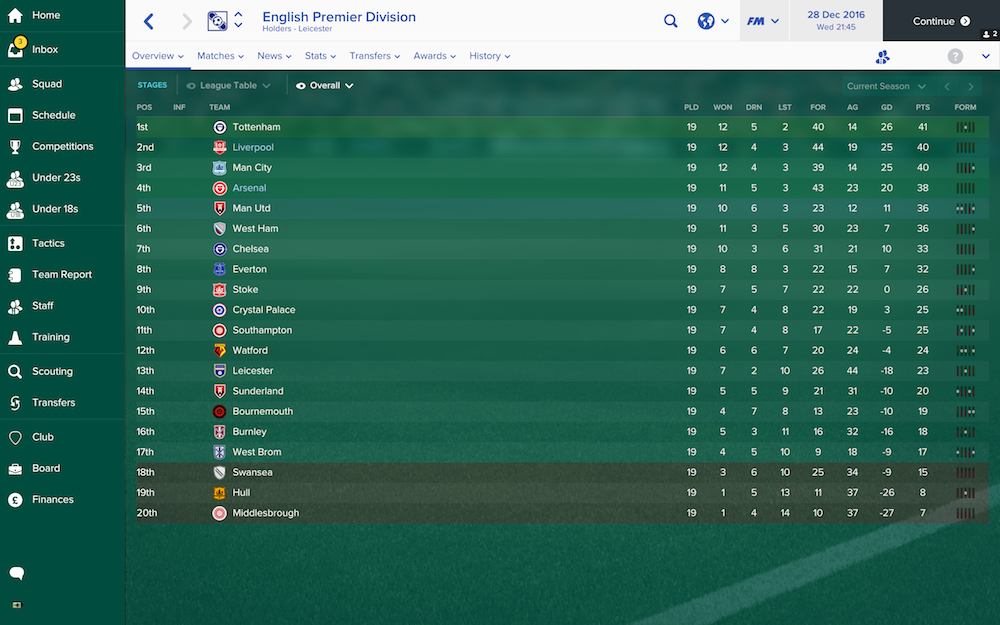