After three victories and one unfortunate gun/foot/both barrels moment against Watford, I think we can be content that we’ve made a reasonable start to the season. We have a squad as deep as the Mariana Trench, we have goals all over the team and we’re still turning a considerable profit. Not that fans seem particularly impressed.

Macintosh does well with squad he inherited, so promptly sells half of it.

However, I’m still very concerned about my players’ propensity to toss crosses in the air rather than along the ground. We’re set to low crosses, the wingers are set to attacking mode, the counter-attack is still bringing all the midfield boys to the yard, but every poxy cross is pinged in as if we’ve got Peter Crouch up front. And we need to sort it out because we’ve got Manchester City away.

Danilo is back from suspension, but Calum Chambers has been so good in his stead that he’ll keep his place for now. I’m tempted to stick with Oxlade-Chamberlain on the right, but Walcott scored for England in midweek and perhaps he’s learned his lesson. He’d better have done. 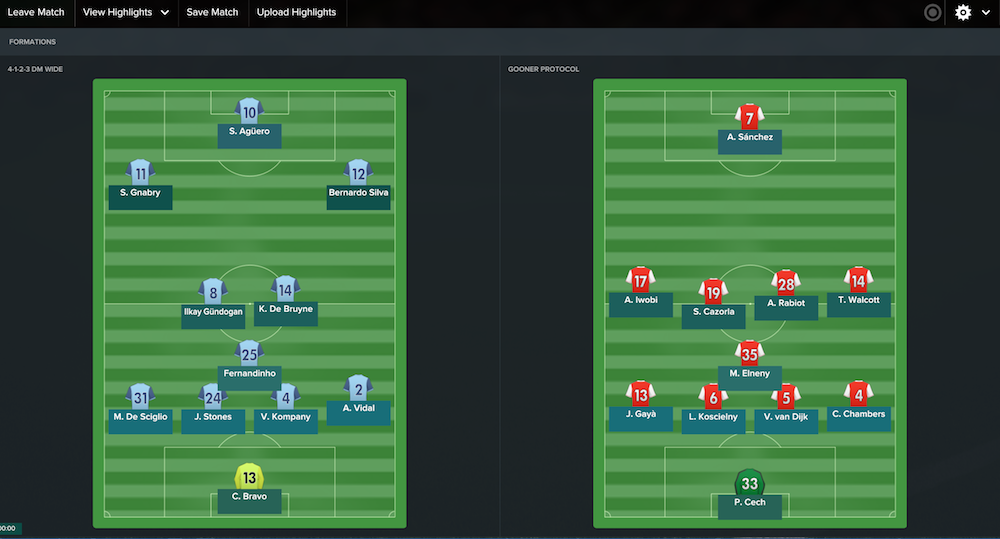 Awkward. City were, to use a very technical term, “better than us at football”. They also had an ex-player hellbent on revenge in Serge Gnabry, who scores two really good goals. After the game, I give Arsene Wenger a very, very old fashioned look.

After going behind early, we equalise with a penalty when Alexis Sanchez is felled by Vincent Kompany while trying to reach Walcott’s high cross. I suppose they have some use. We’re better after the break too, in that we stem the flow of City attacks, but we don’t make much for ourselves and I can’t really complain when Gnabry finds his way into the box and beats Cech from close range. We were really good away from home last season. That’s not the case anymore. 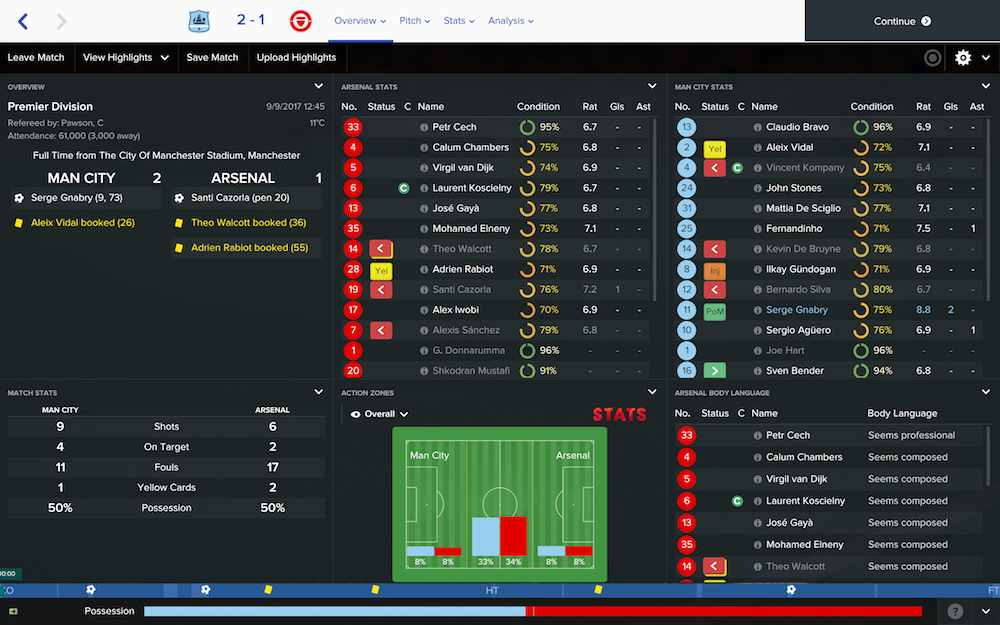 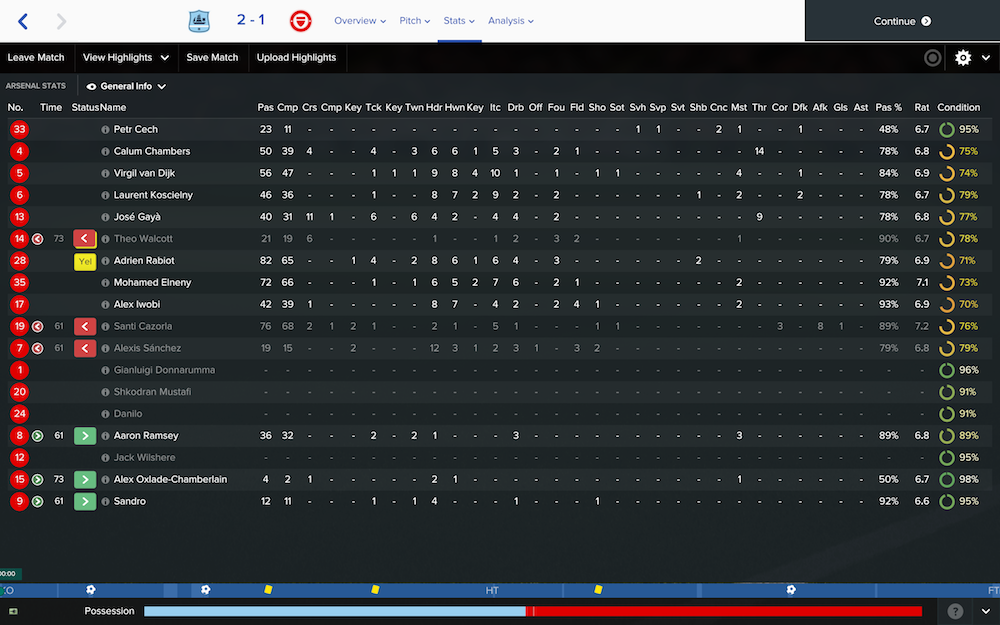 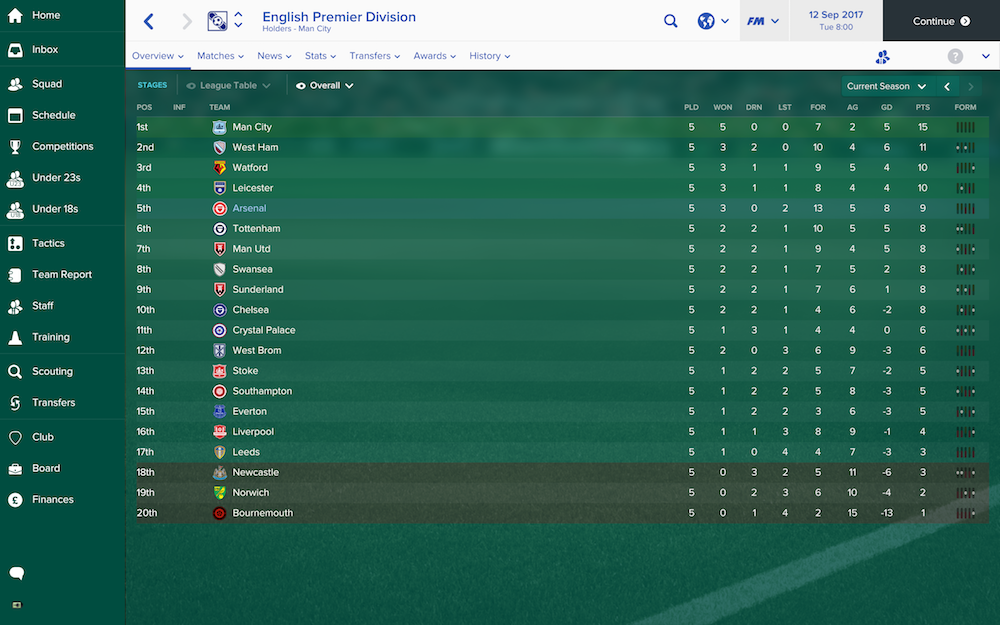 We need a response against Rapid Vienna, and we’ll have to get it from the fringe players. Despite not playing a game for the first nine days of September, we’ll have SEVEN in the remainder of the month and so we’ll need to marshall our resources carefully.

That means full debuts for Gianluigi Donnarumma and Sandro, along with starts for all the other squad members. Laurent Koscielny will captain the side. 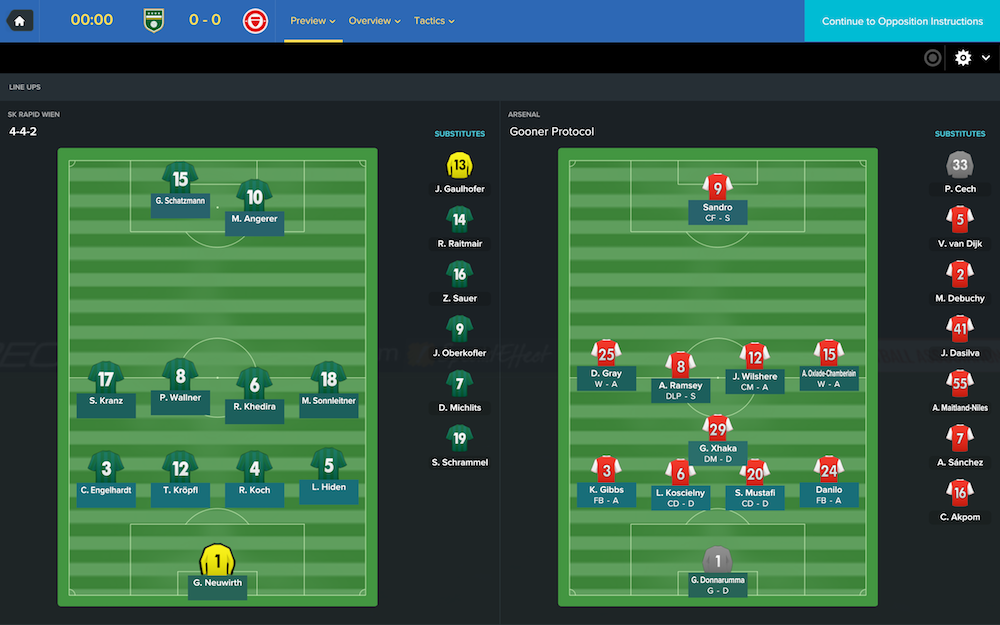 That was an entirely reasonable display, but God, I feel sorry for Sandro. He worked hard, demonstrated a splendid ability to turn on his heel and leave defenders standing, but unfortunately he just couldn’t score. I left him out there for the full 90 minutes in the hope that he would, much to the dismay of Chuba Akpom, but it wouldn’t go in.

Fortunately, Aaron Ramsey’s penalty did go in shortly after a first half that we’d dominated without scoring. Five minutes later Jack Wilshere, who was outstanding, capitalised on an error and doubled the lead. Unspectacular stuff, but given some of our away performances this season, I’m all right with that. 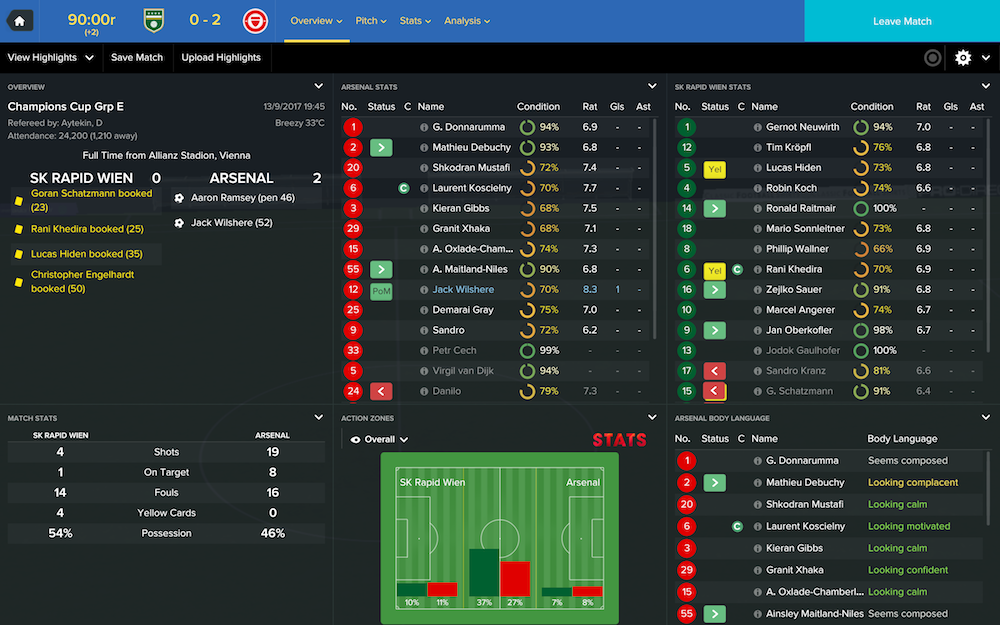 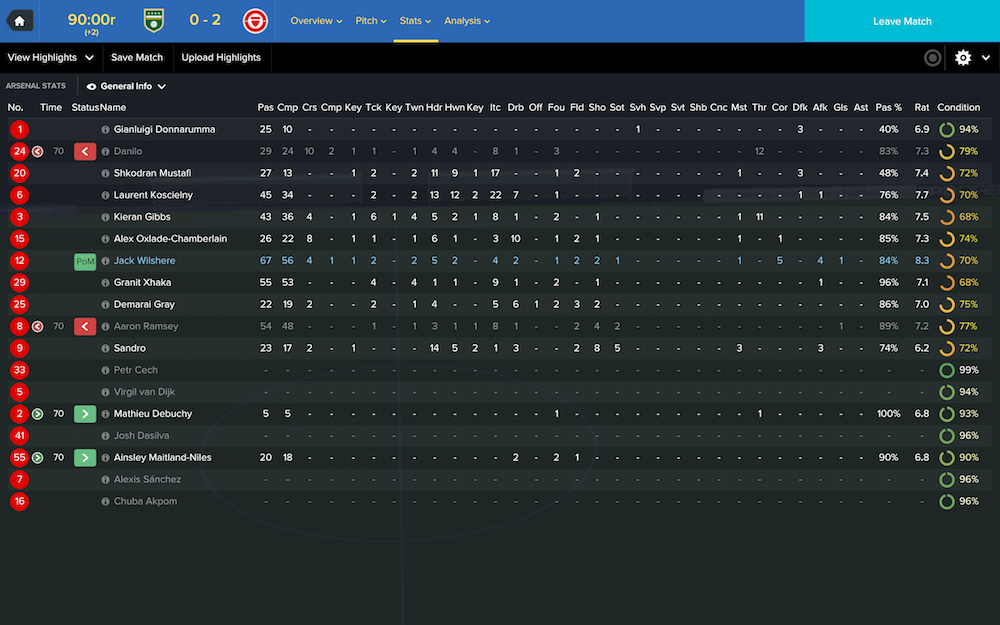 Having sat out the trip to Vienna, my first team is completely fresh for the visit of Sunderland, so I have high hopes. Assuming that we can learn how to do low crosses again. There’s only one slight tweak here and that’s the sight of Akpom on the bench instead of Sandro. This is my way of saying sorry. 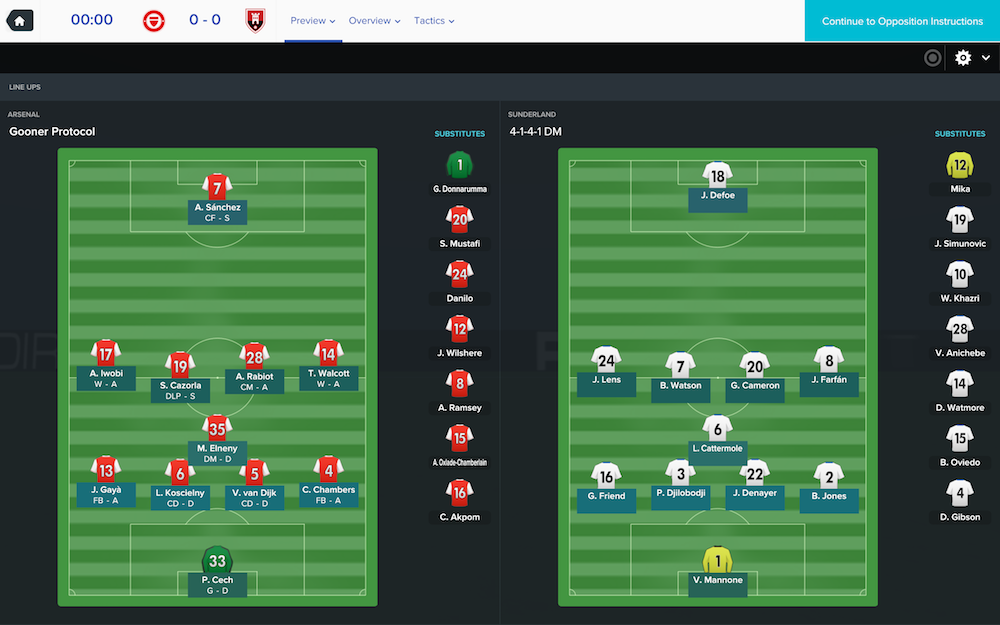 Gradually, we seem to be finding our way back. Sunderland were annoyingly plucky for much of the first hour with Vito Mannone, another hellbent ex-player, making three ridiculous saves. Noting that Sunderland were playing a very high line, I switched to Klopp Protocol on the half hour and was rewarded with a goal from Walcott, fed by the sixth assist of the season from the extraordinary Rabiot.

Sunderland were done after that, but still we wasted countless crosses by floating them in until the last 15 minutes when we seemed to finally get the concept. Sanchez added another with a direct free-kick and Iwobi smashed in a rebound after Mannone stopped Walcott’s shot. Hopefully, that’s the last of this high cross nonsense. 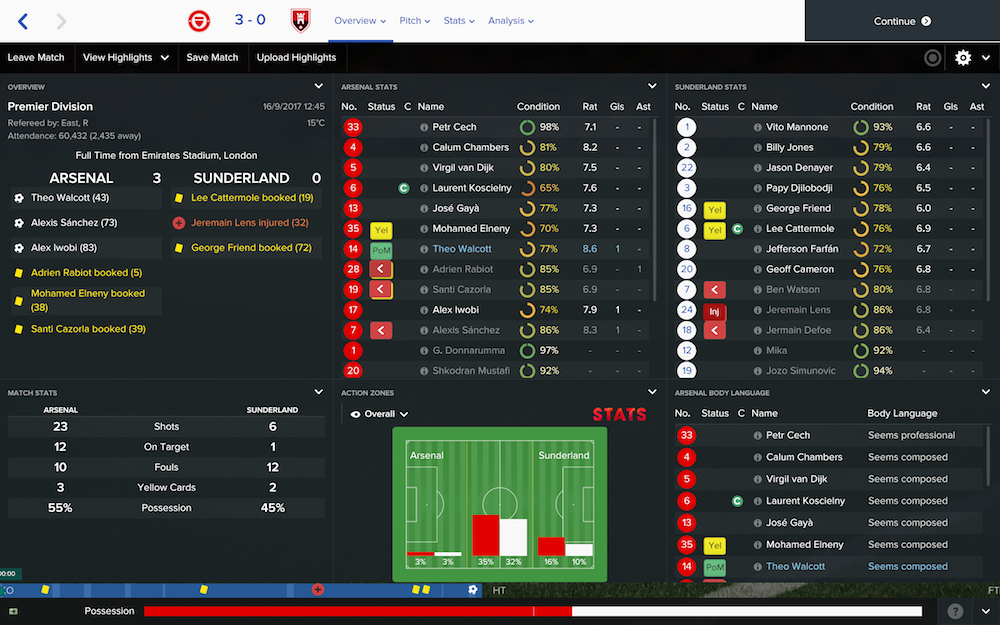 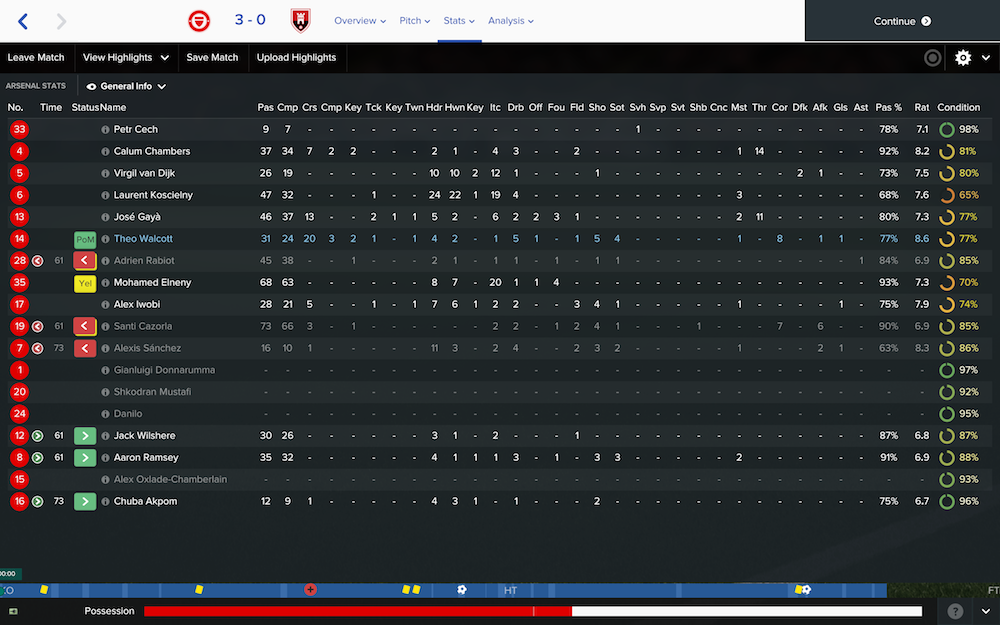 I am obviously going to play the back-up players against Coventry because any other course of action would be spectacularly stupid. But what back-up. I don’t think this second XI is that much weaker than last season’s first XI. It would be very nice if they vindicated my confidence. It would be even nicer if £28m Sandro would do a goal. Just to ease my concerns. 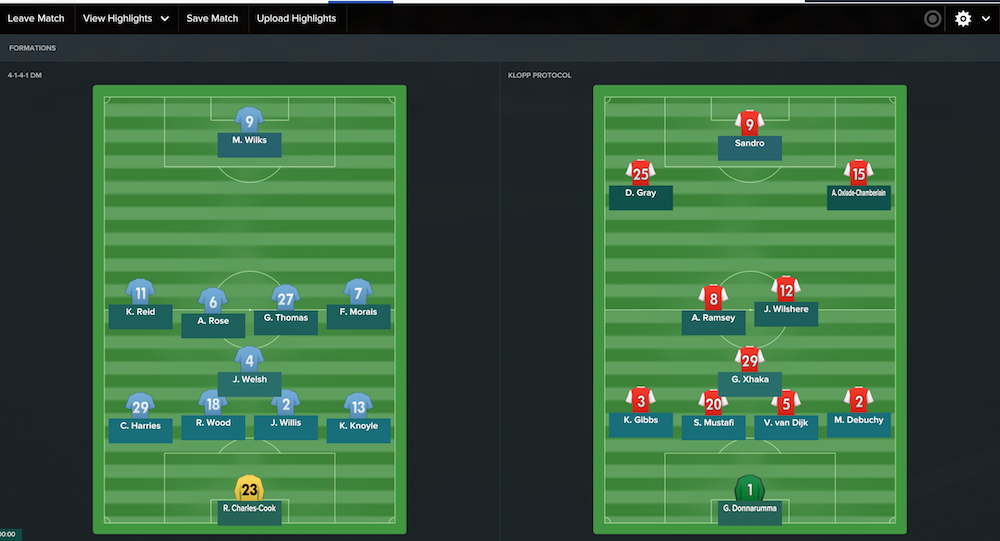 It takes 25 minutes, but Sandro finally opens his account with a terrifying volley from the edge of the box. It’s the third goal of a 3-0 victory and, while I’m a little disappointed that we don’t add more, it’s enough that everyone played well. It’s also nice to see Josh Dasilva making his debut in the second half. He wasn’t particularly good, but these little things are important to me. 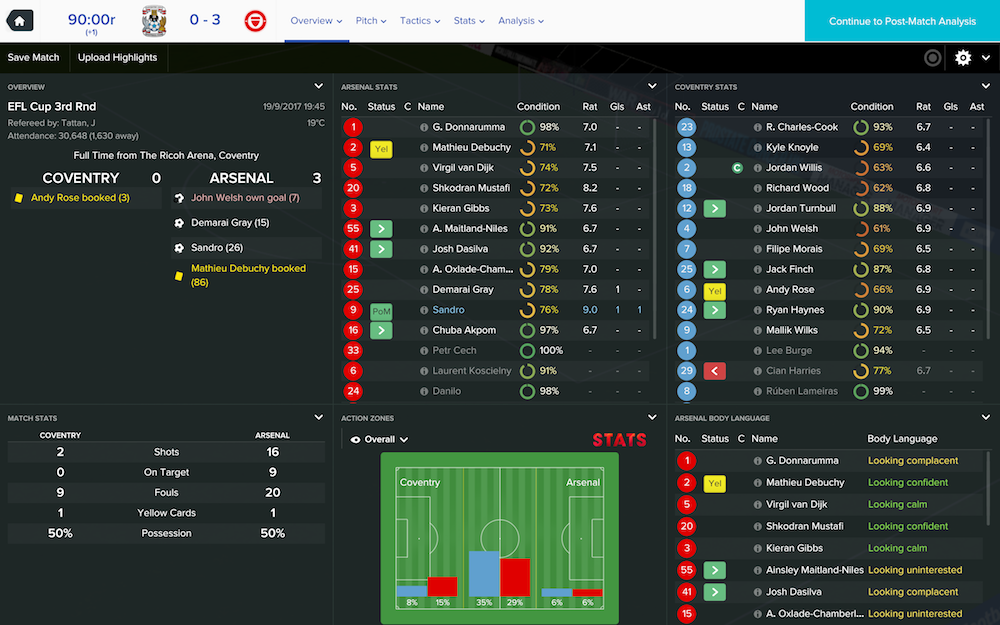 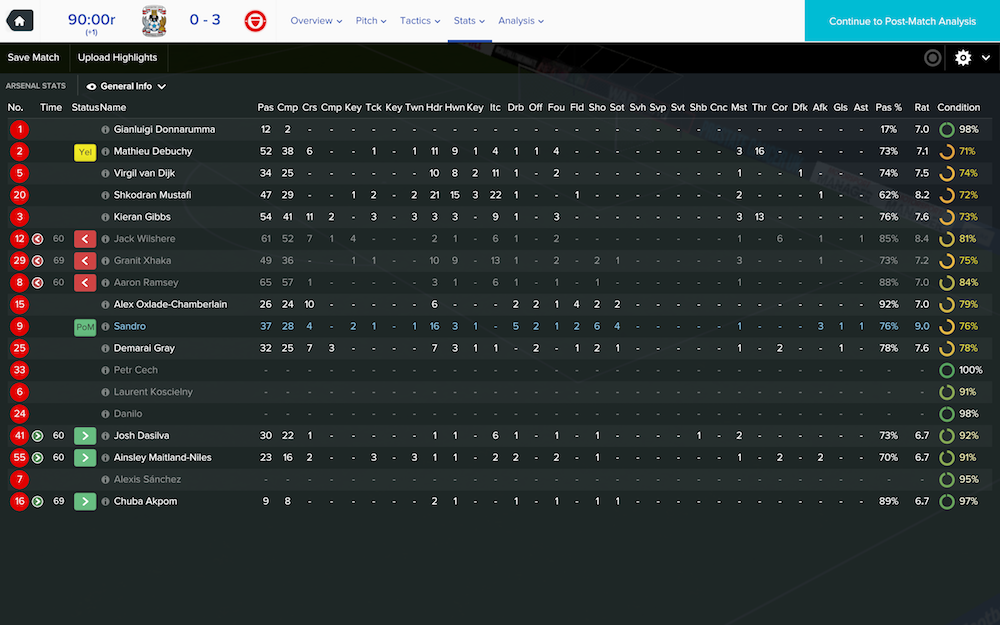 Now we have a decision to make. It’s Stoke away on Saturday and Internazionale at home on Tuesday. I think it would be remiss of me to send a weakened side away to the Potteries, even if I do think that it’s only marginally weaker than the stronger one. I think that’s the sort of experiment that would blow up in my face. So I’m going to take the risk of playing an almost-first XI with just a couple of minor changes. Let it never be said that I do not learn from my mistakes. 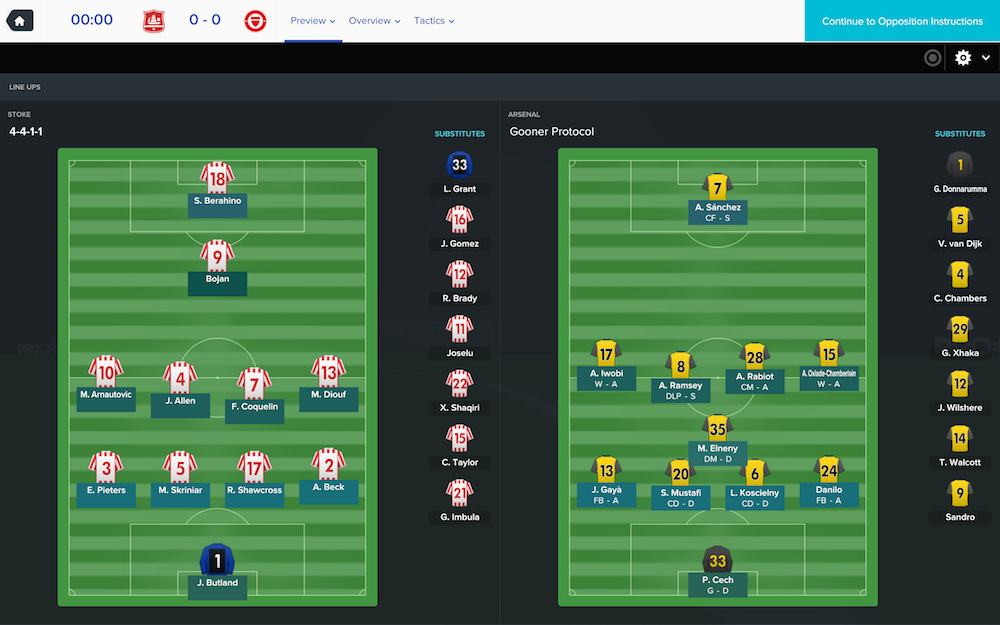 Aaron Ramsey is carried off after just seven minutes and will be out for six weeks. I am not amused by this, or by the way that Saido Berahino has three clear chances to score in the first 30 minutes. Fortunately, he spaffs two of them into the stands and the other off the crossbar. We’re not quite at the races and I make that point in colourful terms at half time.

Midway through the second period, Danilo smashes a cross *high* into the box that, predictably, Ryan Shawcross heads away. Fortunately, it’s only as far as Oxlade-Chamberlain who lashes it straight past his ears and into the back of the net. Another inappropriate cross, another goal. Is this progress?

As the game drifts away, I make three changes to keep the legs fresh for Inter and switch to Castle Protocol. Stoke get so frustrated with me shutting the game down that they pile everyone forward. It concerns me that I have better chances to score in 20 minutes of Castle Protocol than I made in 70 minutes with Gooner Protocol. So much so that I forget to take a picture of the league table. 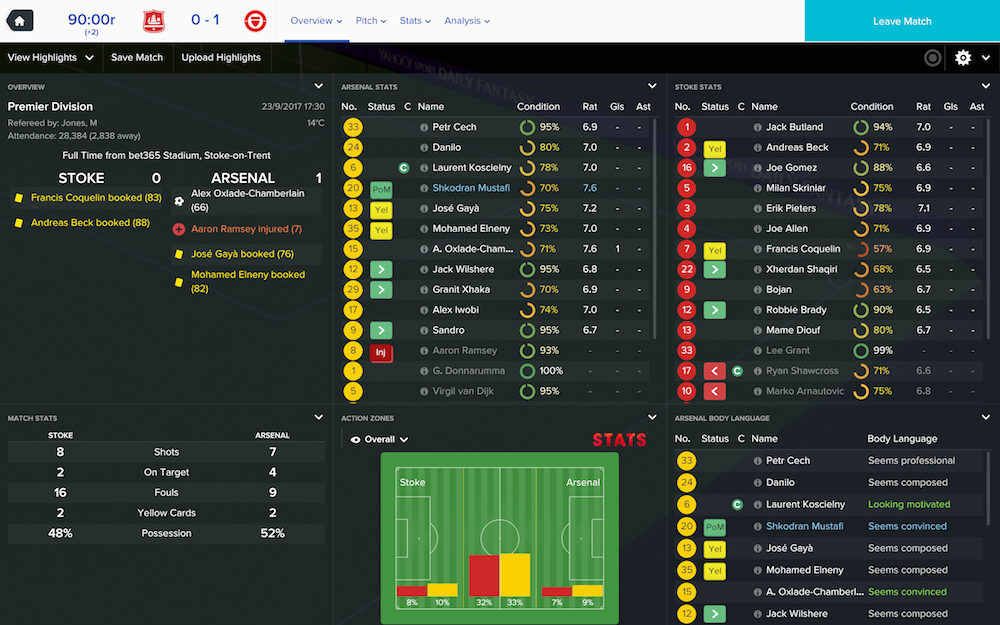 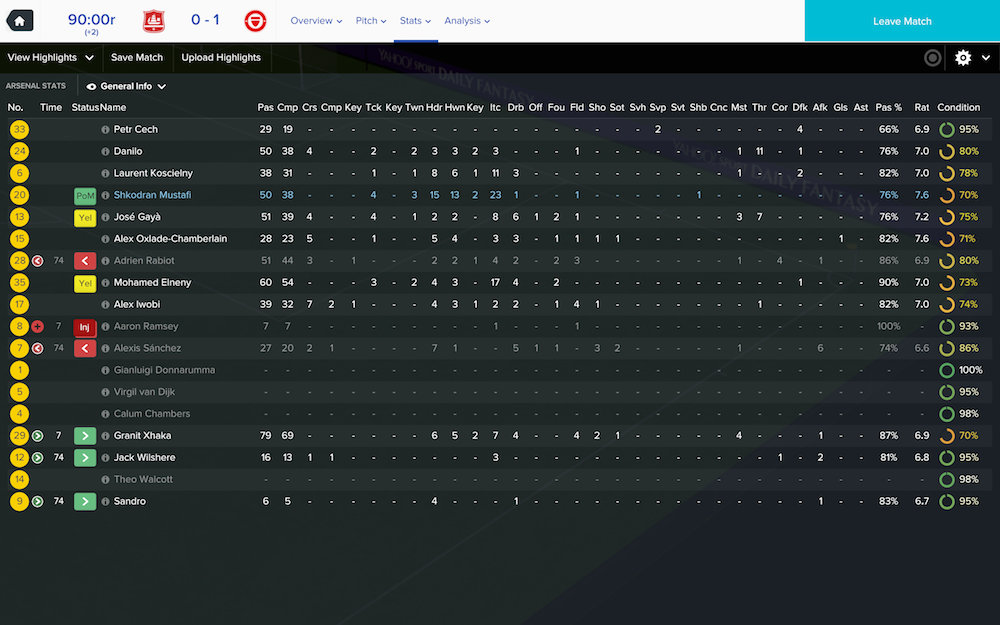 The trouble with selling lots of players is that it feels like every game reunites you with someone you told to get out recently. It’s no different with Inter, who have Olivier Giroud up front.

As for ourselves, we are pretty strong, Walcott comes in for Oxlade Chamberlain and everyone else is over 95% fitness. It’s Gooner Protocol again, because we don’t want to be silly, but I think we’ve got a performance in us, I really do. I don’t know why though. 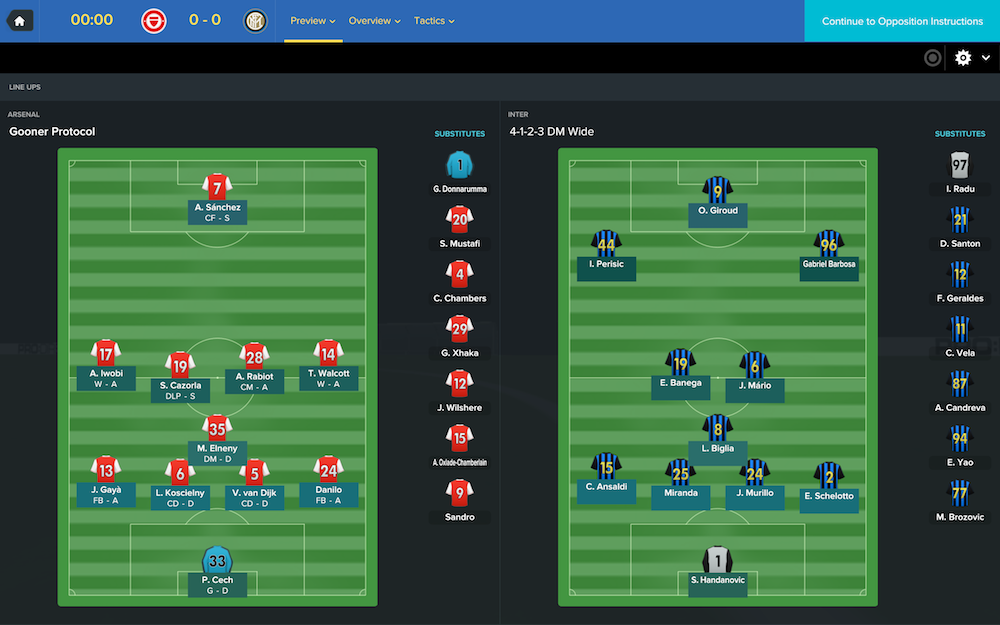 Now we’re talking. I think we can play better than that, certainly, but I don’t think we can play braver. Inter were good, they worked us hard, but we kept pushing away and we kept finding ways to hurt them. In more ways than one, given the broken nose that ends Giroud’s night.

It’s not until the second half that we make the breakthrough, serial goal-maker Rabiot turning scorer after a nice through ball from Cazorla. We’re comfortable after that and we make the game safe with five minutes to go when Sandro blasts home a late free-kick. But that felt good. We weren’t intimidated, we looked like the bigger side throughout. And, of course, we’re now nicely set to qualify from a tricky group. 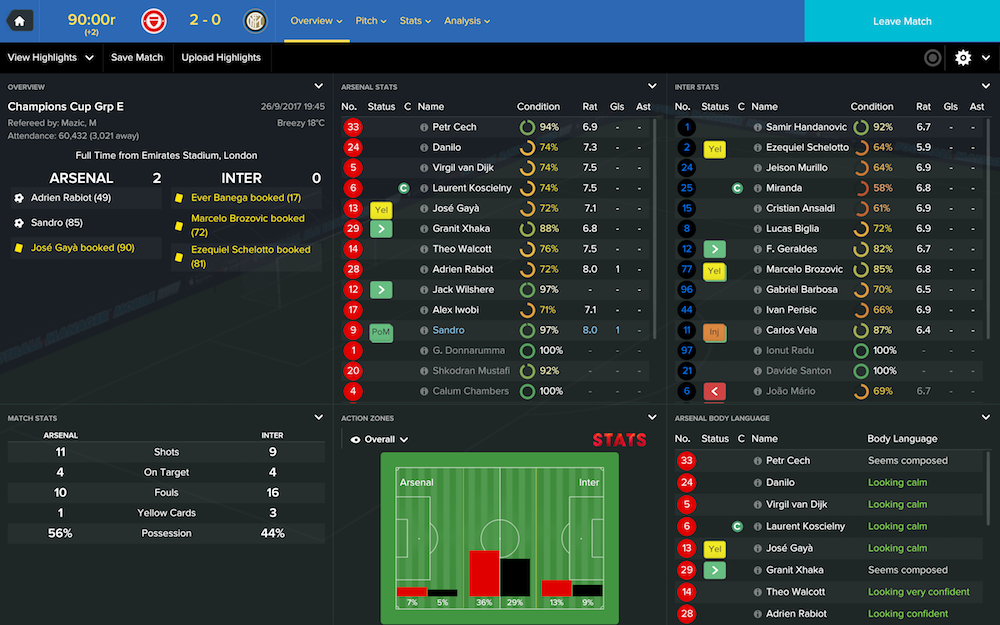 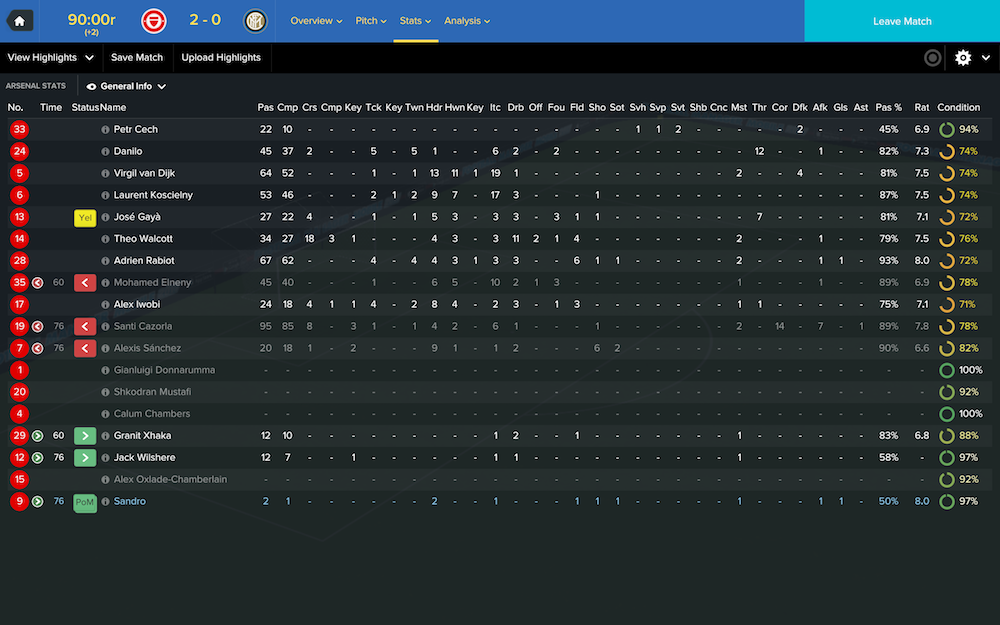 We end the month with a very tricky game indeed. Leciester have started the season well, they’re just above us in second. This won’t be easy, not least because of the tired legs in a squad facing a third big game in seven days. However, we’ll then have two weeks off for the international football, so I think they can get through one more game for me and then let their countries down later.

It’s Wes Morgan and Robert Huth at the back so I will physically tear the nutsack off the first man who thinks a high cross is the way to victory today. 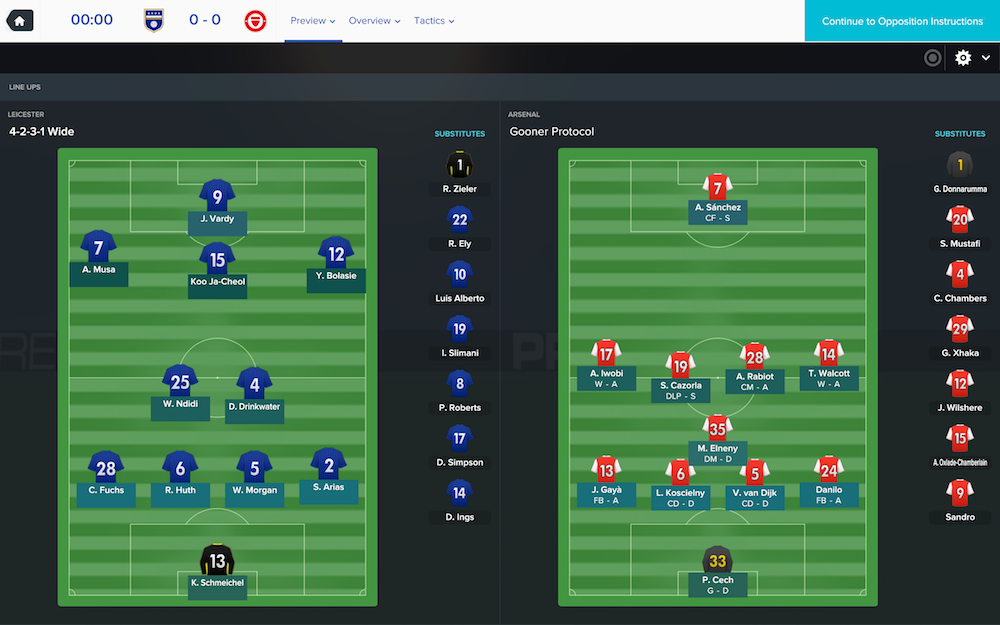 Sweet Lord, why are they doing this to me? What changed over the summer? Did they get bored with scoring all those goals? Did they feel pity to the Emirates Stadium cleaning staff and decide that they didn’t want to make more work for them by filling the trophy cabinet? Come here, Danilo. I’d say that this will hurt me more than it will hurt you, but I think we both know that’s not going to be the case. 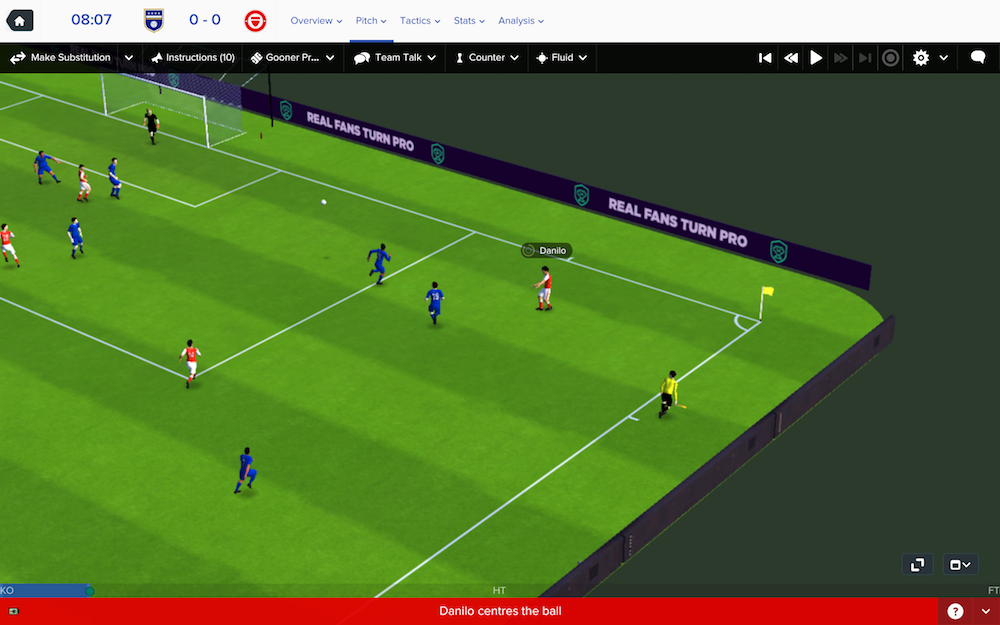 I wouldn’t mind, but a defence made up of Huth and Morgan is absolutely the sort of defence that will be torn apart by fast, low cross from the byline. And we play well in all other aspects of the game. We still make chances, we’re still frustrated by a fine Kasper Schmeichel performance. In fact, I’m just in the process of telling myself that an unfortunate draw away at Leicester isn’t that bad a result over the course of a season when Koscielny underhits a backpass to Cech and Patrick Roberts steals in for a late, and entirely undeserved winner.

It’s not even October and we’ve managed to lose three times away from home. I need to go for a walk. 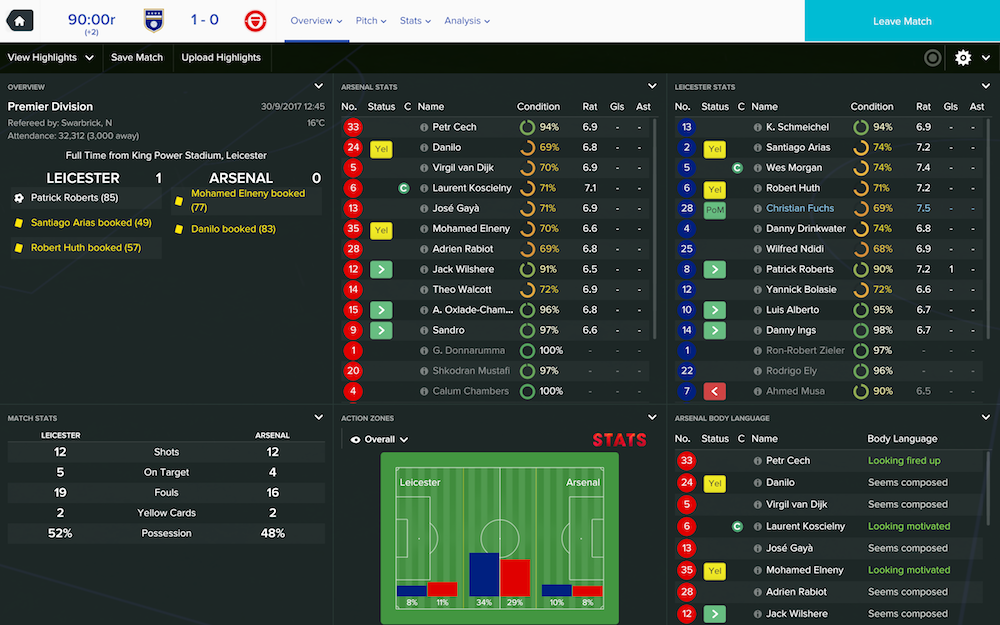 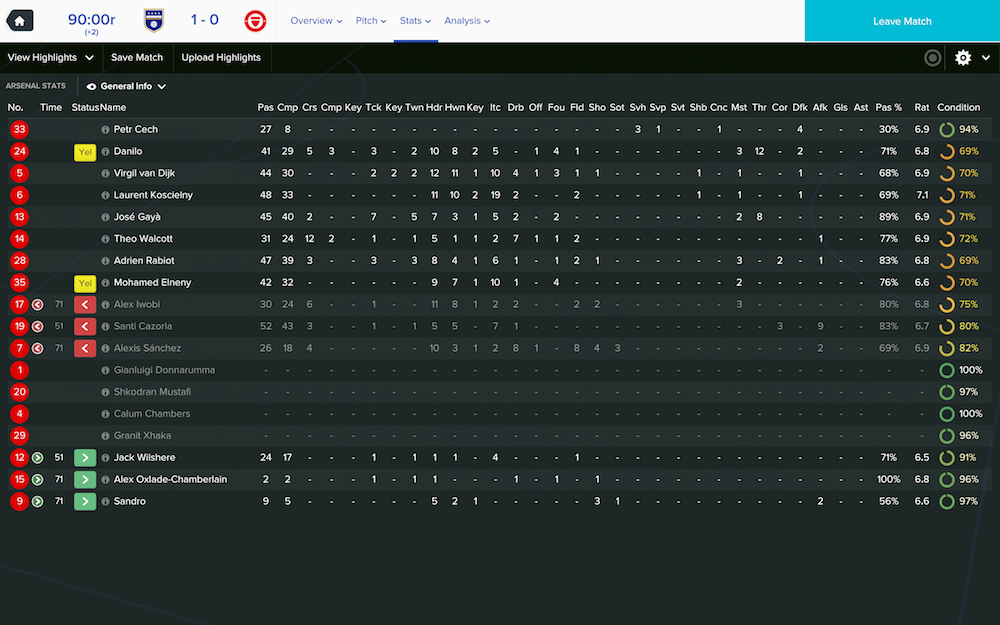 This is really very frustrating and I’m starting to see why Arsene Wenger gets through so many water bottles. We’re almost there. We’re so close to being good. We just can’t make that final step at the moment. And if they can’t follow my orders to provide low crosses, I’m going to have to think about adapting the tactics in an effort to find something they will do… 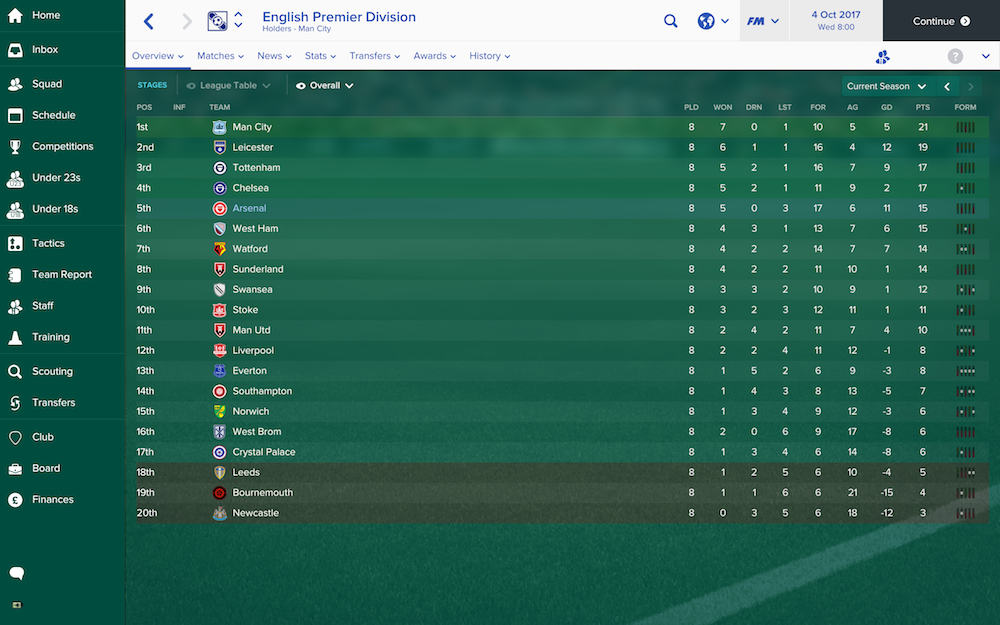