IAIN: I believe that every game of Football Manager you play infects you with some of what it is to support the club you manage. For example, after my CM01/02 adventures, I am now living with early stage Everton. I’m not full blown, I can still live a relatively normal life, but it’s in there, somewhere, pulsating and growing. I try to keep busy. It’s best not to dwell on it.

Arsenal’s trip to Stoke only emphasises the point. I have nothing against Stoke in real life. I’ve always been made to feel very welcome on my trips to the Potteries, the supporters are always nice when I voxpop them in the car park, but now I feel…incensed. I feel militarised. I feel a strange urge to protect Aaron Ramsey for some reason. Odd.

But let us turn to happier themes. Theo Walcott is back! Mohamed Elneny is back! Neither of them will start because I don’t like to change a winning team! But God, we’ve got some strength in depth now. I can’t even find a place for Danny Welbeck on the bench. I have to be honest though, I’ve had worse problems. And it’s not a bad time to be at full strength. 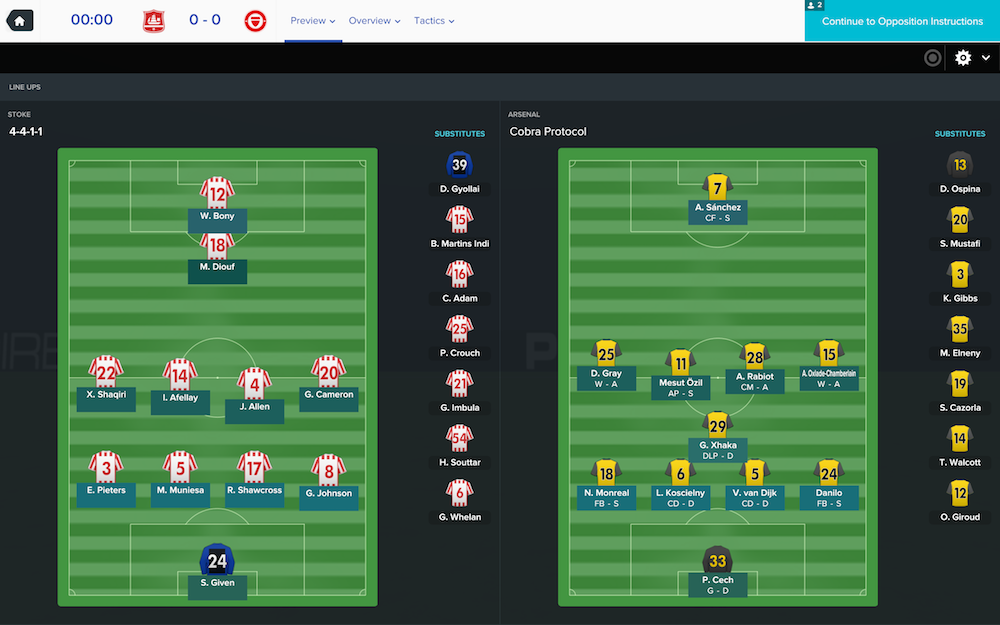 Two clear cut chances, two half chances, 19 shots in total and not a single goal. Well, not a legitimate one. A second half Alexis Sanchez drive is ruled out for offside. For the third game in a row, we keep a clean sheet after 90 minutes in which there was never any danger that it would be sullied.

Defensively, we are getting better and better. But it’s a little annoying not to match that proficiency at the other end. I know what you’re thinking; he’s playing 4-5-1 counter attack, of course he isn’t scoring. But we’re making chances. Oodles of chances. We’re just not scoring. 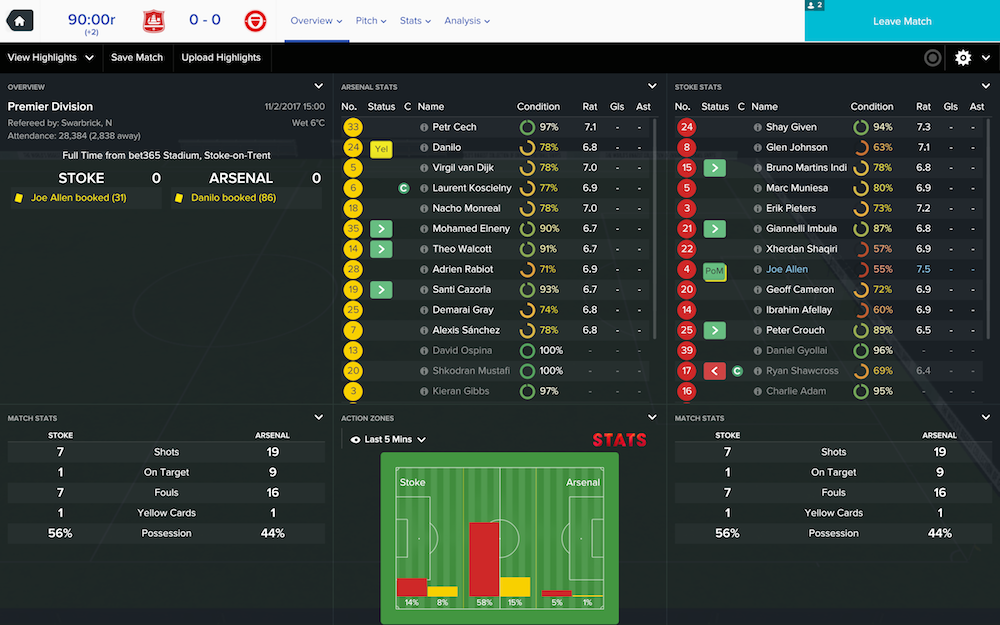 ALEX: And then a ray of light, as Matip and Mane return from AFCON duty. Mane’s performances in the false nine role have been nothing short of bae, and Matip is quick and solid and works very well alongside Nastasic.

Our next game is West Ham at home and I am shocked to discover that Slaven Bilic doesn’t like me. He doesn’t like me one bit, and goes all out in his press conference to explain this. I don’t rise to it, because having looked Slaven in the eye once before, I don’t think it’s a good idea. I’ll let my football do the talking… 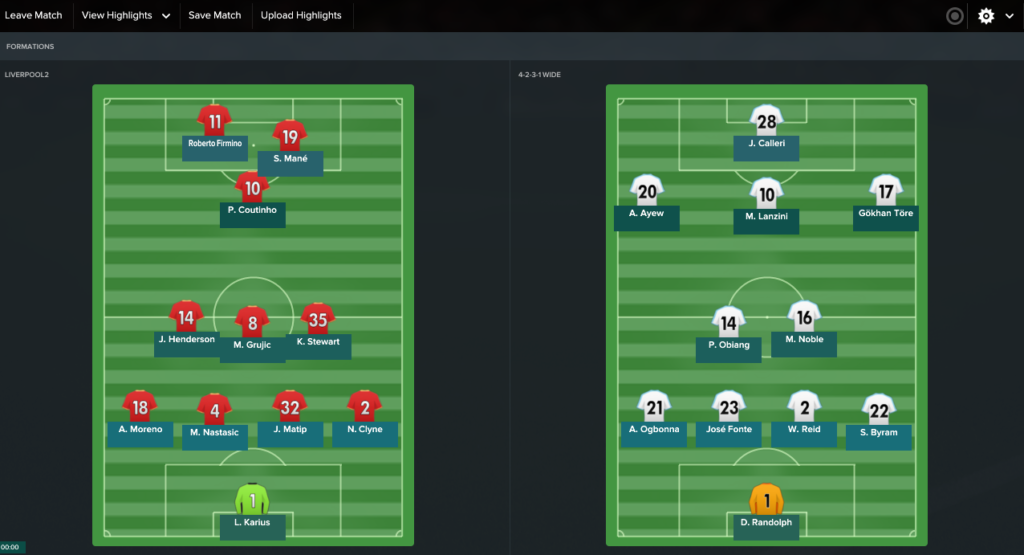 In fact, my football doesn’t talk – it shouts and screams and possibly dances naked in the street. We open the scoring and it’s who else, but the returning Mane? He runs clean through on goal but Adrian scrambles clear, only for Stewart to gather the keeper’s clearance and chip it back in to Mane, who heads in. The main Mane is back.

Minutes later, he’s at it again, clipping in Clyne’s cross at the near post. And then Matip scores directly from a corner and it’s almost like we were really missing these two in our last three games. 25 minutes and Mane gets his hat-trick when Ogbonna fouls Moreno and we win a penalty.

Ogbonna then fouls Matip for a second penalty, which Firmino scores high and to the keeper’s left for 5-0. It’s not even half-time. Grujic is sent off in the second half for two yellow cards. The sixth goal comes from Henderson, following up after Kovalenko hits the post. 6-0 and STFU Mr Bilic. 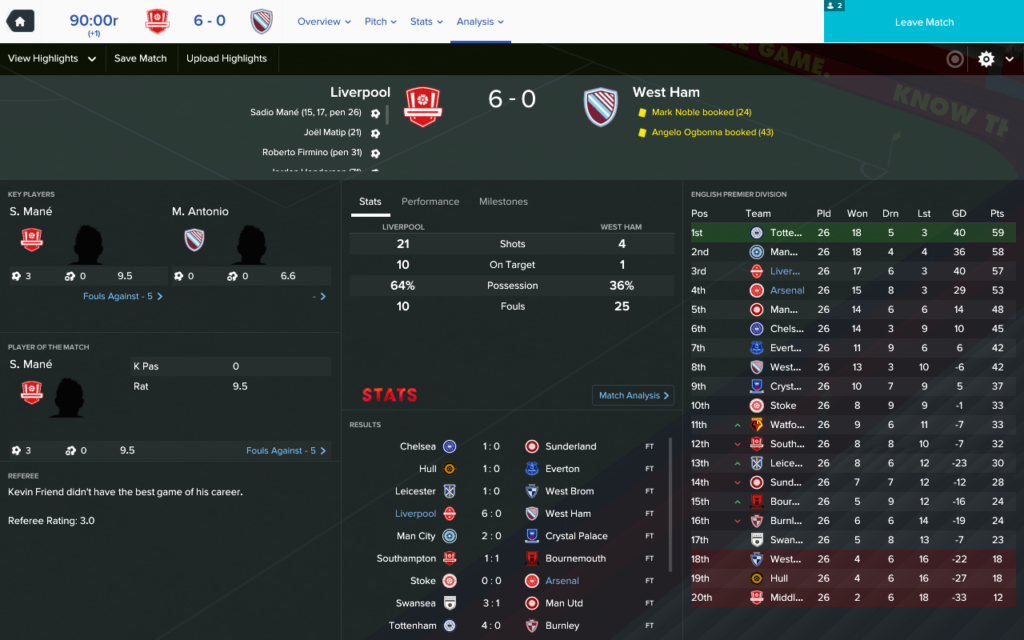 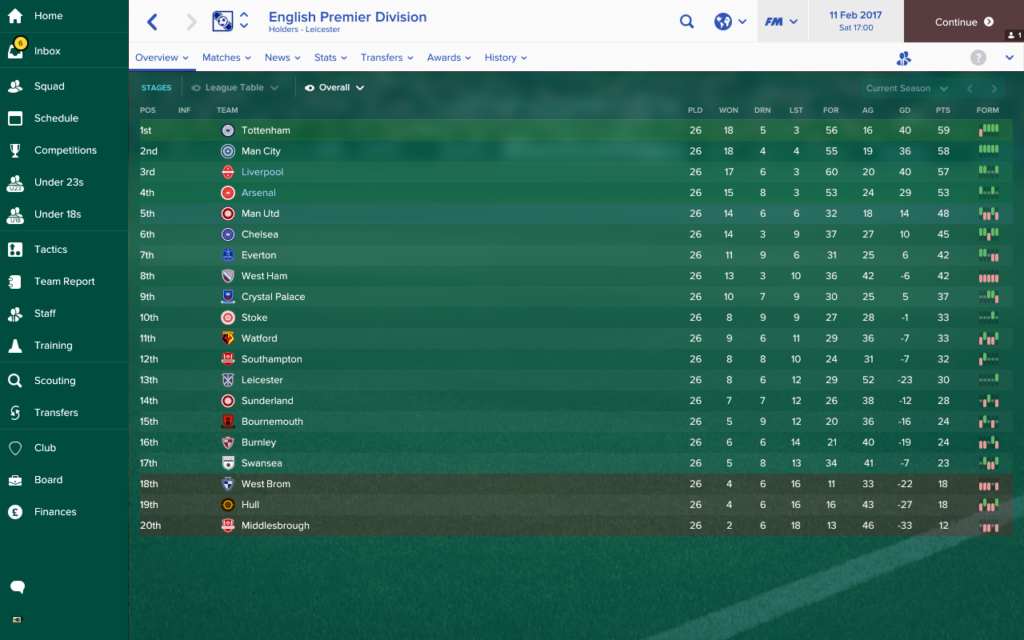 IAIN: We’d better shake of our habit of wasting chances now we’ve got Europe to conquer. Stop laughing. We’ve probably been quite fortunate to end up with Olympiakos in the first knock-out round, but this is Arsenal so it’s best to think that and not say it.

Mind you, what an opportunity, eh? If we can secure 4th place *and* get to the last eight in the Champions League, that would represent progress, wouldn’t it?

I think there’s lots of space to exploit in that Greek side, so naturally there’s no need to change from Cobra Protocol. Sit tight, win possession, snap out, score goals. This is what we do. Well, it’s what we used to do. We haven’t done it since the end of January… 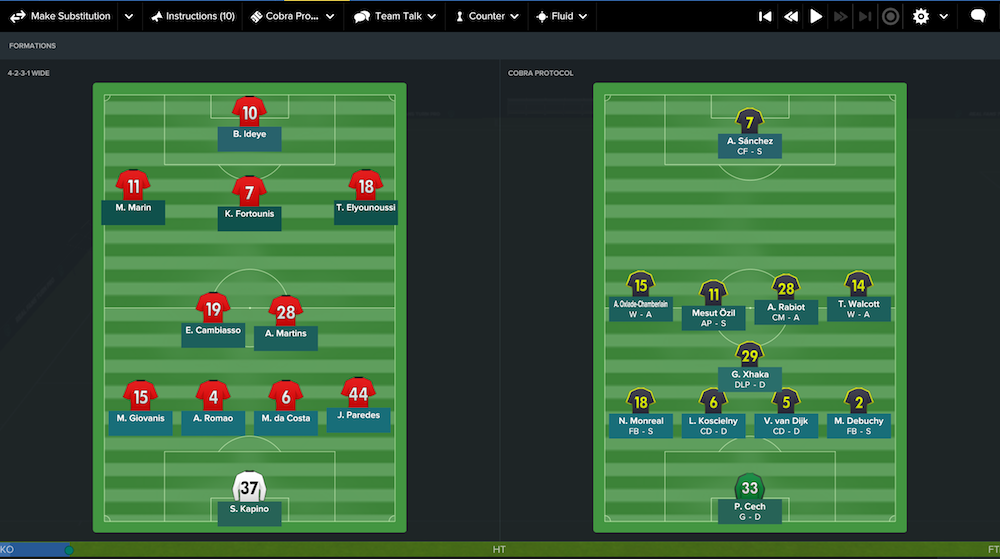 This is getting beyond a joke now. 18 shots, three clear cut chances, two half chances and a missed penalty. We’re one down in the first half when the drawback to our frantic pressing is highlighted once again. As we harry them, they pass the ball amongst themselves happily for ages, then twat it past Petr Cech from 35 yards.

We have a perfect opportunity to level shortly afterwards when we’re awarded a penalty. Mesut Ozil takes it. Mesut Ozil misses it. I make some vocal observations on Mesut Ozil’s character, his strength of mind, his parentage and his career prospects and Alex feels compelled to leave the room and let me get through this on my own. It’s a wise decision.

Ozil makes amends eventually, slamming home a free kick and we go on to have our customary medley of missed opportunities before time runs out on us. An away goal isn’t to be sniffed at, but God, we’re better than this, aren’t we? 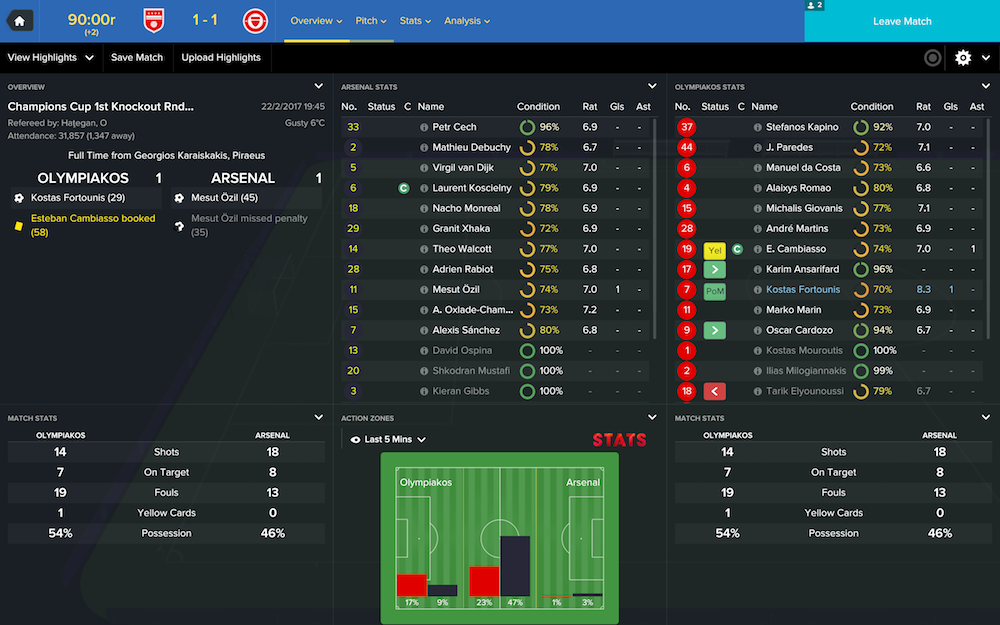 ALEX: Slaven Bilic goes on a rant, saying I’m “bang out of order” and “unprofessional”. 6-0, mate. Fourteen unbeaten games on the trot. 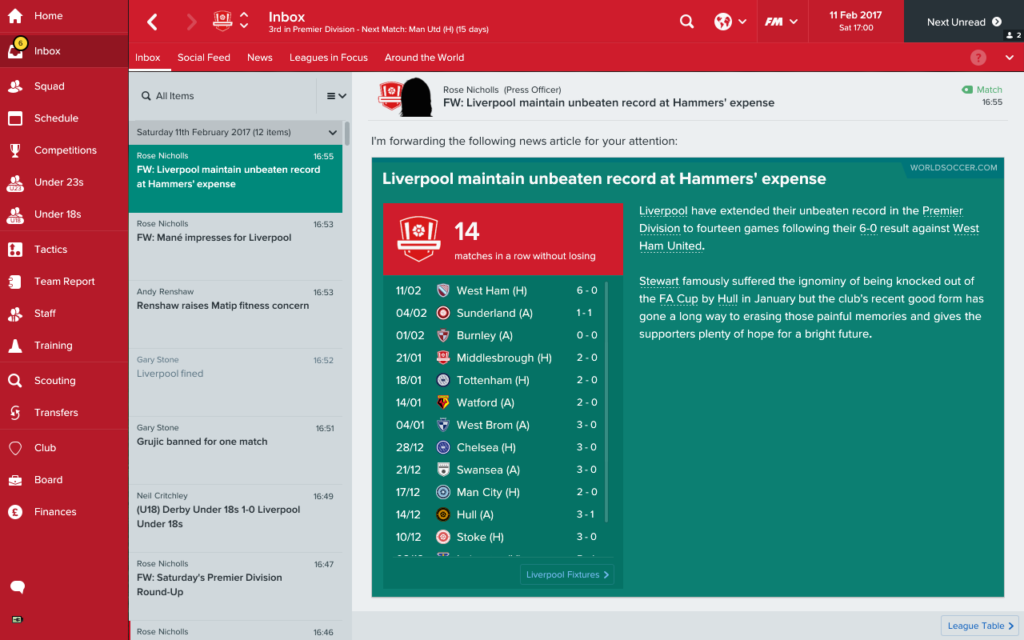 We’re still down in 3rd, though, after the draws against Burnley and Sunderland, but our goal difference now compares favourably to everyone else’s and is level with Spurs, which could help come the end of the season.

It’s not all good news, though, as I have yet again personnel issues with which to contend: Mignolet thinks he’s not up to the standard required (unlike many of you), and asks to move on for the good of his career. It’s a fair comment and I am happy to list him, especially as he wouldn’t actually go anywhere until the end of the season as all windows are shut. But the constant interruptions of players who are not happy is a grind I could well do without, especially with the month’s final fixture against Manchester United at home. Before then, I do get to eavesdrop on Iain guiding his boys to a 1-1 draw against Olympiakos and, let me tell you, dear reader, he does not like Mesut Ozil one bit.

Anyway, at home to United, and Mourinho says he can’t wait to beat me and then singles out James Milner as a weak link. I’ve personally never seen the point of targeting an opposition player in a press conference, mostly because it makes me sound like a bellend.

Grujic is suspended and so Wijnaldum takes his place as the deep-lying playmaker; otherwise, we are full strength and first choice. It’s 3rd vs 5th, but we all know it’s much more than that. 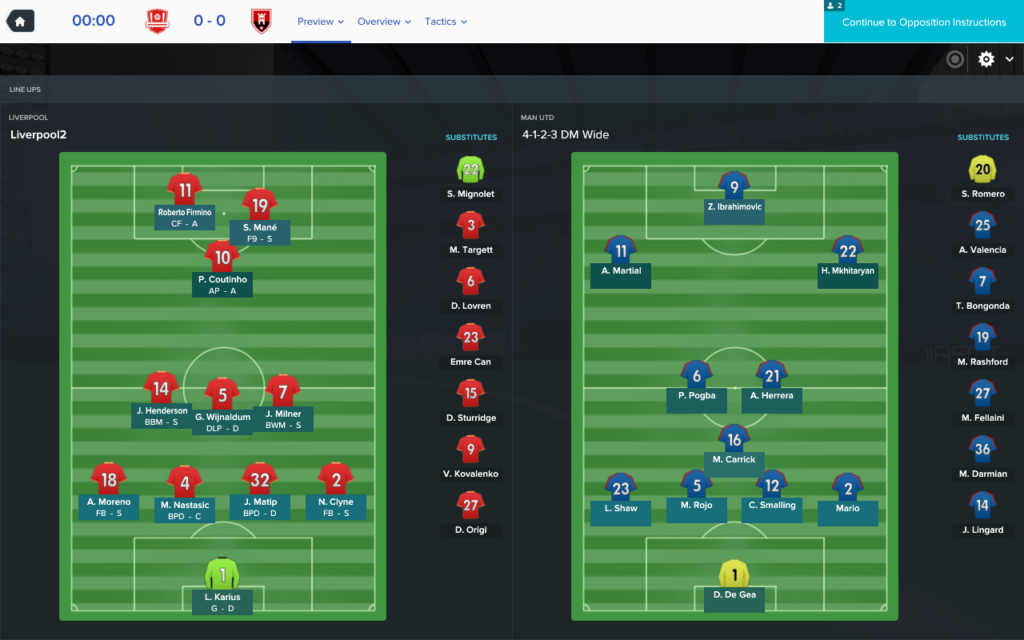 You know I said about it being more than that? Can I recant? Might I row back? Because we lose, 1-0; Zlatan scoring from a Luke Shaw pull back just before half-time condemns us to our first defeat in 15 Premier League games.

It’s a very disappointing way to end the month and I’d sooner move on. The gap opens to five points between us and league leaders Spurs, with 11 games left to play. It’s a large one, given how tight everything has been, but I believe in my squad.

We can beat Iain and, who knows, maybe the rest? But only one of those really matters… 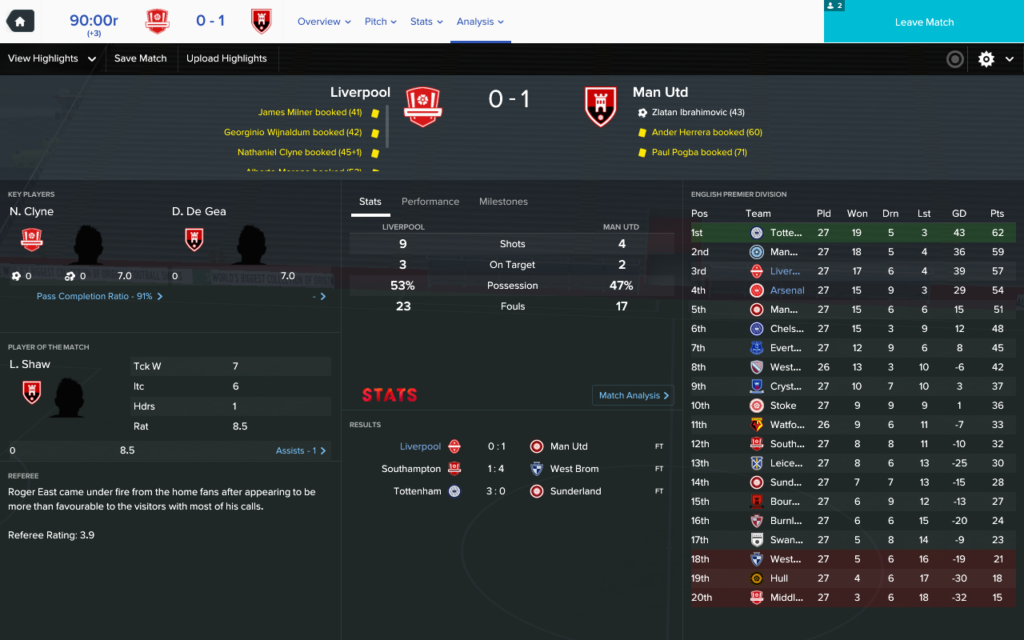 IAIN: A trip to Manchester City isn’t really what I want, not least because I have some squad problems. Olivier Giroud isn’t enjoying his supersub role as much as I’d hoped and he wants to leave. I don’t want him to go, he’s a great option from the bench, but I have to promise him some starts to keep him.

So I’m going to do something a little different here, playing an asymmetric shape with Sanchez as an inside forward and clipping Nacho Monreal’s wings to make sure we don’t get exploited. 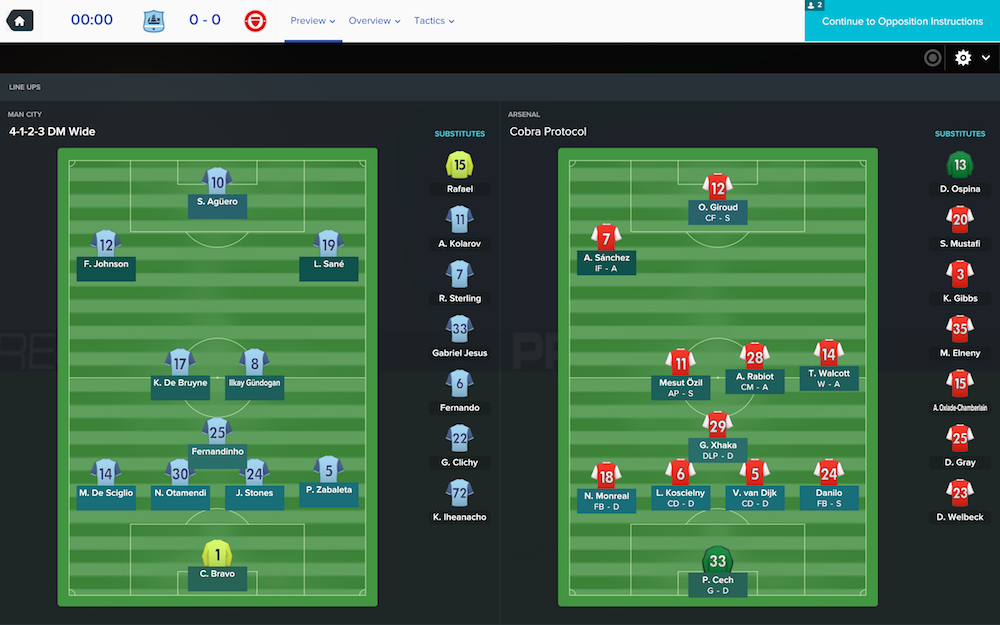 When I had that rough time at Everton, it was painful, but… it wasn’t entirely unexpected. It was, after all, Everton. There was disappointment and there was sadness, but it wasn’t frustrating because I didn’t really expect anything else. This is frustrating though. Arsenal are frustrating. Arsenal are so frustrating that I want to schedule a team bonding trip to one of those particularly deep caves in Wales and then have someone seal up all the exits once we get inside, shutting us off from the outside world to save anyone else from exposure to our relentless incompetence, leaving us to ponder our idiocy in damp darkness for all of eternity and feeling all the time that we deserve this fate.

Sanchez and Giroud combine for a wonderful opener in the first half that is very much against the run of play, but satisfying all the same. City make chances, but not good ones and we look like we’ll hold on for a season-changing victory. And then Nacho Monreal underhits a back pass, Sergio Aguero laughs and then everything sort of fades out into darkness.

I wake up three hours later on the sofa in the office. Alex passes me a glass of cold water.

“Listen mate,” he says kindly. “Shall we just play Civilization instead?” 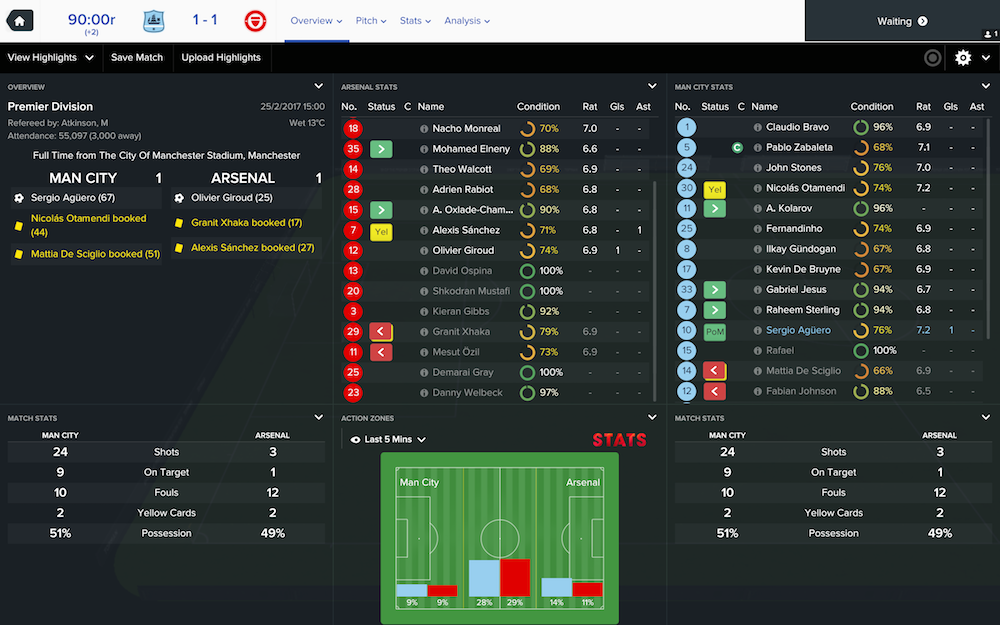 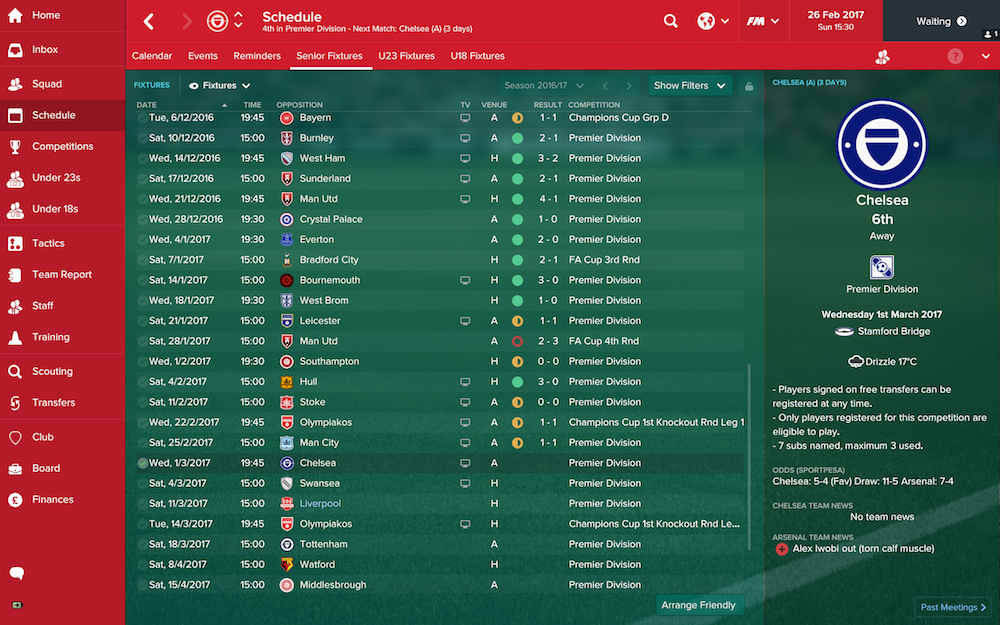 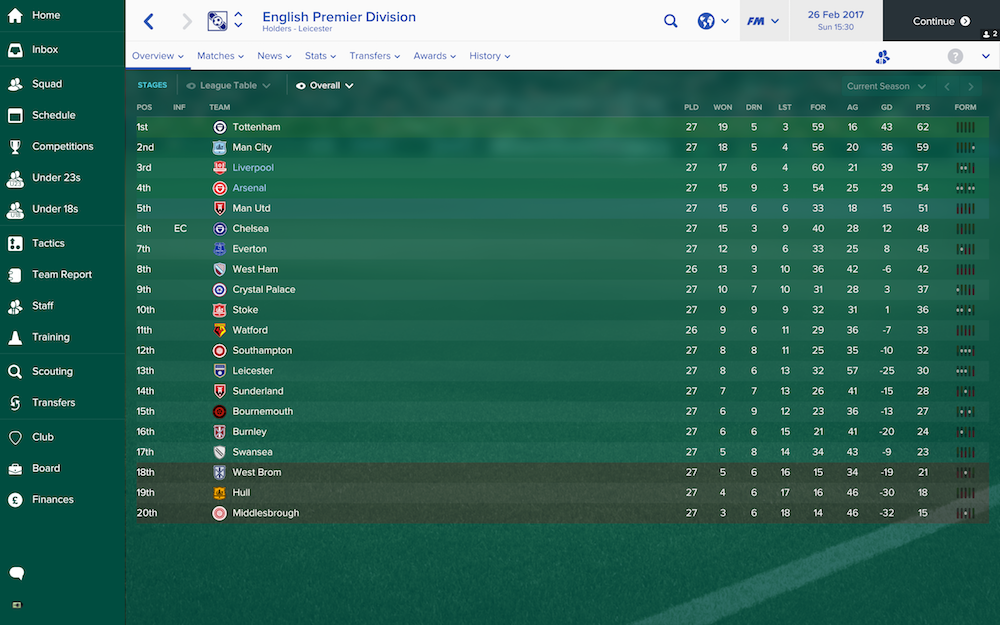