IAIN: After two disappointing games, a draw with Leicester that ended our eight-game winning streak, and an unfortunate and appropriately plucky defeat in the cup to Manchester United, we need to get back on track here before we lose all of that lovely momentum.

We’re at home to Southampton,  so there’s a chance for Virgil van Dijk to show off his new shirt in front of his old friends. This is very much a new look Arsenal now. Adrien Rabiot joined in the summer and he’s already racked up nine assists. Van Dijk, Danilo and Demarai Gray make up the quartet of significant improvements, (we’re not discussing Jonas Olsson) picked up for a total net spend of £37m.

I share my joy with Alex, but bless him, he’s too busy convincing himself that he was right not to strengthen his own side ahead of a title challenge. 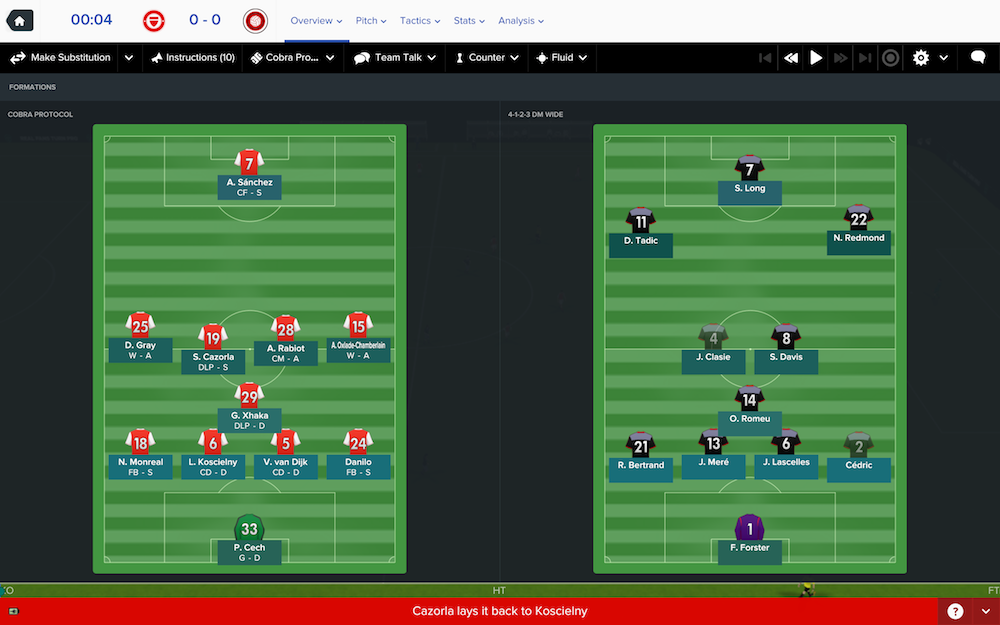 Content that the Saints are here to block up and snatch a point, I go more attacking in the second half, but without joy. After 70 minutes, I bring on Olivier Giroud and go 4-4-2, but the rest of the game passes without incident. Not a single highlight. It just drains away. Fraser Forster is the man of the match, unsurprisingly. But we’ve dropped points again. 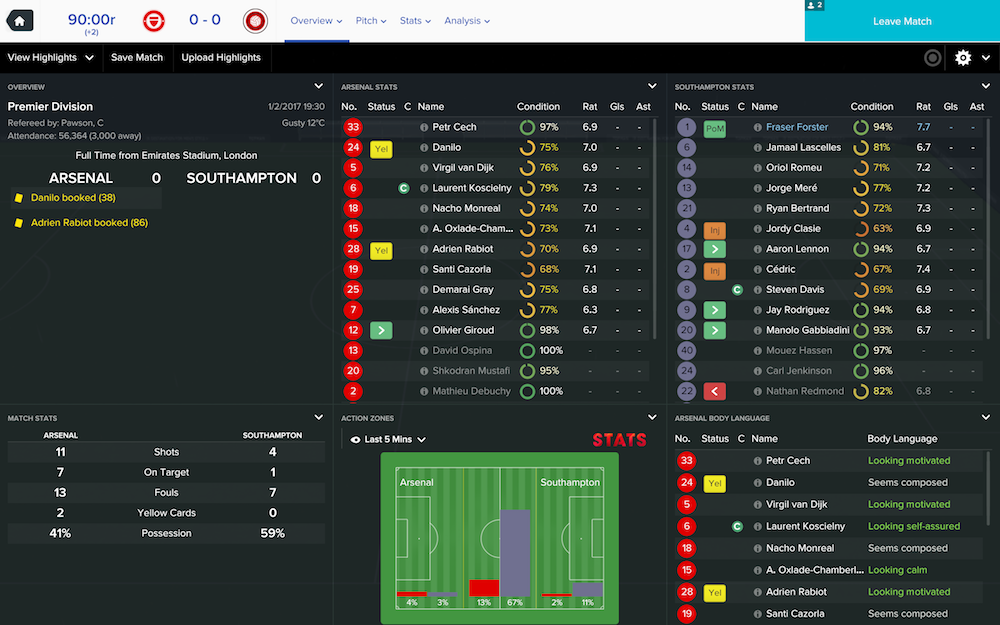 ALEX: While we are out of the FA Cup, our league form remains excellent and the Board, naturally, are delighted. 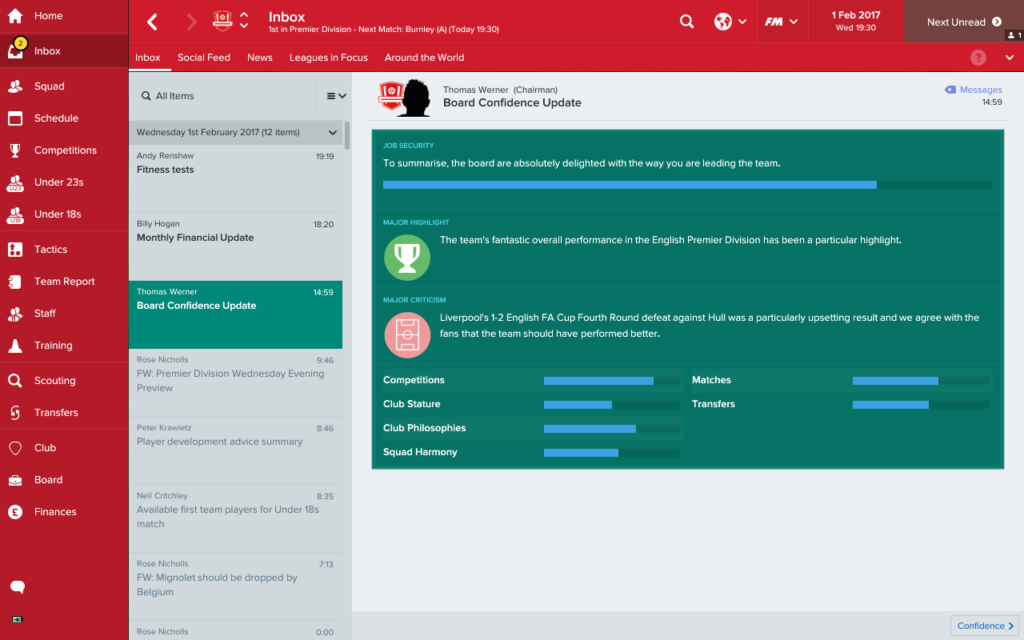 Of course, we are still missing our two AFCON stars, and the squad is thin in central midfield and defence, but as the window closes, I decide not to spend. We threw money around before the season started and, with Mane and Matip returning this month, and Stewart a reasonable replacement in midfield, it seems silly to recruit and then leave myself with awkward decisions. I already have enough issues rotating my front three as it is.

Our next game: Burnley are in 17th and we must visit them, so this is actually the sort of tricky fixture one really wouldn’t want after a cup defeat. With Moreno suspended and Lovren an injury worry, I recall Gomez from his loan stint at Derby, who are apparently so unhappy to see him leave they put in another loan bid for him on the day he gets back to Liverpool.

I complete the Lallana to Juventus deal, which brings in around £18m up front, with around £3m to Southampton, and further fees down the line. It’s a good deal for a player who isn’t getting in the team. I note with amusement that Iain has spent £69m. “But it’s about net spend,” he blusters, totally missing the point.

For our trip to Burnley, who are, according to Sean Dyche, expecting “a battle against possession-hungry Liverpool”, I recall Coutinho and Sturridge, and give Grujic a start. Gomez comes onto the bench for Ragnar. 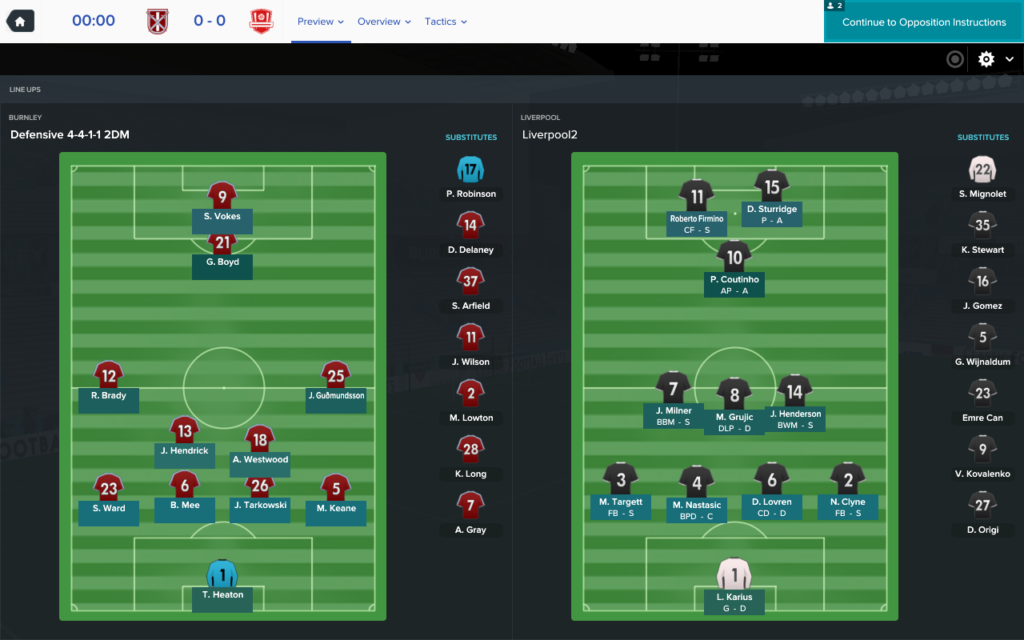 Eurgh – one of those games with two highlights in 90 minutes. It is an unsurprising 0-0 draw.

Despite Burnley losing Ashley Westwood to a red card, having 68% possession, and six shots on target, we simply cannot find a way through Dyche’s low block, which deploys two sitting defensive midfielders and two wide men who don’t get forward.

We play pretty little patterns in front of them (I assume – I can’t actually see due to the aforementioned dearth of highlights), but there’s no breaking down Burnley’s defence. Having said that, there’s no breaking down ours either: we’ve not conceded in eight Premier League matches. We are top of the league still, but only alphabetically, sharing both points total and goal difference with Spurs. 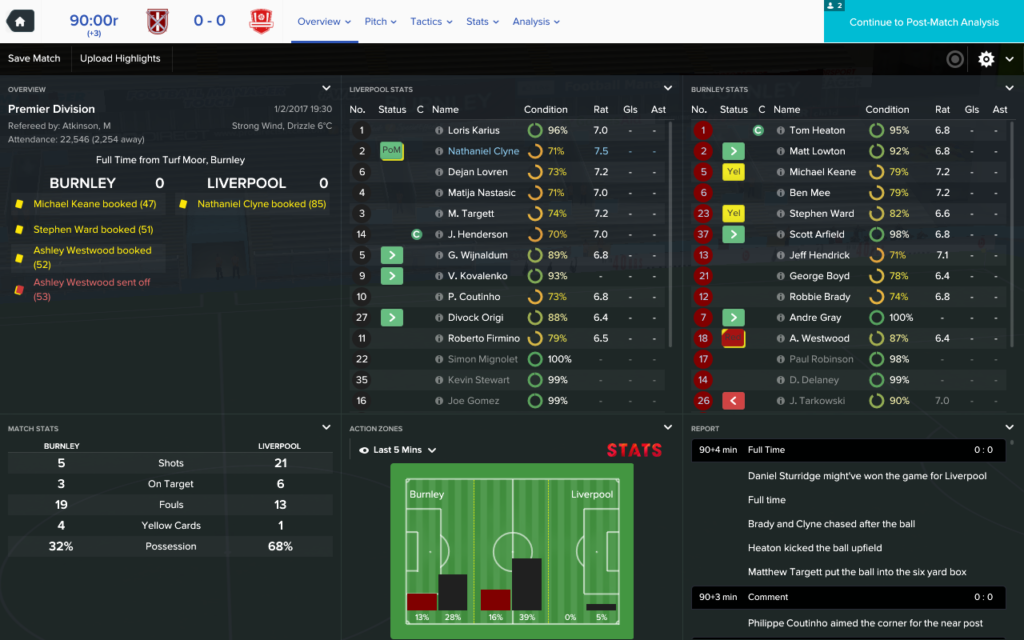 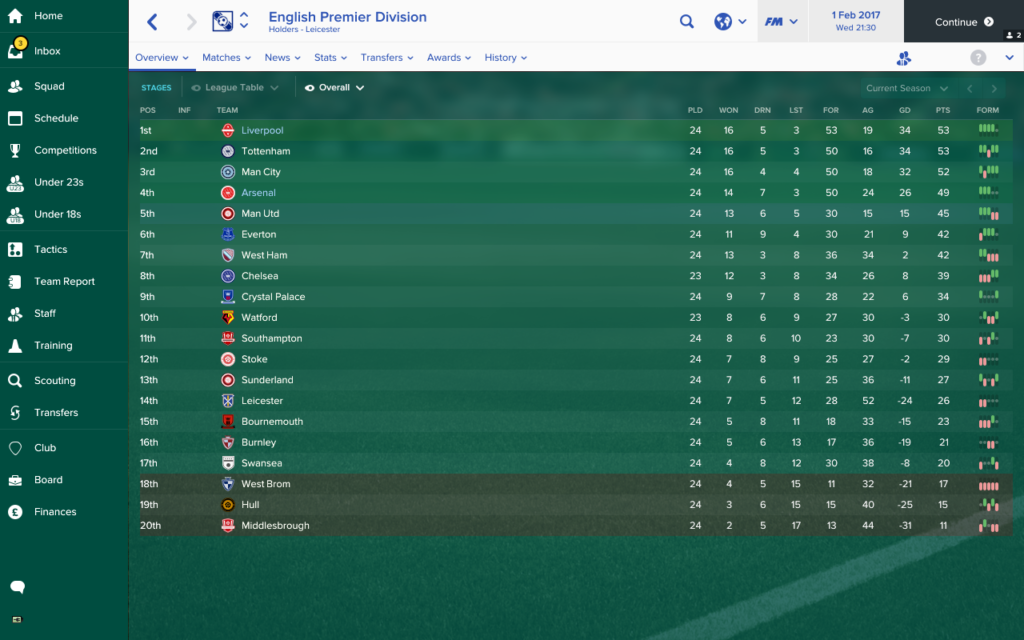 IAIN: We’ll make a slight change for this, because I’m concerned about games getting away from me. Out comes Santi Cazorla, who I still love, and in comes Mesut Ozil as an advanced playmaker. I still despise him, but it’s about the team, innit?

Alex warns me about Hull, who knocked him out of the FA Cup last month. But really, if I lose this, I’ll deserve all I get. 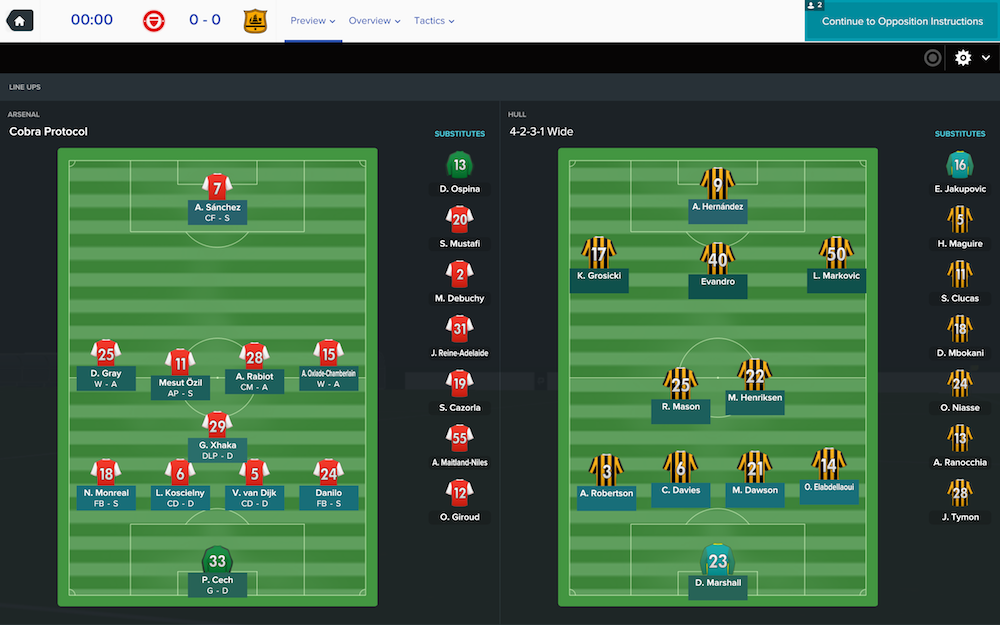 Ah, that feels good. A perfect afternoon. A nice, compact set-up prevents Hull from doing anything even remotely annoying while a counter-attacking approach enables us to pick them off at our leisure. Ozil makes the first, lobbing up a free kick that Laurent Koscielny heads down into the path of Demarai Gray, and we’re one up.

My patented ‘counter-corner’ sees Gray break away from a failed Hull set piece and feed Alex Oxlade-Chamberlain on the right. The Ox waits just long enough for Sanchez to arrive, cuts the ball back and enjoys the glow of a job well done. And, to vindicate my decision to give him a more attacking role, Ozil clips a late pass through for Olivier Giroud to wrap things up. It could easily have been more. 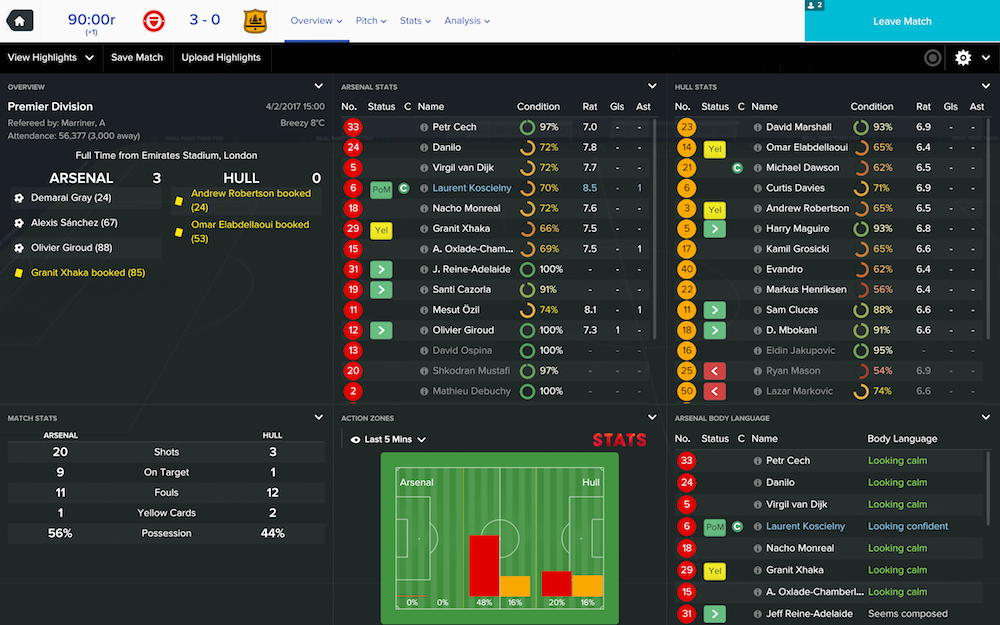 ALEX: The next game is Sunderland, also away, meaning that our last three matches have all been on the road. Milner is injured and so I recall the unhappy Can, shifting Henderson into the box-to-box role.

I am also, finally, able to call on Moreno again, who has been a revelation this season, improving from a 3.5 star to a 4 star player under my tutelage. Clyne and Moreno provide the necessary width for this formation to work, so his suspension was costly. Otherwise, we are unchanged. 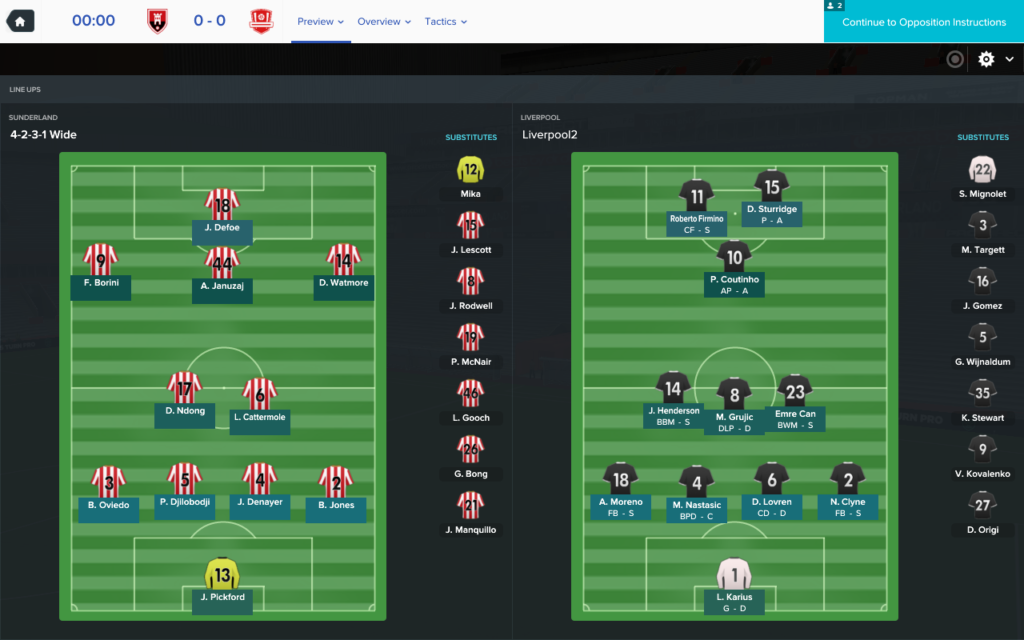 Another dank start, with no highlights for a long time. I start to fret over whether the match engine has figured me out and whispered the secret to AI David Moyes. It then gets worse, as Defoe rifles one in from 30 yards or so. He’s helped by terrible keeping from Karius, who dives late and palms it into our net; it’s his first error in nine or so games, though, so I magnanimously decide to forgive him…if we win.

We finally equalise, Kovalenko apparently getting the goal, but it’s clearly Wijnaldum who drives it towards Pickford and the Ukrainian simply deflects it off his leg and past the despairing Sunderland stopper. However they come, I’ll take them. And that’s it – the rest of the game peters out into aimless clearances from the Black Cats and lots of intricate nothingness from us.

I am singularly unimpressed, and frankly state my views to the lads. We need to be much better if we’re going to win the title. 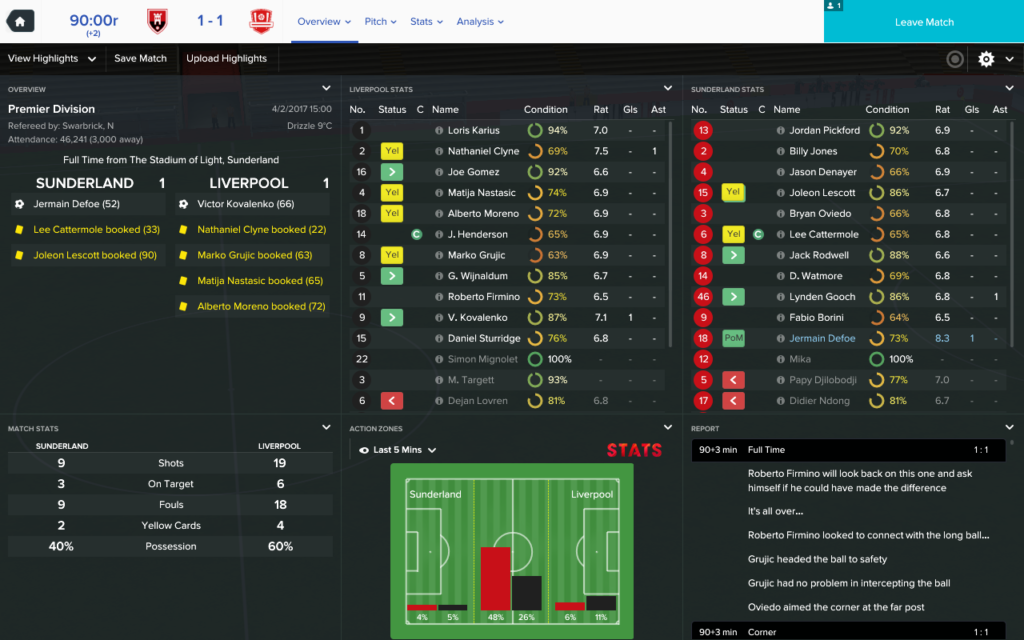 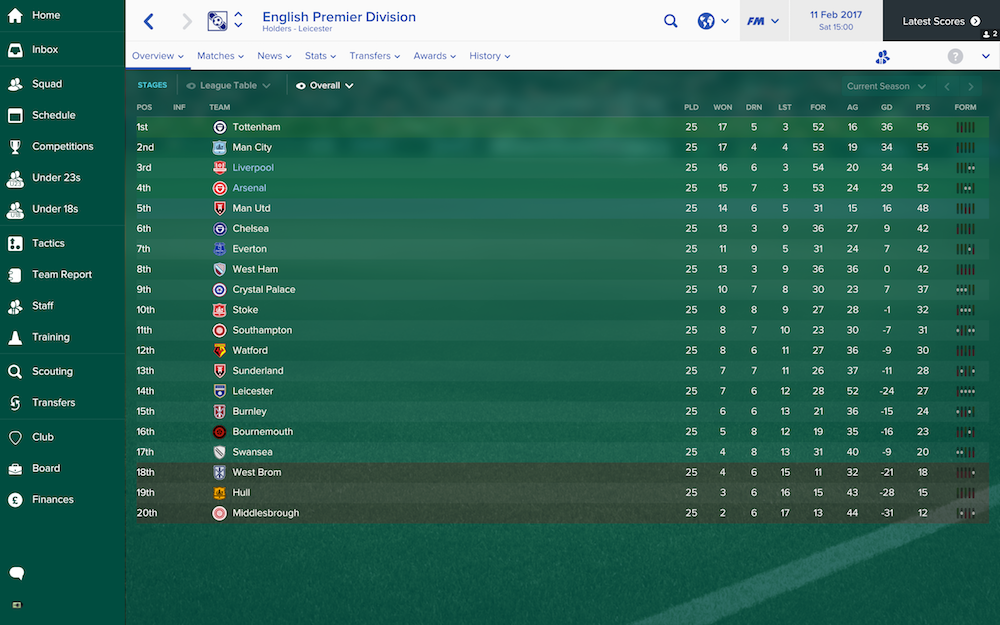