IAIN, all alone: Picture, if you will, a man in a state of much vexation. He paces his office, his face contorted with concentration. He leaves the office and walks, almost in a daze, across the nearby heath.

Picture him now. He is at home. It is night time. But he is awake. He stands silently in the kitchen, a single piece of toast sits forlornly on a plate, going cold. It will be thrown away in an hour when he jerks back to consciousness and remembers it is there. And that’s when he stops, his hand frozen above the open pedal bin. And that’s when he smiles.

I have spent a whole season with a formation that works and a squad that…well…doesn’t quite work as well I’d like. Let’s take a look, shall we? 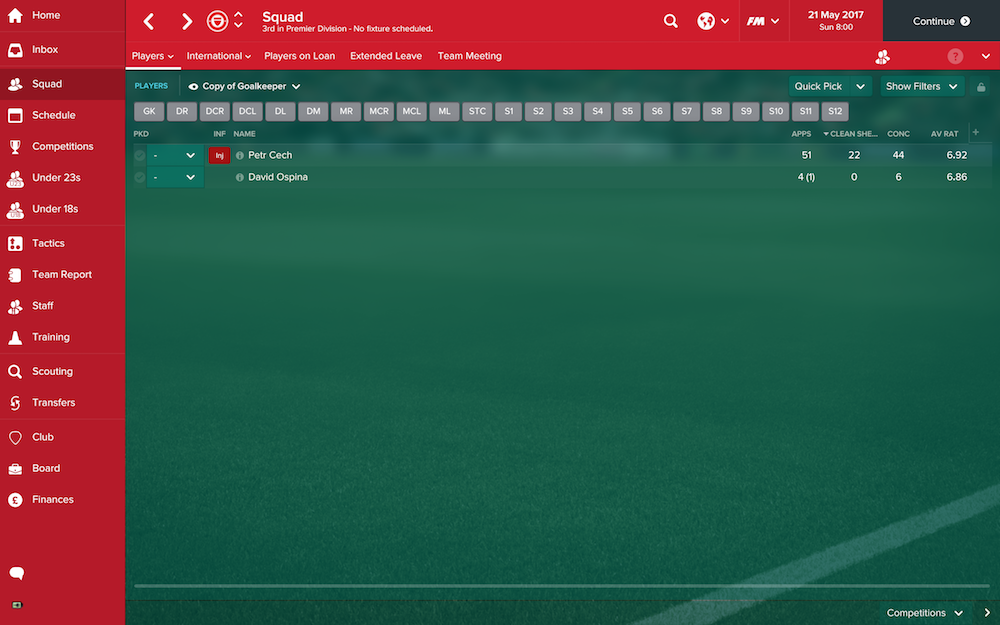 There’s no urgent need to replace Petr Cech, even if he is 35. He conceded at a rate of less than a half a goal a game last season. I’ll certainly be scouting hard to find the best available goalkeeper on the planet for the 2018/19 campaign, but I reckon he’s got the next one covered. We’ll have to wait and see what David Ospina does this summer. I’m happy for him to remain as understudy though. 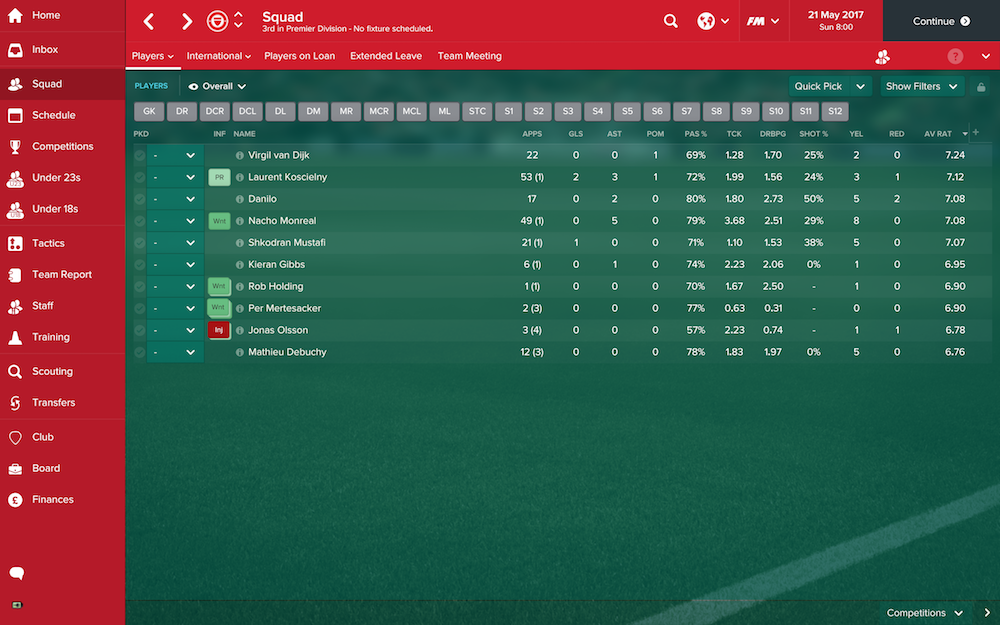 The back four is absolutely set. Danilo’s lack of discipline is a bit of a concern, but he gets up the pitch well enough and he’ll do that even more when I tweak his role over the summer. Nacho Monreal was just as impressive on the left and surprisingly strong in the tackle. Laurent Koscielny was a rock and Virgil van Dijk was probably the signing of the season.

I feel for Shkodran Mustafi, but he’s excellent cover and I think it’s time for Rob Holding to play more of a role in the squad. Kieran Gibbs and Mathieu Debuchy provide reasonable back-up, but I’ll be keeping an eye out for younger upgrades there. No rush though. 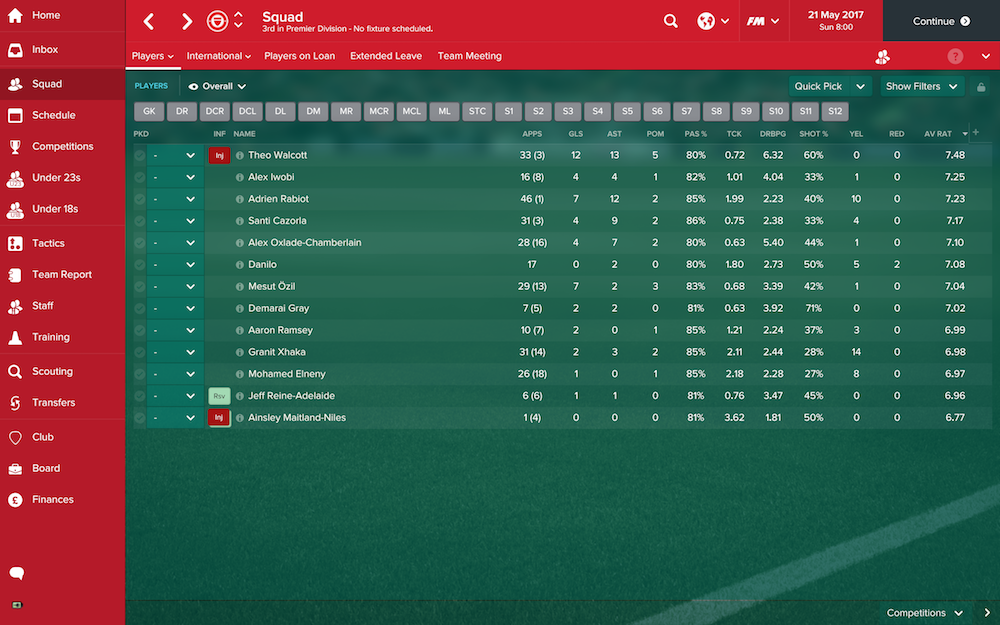 Now, as I’m sure you’ve noticed, the gameplan in the middle is pretty simple. The wingers go fast and wide, belting up the pitch and then cutting back low crosses for our advancing midfielders. One man sits back to protect the defence (Mohamed Elneny or Granit Xhaka), one man runs the show (Santi Cazorla or Aaron Ramsey) and one man has the licence to scamper forward (Adrien Rabiot).

With Alexis Sanchez dropping deep and with absolute freedom, that means that every cross should have at least three advanced targets, or four if the cross beats everyone and reaches the winger on the far side. And it is for this reason that we ended the season with nearly 200 completed crosses, compared to the second highest total of 130 by Manchester City. Low crosses from the byline is what we do. 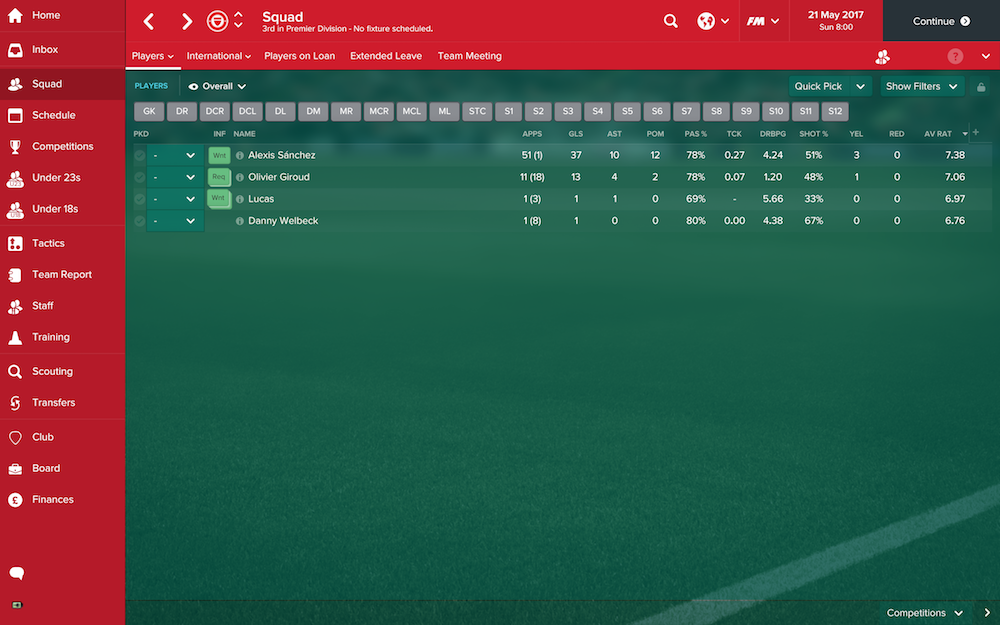 It’s fair to say that I have no problem with Sanchez’s contribution. He’s so good and so clever and so cunning that he’s best left to his own devices. He knows when to take it on himself and he knows when to bring in his team-mates. He could be a little more accurate with his shooting, if I’m being picky, but those are some great numbers.

But Olivier Giroud isn’t a complete forward. He’s good, he scores a few, but he’s hardly a natural replacement for Sanchez. And the less said about Danny Welbeck the better. He has proved conclusively that he cannot be relied upon. And so they must leave. And so too must Mesut Ozil. 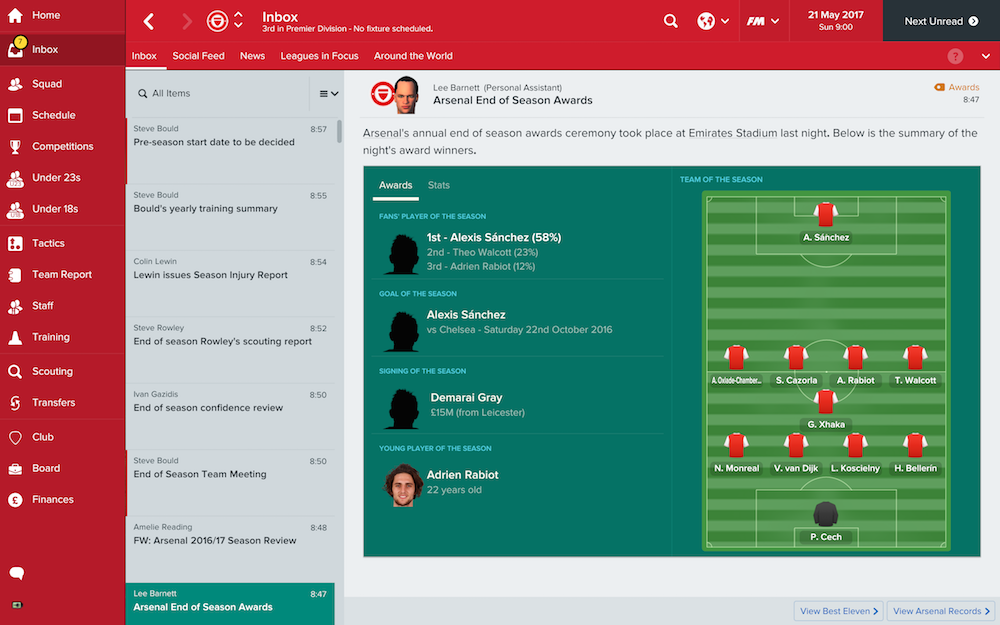 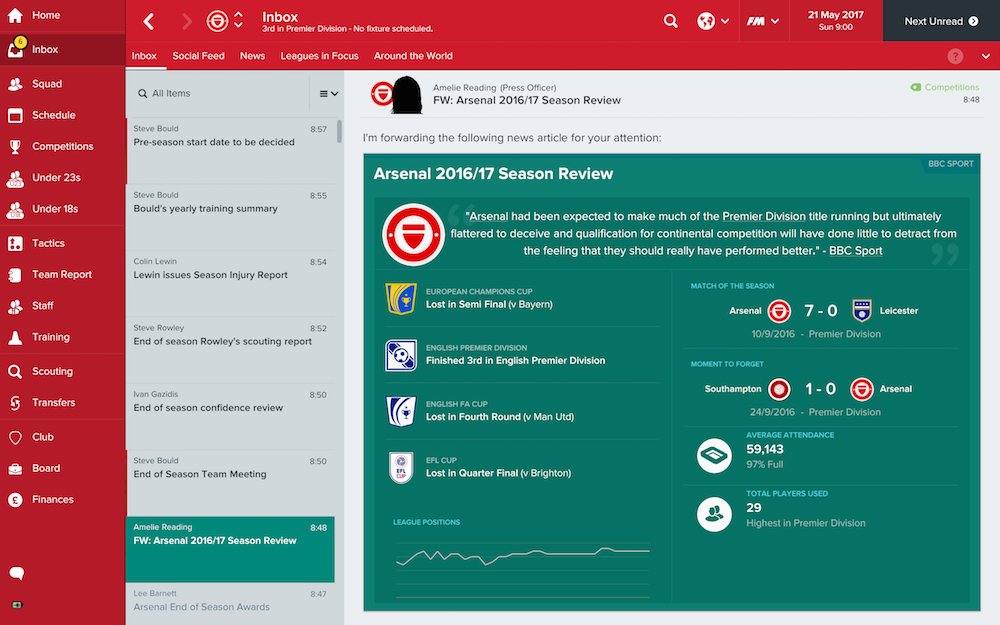 It wasn’t a bad season. You only have to look at the hideous collapse of Alex’s Liverpool to see how hard this division is and how quickly everything can go wrong. We had a great run in Europe until that monumental rectal collapse in Munich and when you consider that we lost four points alone by missing injury time penalties, we really aren’t far from where we need to be.

We lost three league games before November, but then we didn’t lose another game for the rest of the season. That’s not a coincidence. That’s because I was trying to find and then refine a system that worked. Well, I think I’ve got that now. The Cobra Protocol needs to be a little more aggressive, with a higher line and more attacking full-backs, but it’s almost ready. The Klopp Protocol, high tempo, high line, high press, is an excellent back-up plan. And then there’s the Castle Protocol, which is essentially dropping deep and playing keepball until the other manager spontaneously combusts. A few little tweaks, some work on set-pieces and I think we’ll be ready.

That just leaves the tricky question of replacements. Three (Danilo, Van Dijk and Rabiot) of my four signings are now first-team regulars with the other (Gray) a fine rotation option. So I don’t need much more. I have to decide whether to give Ainsley Maitland-Niles a chance to impress in the middle. Can he be trusted to provide the cover I need? I’ll sleep on that one.

But I certainly need to find some cover for Sanchez. And this is going to be hard. I can’t just go out and buy the best striker available because they won’t like playing second fiddle. Equally, I can’t just pick up a talented 18-year-old and use him sparingly because Sanchez might get injured and then I’ll be in the shit. I need a middle ground. 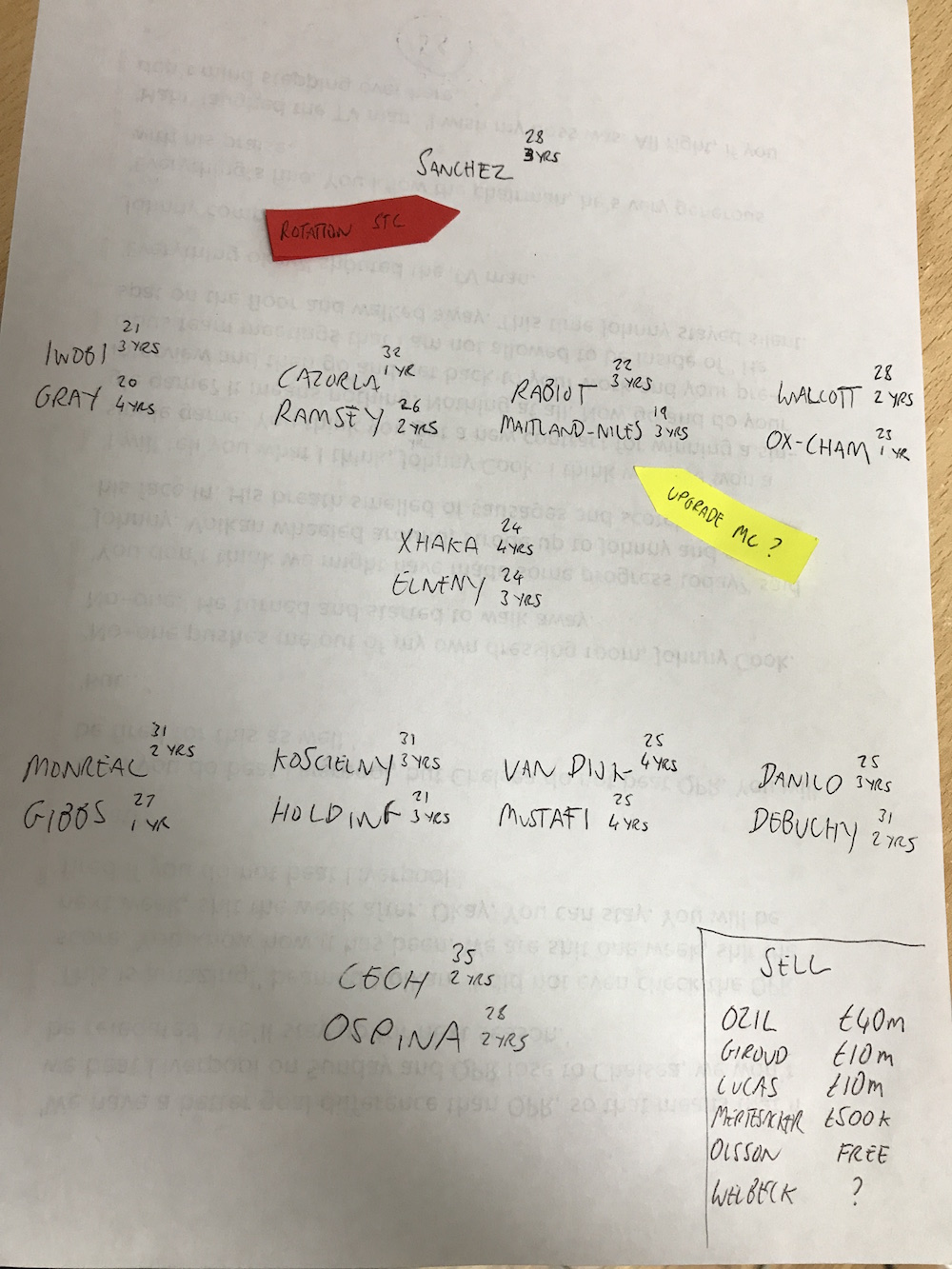 There’s an added complication too. And I didn’t realise until it after I’d had a team of graphic designers knock together that team sheet up there.

Before he shuffled upstairs to become my director of football, Arsene Wenger sent scores of players out on loan. And some of them did pretty well. So do I give Wojciech Szczesny another go between the sticks? Is Jack Wilshere the man I need in the middle? And am I wasting my time looking for a new striker when I could just give Chuba Akpom the chance he’s been crying out for all these years?

But there is one decision of which I can be absolutely sure. It was a nice idea, he provided crucial back-up in the summer when most of my defenders were injured and it didn’t cost us much money, but by thunder, there’s no way that Jonas Olsson is getting a contract extension.