IAIN: Last month was that rarest of months. It was a good month. From start to finish, March’s fixture list is just a glorious streak of green. In fact, we’ve actually only lost one game in 23 now in all competitions, furthering my view that we’ve basically got our shit together. It’s all those poxy draws that have let us down. But let’s take the time to enjoy the happy moments, because God knows, there’ll be more misery on the way soon, I’m sure.

Arsenal have made a clean sweep of the awards with Alexis Sanchez winning the player, Adrien Rabiot winning the young player and your humble narrator taking the manager of the month award. I recognise hot iron when I see it, and I strike, signing a three-year deal to stay at the club. 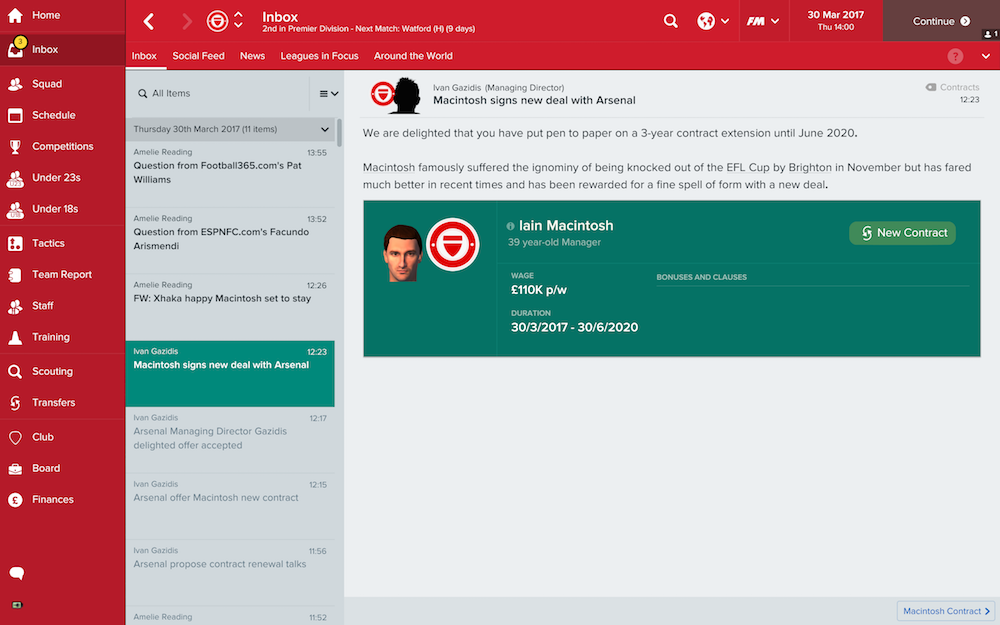 But there are issues. With Santi Cazorla out, I need a great technical midfielder to pull it all together in the middle. Sit down, Mesut. Given that my ploy of reintroducing Alex Iwobi into the team seemed to shame him into dropping his transfer request, I opt to try the same thing with Aaron Ramsey, currently rotting in the reserves.

Granit Xhaka will play the Cazorla role, but Ramsey will be there on the bench just in case. As for Ozil, he can play out on the left. Watford warrant the Klopp Protocol. Not because I take them lightly. Quite the contrary. But I want to pin them back. Ozil’s role should enable him to exploit the space at the back when my midfielders charge up in support and the situation gets blurry. That’s the hope anyway. 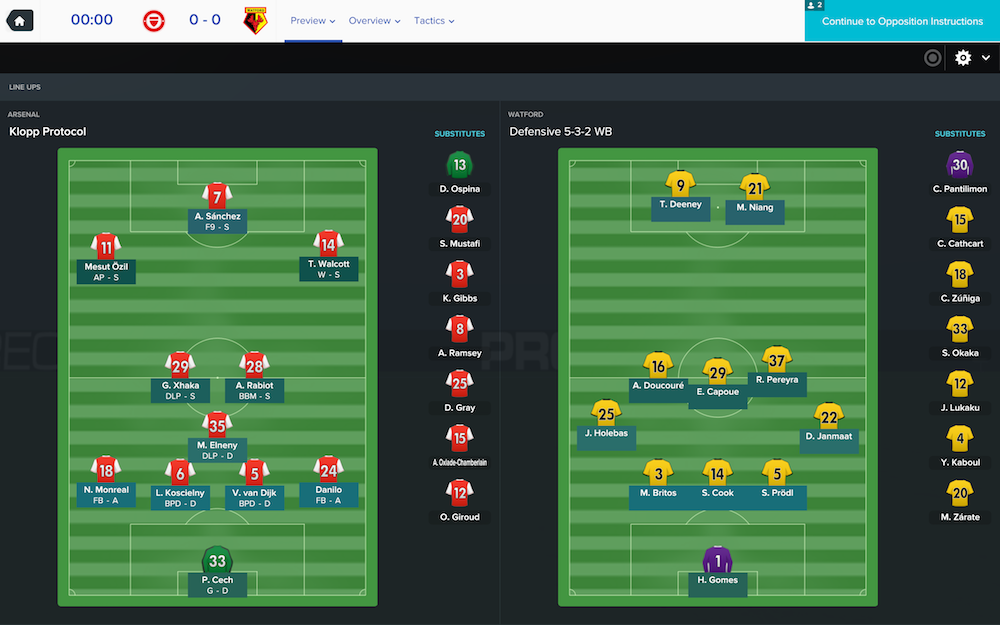 That is the most I think I’ve ever overwhelmed a team in a first half. In the first ten minutes alone, we had nine shots. By half time, we were up to 21. Mesut Ozil scored one in open play and then three from the spot as Watford reacted to any danger by kicking my players over.

Unfortunately, these points came at great cost. We lost Theo Walcott and, at the first sign of a world class performance, Ozil himself to injury. Once upon a time I’d have seen the absence of these two chancers as an unexpected bonus, but not now. Not now.

Compensation arrives in the classified football results. Leaders Manchester City have drawn with Hull. The gap is down to three points. 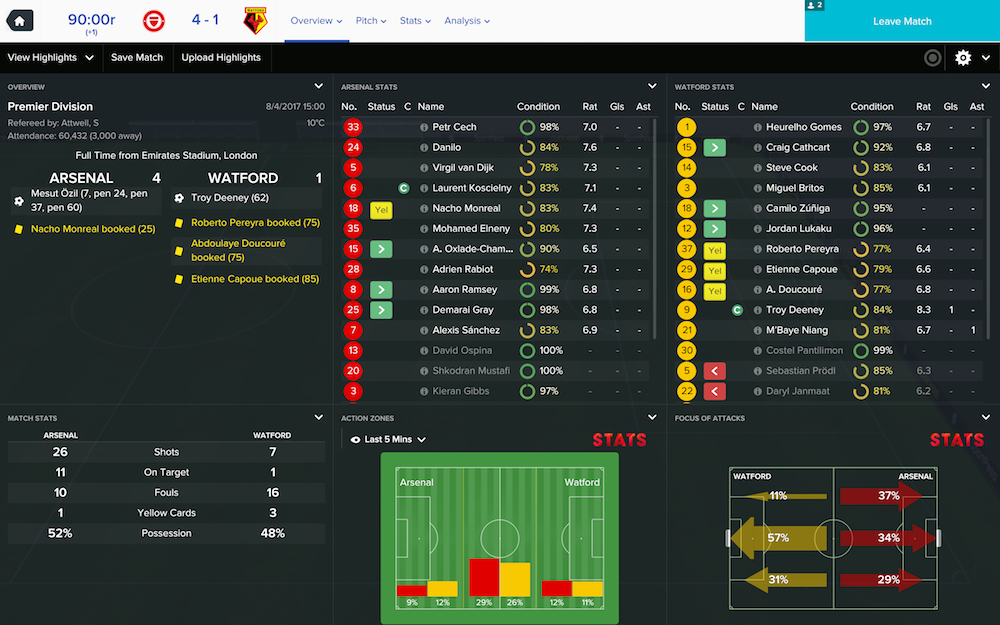 ALEX: The international break: an opportunity for Iain to go suit shopping and for me to hit the library and do some research on long-forgotten Dutch coaches of the 1930s. I also cast an eye over the schedule: seven fixtures left in the season and two points behind Macintosh’s Arsenal, who are in second. Can we realistically target 21 points from the remaining fixtures? Possibly, but our last nine games read three wins, three draws, three losses. At least it’s pleasantly symmetrical.

Our first game after the hiatus is Leicester away. I decide to change the formation to a 4-1-2-3 (DM). Iain expresses surprise, likening me to a certain resolutely unbiddable French manager with an economics degree, but I have my suspicions that the AI has figured out my system and fresh approaches are required.

The change sees Grujic in an AP role alongside Henderson, Can tucked in behind, and inside forwards playing behind a complete striker. Strurridge: now is your time. Defensively, we line up very similarly. It’s a pretty straightforward shift, giving some greater width and playmaking from a deeper position. On the eve of the game, with Moreno suspended, Targett is stricken with a mysterious knack, so Stewart must come in at left-back. Let’s see if it works. 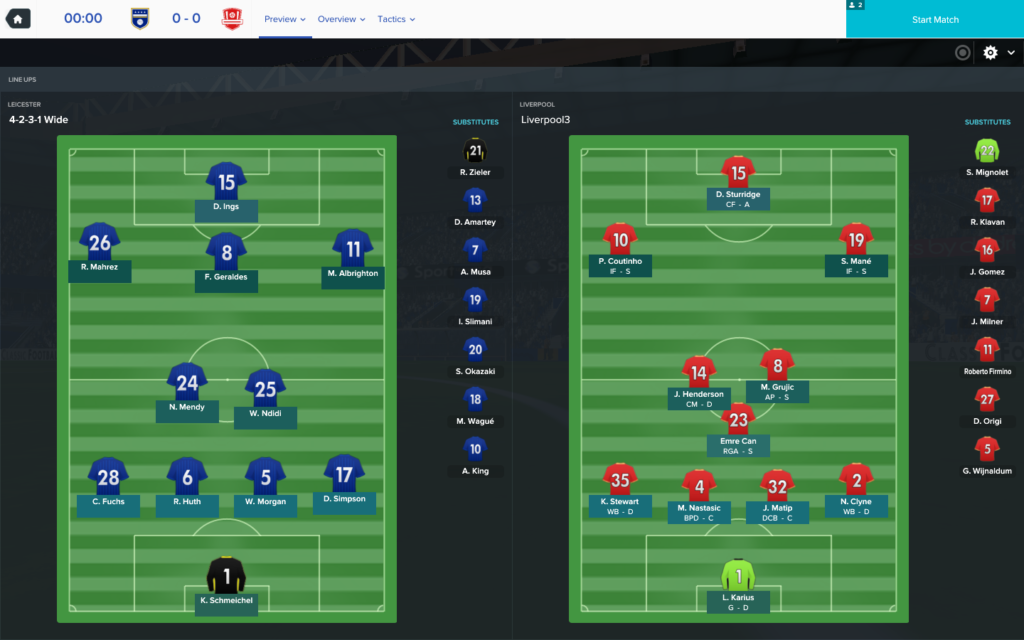 It does not. We start badly, as Clyne’s clearing header hits Can on the back and the rebound falls to Mahrez, who can’t miss from five yards. Leicester’s second is another defensive foul-up, as Matip’s header goes back into the penalty area and Mendy side-foots into an empty net with Karius stranded.

Leicester’s third (are you seeing a pattern here?) is yet another error, as Coutinho nods the ball down towards Karius, but finds only Albrighton, who pulls it back for Ings to score. Three fuck-ups, three goals. At half-time I bollock everyone in sight, even the kitman, and change back to 4-3-1-2. We score twice, good goals too, but it’s not enough. Never change tactics, lads. Never. 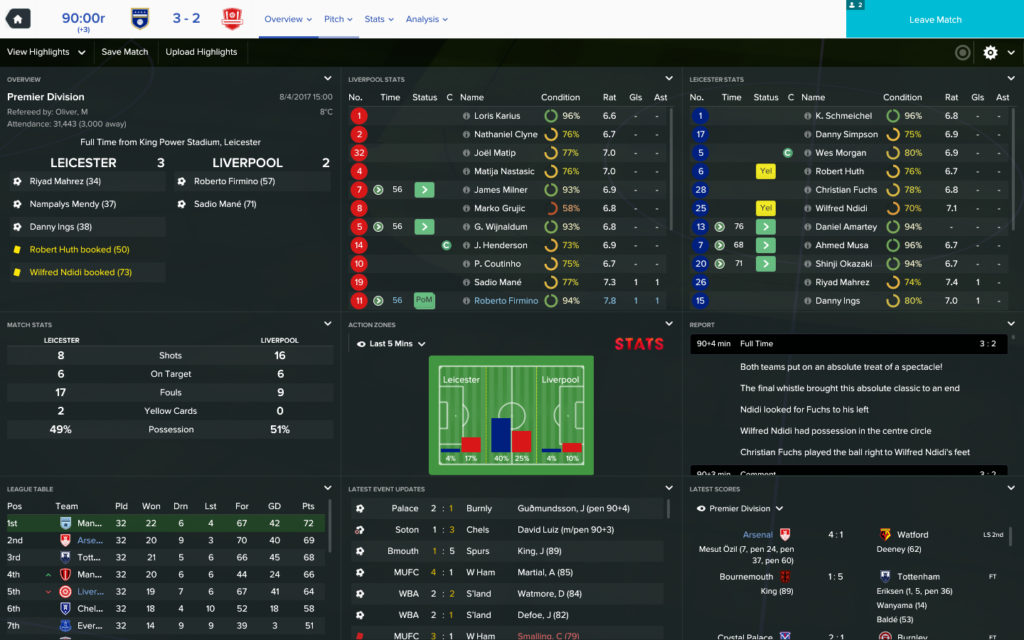 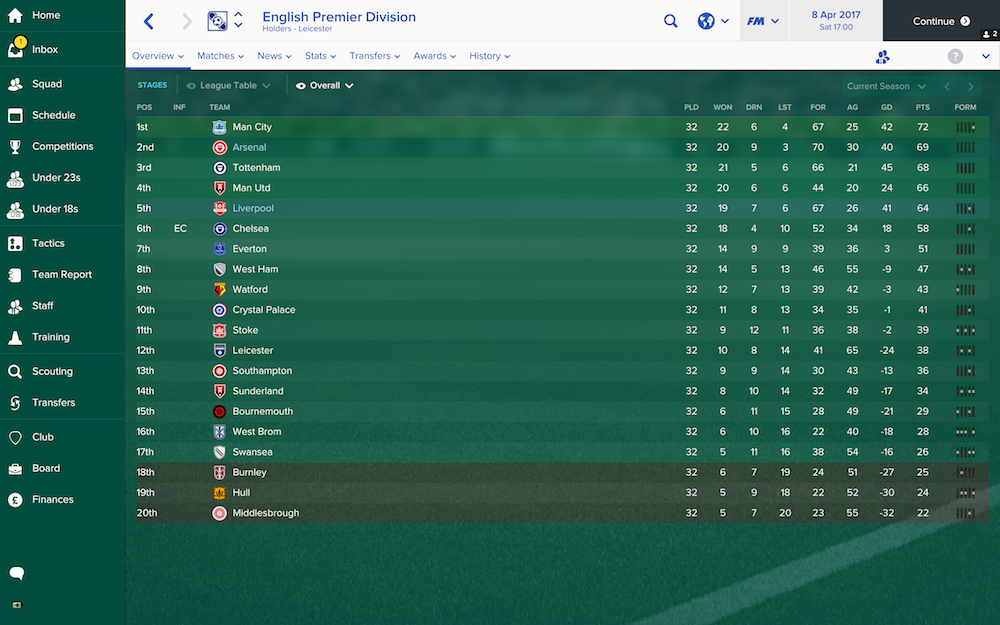 IAIN: I suppose that there’s no good time to play Juventus, but I can certainly think of some bad times. Like, for example, when you’ve got Walcott, Cazorla, Iwobi and Ozil all in the treatment room with Danilo and Demarai Gray unregistered.

We’re away from home too, so there are some very drastic changes and the reintroduction of the Cobra Protocol. It’s not ideal because their back three will swamp poor Alexis Sanchez, but it does mean that we’ll keep our shape and, hopefully, bring them back to London to finish them off. 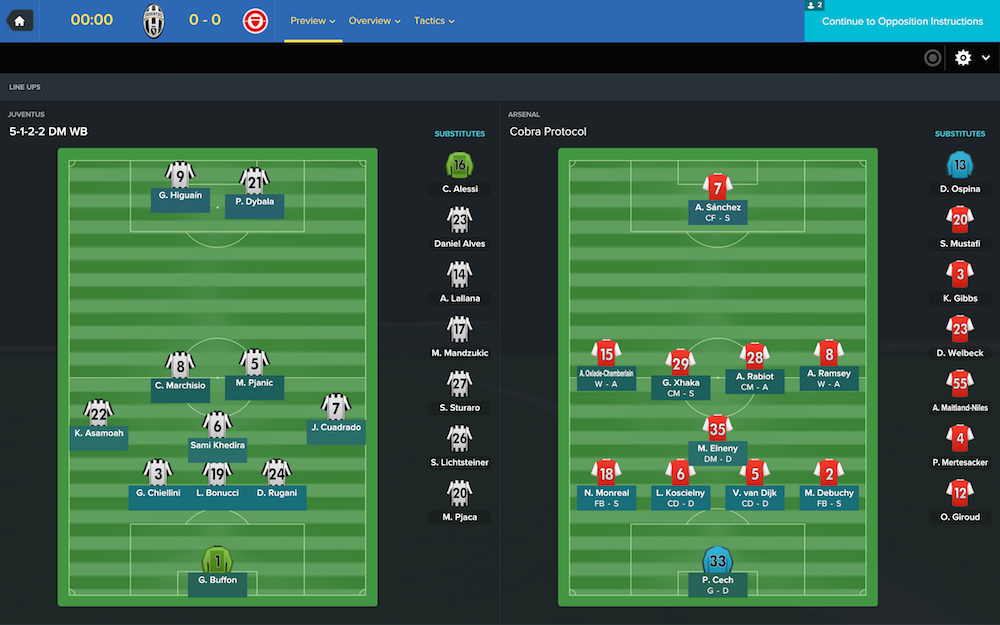 I’ll take that. I will absolutely take that. We snatched the lead with a pretty fortunate goal, an Oxlade-Chamberlain cross deflected into his own net by Daniele Rugani. Unwilling to shut the game down immediately, I decided to watch the players carefully to see how they reacted to this unexpected good fortune. In the very next highlight Miralem Pjanic slammed the equaliser home from a free-kick. I see.

Time to shut the game down then. And, contrary to all precedent, Arsenal were disciplined and composed. That away goal will come in very handy. 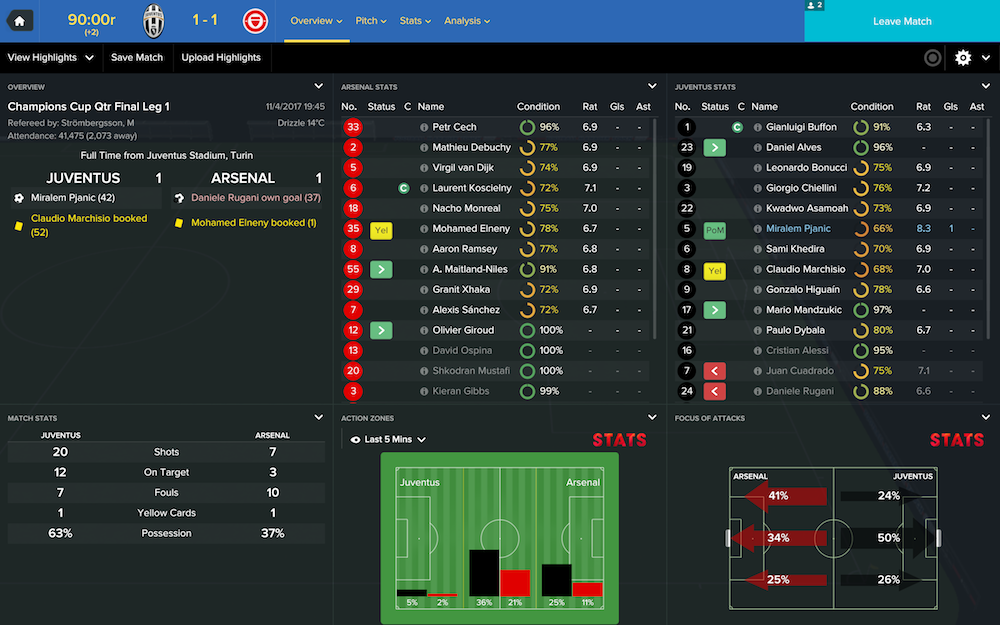 IAIN: Middlesbrough away is the palate cleanser between two servings of Juventus, but we’re looking a bit raggedy now. Along with all the injuries, we’re starting to see some serious fatigue in the ranks. I can’t risk Sanchez or Rabiot here, they’ll have to rest on the bench. I can’t play hi-octane football either. We’ll have to stay tight, hit them on the break and be happy with a narrow, boring win. I mean, it’s Middlesbrough. They’re far and away the worst team in the league. 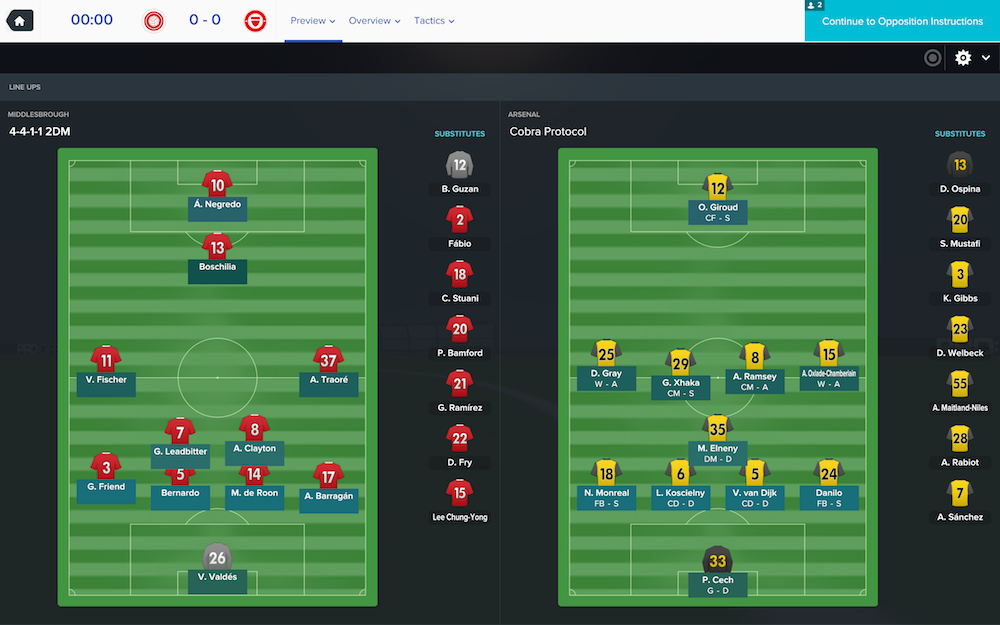 The Cobra Protocol lasts for just two minutes because that’s how long it takes Middlesbrough to score. They win an early corner and knock it back outside of the box to Adama Traore. With a loud ‘meep meep!’ he runs in a straight line all the way through my defence and cuts the ball back into the six yard box. My players react to this ball like it’s a grenade, they scatter, the ball bounces off Laurent Koscielny’s shin and falls at Alvaro Negredo’s feet. He doesn’t even hit it hard, but he doesn’t need to because Petr Cech is facing the wrong way.

One nil down to the worst team in the league, I switch to Klopp Protocol. It does nothing for half an hour because every time we get the ball, we give it away. Aaron Ramsey eventually equalises, but if you think that’s the signal for the comeback, you’re very wrong.

Aitor Karanka’s side look amazing. They’re making mincemeat of us. Traore’s ‘run in a straight line’ plan is baffling Danilo. He looks like a drunken party guest staring intently at the magician’s hand, trying to figure out where his watch has gone. It’s not even a close game. Boro make three clear cut chances and two half chances. They should win. I don’t know how they don’t. But I do know that I am very, very angry by the end. 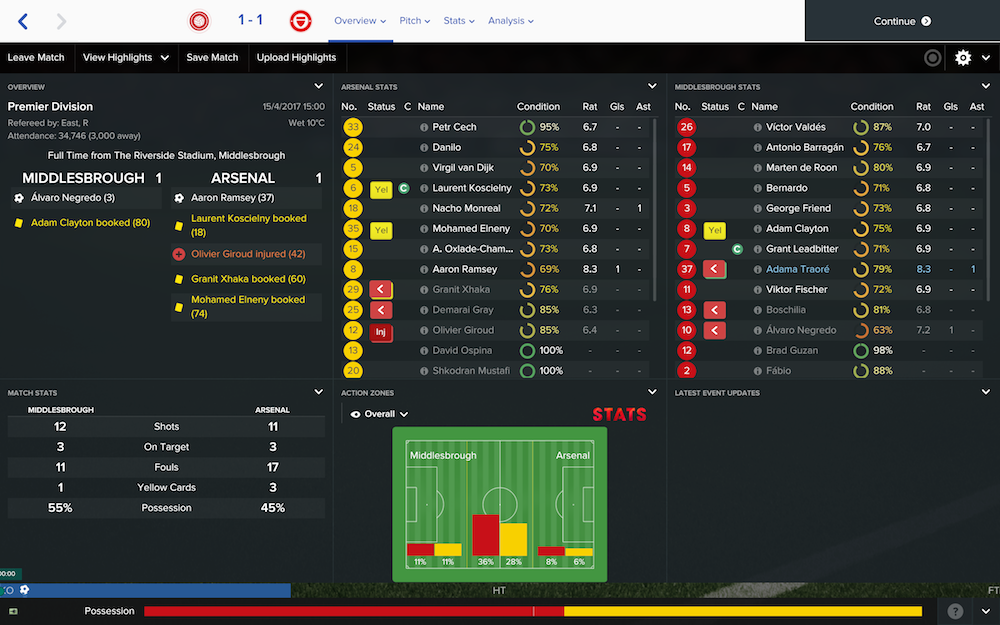 ALEX: Fed up with trying to accommodate four amazing attackers and Daniel Sturridge in three positional slots, I make a slight change. Not a full tactics change of the sort abjured above, more a gentle tickle. The season is entering its twilight zone, and my attitude is fuck it, why not.

So, while I retain the 4-3-1-2, I move the left-sided midfielder in a CM(A) role, the left-sided one to a box-to-box, and pick a central midfield three of Coutinho, Wijnaldum, and Henderson. Ahead, Firmino plays behind Sturridge and Mane. If this lot doesn’t score goals, I don’t know about anything anymore.

I pick Milner at left-back because Stewart was miserable, and that made me miserable. Moreno (suspended) and Nastasic, Sturridge, Targett and Grujic (injured) are out. I promote 16-year-old Carl Laidler to the bench, because it’s almost the end of the season and again, why not? It’s Southampton at home. It’s a must-win.

Iain plays the day before me. At one point he exclaims of Middlesbrough, “They look like fucking Real Madrid!” I just keep my head down. I have my own problems. 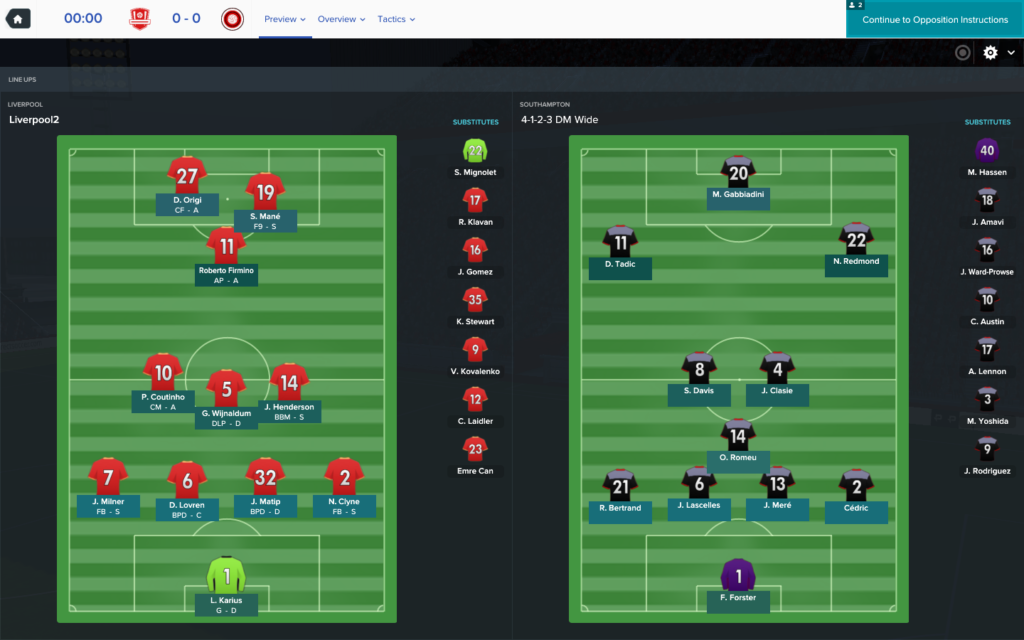 It’s a feisty, ill-tempered affair but we win 1-0, with nipper Laidler coming off the bench to score his first Liverpool goal from a Mane cross. We had gone 4-2-4 in search of anything resembling a chance and it worked well until bloody Wijnaldum got sent off for a horrendous challenge. Sudden recalibration was required, even with all the possession and most of the shots, so we reverted to a 4-2-2-1 (wide) and saw it out. Not pretty, not even that effective, but three points is just that. 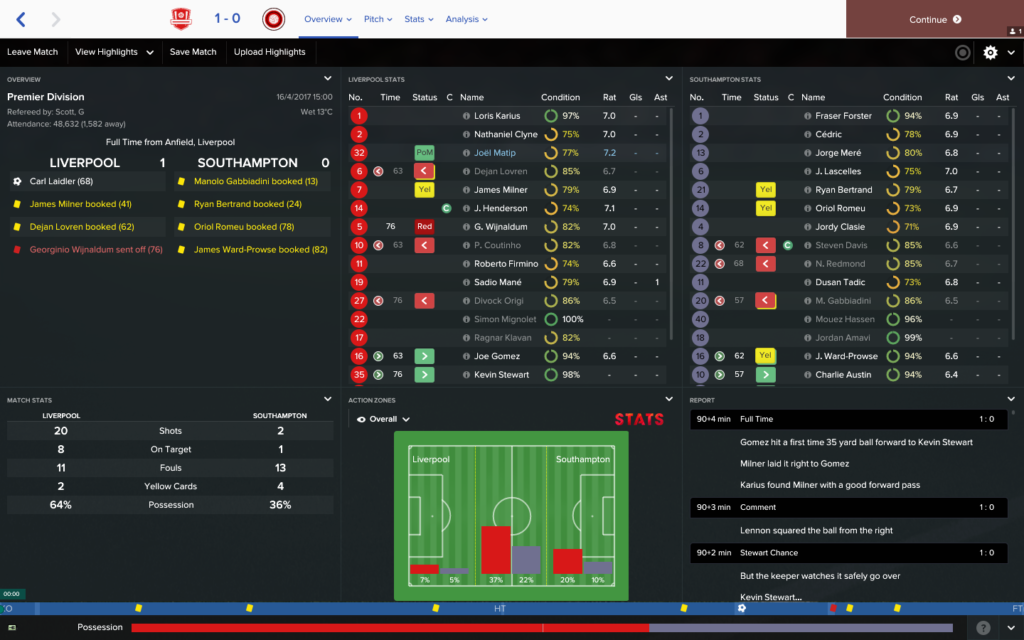 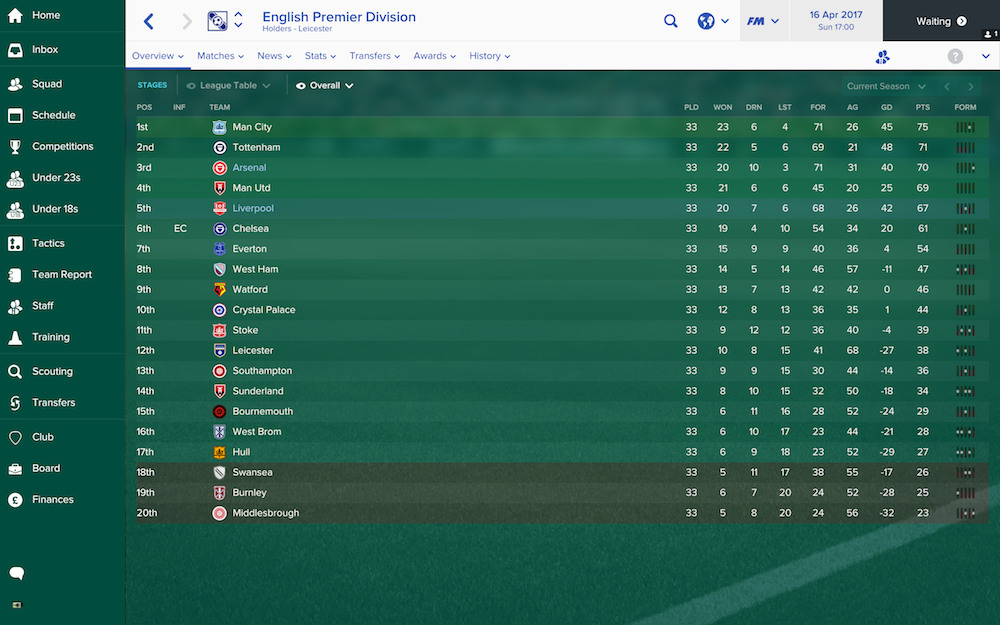