Just two days after beating Liverpool, we’re forced back into the fray with a New Year’s Day game against Bloody Watford. Don’t get me started on the winter break debate. This means we’ll be fielding a completely mix and match team, which is all the harder because of numerous injuries.

I’m also unamused to see that Calum Chambers has had his head turned by interest from Manchester City. I like Calum, he’s done so well this season that Danilo’s place in the team is in jeopardy. But he’s not established himself yet. I tell him to wait and see what happens, but he’s not happy. I suggest that we can improve his contract, but he’s still not happy. I tell him to stop banging on and focus on his job and, predictably, that only makes him angry. All of a sudden, Danilo’s place in the team is no longer in jeopardy. 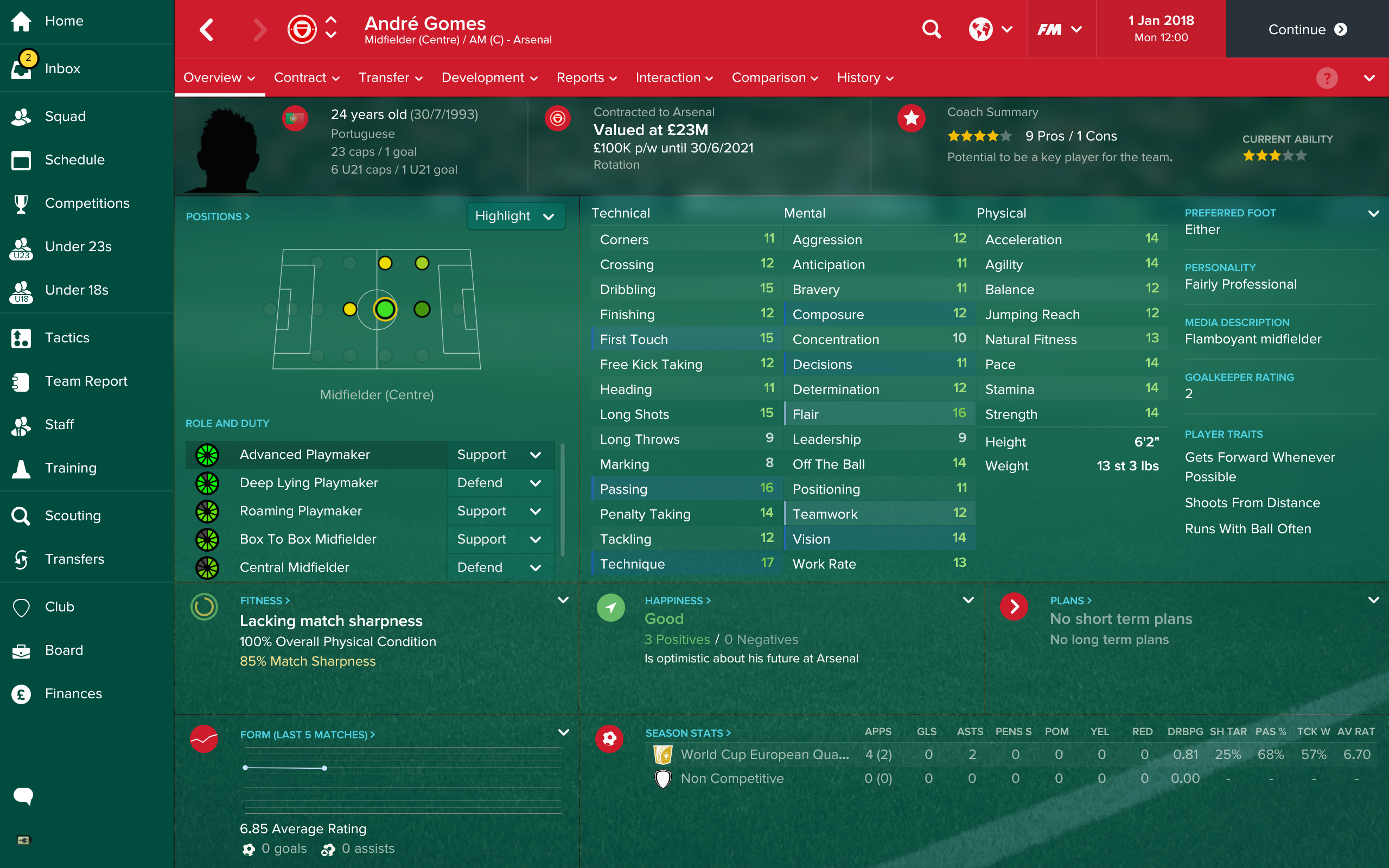 I’m not going to do much business in this transfer window, but I do like a bargain. Welcome to Arsenal, Andre Gomes. Yes, yes, I know he had a tough time at Barcelona in real life, but look at his numbers here. That’s a talented footballer and for £8m, that’s an absolute bargain too. I have four good midfielders already, but Santi Cazorla is 33, declining rapidly and will be out of contract at the end of the season. With so much at stake this season, you can consider Gomes insurance against injuries or even steeper decline, and he can consider this an audition. I still have £80m in the war-chest for the summer, should he fail me.

From kick-off, it is apparent that I have a clear advantage over Watford. I have the squad depth to ensure that all but three of my starters are above 95% fitness. They have no such luck and they’re absolutely knackered. After five minutes, I ramp our tempo up to the maximum to try to exhaust them. Adrien Rabiot smashes home the opener early on, Alexis Sanchez adds another, tapping home a low cross from Ainsley Maitland-Niles, thank you Ainsley, and then the little legend latches onto a smart pass from Aaron Ramsey to make it three.

That means I can replace tiring legs and settle in for a comfortable second half. And that’s exactly what it is. Andre Gomes appears to showcase a few nice flicks, Sanchez has a chance to complete his hat-trick, which he uncharacteristically spurns. And Watford never get back into it. 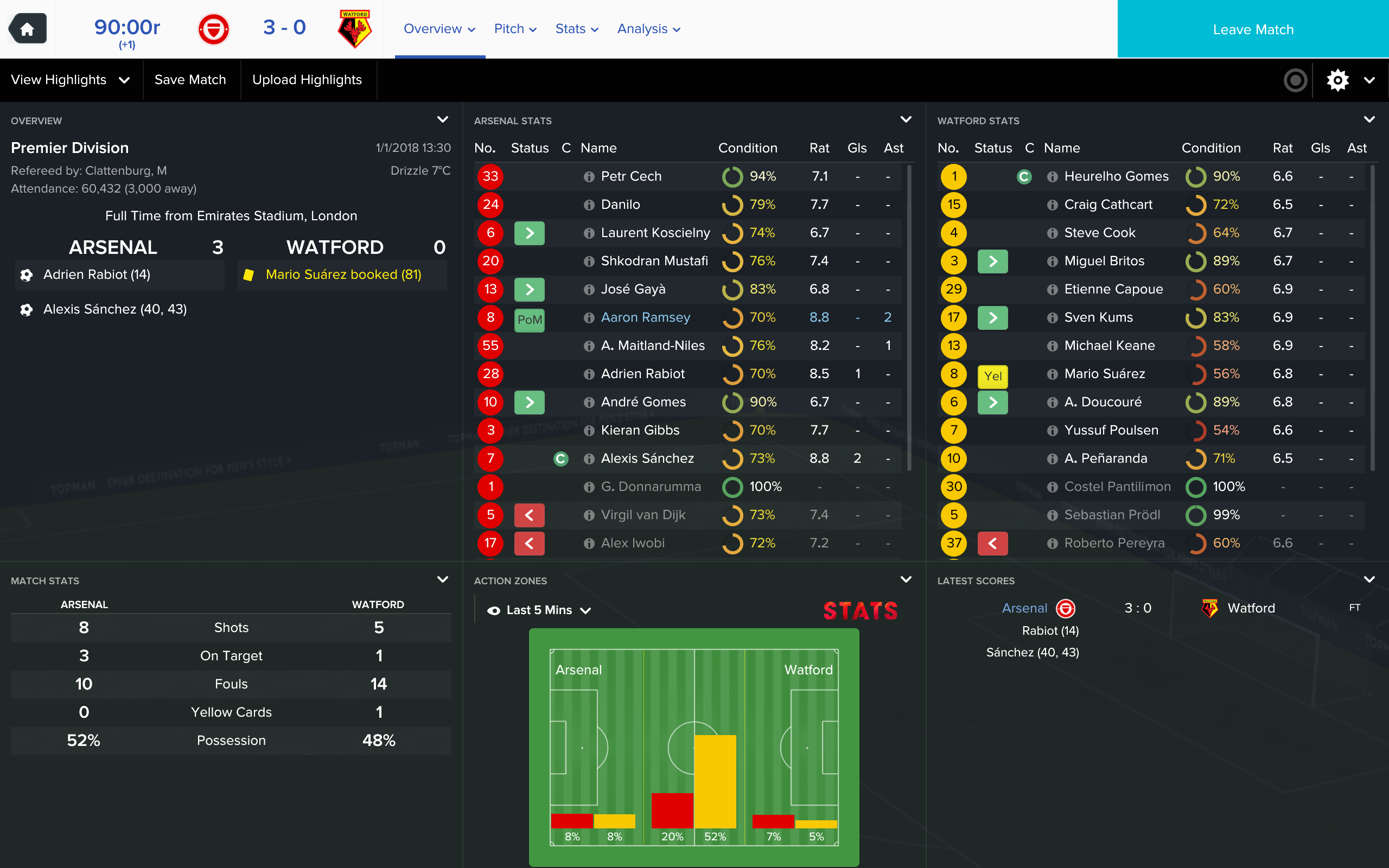 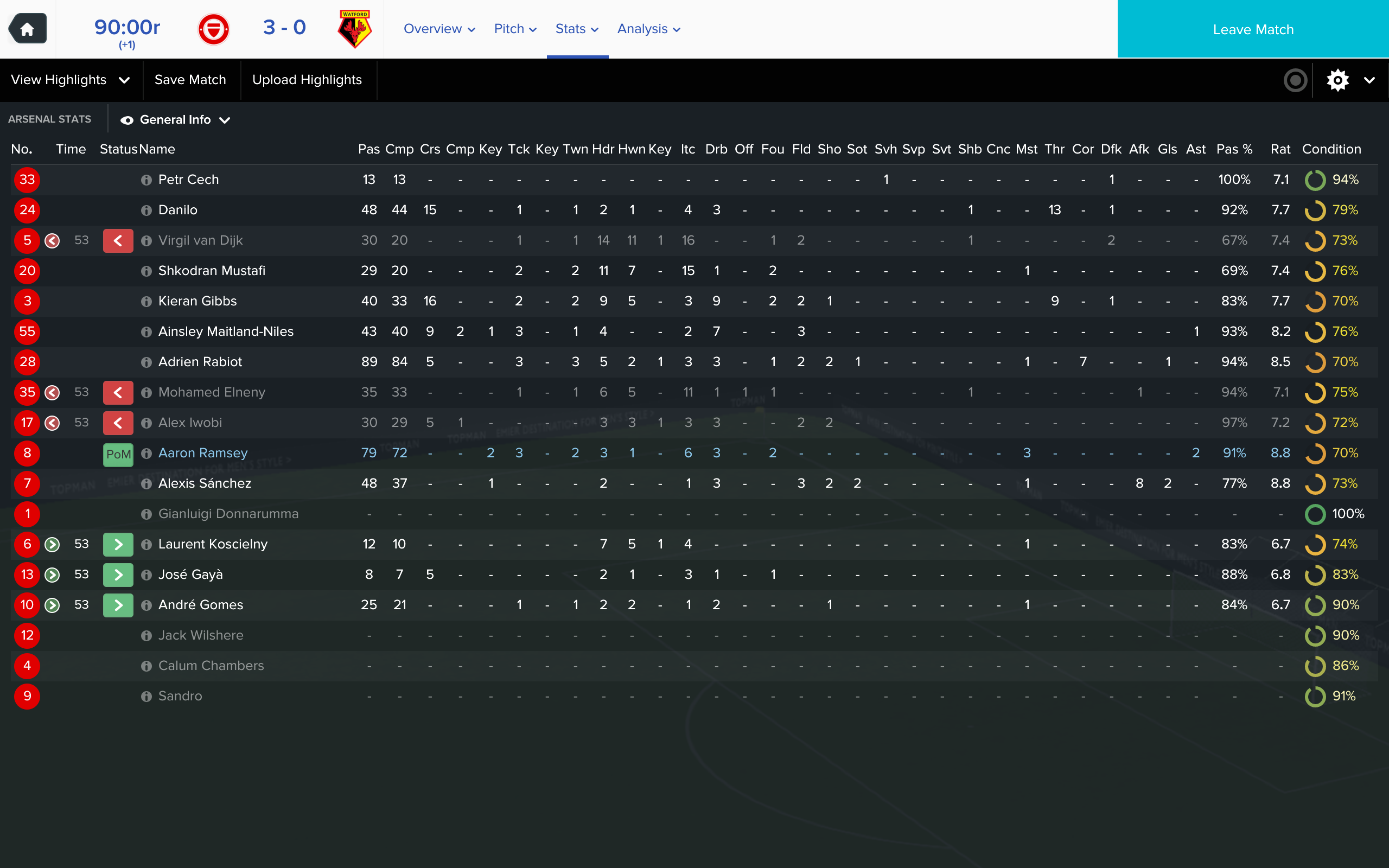 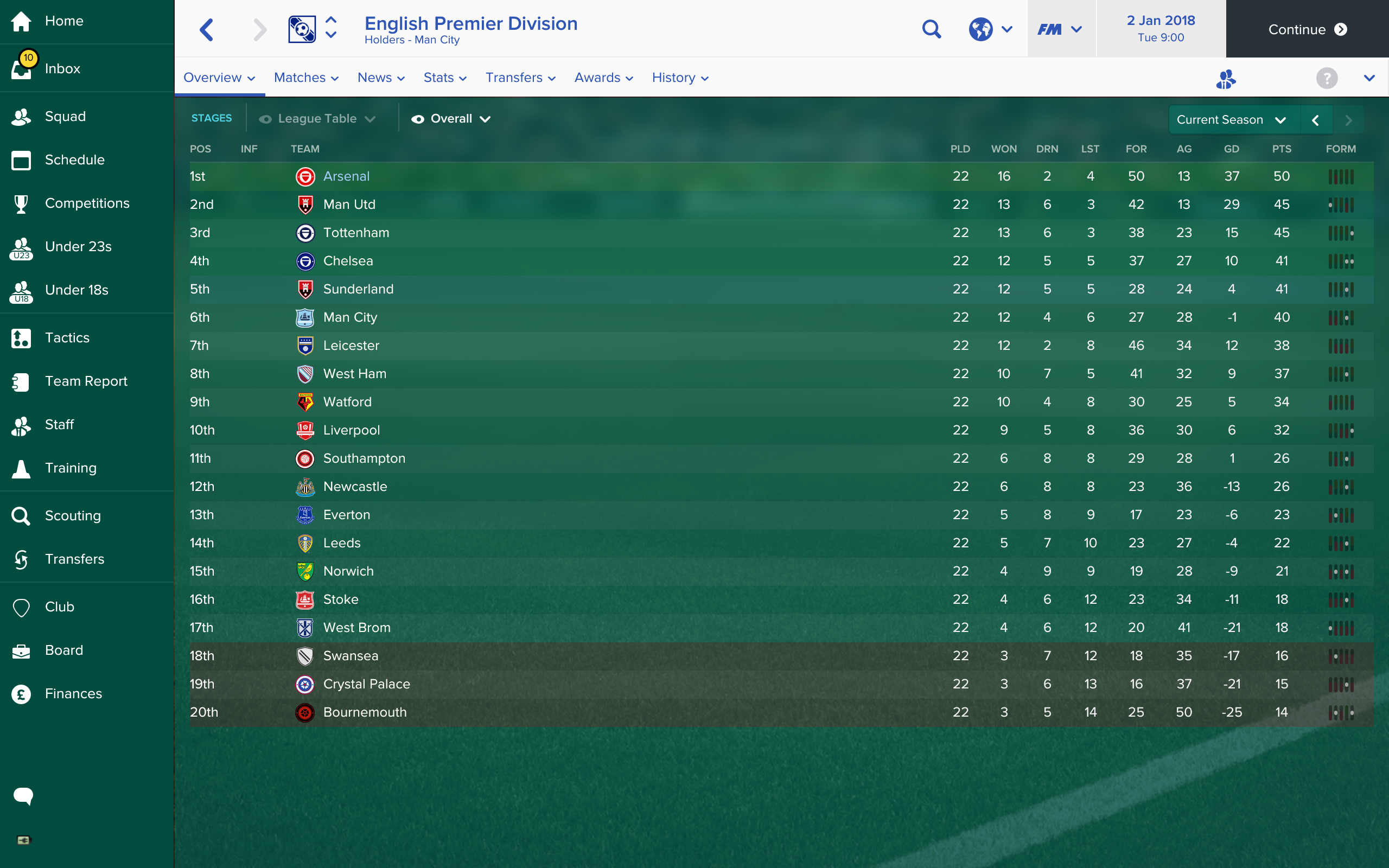 I’m delighted to say that it’s time for the FA Cup because I have absolutely no intention of taking this competition seriously. We are five points clear at the top of the table and heading into a period of time when weekends off will be few and far between. If my fringe players beat Blackburn Rovers and progress, good for them. If they don’t, I will not give it even a moment’s thought. I’ll just book a nice hotel in the sunshine for all of those weekends off.

In other news, Marcelo Bielsa now has every weekend off. Liverpool’s failure to beat Bournemouth at home marks the end of his reign. They never knew how good they had it with Alex. It’s been quite a week for this sort of thing. Manchester City have sacked Pep Guardiola too.

There are rather less dramatic changes at Arsenal as I’ve tweaked my squad a little this month. With Andre Gomes in place, there’s no need for Josh Dasilva to be hanging around with puppy dog eyes. He can go out on loan. Calum Chambers is clearly a better right-back than a centre-back, so that means the transfer list for poor Mathieu Debuchy. And so with only three centre-backs, I’m going to bring recall the promising Ben Sheaf from loan for…erm…extra protection. 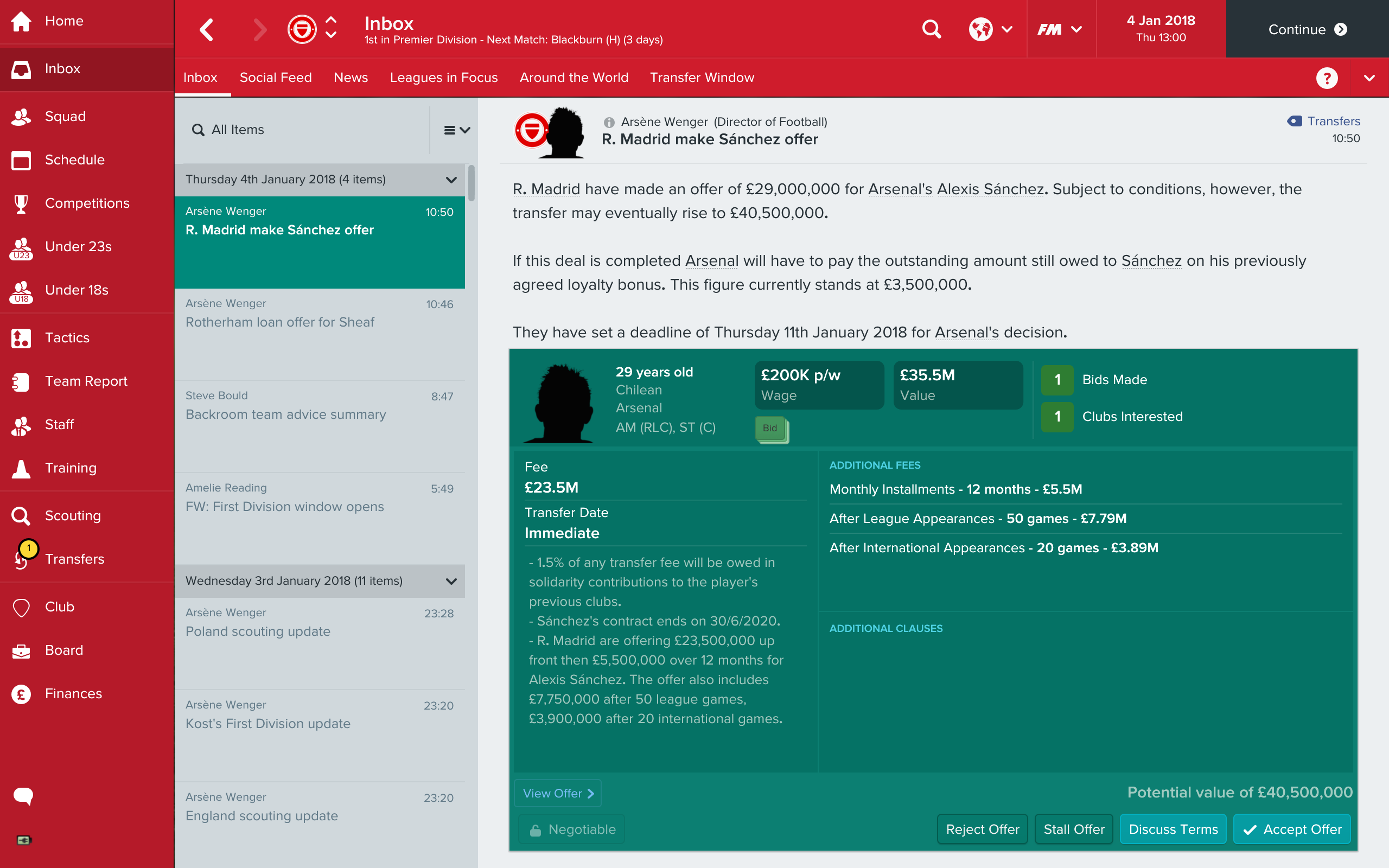 There’s just enough time to laugh heartily and hang up the phone on Real Madrid and then it’s off to the cup game. 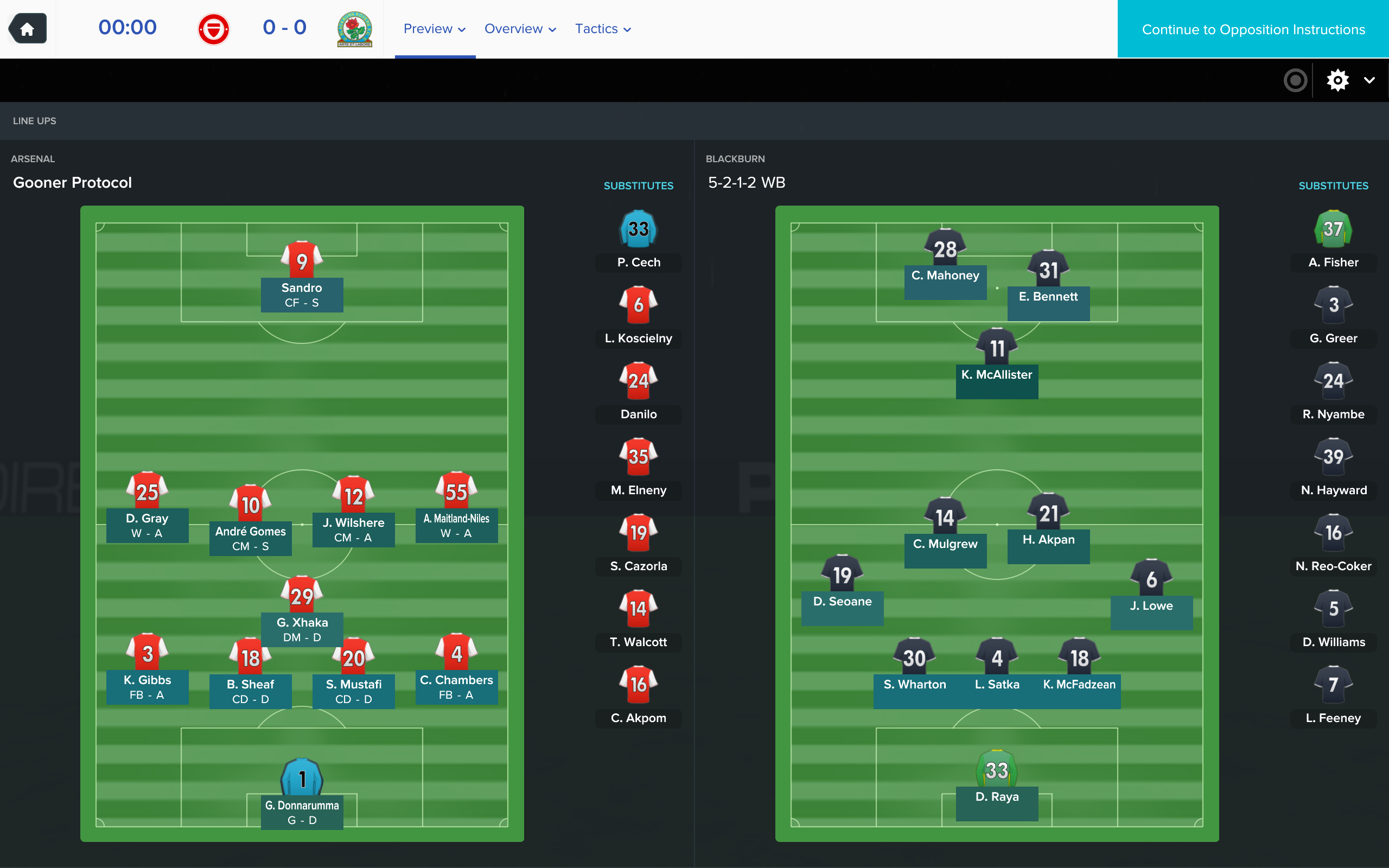 What might have been an interesting challenge is ended after ten minutes when Hope Akpan lunges in with both feet up on Andre Gomes on the halfway line. It’s a disgusting, needless challenge and Akpan is rightly shown a straight red card.

I had started out in Gooner Protocol, but after that sickening attempt to cripple my new signing, I shift up to Klopp Protocol. We hit the post twice and miss one open goal before Demarai Gray opens the scoring midway through the first half. Wilshere, celebrating a new two-year contract, adds another shortly after the break, Sandro smashes in a free kick on the hour and Sheaf heads home a corner on his debut to wrap things up. Lovely. 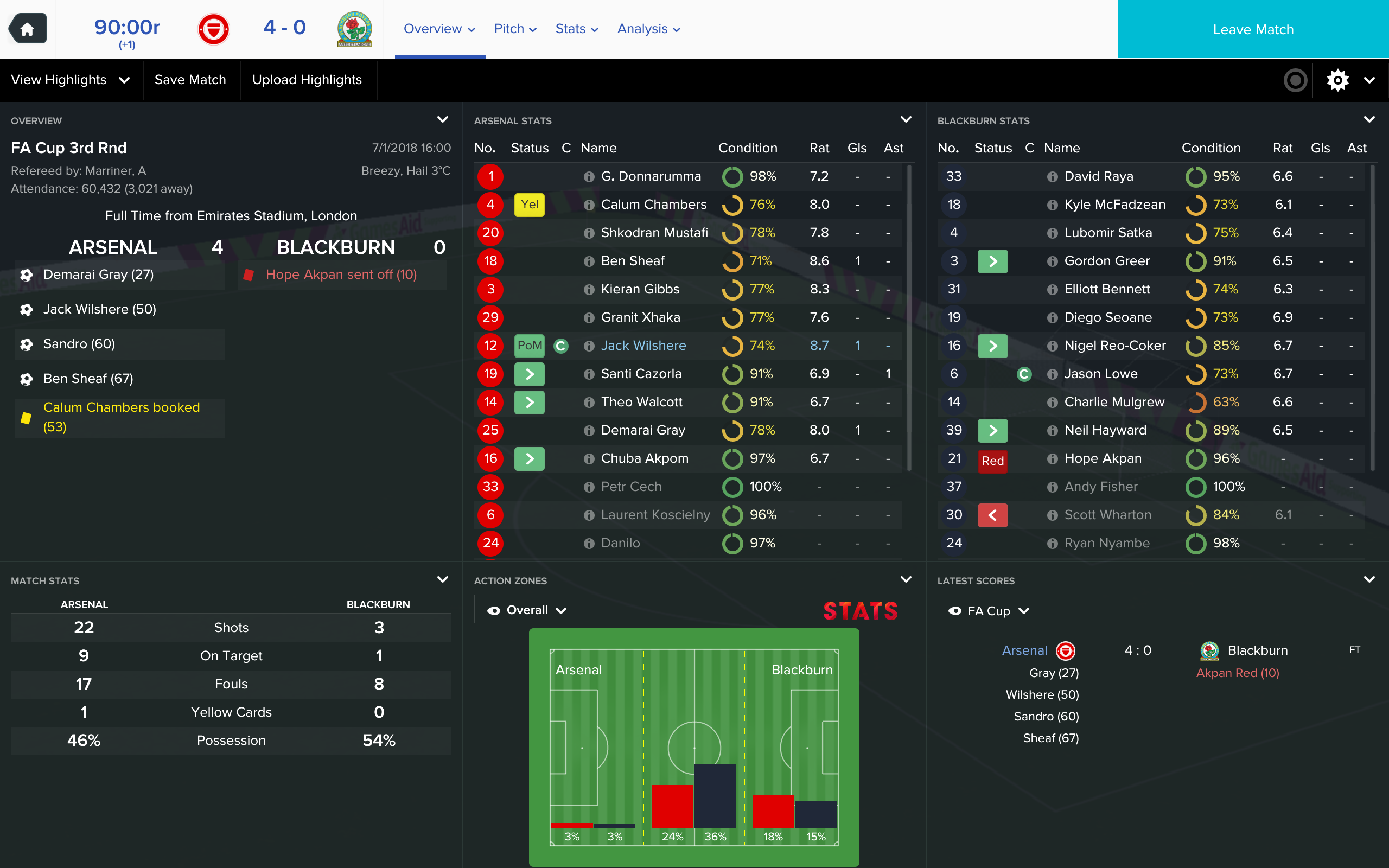 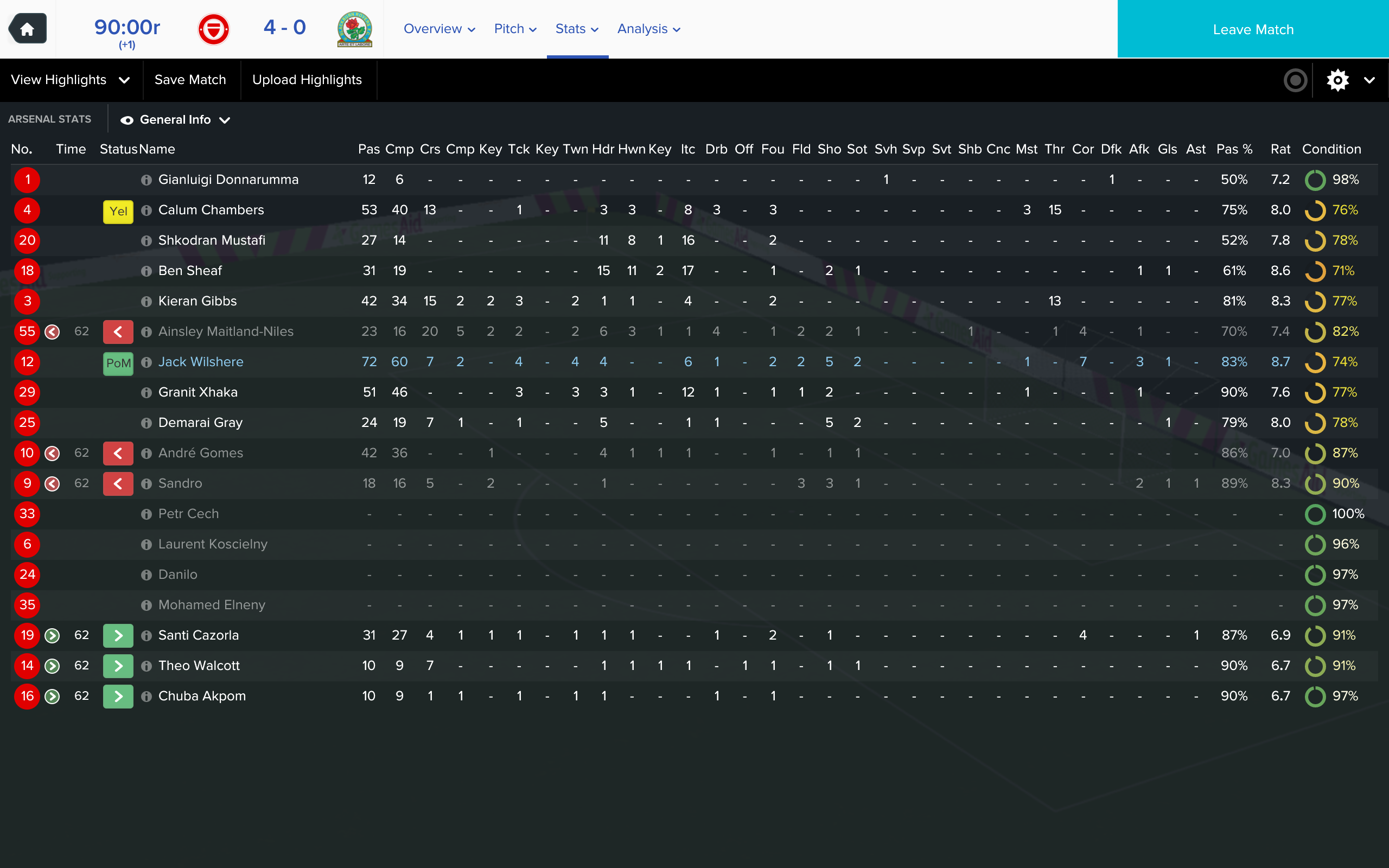 I was in two minds as to how to approach the League Cup semi-final tussle with Sunderland, but we have Manchester City in the league on Saturday and that’s made my mind up. The fringe players will continue, at least in the first leg. And if any of them are disappointed about missing out on a chance to play City, they’ll be pleased to know that we’ve got them again in the ultimate no-lose FA Cup fourth round draw.

I’m a little concerned about Sunderland. Bafflingly, they’re fifth in one of the most competitive Premier League seasons in living memory. They haven’t even added anyone particularly spectacular to their ranks. We must be cautious. In a way, I’m rather relieved that Sheaf’s cup-tied status necessitates a return for Laurent Koscielny. 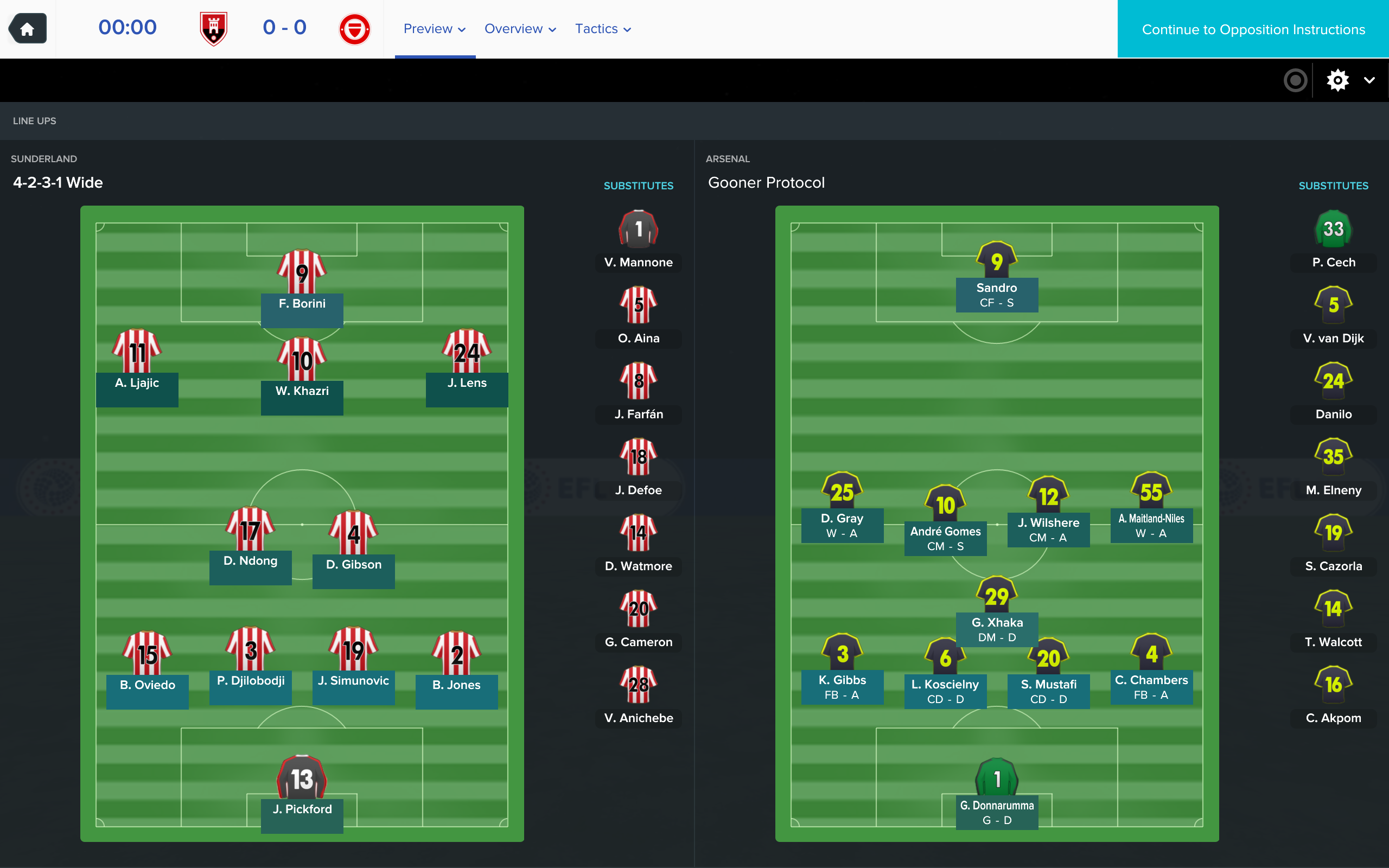 Well, I still don’t quite see what it is that Sunderland have done, but they’re doing it very well. They control much of the game and make a lot of chances, even though few of them are very dangerous ones. We don’t need to make many to score, and we do so in the first half when Sandro whips a cross in that evades everyone except Demarai Gray at the back stick.

Unfortunately, we get well and truly Djilobodjied in the second half when he rises like an attack helicopter over my defence at a set-piece and nods the ball down for Adem Ljajic to tap in the equaliser. Not to worry. They’ll have to go back to our place now. 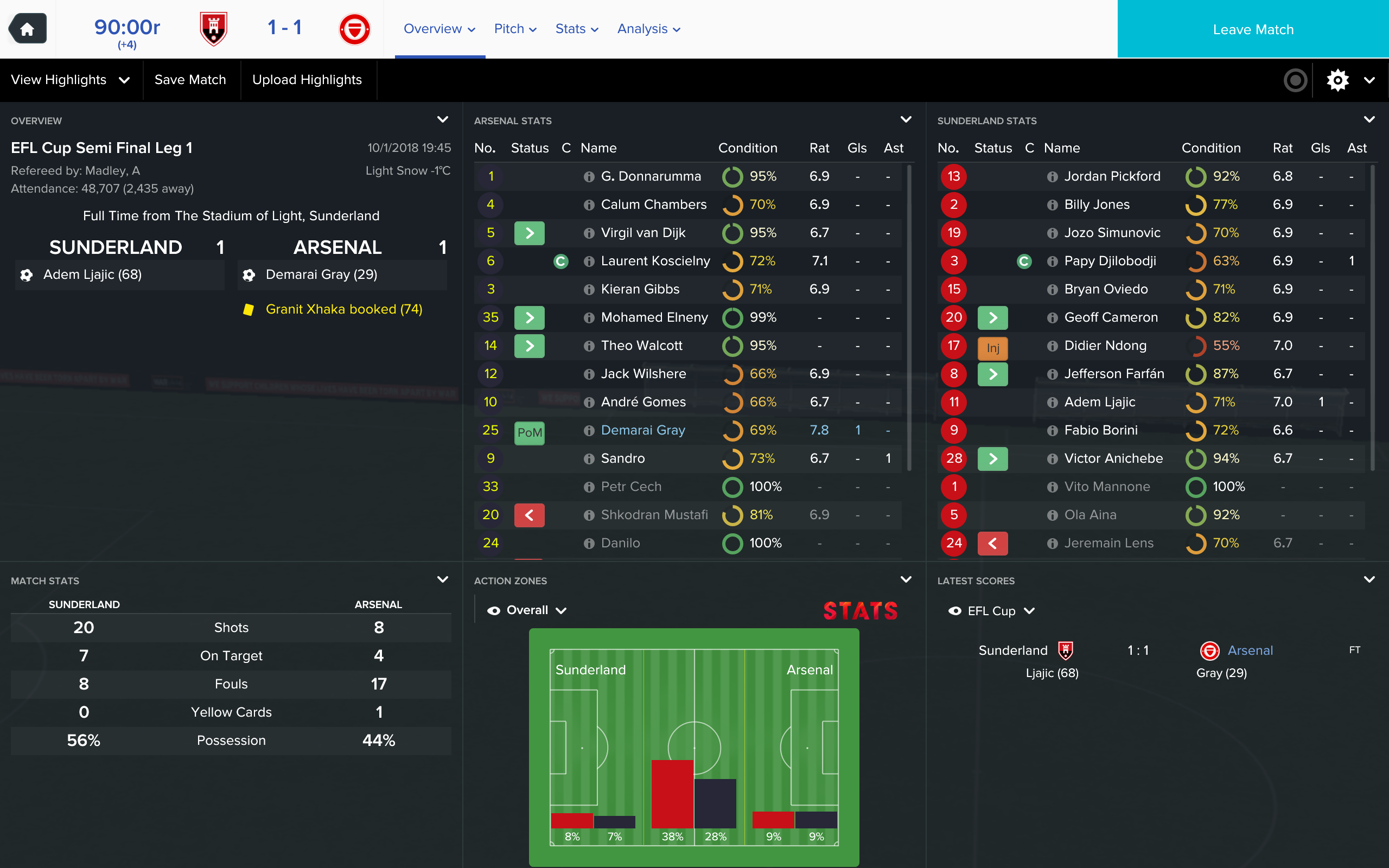 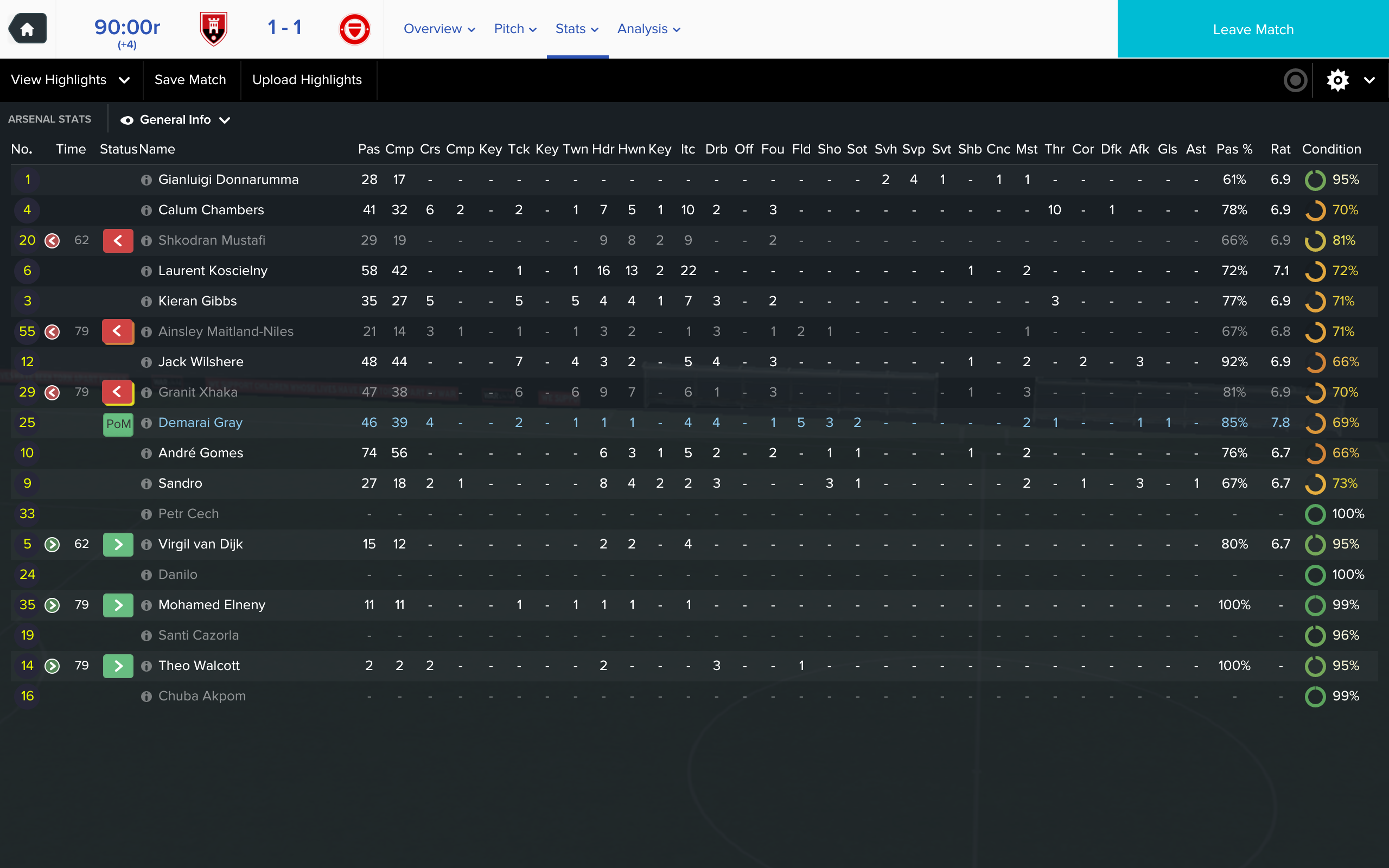 I’m delighted to say that I’m able to draw upon an almost completely fit, first choice starting eleven for this one. And I’ll need it. Rafa Benitez is the new manager of Manchester City and whatever you think about him, you can’t deny that there’s almost always a new manager bounce. I really cannot afford a new manager bounce. We play last today and everyone else won, so we need three points to keep our lead nice and healthy. And because losing will really piss me off. 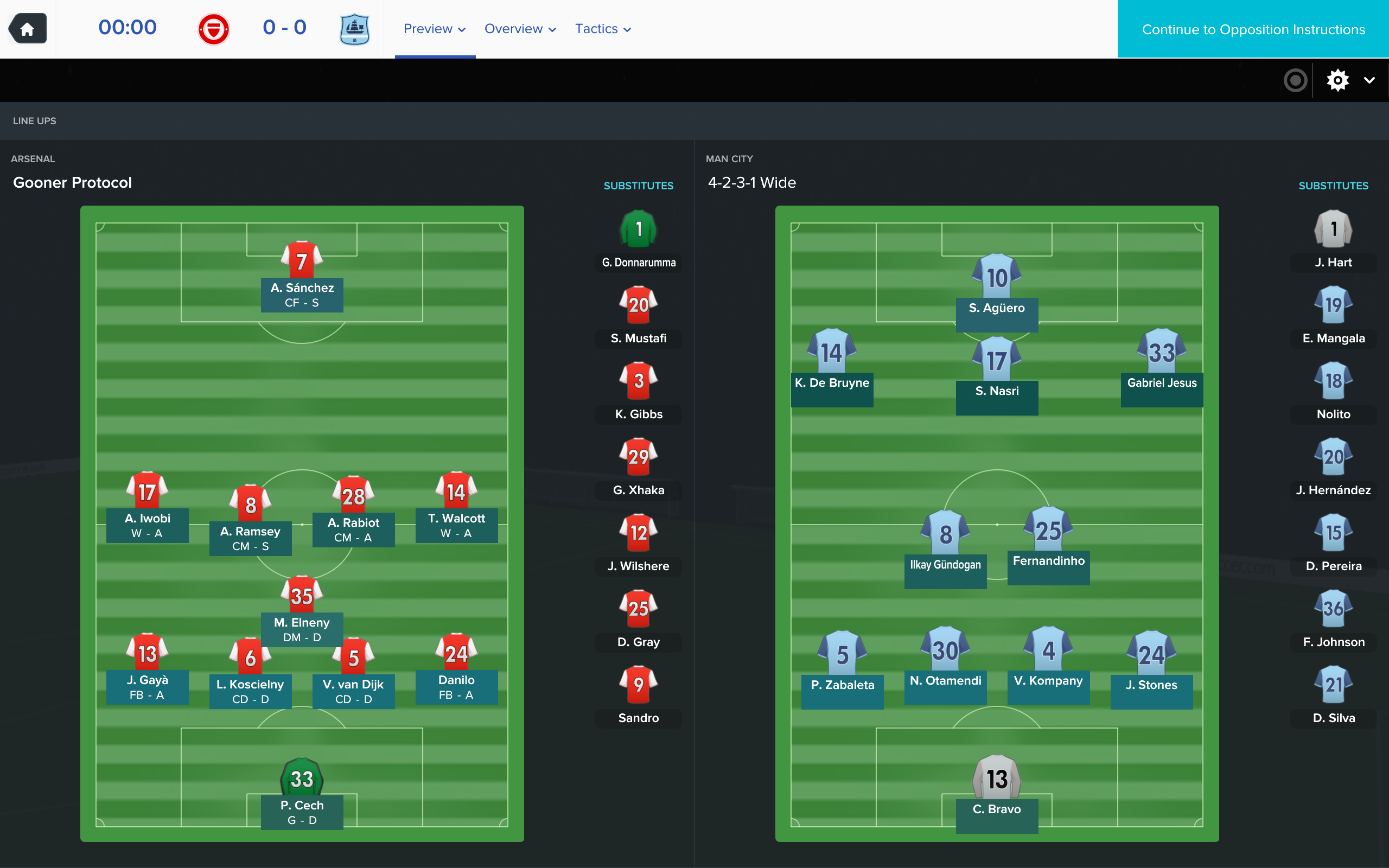 It takes five minutes for City to score and it’s a horrible goal to concede. They pass the ball quickly inside our half, a tactic that I’ve noticed seems to unsettle our players. The ball falls to Kevin de Bruyne outside the box and he drives it inside the near post, through Petr Cech’s fingers. To my right, I notice Donnarumma sit slightly straight on the bench. The rest of the half ebbs away on a gentle tide of slack-jawed complacency, something I address at the break with the mother and father of bollockings.

As is his way, Benitez tries to shut the game down by dropping his central midfielders back. I bring on Sandro for Elneny and go with two up top, a risky, but unavoidable play. We make more chances, but every time we break through their ranks we find either Claudio Bravo or the post in our way.

With 15 minutes to go, I go to the high energy, attacking Klopp Protocol, but with two strikers. We pile on the pressure and then Nolito does what our players cannot do and blasts the ball past Bravo in a goalmouth scramble. With two minutes to go, Jose Gaya zips a low cross into the six yard box, but Sandro can only hit the post. We should have won. We could have lost. In that respect, a draw is just about acceptable. 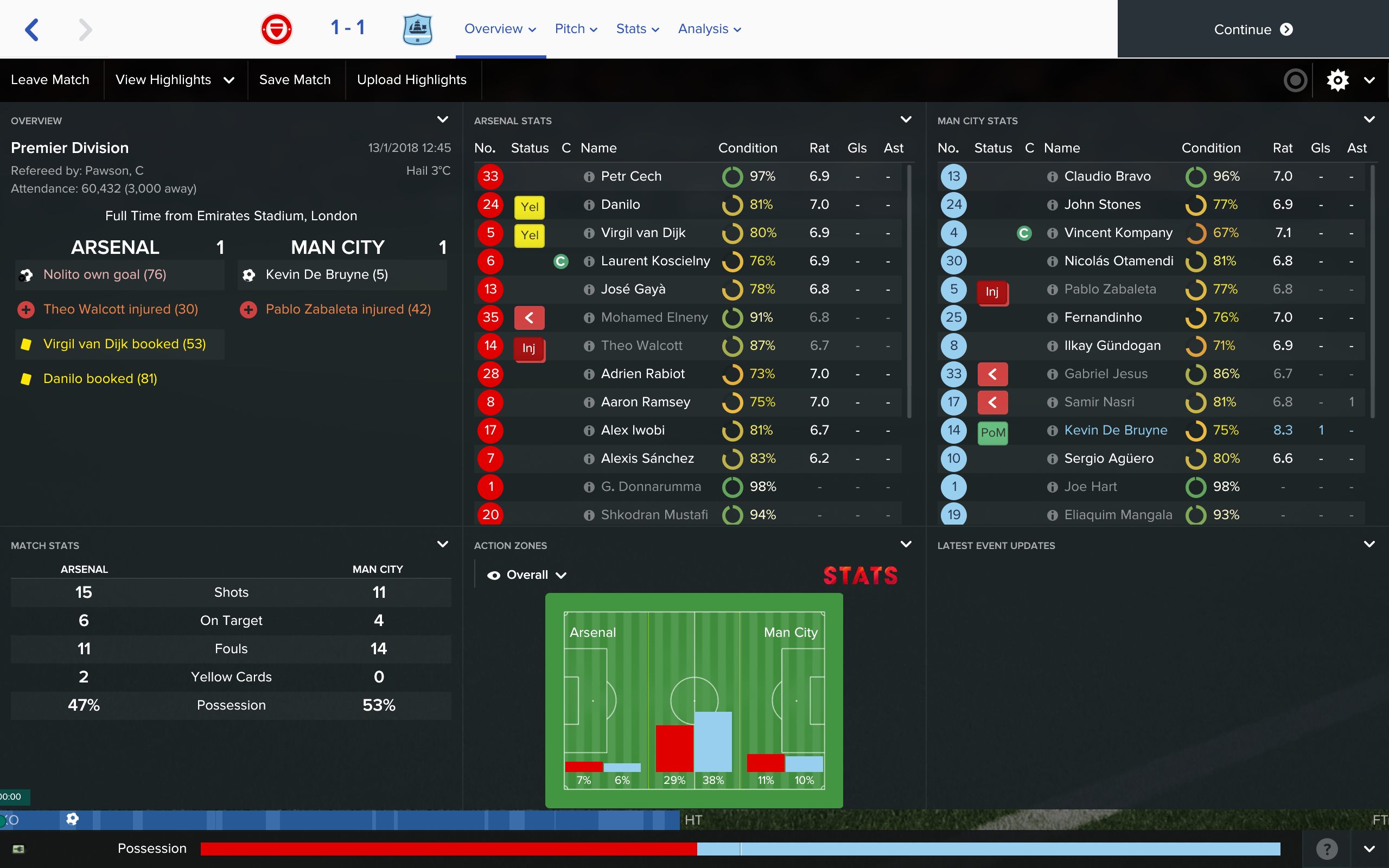 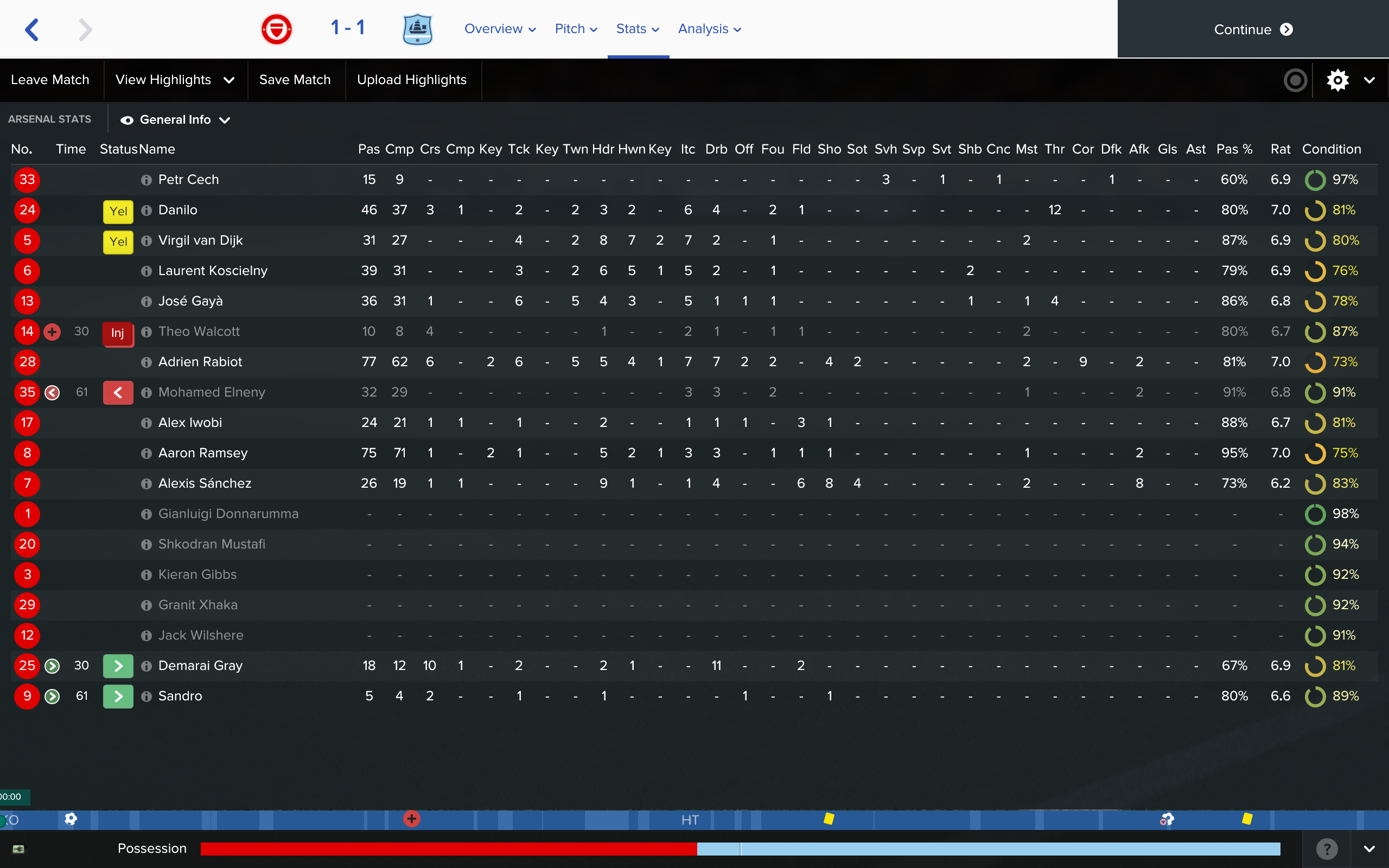 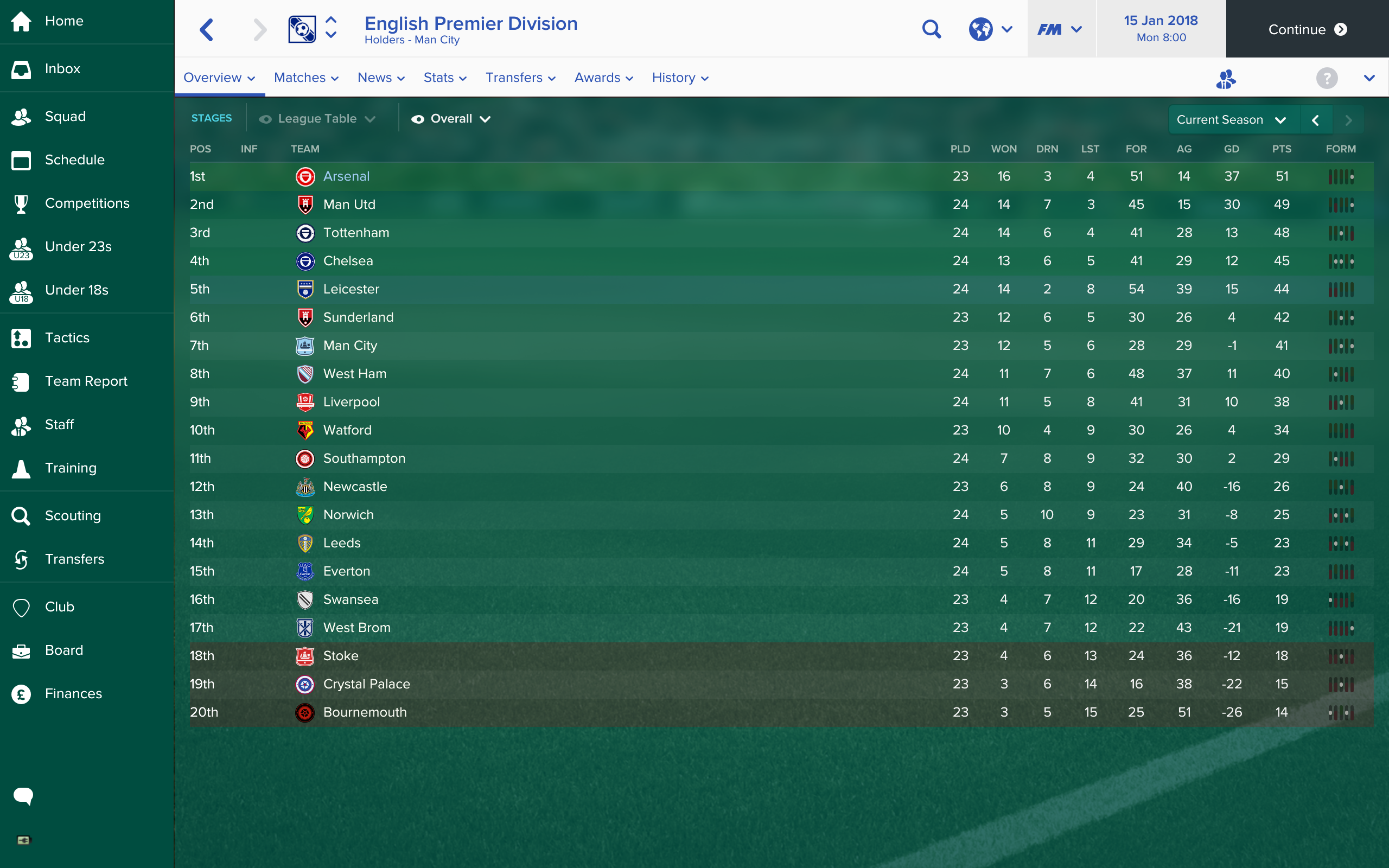