We’ve had a reasonable start to the season, lots of very good results sprinkled with some very poor ones, but our crossing still really concerns me. Crossing is at the heart of everything we do. We get wide, we get to the byline, we pull low balls back and we should, given the players’ instructions, have at least three targets every time. That’s how we went six months unbeaten last season. That’s how we’ll win silverware. There’s just one problem. The morons in the red shirts keep spooning their crosses up in the air. That would be fine if Olivier Giroud was still here, but I sold him because he kept moaning. 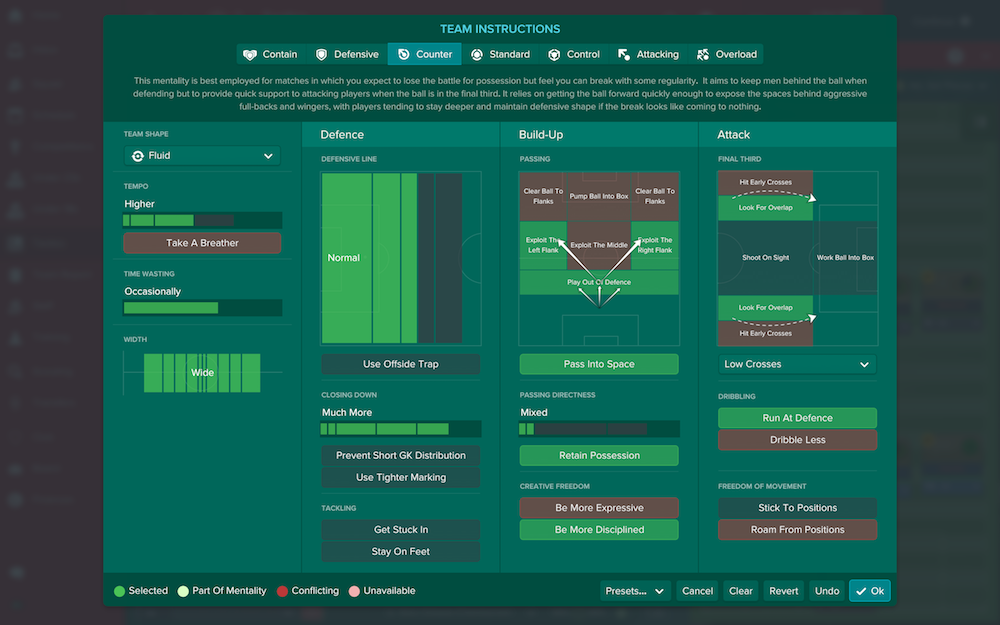 A number of you suggested alterations to the tactics to impose a little more discipline, and I’ve made it so. I’ve also cranked up the tempo a little bit, because I think we can handle it. There’s still a certain amount of caution here, not just in the shape, but in the willingness to keep possession and position until the time is right to strike. We defend first, soak it all up and then hit them. But you know what Sun Tzu said: “The art of war teaches us to rely not on the likelihood of the enemy’s not coming, but on our own readiness to receive him; not on the chance of his not attacking, but rather on the fact that we have made our position unassailable.” Mind you, he never had to work with Theo Walcott.

After a long international break, we get back down to business with the visit of Norwich. They are very open for a newly promoted team and I think they might just play straight into our hands. I am distinctly unamused to find that Adrien Rabiot, Alexis Sanchez and Virgil van Dijk, or as I like to call them, “My Three Best Players,” have all come back from international duty below 90% fitness. Danilo, Walcott and Mohamed Elneny are similarly drained. With PSG on Tuesday, I’ll have to play the long game here. 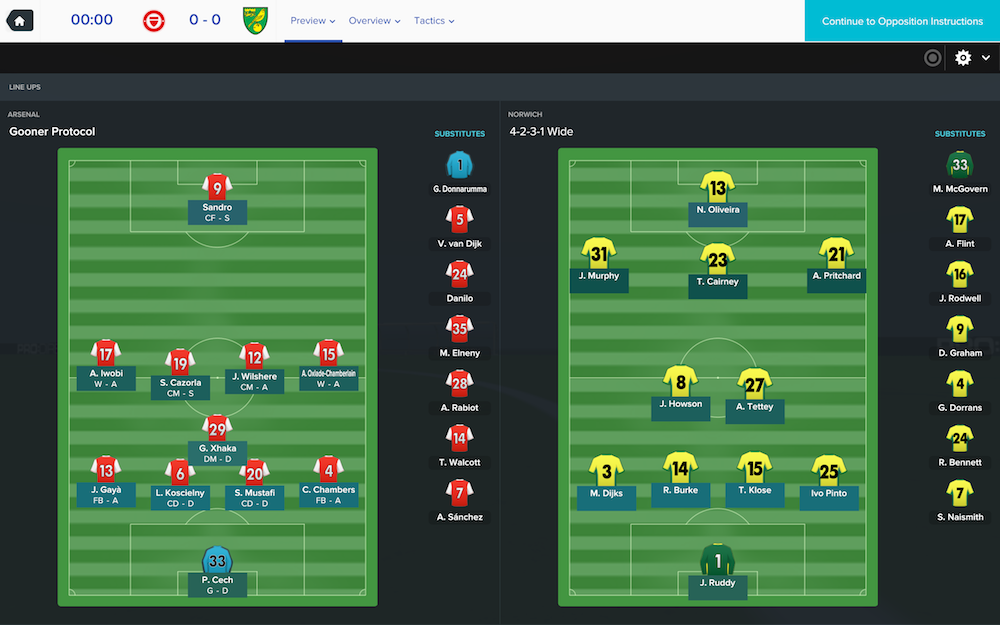 It’s funny, this game. Everything can be going perfectly well and then something happens, something innocuous, and everything you’ve built starts to crumble. Was Laurent Koscielny’s underhit backpass against Leicester last month that something? We did very little wrong against Norwich. We made enough chances, we had two goals disallowed for offside in the last ten minutes and I’m still quite cross with Sanchez for shooting when he could have cut back to Sandro in injury time.

And speaking of crosses, the imposition of discipline seems to have helped. Jose Gaya, who had completed just two crosses all season before today, completed three here. But we didn’t score. For the second game in a row, we didn’t score. Did I say this game was funny? Silly me. I meant it’s fucking infuriating. 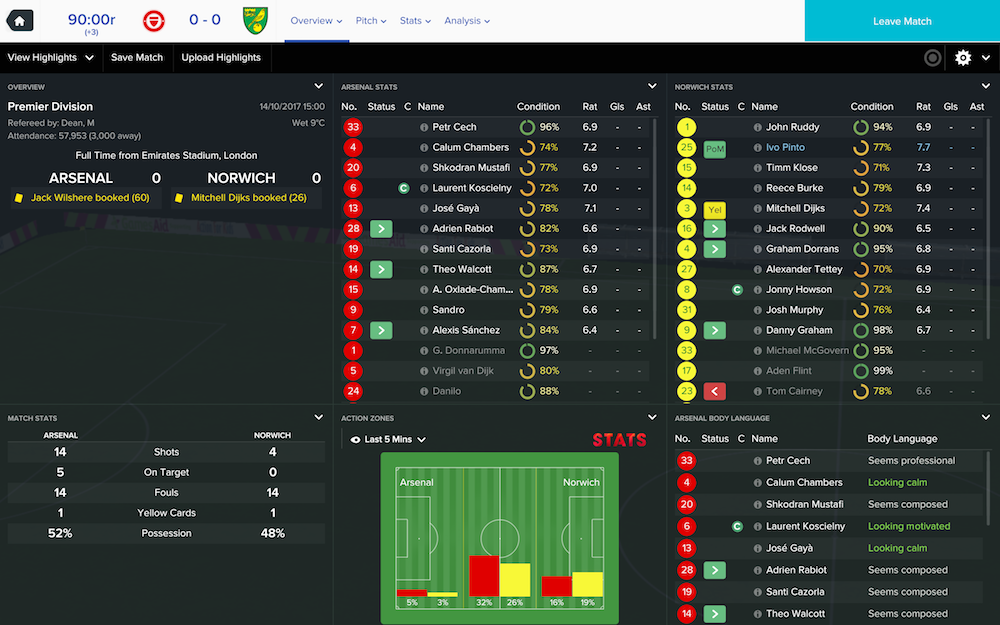 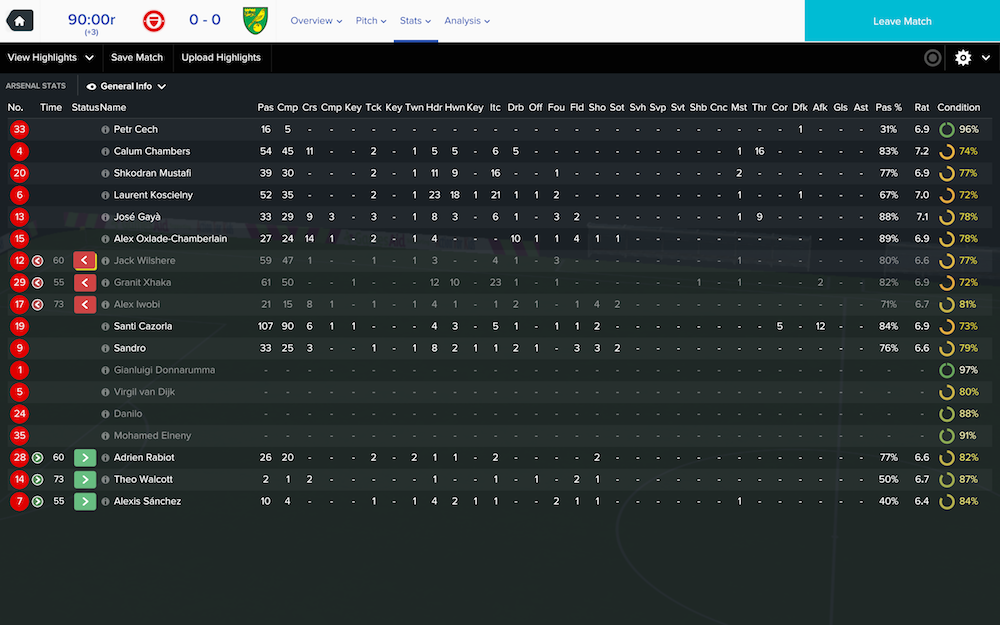 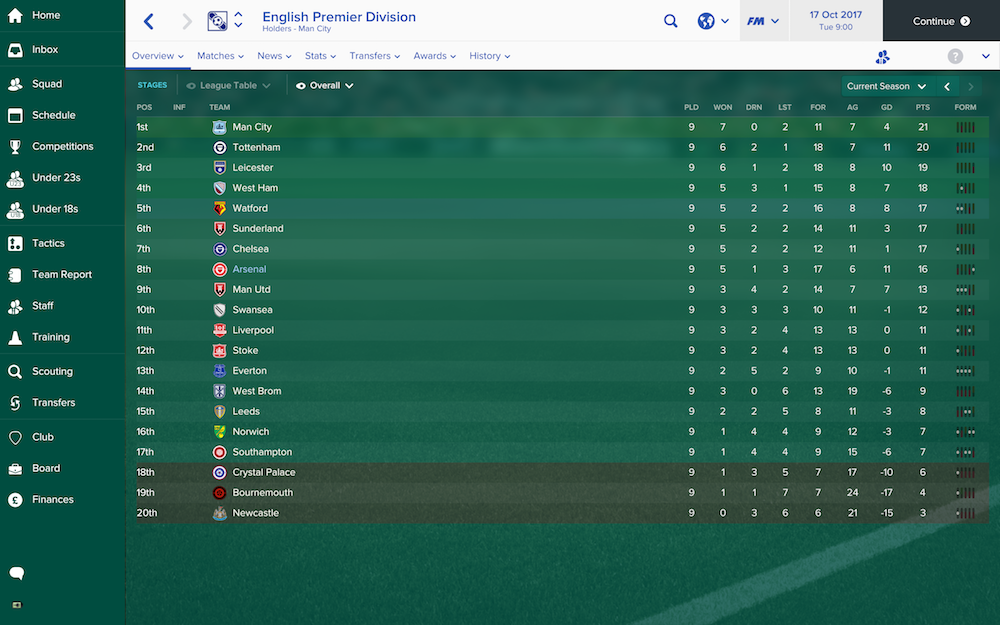 We could really do with a result against PSG. Not just because it’s the Champions League and a win would almost secure our place in the next round. But just to boost confidence. There’s a lot of yellow morale on my screen now and that’s never good. I tell you what’s worse…Tottenham at the weekend. We can’t go into that if we’re tripping over our chins. Full strength team here. 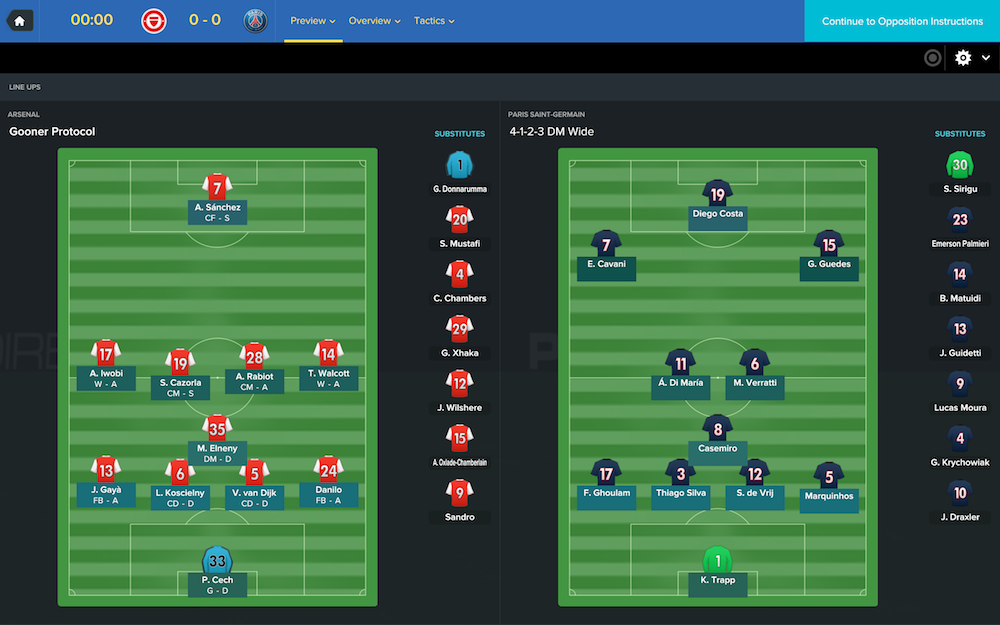 I’m starting to lose faith in this. This team has been built to a specific purpose, but these players are either wilfully disobeying orders or they are all as thick as mince. Low crosses. That’s what we do. Or at least, that’s what we used to do. But no, everything is high. Including this effort by Danilo, blatted up when we were trailing to Edison Cavani’s freakish opener. Six men in the box, two of them in front of their defenders, and he goes tall. 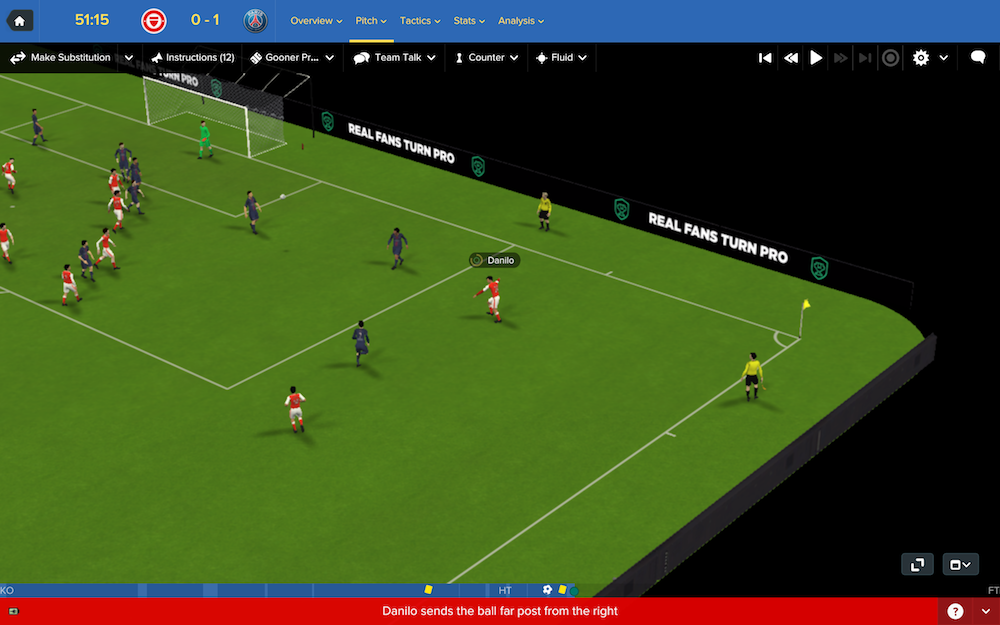 Curiously, that cross actually led to our equaliser. PSG struggled to clear their lines, the ball fell to Sanchez and he smashed it in. But that’s not the point. That’s just not the point. If they followed orders, they’d win games. But they’re not following orders. And if I don’t beat Spurs at the weekend, that will be four games without a win. 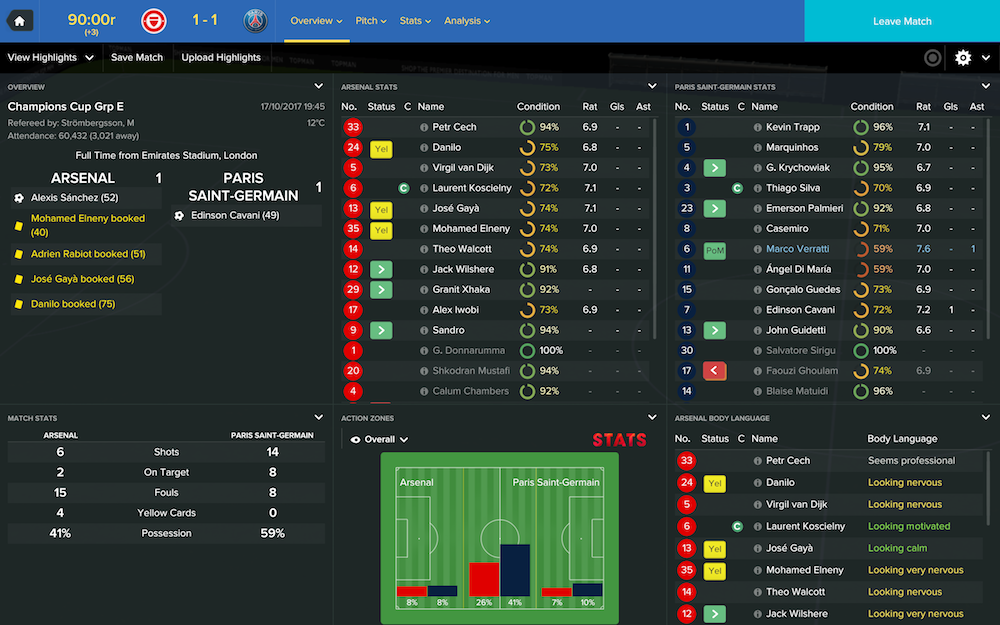 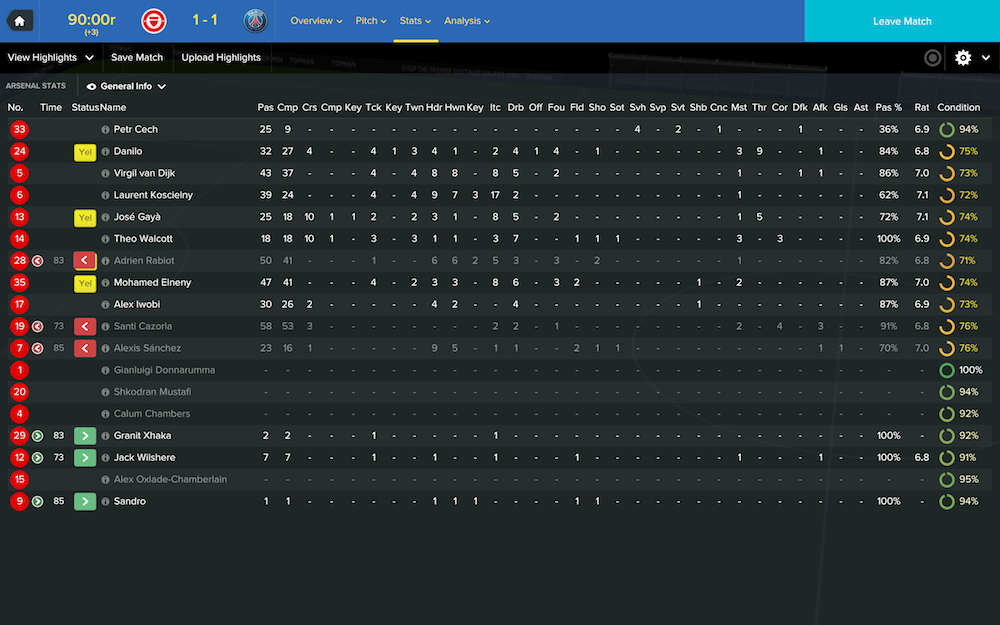 Unfortunately, there’s not too much I can do. With just a couple of days preparation time, ripping up the plans and starting again would be suicidal. I can only hope that their thick skulls eventually absorb what I’m asking of them. It’s not hard. Hold your position. Let them come at you. Let the gaps open up, break fast, break wide, cross low, score goal.

I don’t think there’s any question of a lack of quality here. This is a good side. There’s no questioning the tactics either. It’s essentially the same scheme we used last year. I have to have faith that something clicks soon. I’m not sure I could survive losing to Spurs. 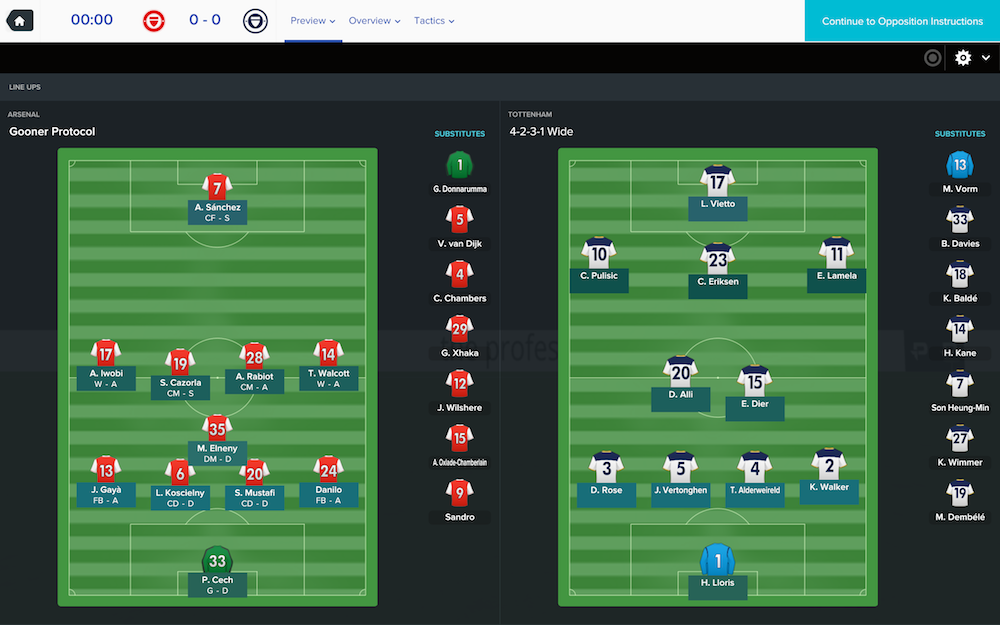 Line them up. Line them up. The dissenters and the rebels, line them up in front of me. Strip them of their lands, shave their heads, dress them in sackcloth and bring them to me, I wish to gaze upon them. I wish to see them squirm like the worms they are. Let us see who can meet my gaze now. If they kneel at my feet and pledge their allegiance, I might let them scrub my steaming piss from the floor.

We let Spurs come at us, we hit the gaps, we punished them. We actually would have scored more had it not been for things like this. 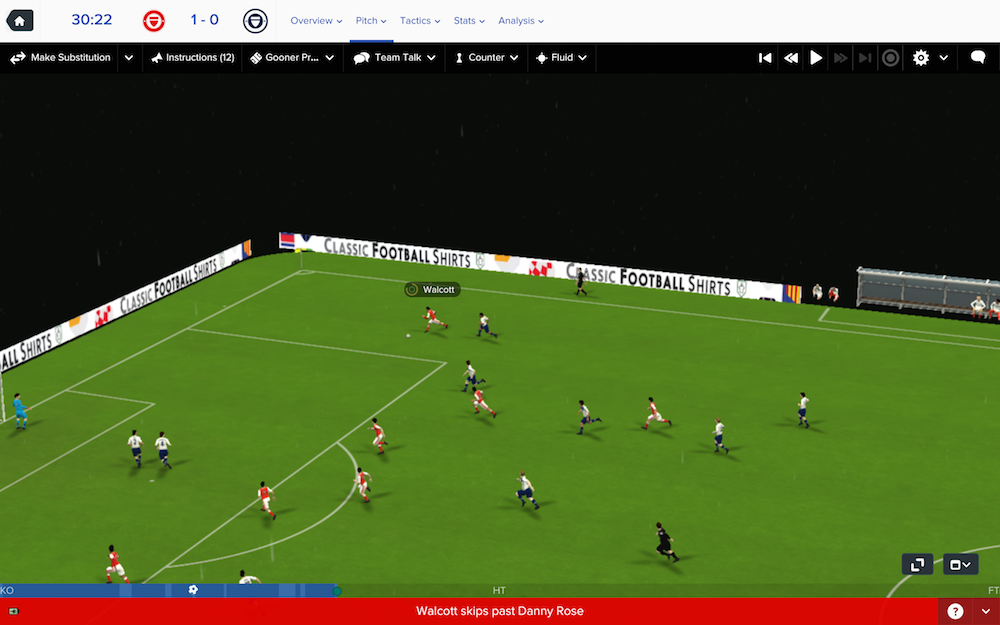 I wonder if you can guess what he’ll do here, with three options for a simple low pass that will almost certainly lead to a goal? 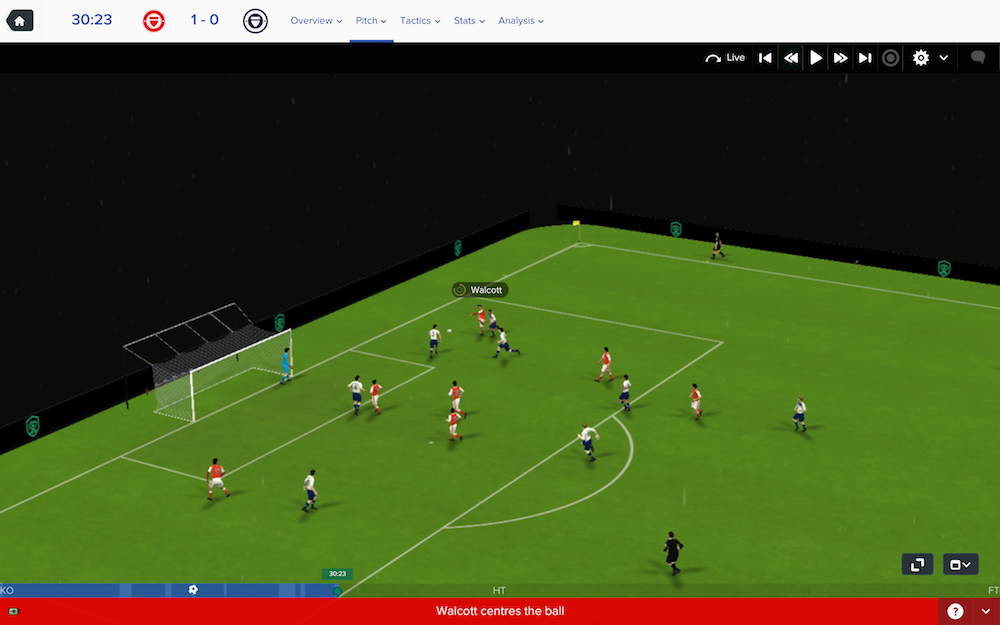 But it didn’t matter. It didn’t matter because whenever we broke through the centre, we scored again and again and again. I sincerely hope that this will be the end of our little wobble. It’s worth noting that had we beaten Norwich, we’d be top of the table now. It’s a funny old game, Saint. 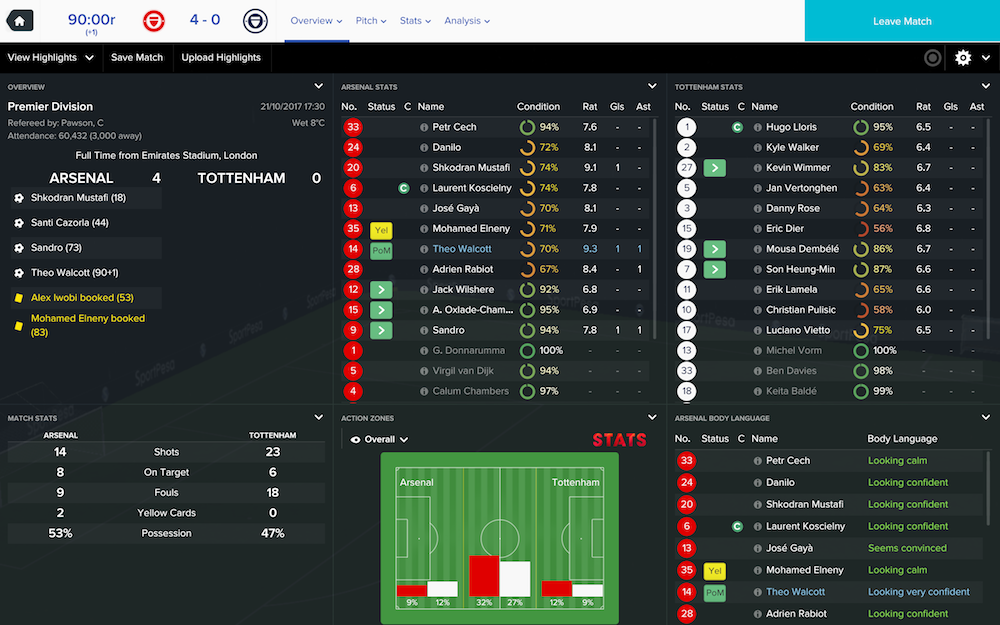 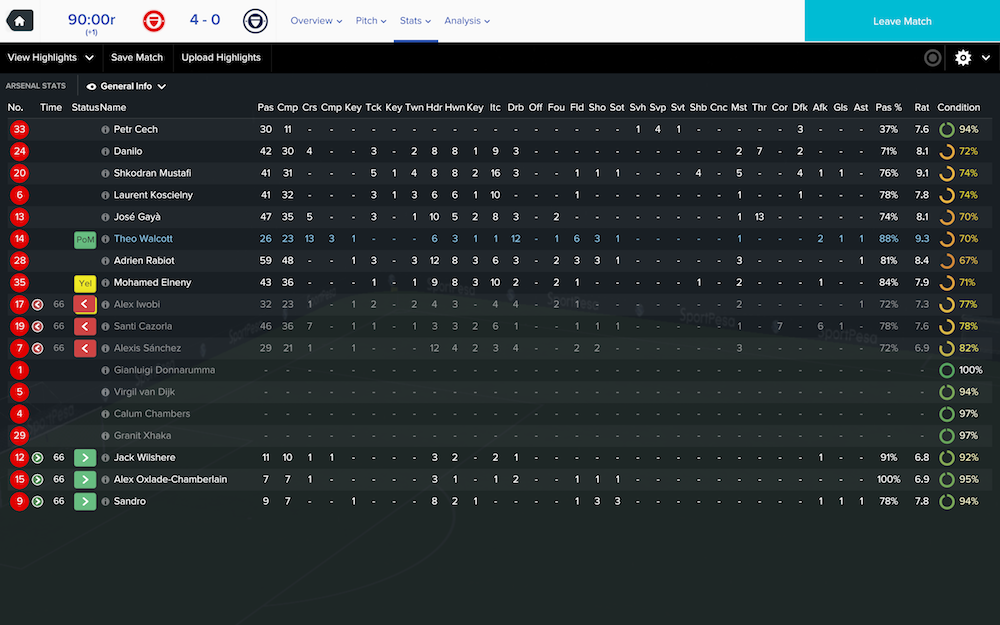 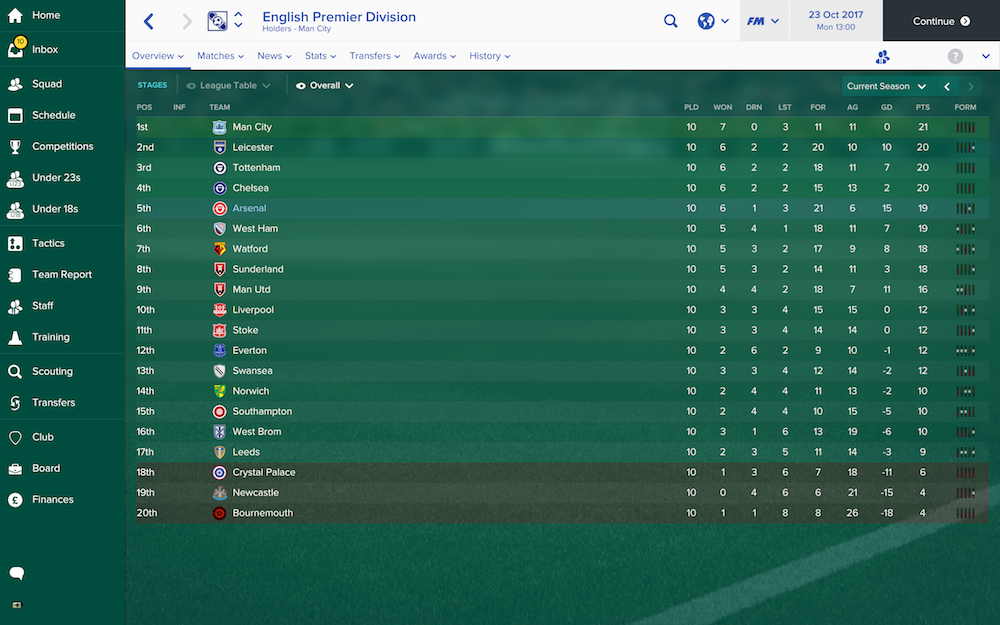 It’s West Ham in the League Cup now and there is a natural temptation to stick with the same team and build on that Spurs success. But I have to be smarter than that. We’re looking at 60 games this season, if all goes well, and I cannot come through that without some rotation.

The plan was always to use the fringe players for the domestic cups and that plan remains in place. Let us hope that these players take the opportunity to impress. 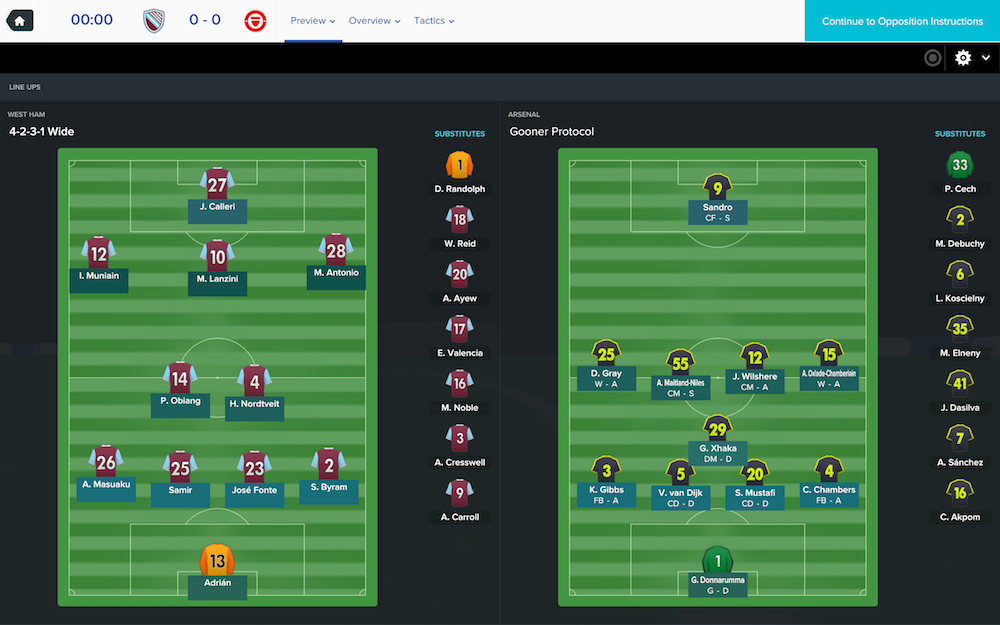 Oh my God, I think they’ve cracked it. It’s a tight, tense sort of affair with neither team gaining the upper hand until a moment of genius from Sandro unlocks the game. When a West Ham attack breaks down, Kieran Gibbs clears the ball 50 yards and Sandro takes it down with one touch on the turn, leaving poor Sam Byram wondering what on earth has just happened to him. Resisting the temptation to go it alone or toss a ball up for the ghost of Niall Quinn, he passes the ball low and square for Jack Wilshere to score. 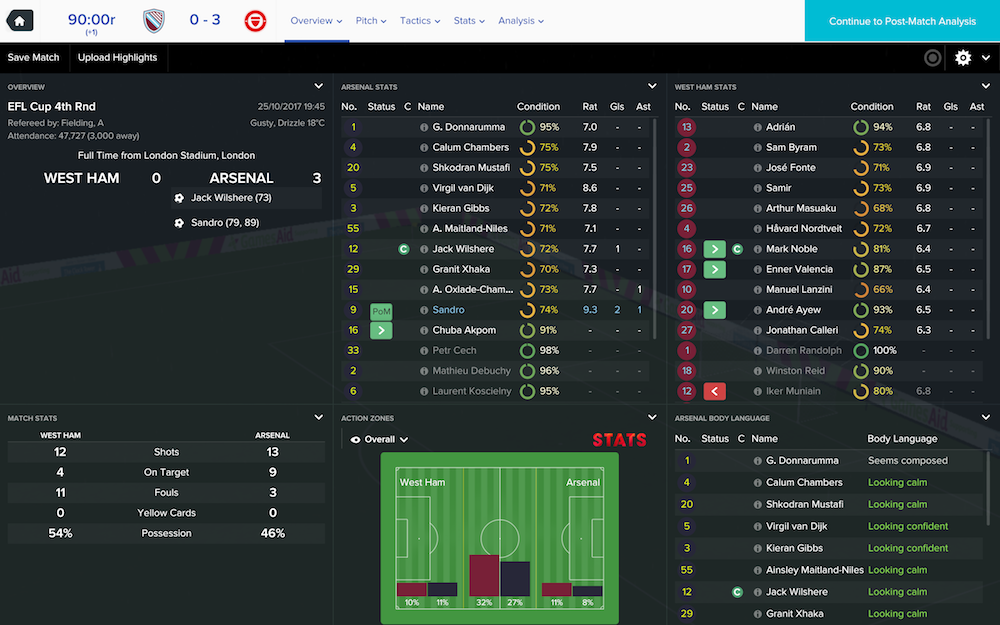 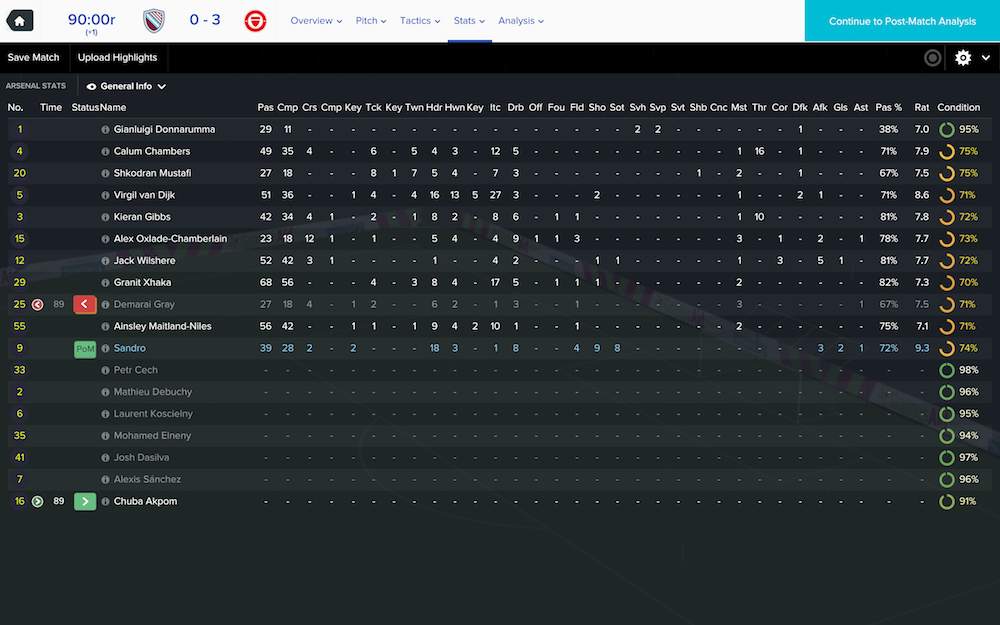 And so we close out the month with a trip to Goodison Park. We are, thanks to our rotation policy, 100% fit for this one. Unfortunately, Everton have the same policy, so there’s no discernible advantage. But will that matter if these green shoots of competence continue to push up through the paving slabs of rampant idiocy? 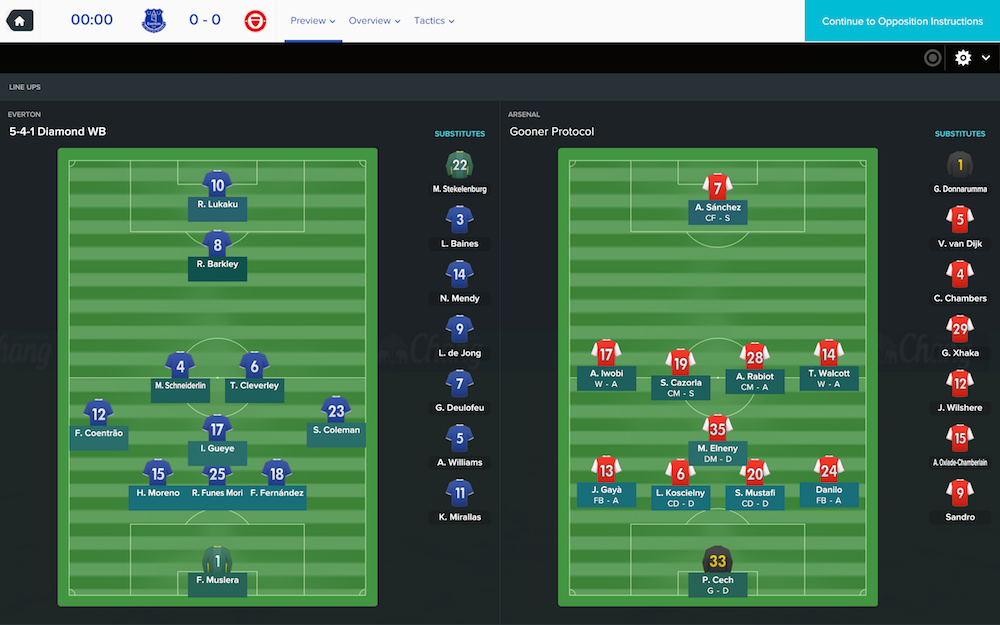 And that’s how I like to end the month. Once again, it’s a tight game. Everton don’t give up many chances, but we finally break their resistance in the last ten minutes. I have a special defensive corner routine that leaves my two quickest players up field, one deeper than the other for the speediest possible transition and it’s paid off again. Everton fail to make their set-piece count, the ball falls to Iwobi who scarpers freely up the pitch and releases Oxlade-Chamberlain into acres of space. With three runners approaching I beg him to cross the ball low. He ignores me and lands the ball right on the still-sprinting Iwobi’s head at the far post. I will let him off.

The activation of the Castle Protocol secures victory, though another Oxlade-Chamberlain cross, a low one this time, gives Sanchez his eighth goal of the season. 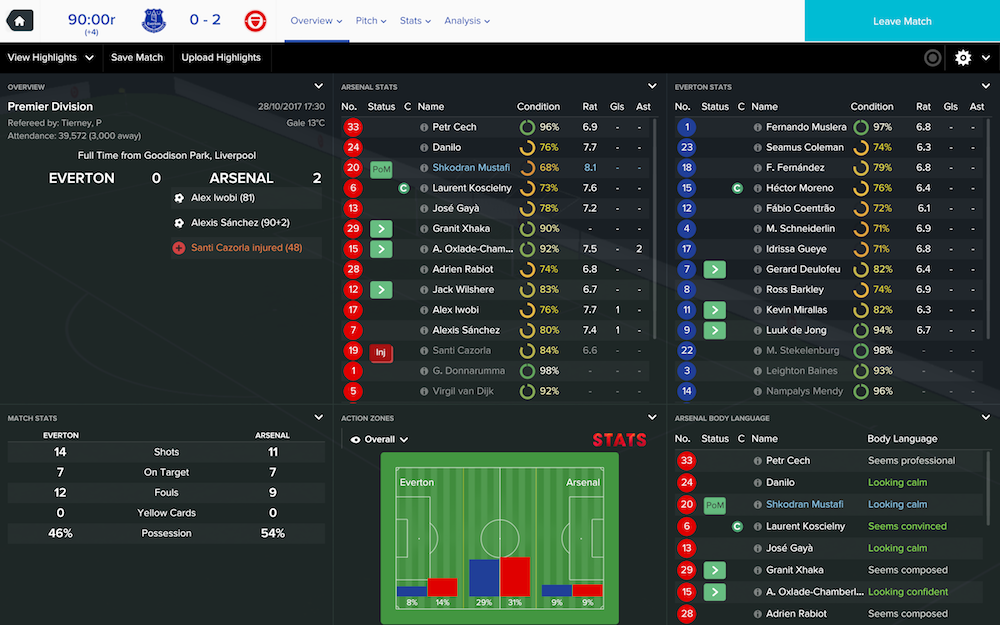 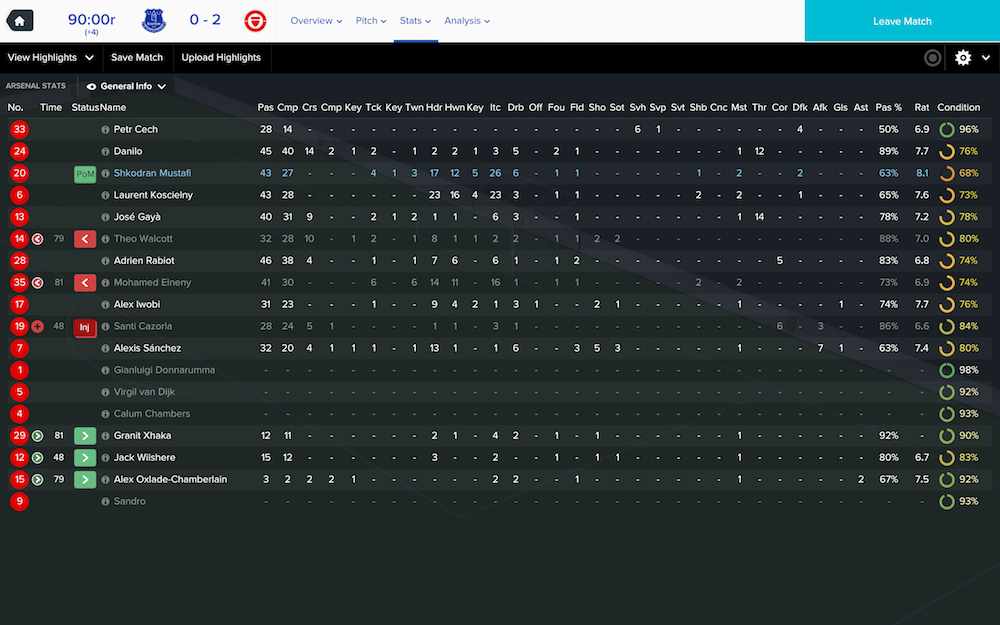 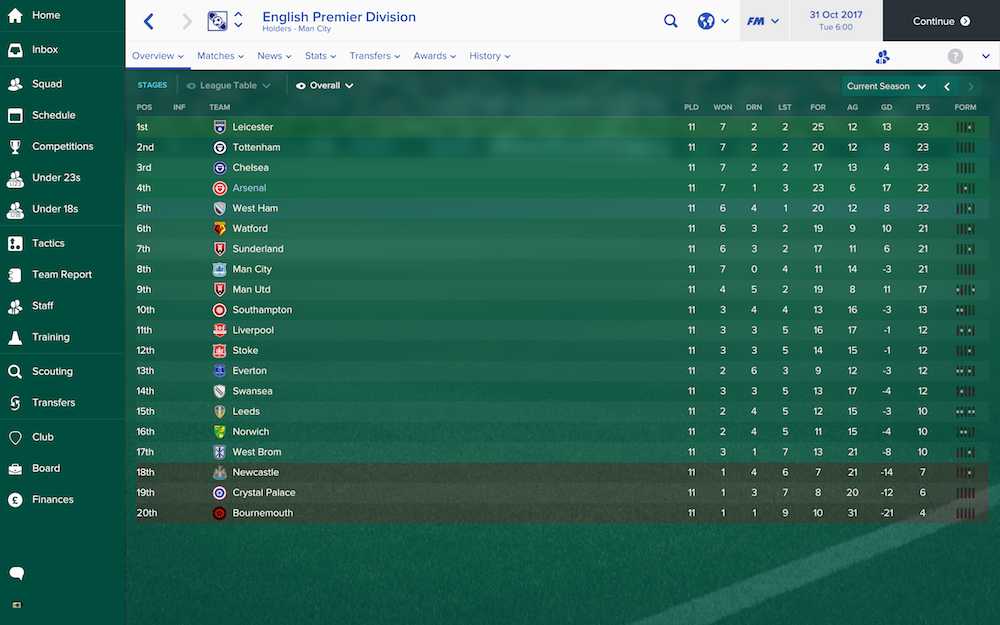 And that makes everything look much better. From three games without a win, we’ve gone to three wins on the bounce without conceding a single goal. Evidence, as if it was really required, that there’s a title winning team in here somewhere.

And perhaps I’ve been too hard on myself too. This is a very difficult division. Manchester City, flying last month, lost three games in October. Only two points separate the top eight and Manchester United and Liverpool aren’t among them. That’s the thing about this game; however bad it gets, there’s always proof somewhere that it can get a lot worse.