Thrown together with Internazionale, PSG and…erm…Rapid Vienna, I was a little concerned about this Champions League group. But if we win in Paris tonight, we’ll qualify for the second stage with two games to spare. That is, however, a very, very big if. We’re pretty strong though, the win over Everton didn’t weaken us too much at the weekend, so the only change is Jack Wilshere for the injured (again) Santi Cazorla. We may be in the market for a creative midfielder next summer. 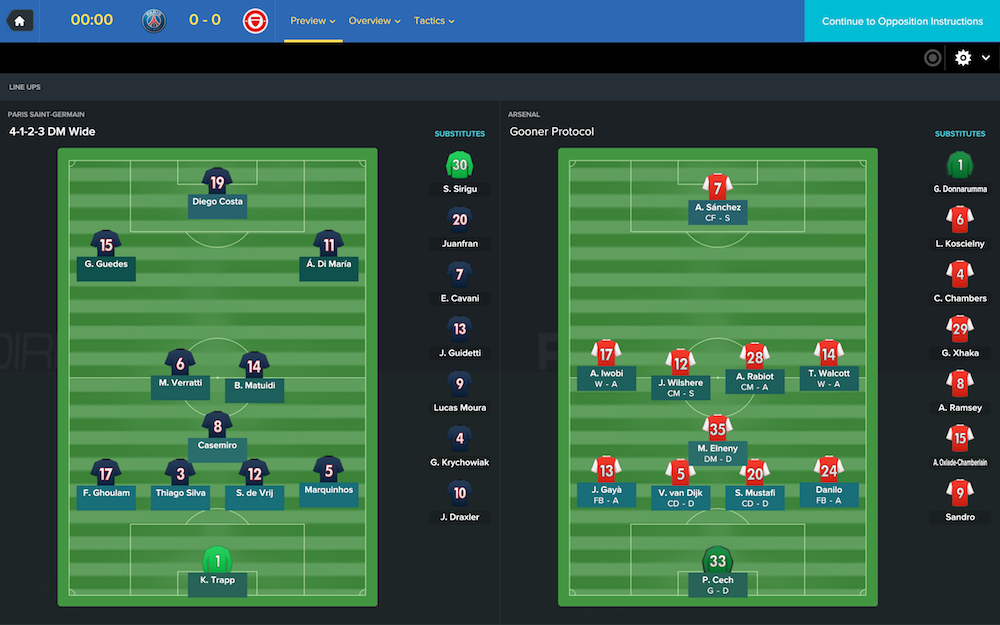 We got just a little bit lucky here. Given that my team is set up to sit back and fill gaps, we had more issues than I’d like with these sprightly, pass-and-move Parisians. They seemed happy to ping the ball around our third with impunity, stringing together 30+ passes in an effort to drag us out of position. It wasn’t really very sporting, mainly because it worked so well.

There were times when we looked unwieldy, most notably when Diego Costa found space inside Danilo and Shkodran Mustafi before firing in off the kneecap of Virgil van Dijk. But this Arsenal side has a little more backbone than the one I inherited and they don’t give up as easily. An opportunistic finish from Theo Walcott levelled the score before half time and after that very little happened. It was as if both teams were happy to settle for the draw. That’s unsurprising in our case. A win at home to the Viennese will put us through. But it leaves PSG on three points with only two games left. I can’t help thinking that they might have wanted to go for the win there. 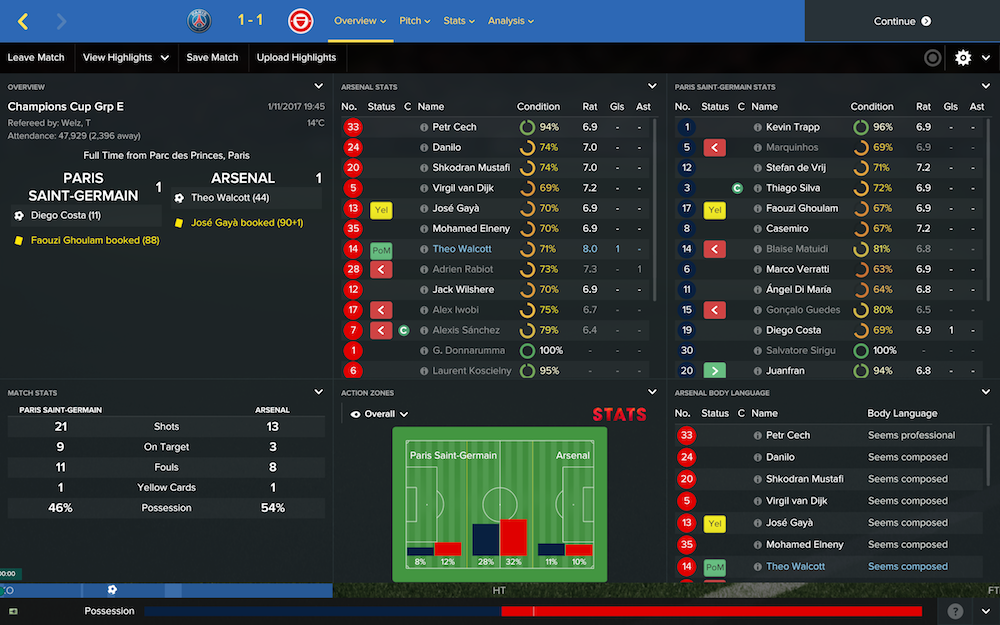 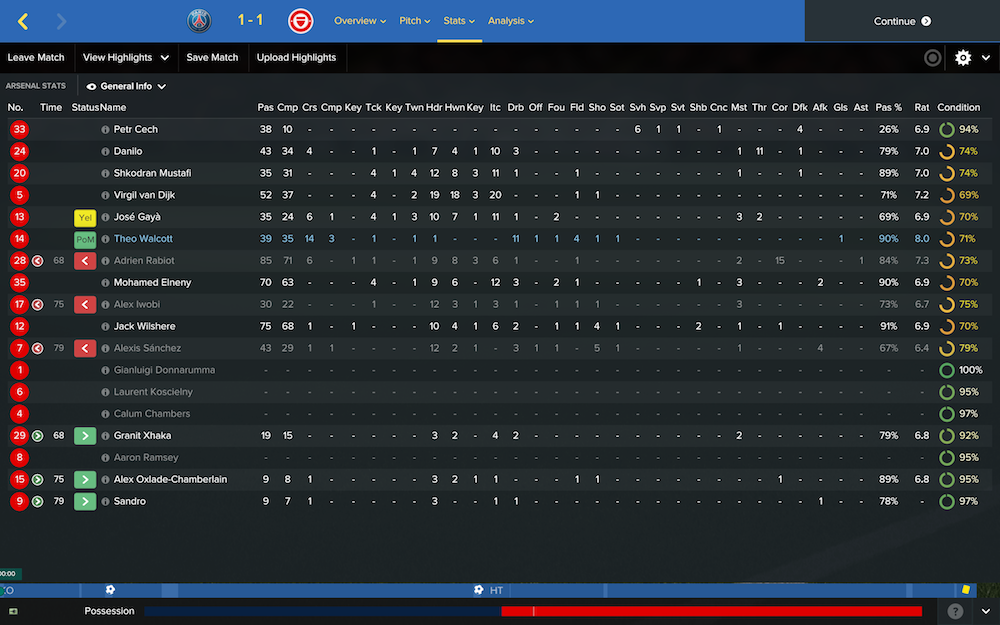 With the bare minimum achievement in that competition nearly secure, it’s time to get back to the bread and butter of the Premier League. Chelsea have been poor so far, finishing sixth last season and getting battered 5-0 by Spurs this season. They’re still in third place though and, well, it’s Chelsea. We have to beat Chelsea. Not least because Antonio Conte has caused considerable offence by marking out Petr Cech as our weak link. What absolute tummyrot. He’s a legend.

Jose Gaya’s yellow card, earning him a Champions League ban, has caused his morale to plummet, so Kieran Gibbs will get a game here. Calum Chambers will come in for the tiring Danilo on the other flank. I’ll also swap out Jack Wilshere and give Granit Xhaka a go in the centre of midfield, just to see how he does while Aaron Ramsey gets back to full fitness. But it’s international week after this, so I’ll resist the temptation to make any more changes. 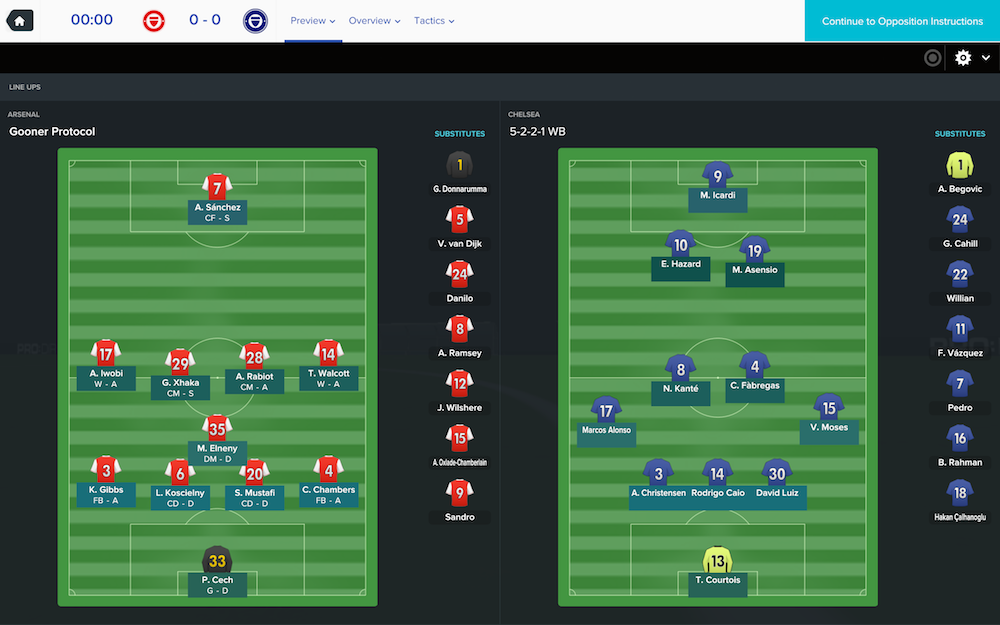 After all the pre-match jibes, we cancel each other out to the extent that there is not a single first half highlight. Even on extended mode. I gently remind the players of their responsibilities and we look a little sharper in the second half, more so when Ramsey and Wilshere arrive to freshen up the midfield quagmire. But it still looks as if we’re destined for a draw. And I’m all right with that.

But then a late, cheeky lobbed free-kick from Sanchez finds substitute Oxlade-Chamberlain on the right. He beats Willian with a crafty header and cuts into the box. There are three Arsenal players waiting for the pass. Will he cross it low? Will he cross it high? He does neither and just tucks it inside Thibaut Courtois’s near post. It’s the most impetuous goal I’ve seen in ages. Unfortunately, he somehow manages to injure himself in doing so, or perhaps in celebrating, and so I’m down to ten men for the last ten minutes.

That’s okay. The Castle Protocol was built for such moments. I take Xhaka out of defensive midfield and put him on the right in a defensive role. We’re 4-4-1 and we’re comfortable right up until Hakan Calhanoglu inexplicably finds himself one-on-one with Petr Cech in the last minute. But Cech saves. Because Cech is timelessly awesome. And fuck you, Antonio. 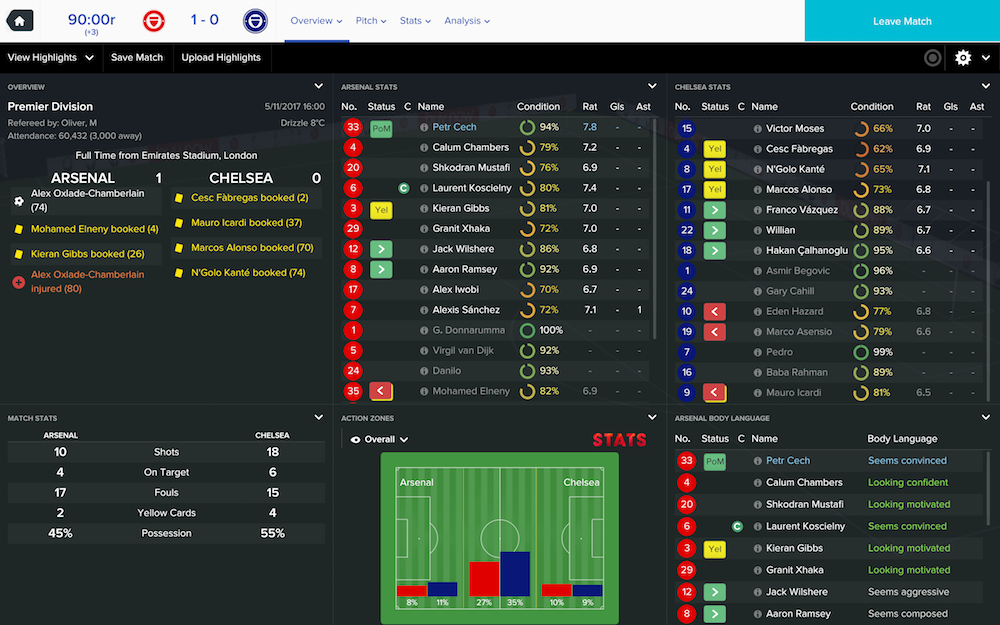 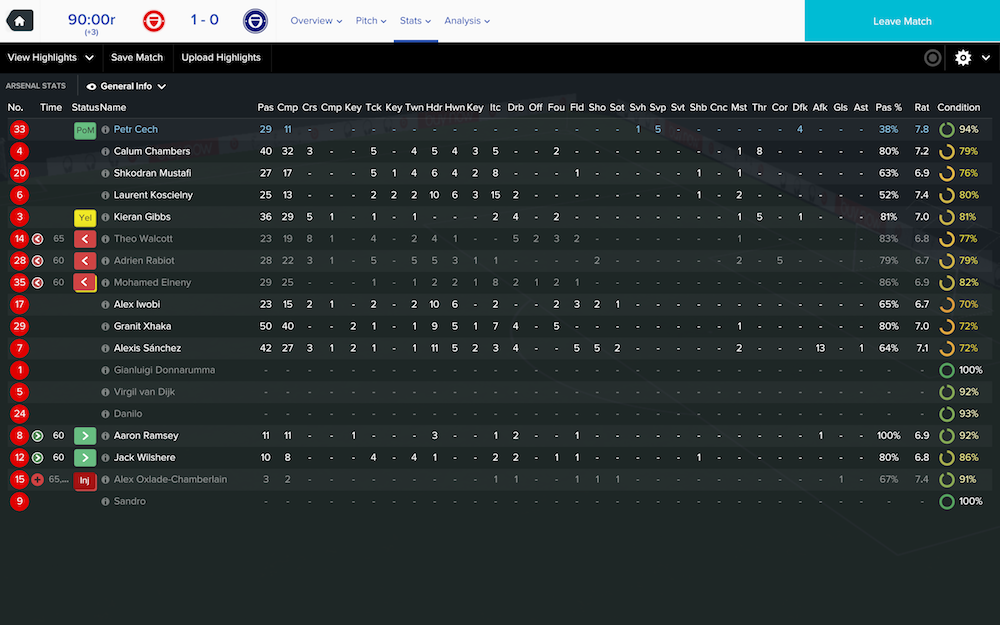 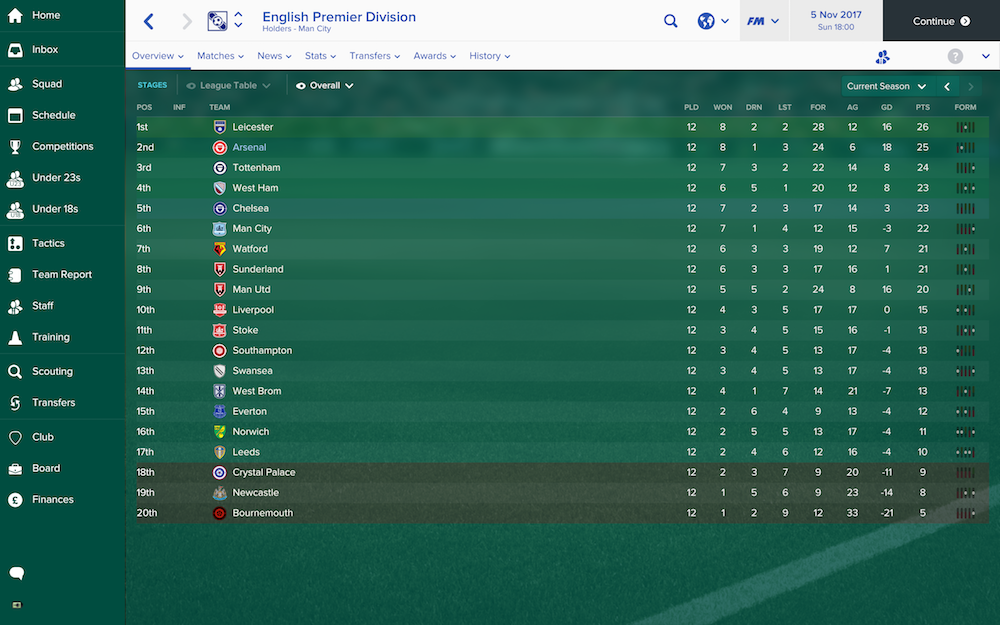 Let it never be said that I haven’t nailed the defensive aspect of this game. Since that 1-2 defeat to Manchester City at the start of September, we’ve conceded only three goals in 13 games across all competitions. In the league overall, we’ve shipped just six in 12 games. And with 24 goals in the league, we’re joint second highest scorers. If we could just make sure to redistribute those conceded goals to the games where we score lots, we’d be okay. I’m surprised no-one’s ever written a coaching manual with that advice.

We have 13 days off, so it’s a chance to review. I’m happy with set-pieces. Our defensive counter-corner is a real threat and our ‘play it short then twat it to the back of the box for Sanchez’ routine has made us joint top scorers from corners. Rotation-wise, we’re spreading the games about and everyone seems quite happy. Training is good, everyone’s content and improving. If it wasn’t for the fact that we’re in line for an FFP fine for our wage bill, I’d be delighted. And I don’t understand that at all. We’ve actually cut the wage bill significantly and, at £107m per annum, we’re paying considerably less than our rivals. I shall do what I do with all bills that seem entirely illogical and completely ignore it. 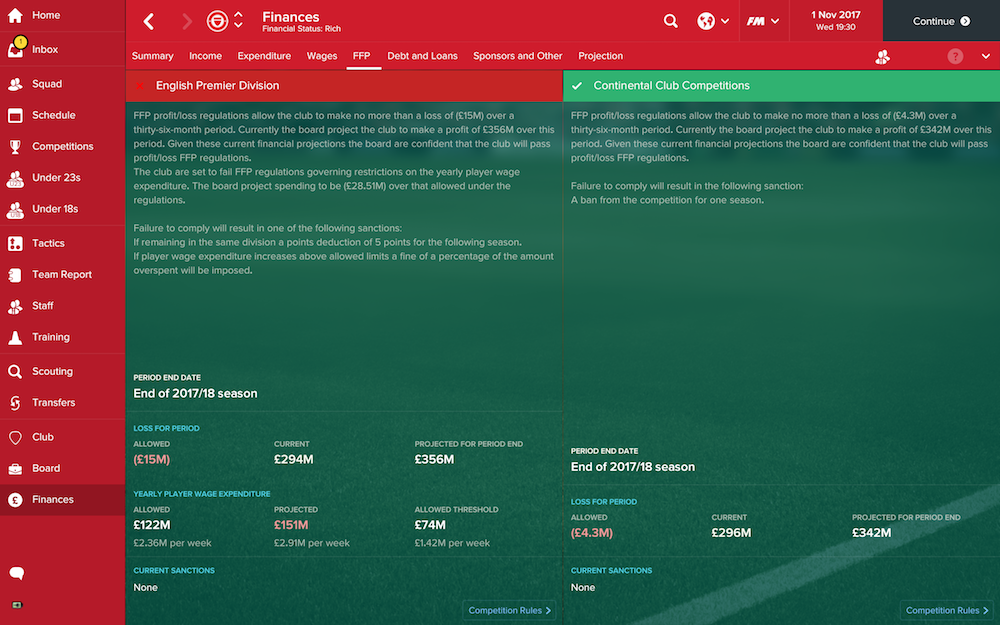 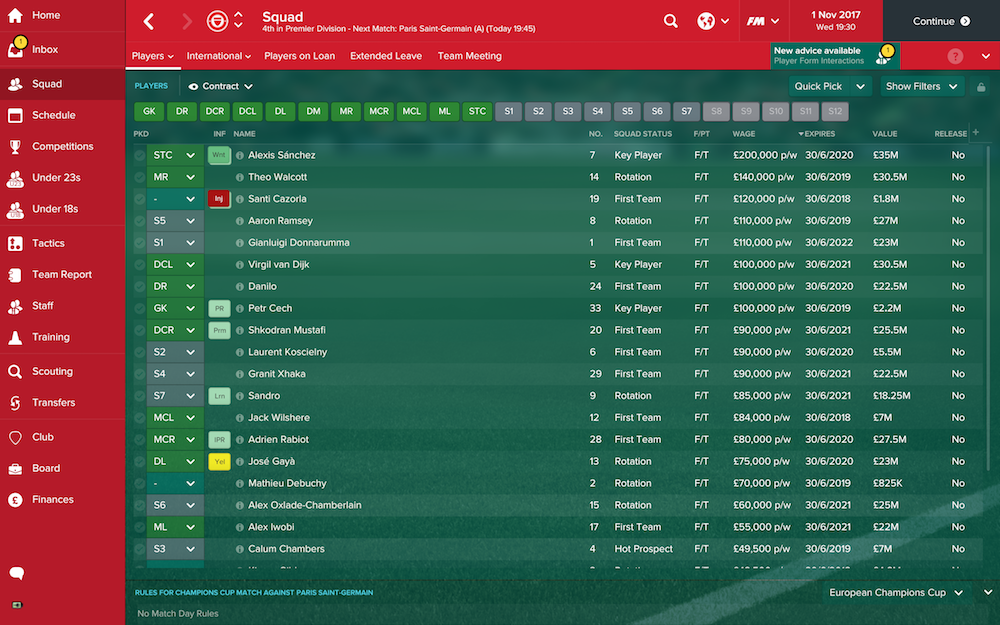 When the league resumes, we have a few tired legs again, but that’s no problem with a squad like this. Demarai Gray comes in for Theo Walcott and Jack Wilshere is in for Adrien Rabiot. I have Rapid Vienna on Tuesday, but I think I’ll put the focus on the league and let the fringe players deal with Europe. What could possibly go wrong? 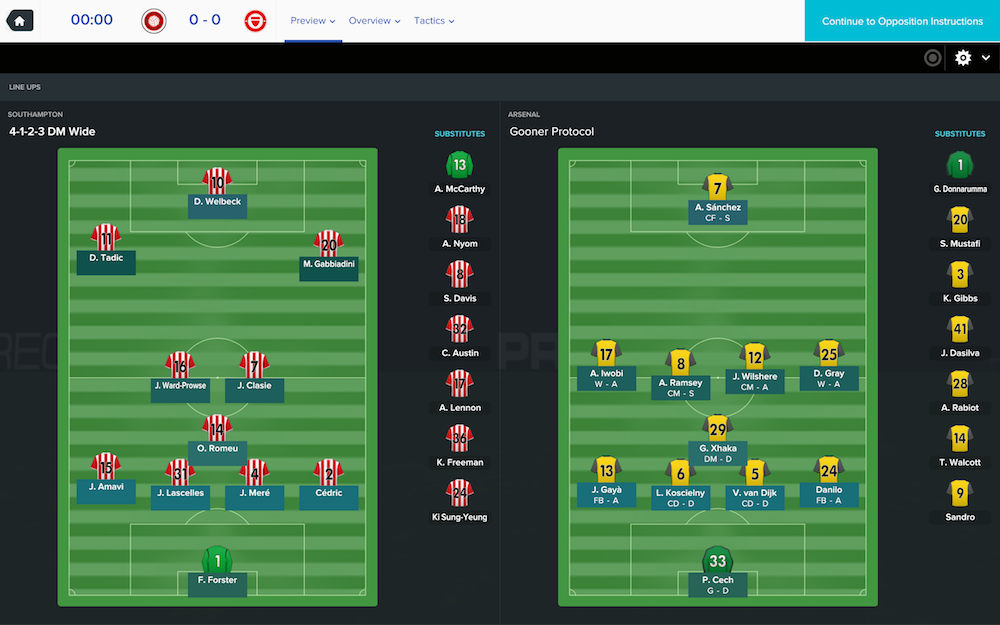 Remember all those times Danny Welbeck spaffed shots over the bar for me? Well he doesn’t do that for Southampton. Of course he bloody doesn’t. We were leading 1-0 through Sanchez, everything was looking peachy and then James Ward-Prowse played a big one over the top, the defence went to sleep and Welbeck smashed the ball into the top corner as if it’s the sort of thing he does all the time. After that, the game went very quiet, as if no-one could quite believe what had happened.

With half an hour left, I made a bold move and switched to the Klopp Protocol. Southampton immediately made and missed two great chances. But I kept at it. I left them attacking and then, with 14 minutes to go, Jack Wilshere fired in a *low* ball from out on the left, Saints failed to clear it and Iwobi tucked it away. I resolved to switch to Castle Protocol and see the game out. But I wasn’t quite quick enough. And the next highlight was Southampton kicking off, which never bodes well.

Surely, we couldn’t let them score straight from the restart? Surely we couldn’t be so bovine as to stand there gormlessly watching them play the ball around our box? Surely Petr Cech couldn’t be beaten at his near post by Jordan fucking Amavi? No, all of these things happened. Because we’re fucking Arsenal. 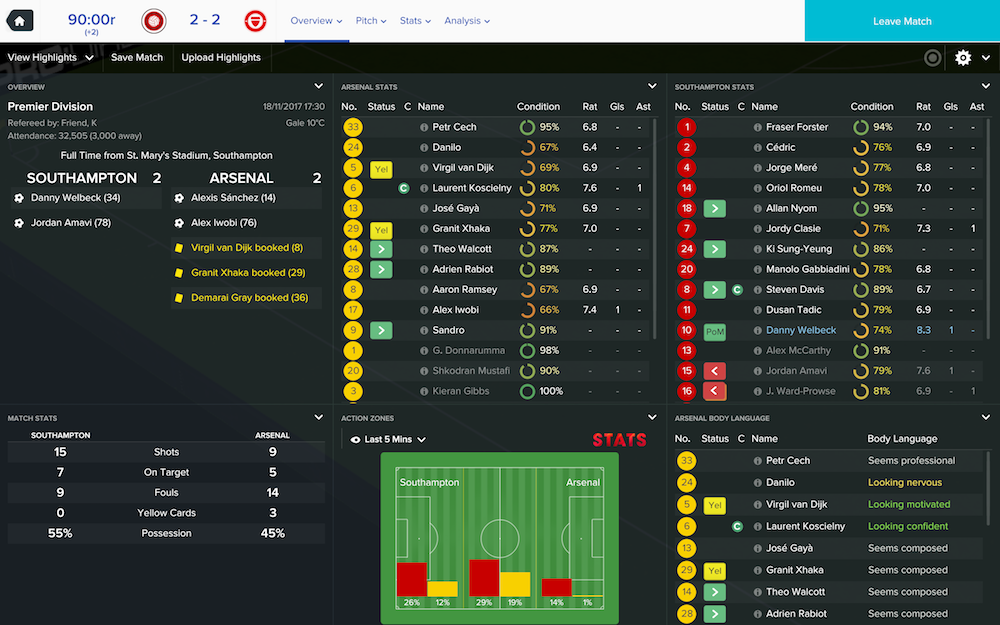 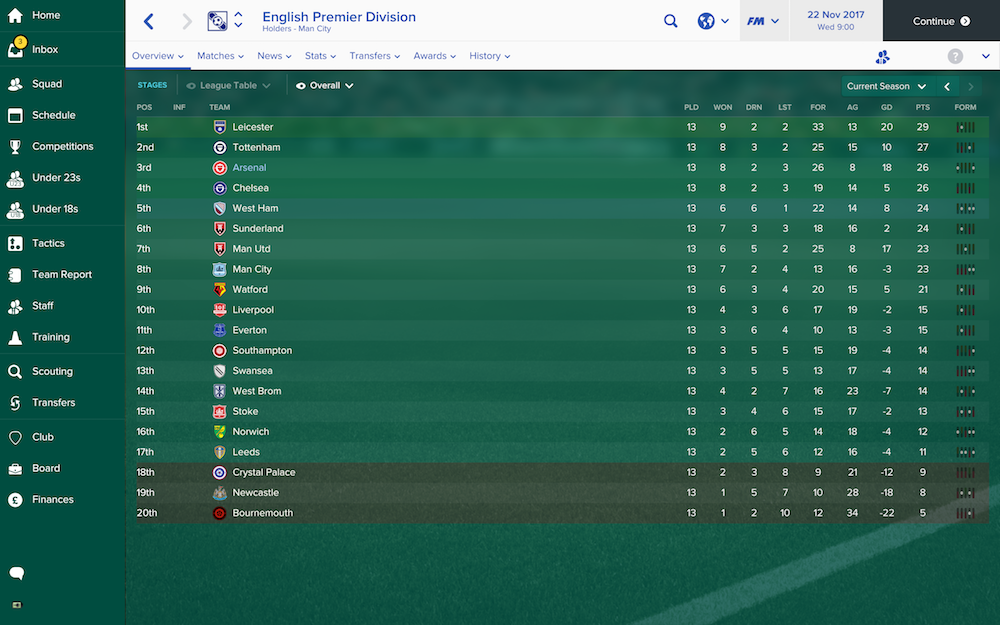 Ring the changes. I am unamused. There is now an opportunity for my fringe players to prove themselves worthy of the first team. I will be watching their performance against Rapid Vienna very closely. And please don’t lose this, lads, because I don’t think I could take that kind of rejection. 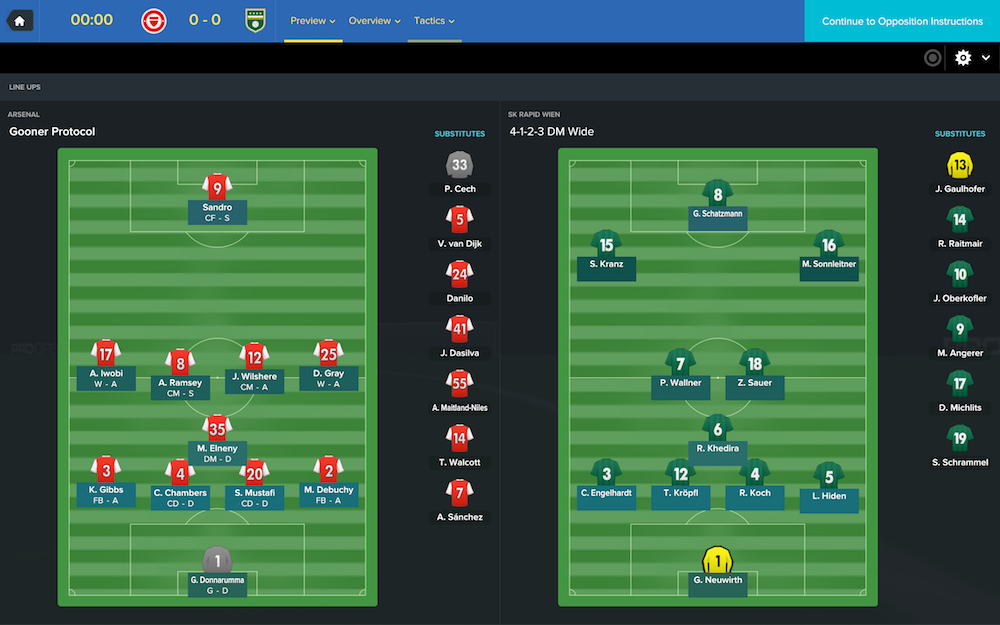 Well, thank God for that. You would not have wanted to be in our dressing room at half time. Forty-five minutes and we barely made a chance. You’d think they were happy sitting on the sidelines picking up an enormous wage for barely getting off the ben…hang on a minute.

Anyway, after an attitude readjustment and a switch to the Klopp Protocol, things started to look up. Sandro smashed in one after a defensive mix-up and another after, brace yourself, a low cross from Theo Walcott. They’re getting it. It’s taken four months, but they’re getting it. 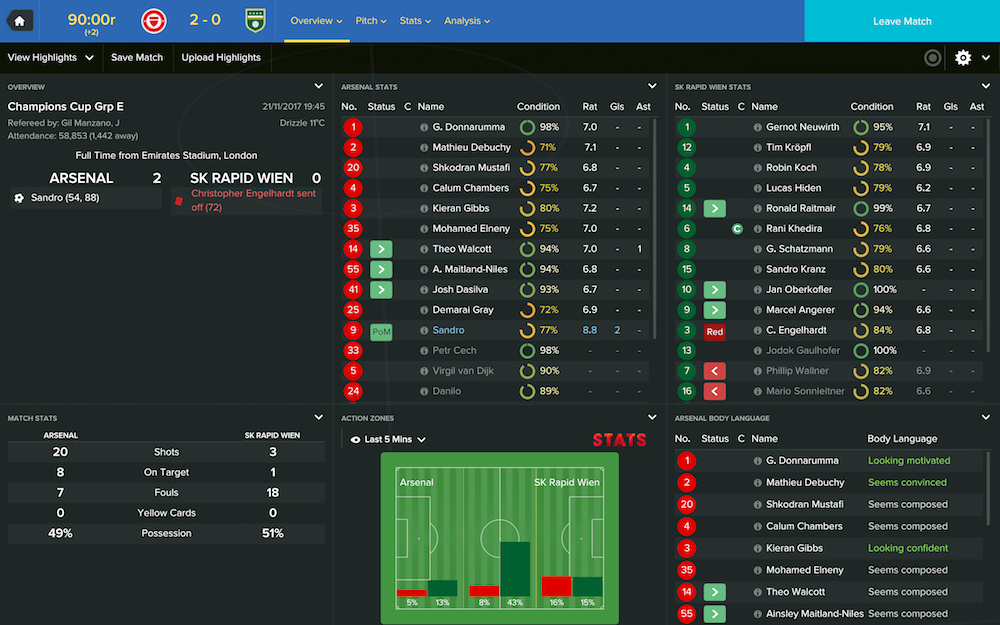 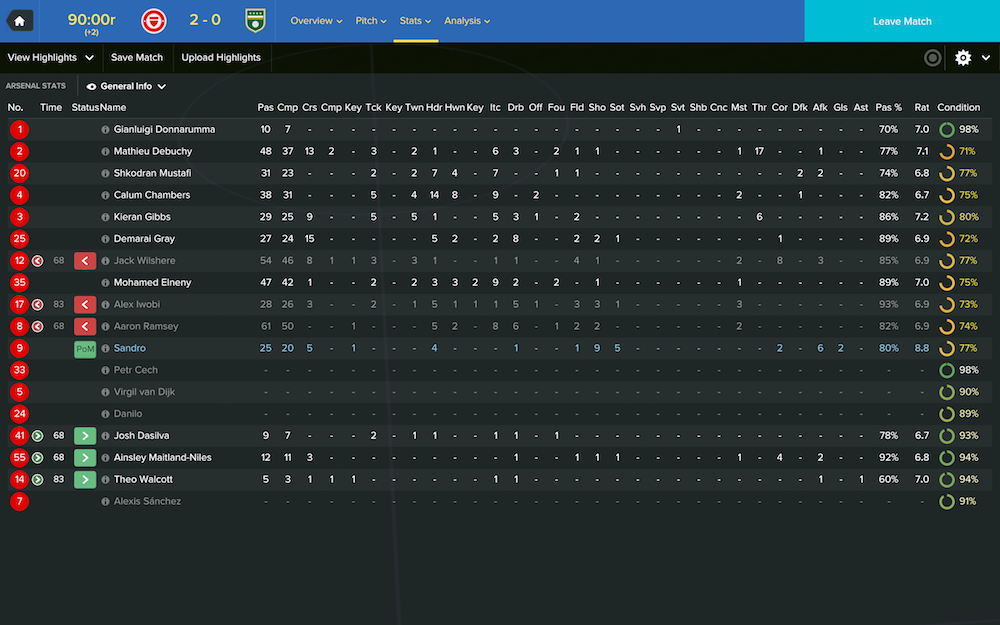 Now for West Ham, I’m going to make a little change. Gianluigi Donnarumma did well against Vienna, he’s done well whenever he’s played, and he’ll be playing in a few days in the League Cup against Everton…so I’m going to let him play here as well.

Cech is still my number one, but it’s nice for the boy to have a little run of games as he acclimatises. He is, after all, our future. Elsewhere, we’re back at whatever passes for full strength in the Emirates Stadium; our misbegotten bastion of perpetual disappointment. 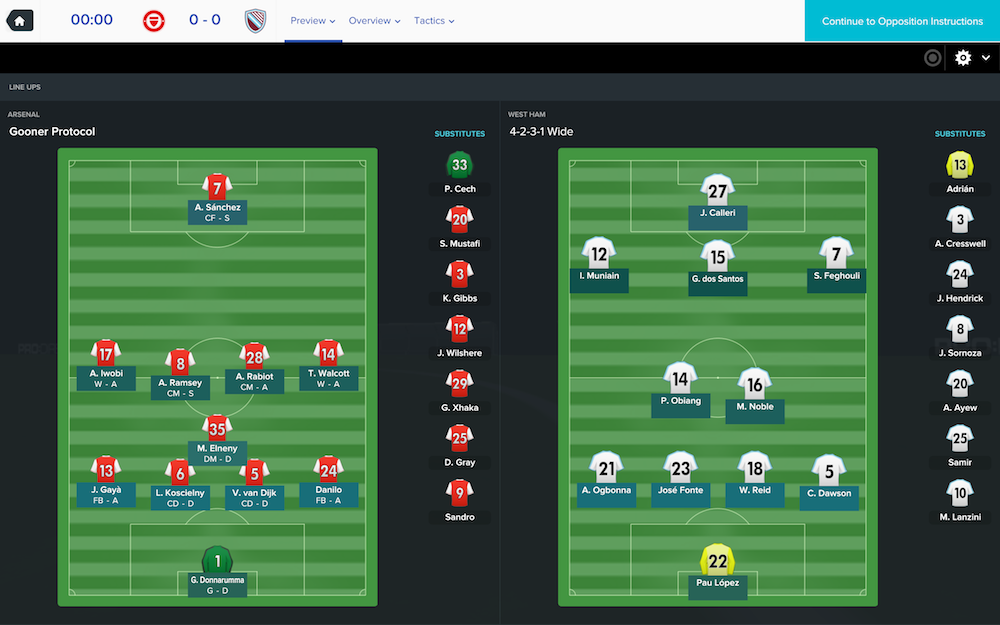 I really am very pleased when Alexis Sanchez opens the scoring after just three minutes. My favourite games are not the classic tussles, or the incredible fight-backs. They’re the routine victories where you get in front quickly and never look back, subbing off your three best players on the hour just because you can. This is not one of those games.

Six minutes later, a flowing West Ham passing move ends with Giovani dos Santos blasting one past Donnarumma’s ears from close range. It’s not until the second half that we win the streakiest of penalties and Sanchez doubles the lead. I genuinely have no idea what it was for, but West Ham seemed very upset.

They were even more upset later when we were given another one, this time for a blatant push in the box. Sanchez scored that as well to wrap up his hat-trick. It wasn’t over though. It never is with Arsenal. A wild Mark Noble strike took a wicked deflection to further stain Donnarumma’s sheets, but a win is a win is a win. And now, finally, we’re top of the table. 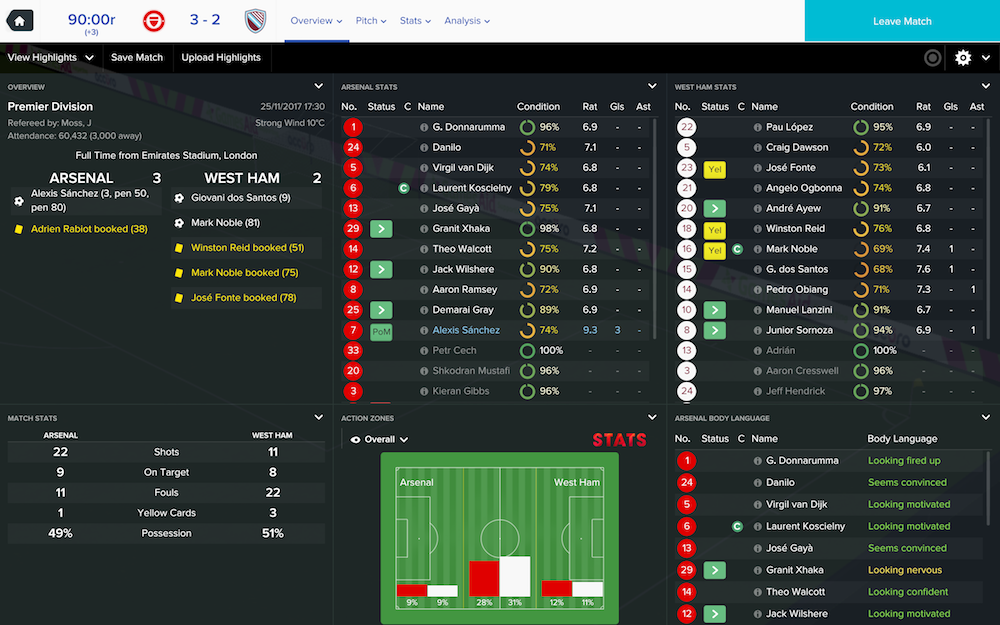 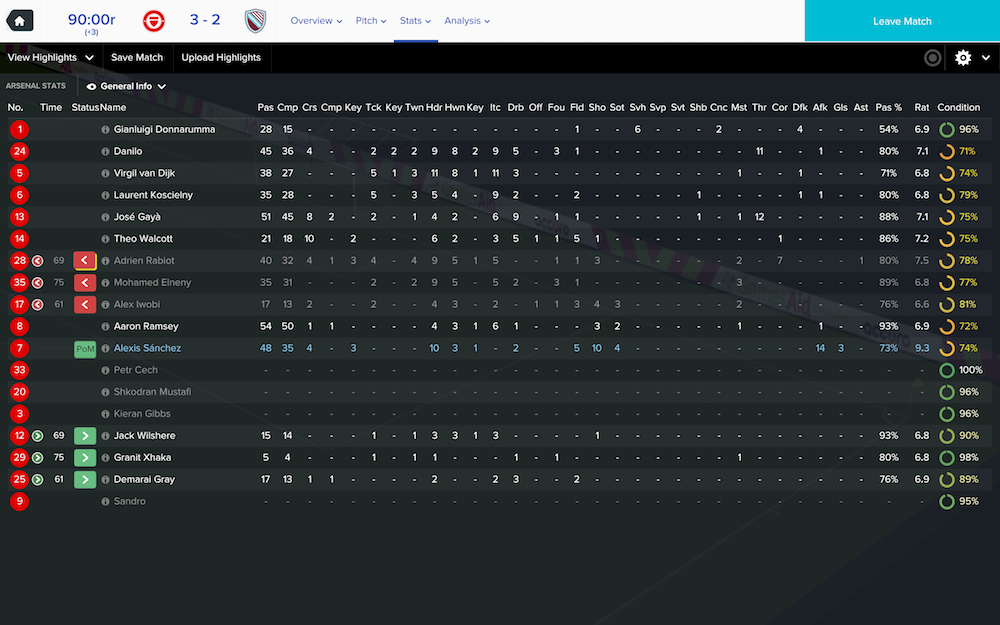 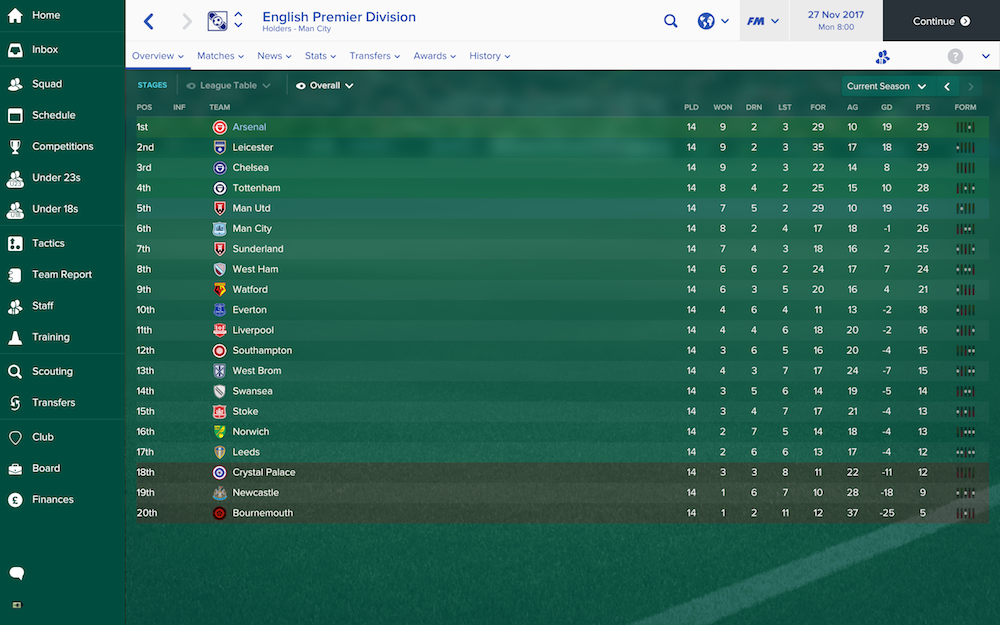 Now, I know what you’re thinking. It’s the quarter-finals of the League Cup and it’s a trophy and trophies are nice and my policy of playing the fringe players in the domestic cups is going to be tested. Well, ye of little faith. Laurent Koscielny will captain the side and Theo Walcott will play, but that’s only because of injuries. Elsewhere, it’s a Sandro-topped, Maitland-Niles infused second string because the development of these boys, as men as well as players, is the most important issue at hand.

Or at least it is until Everton withdraw their best players midway through the second half and replace them with children. Up until this point, it’s been dire. We’ve struggled to find gaps and we’ve failed to create a clear cut chance. But now Romelu Lukaku has left the field and Fabio Coentrao and Ross Barkley have gone with him. Everton haven’t put a shot on target and they’re throttling back. I mean, it would be negligent of me not to take advantage, wouldn’t it? I’d be actually hurting the players I’m trying to help. There’s nothing to be gained in deliberately losing, is there? On comes Sanchez, flanked by Rabiot and Danilo.

Don’t look at me like that, I’m only human. 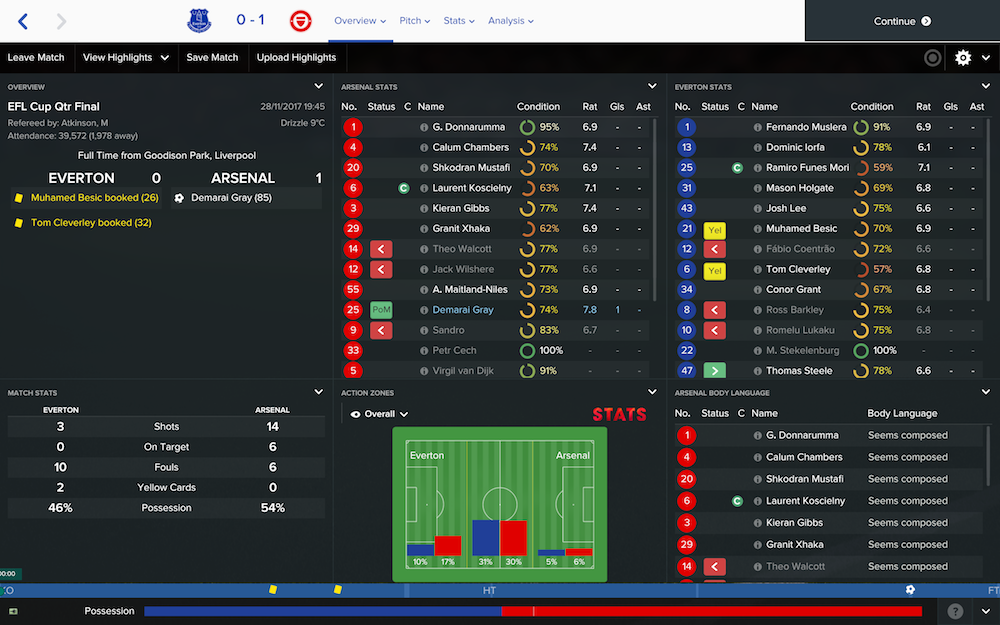 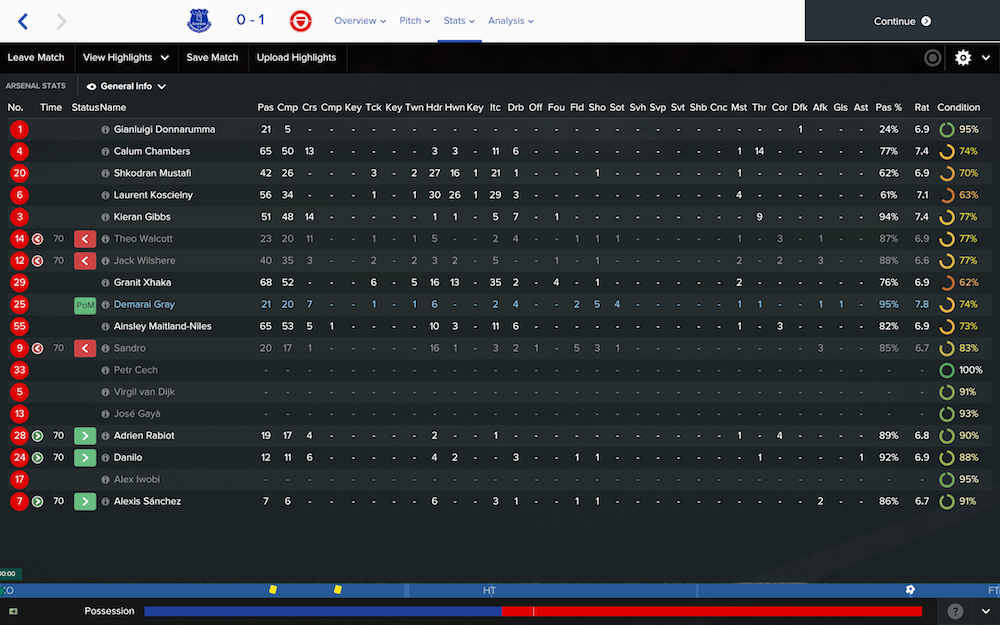