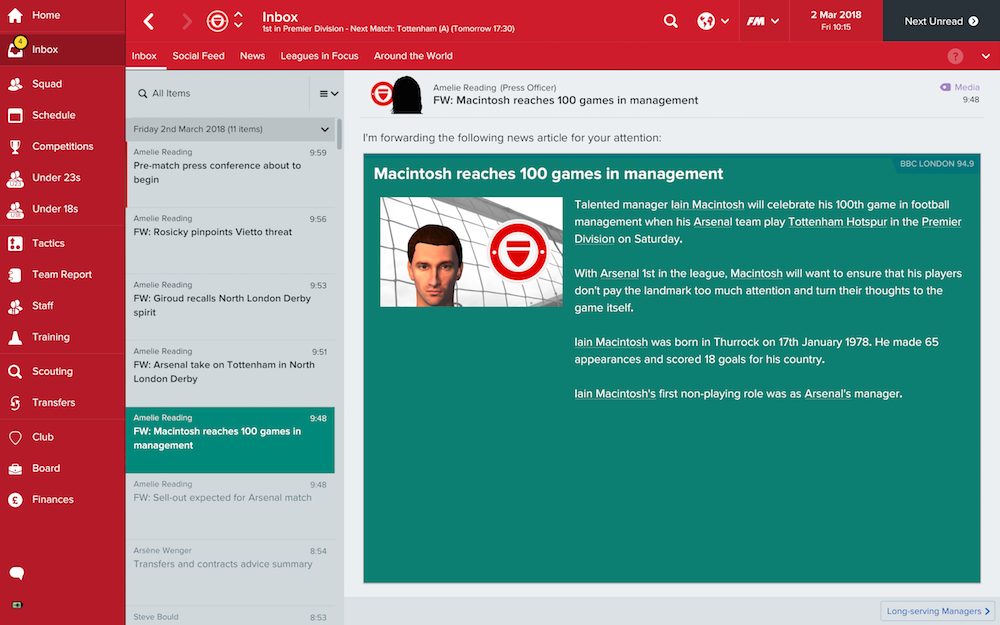 After the crushing disappointment of losing a cup final to a Manchester City reserve side that got lucky, I’m not interested in landmarks. I want to lay down and die. But sadly, that will have to wait. We have title rivals Tottenham to play and we’re away from home and this feels like the first stages of a hideous slump that will see us slide right out of the top four, but maybe I’ve just been here too long and I’m infected by the despair.

I attach no blame to Gianluigi Donnarumma, but Petr Cech will come back in for the run-in. Calum Chambers can replace Danilo for a bit and Santi Cazorla can have one last run in the team in the middle. We are still short of a number of players, not least the indomitable Virgil van Dijk, but we have strength in this team. We have a steely core now. I’m sure we’ll recover. Absolutely sure. No doubt at all. If you need me, I’ll be on the loo. 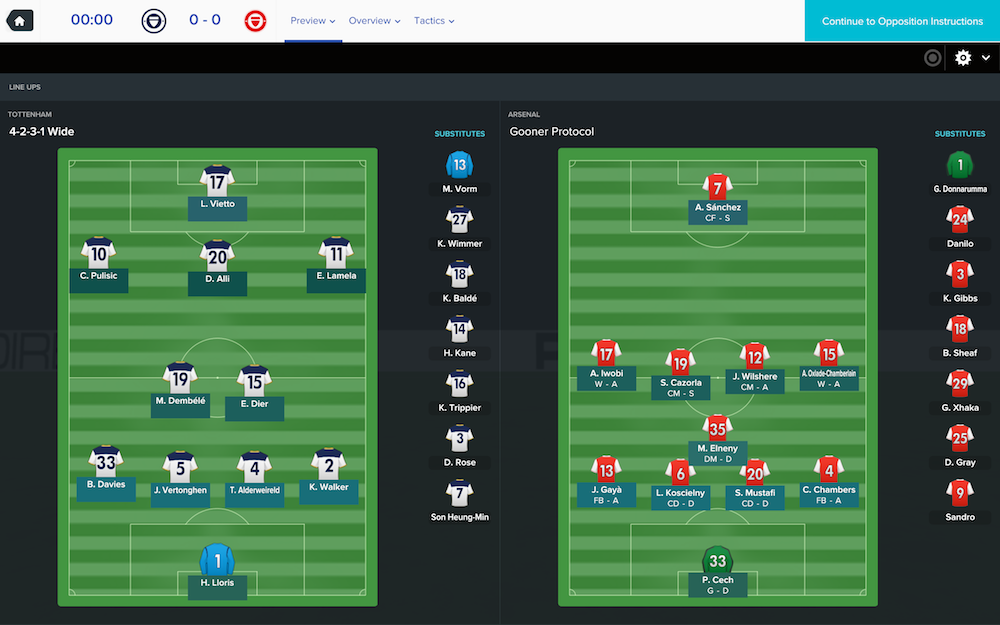 I feel physically sick. Two games ago, we were coasting along picking up points for fun. Now we’re in freefall. Injuries haven’t helped. I don’t think this would have happened had Van Dijk or Walcott or Rabiot had been fit. But there’s nothing I can do about that.

It was horribly one-sided. We had no shortage of possession and we found it easy to get up the field around Spurs’ penalty area. What we couldn’t do was keep the ball. Time and time again, we gave it away through rank stupidity. Stunningly, Santi Cazorla was one of the worst culprits, repeatedly pinging deft passes to Eric Dier.

One of the great things about this formation is that the clash of counter-attacking team instructions and attacking personal instructions means that you stay deep and tight out of possession and clatter up the pitch in possession. But if you give the ball away needlessly outside the box, it doesn’t half leave you exposed.

Luciano Vietto scores the first of his three goals with a ludicrous backheeled flick that goes in off Mohamed Elneny’s knee and he adds another before half time. For whatever it’s worth, I bollock the players. Sanchez gets one back and gives us hope, but Vietto claims his hat-trick before full time and the Son Heung Min scores a desperately soft one to make it four. I don’t even smile at Jack Wilshere’s goal. We’re in a lot of trouble. 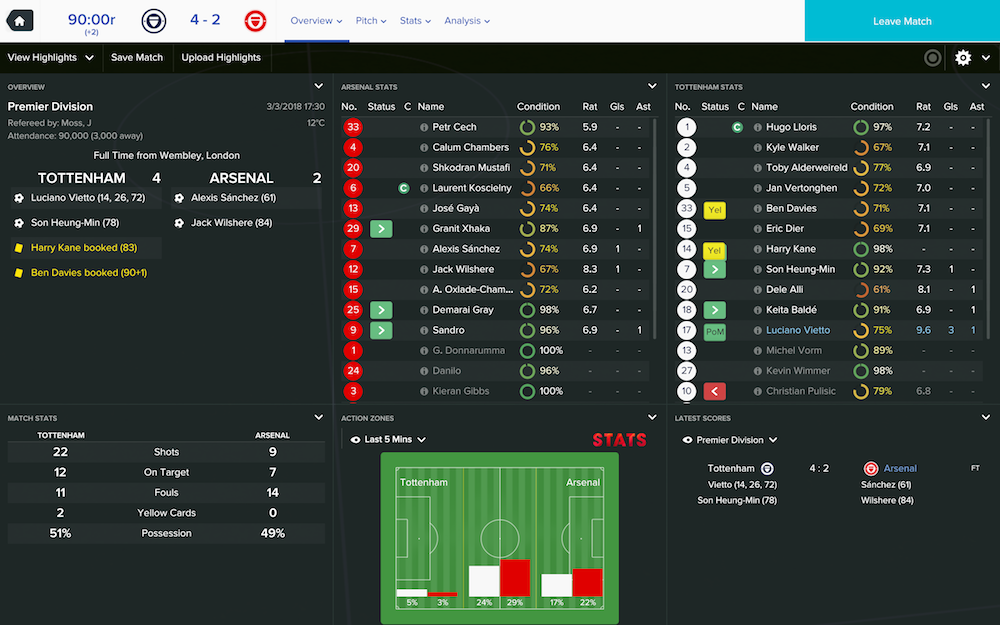 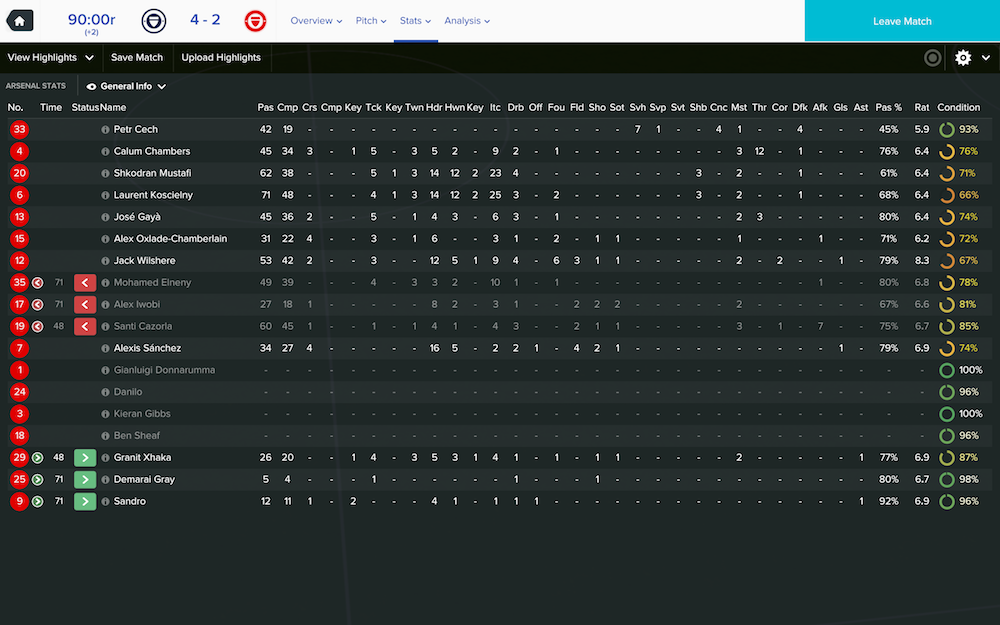 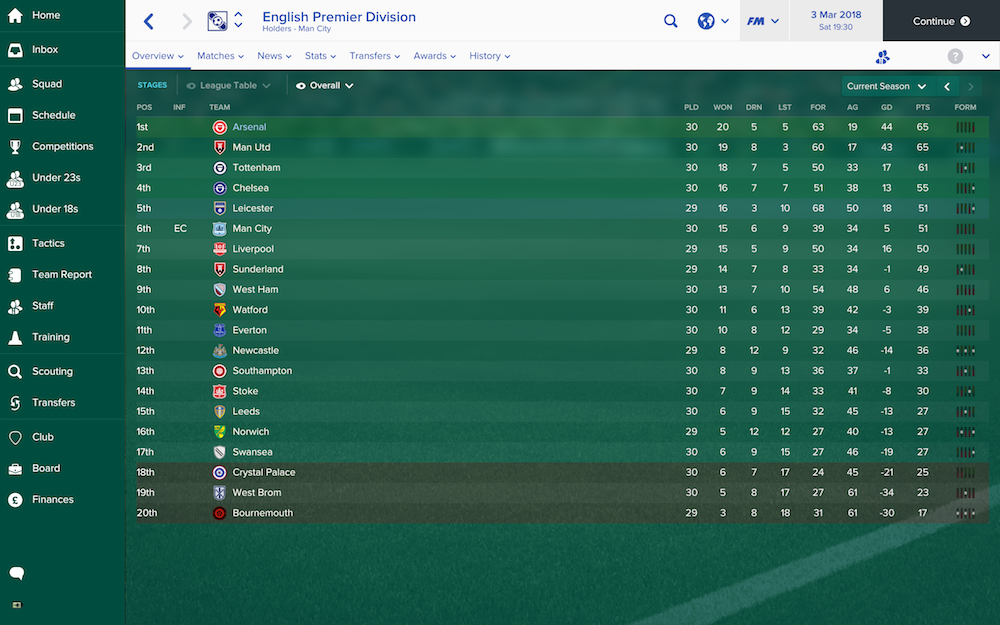 It’s not going to get any easier now. We’ve got Atletico Madrid in the Champions League and then Chelsea. I feel wretched. Granit Xhaka will move up into central midfield to replace Cazorla and Danilo will come back in for Chambers. I’ll give Cech another chance in goal after that desperate display because he’s Cech and you treat legends well. But my patience is beginning to expire.

We lost the first leg in Madrid 1-3, but if we can turn this around, perhaps it will reinvigorate the squad. And we’re going with the Klopp Protocol to put them under immediate pressure. Two goals is all we need. Well, two goals and a clean sheet. I’m going to be sick again. 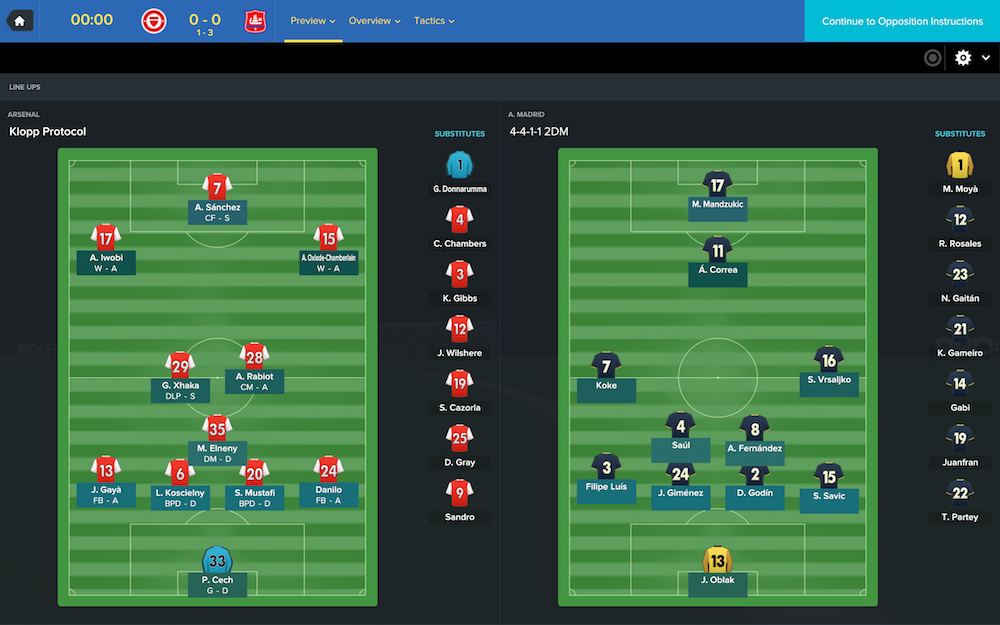 Oh God, we needed that. Atletico, quite understandably, sat back and defended deep, so we smashed ourselves against their walls with no fear of reprisals. And it was Danilo who changed the game after 20 minutes, oddly enough. He burst forward and tried to take three men on at once…with predictable results. He lost the ball and Atletico looked to break. Unfortunately for them, they ran straight into Alex Oxlade-Chamberlain who won back possession and played a through-ball for Danilo, still miles up the field and out of position. One on one with the goalkeeper, he took a breath and smashed it into the bottom corner. Just before half-time, Atletico half cleared a corner but only as far as Xhaka. He rifled a low long range effort into the back of the net. Suddenly we were going through on away goals.

Should we push on for a third or lock it down? Lock it down, of course, silly. Castle Protocol reduced the second half to a light smattering of nothing highlights and we ran the clock down with a degree of comfort that flies in the face of everything we know of this football club. We’re through. Somehow. 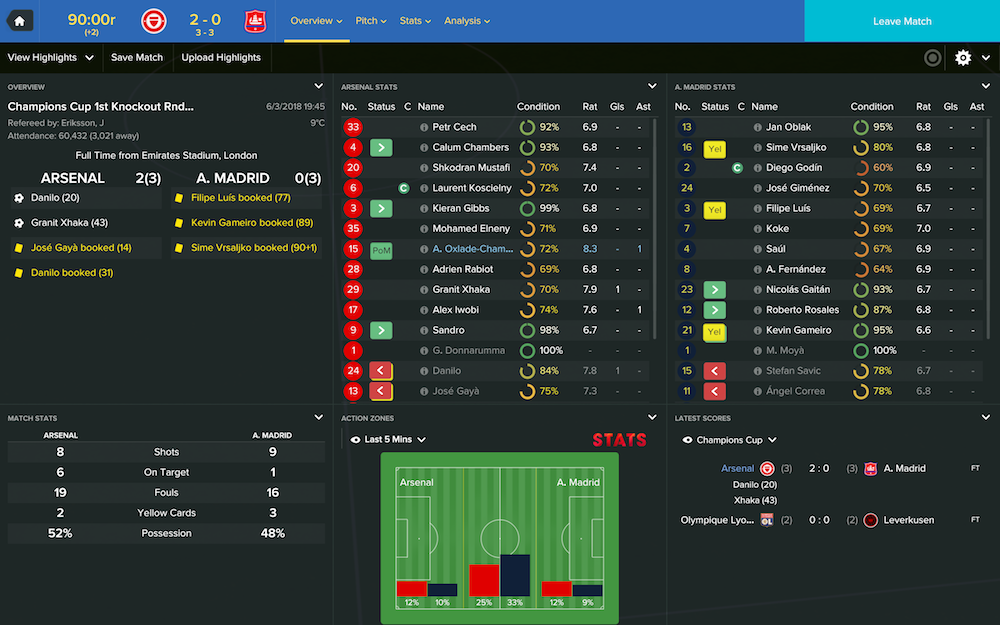 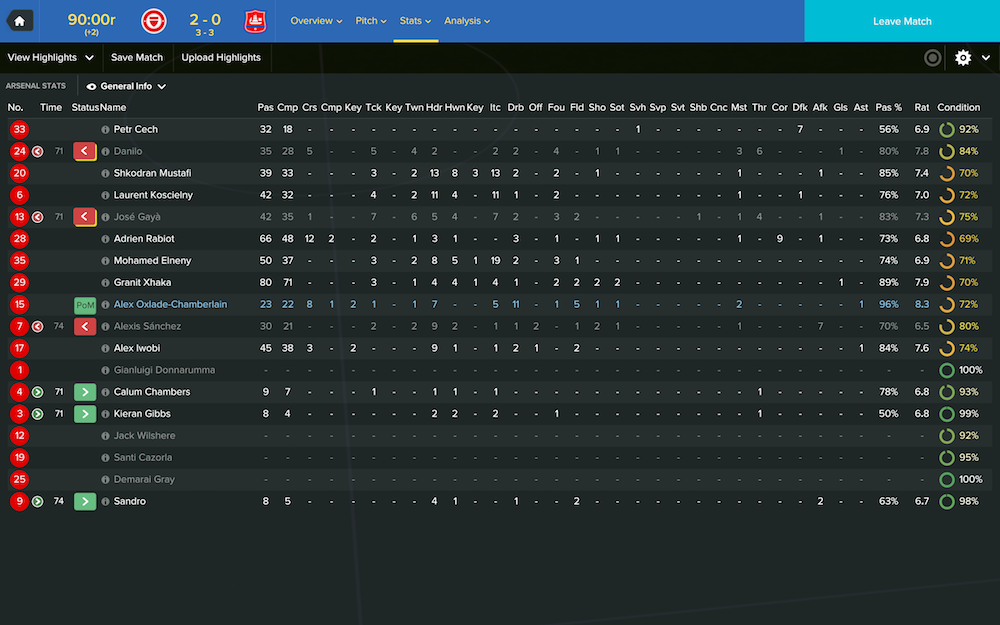 And there’s no let up because now we have to go away to Chelsea. I’m sticking with exactly the same team, largely because most of the squad are injured. A bad result here would be very damaging, so I want them to rush at Chelsea the same way they rushed at Atletico. Ideally, we’ll take the lead and then shut it down. Alternatively, we’ll give away a stupid goal and hand the title to Manchester United. I really do hate this game. 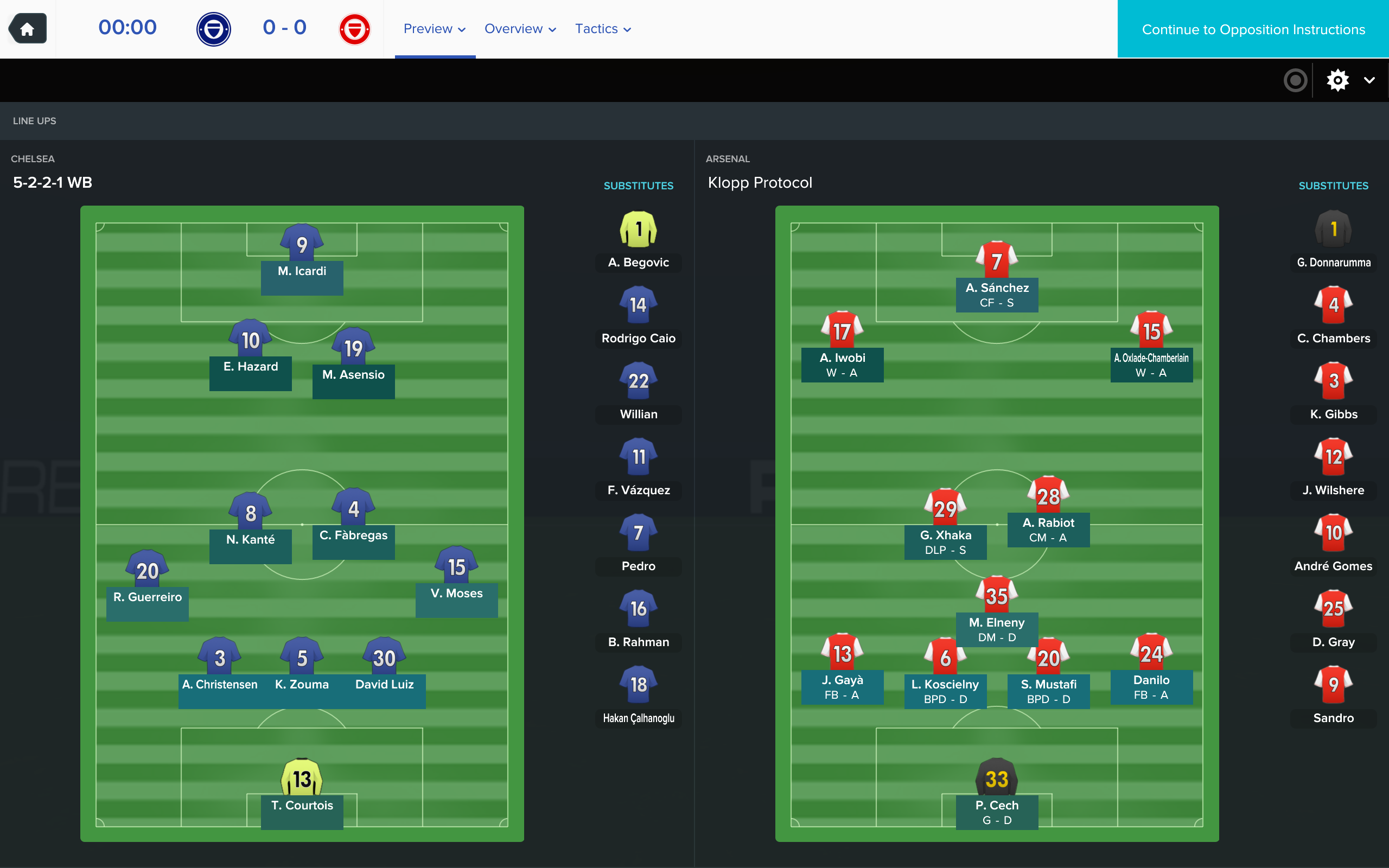 Nope, that didn’t work either. After 75 fruitless minutes, I figured it would be better to get out with a draw than nothing at all. I replaced the two tiring midfielders and switched to the ultra defensive Castle Protocol. I did consider saving Alexis Sanchez’s legs too, but opted to leave him on because, hey, you never know.

Indeed. With seconds left on the clock, Sanchez picked up the ball on the half way line, accelerated, beat four players and nudged the ball past Thibaut Courtois. I couldn’t tell you what happened after that because I fell off my chair.

We’re three points clear at the top again, but only for a few days until Manchester United beat Sunderland on the Wednesday. Still, better to be joint top than alone in second, eh? 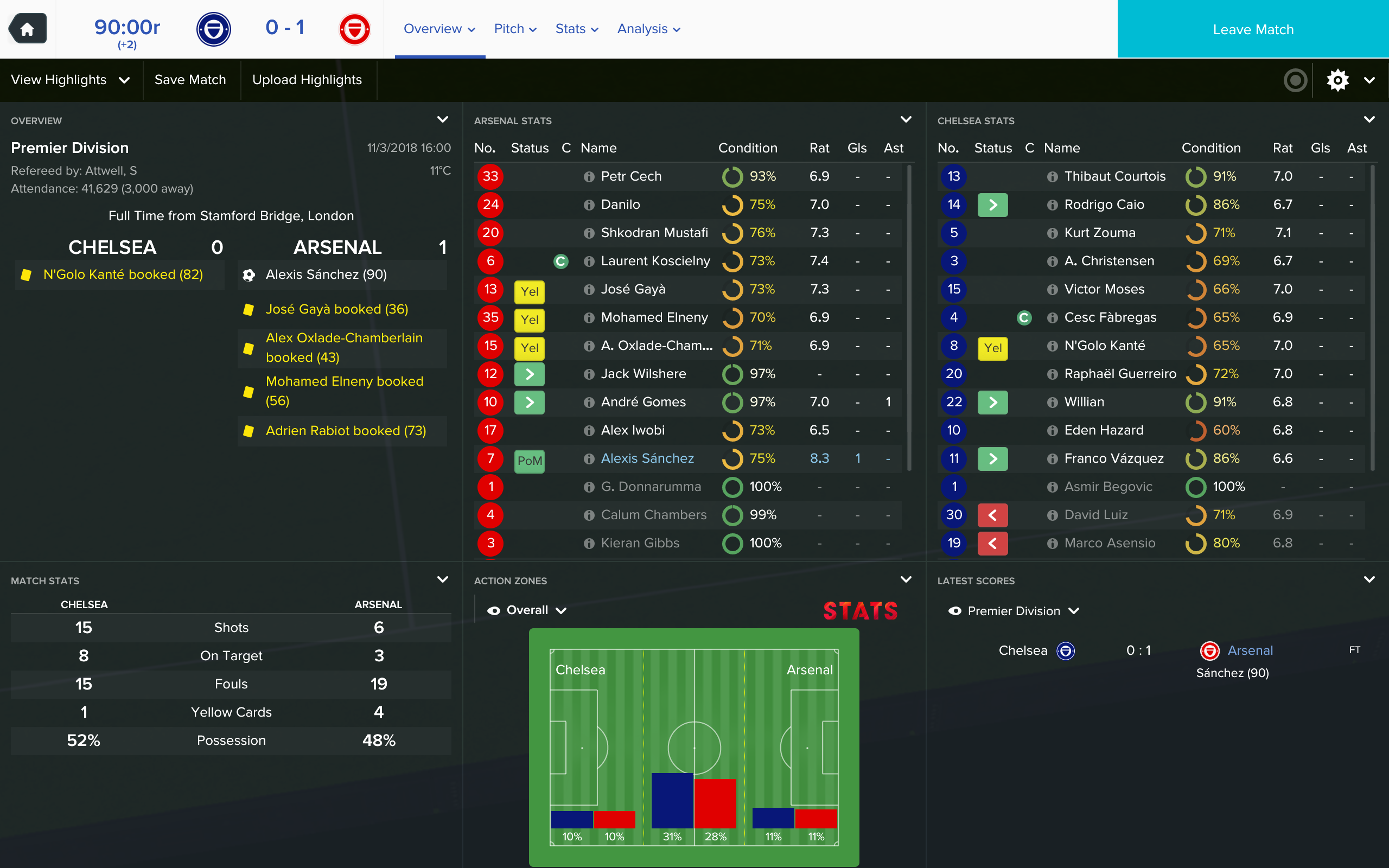 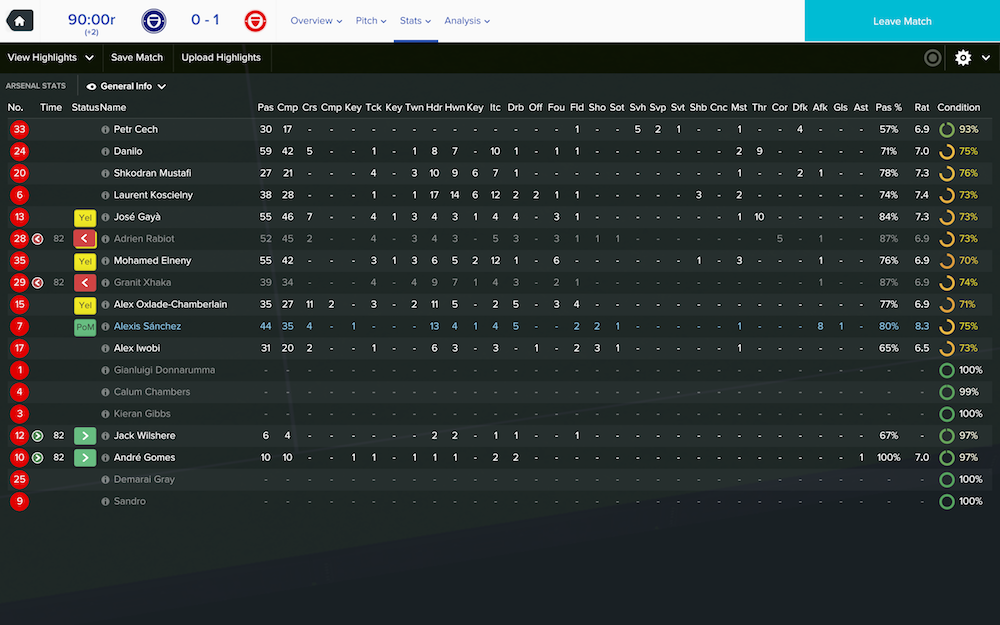 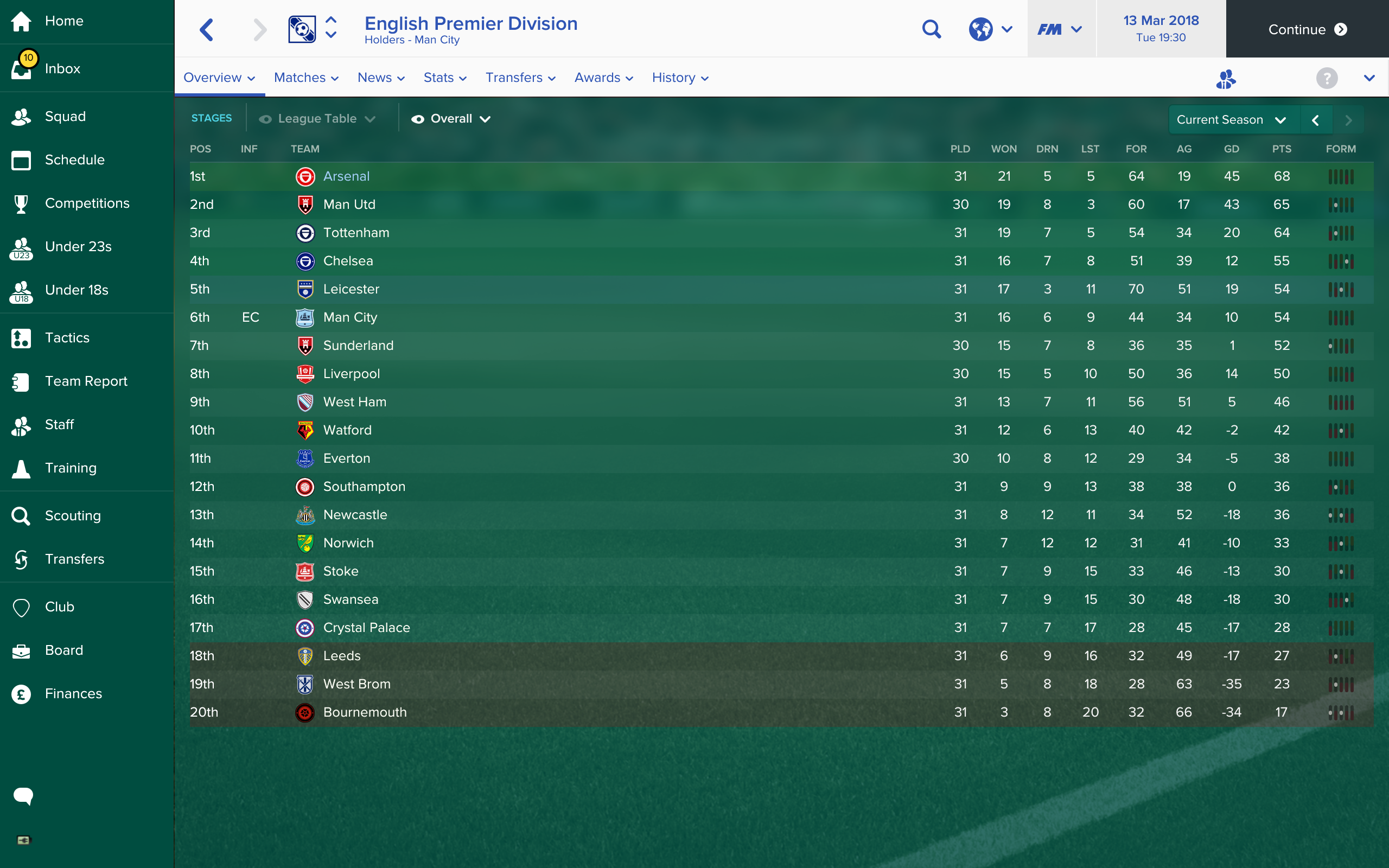 Because of the international fixtures, we close out the month with a home game against Southampton, a team we’ve never yet managed to beat. I would say that this would be a very good time to break that habit. There’s only one change to the team. Alex Iwobi’s performances have dropped over the last few games, so Demarai Gray will come in. Oh, and we’ll be back in Gooner Protocol too. Let’s not get over-excited. Let’s just ensure, above all else, that we’re not at home to Dr Fuck Up. 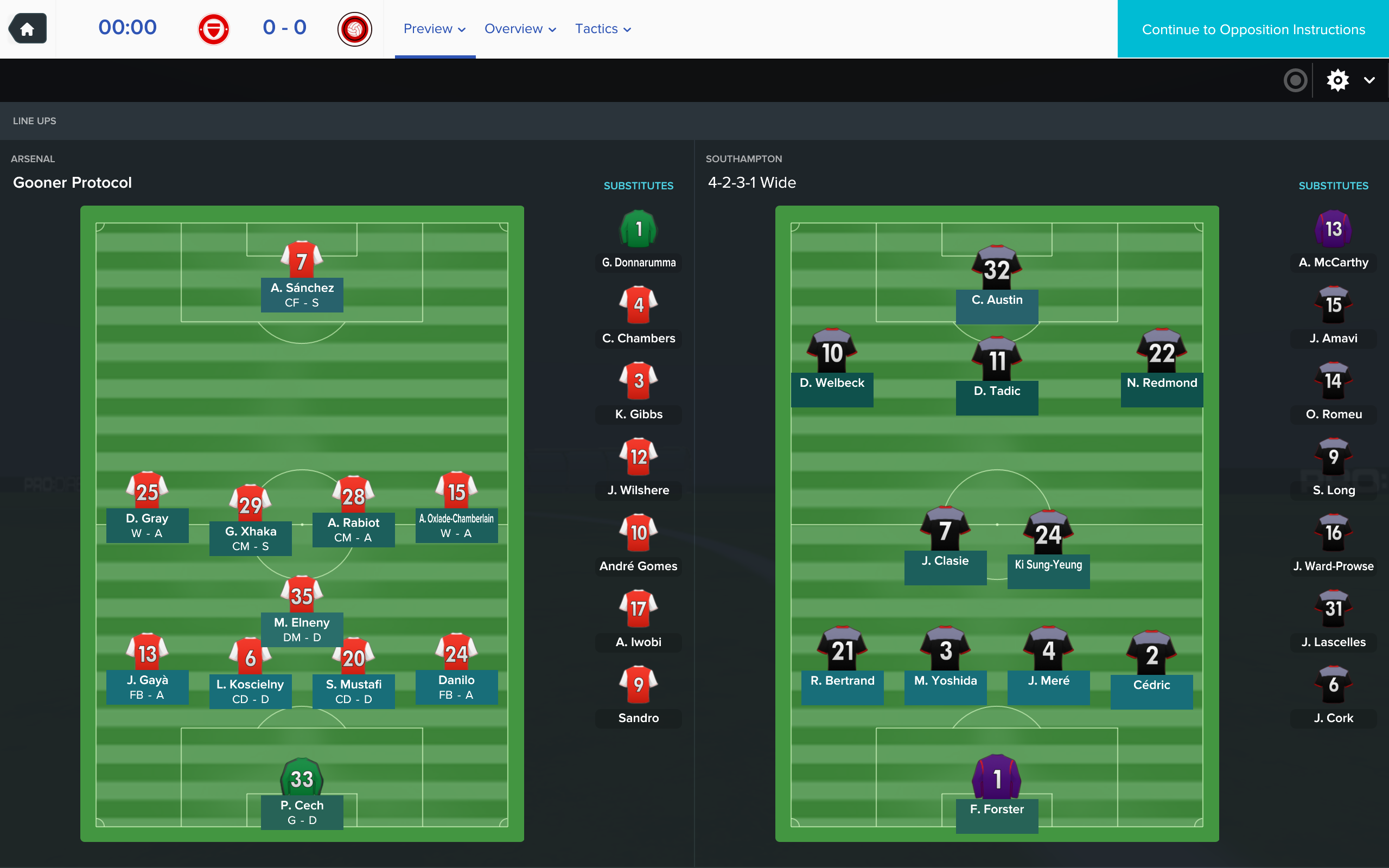 Alexis Sanchez plays like he has an early dinner reservation. Having gone close twice in the first ten minutes, he finally scores after 17, thanks to a timely pass from Gray. Shortly before half time, Alex Oxlade-Chamberlain breaks in our patented “counter-corner” defensive corner routine, exchanges passes with Adrien Rabiot and nudges in at the near post. Time to press on and push up the goal difference? Not on your nelly. Castle Protocol. Shut it down. Shut them all down. I am not here to entertain you. I just want the points and for my blood pressure to drop back within acceptable levels. 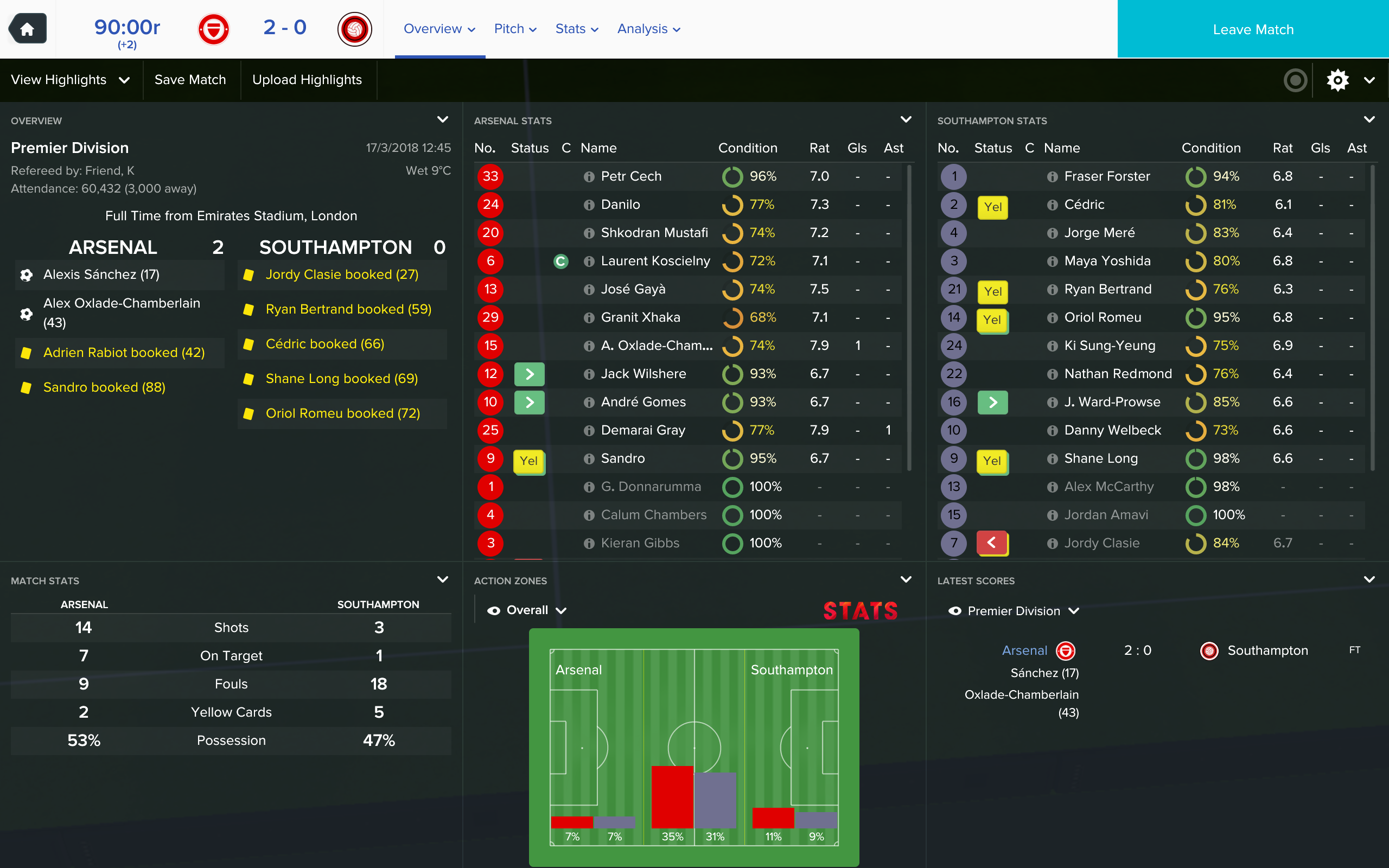 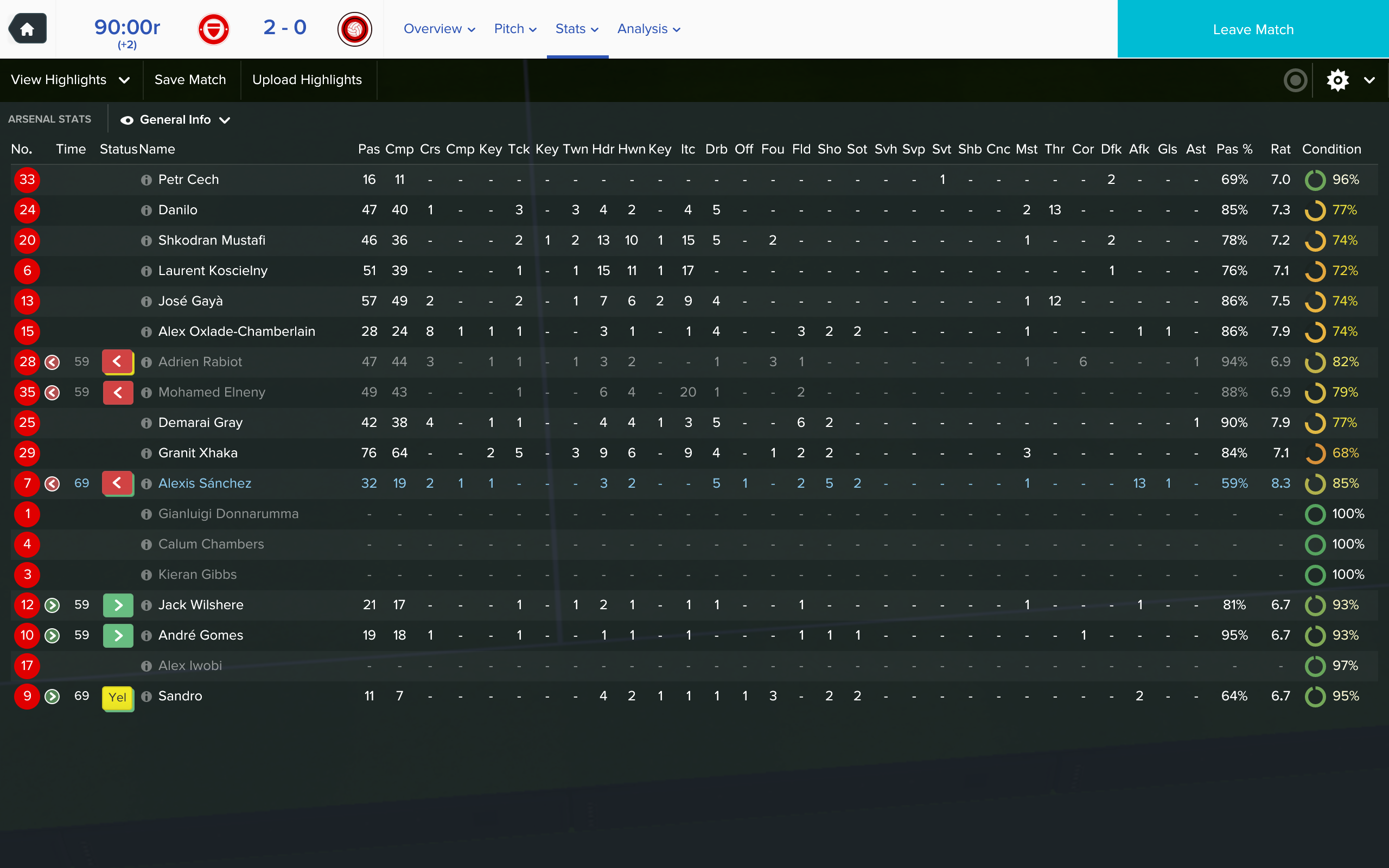 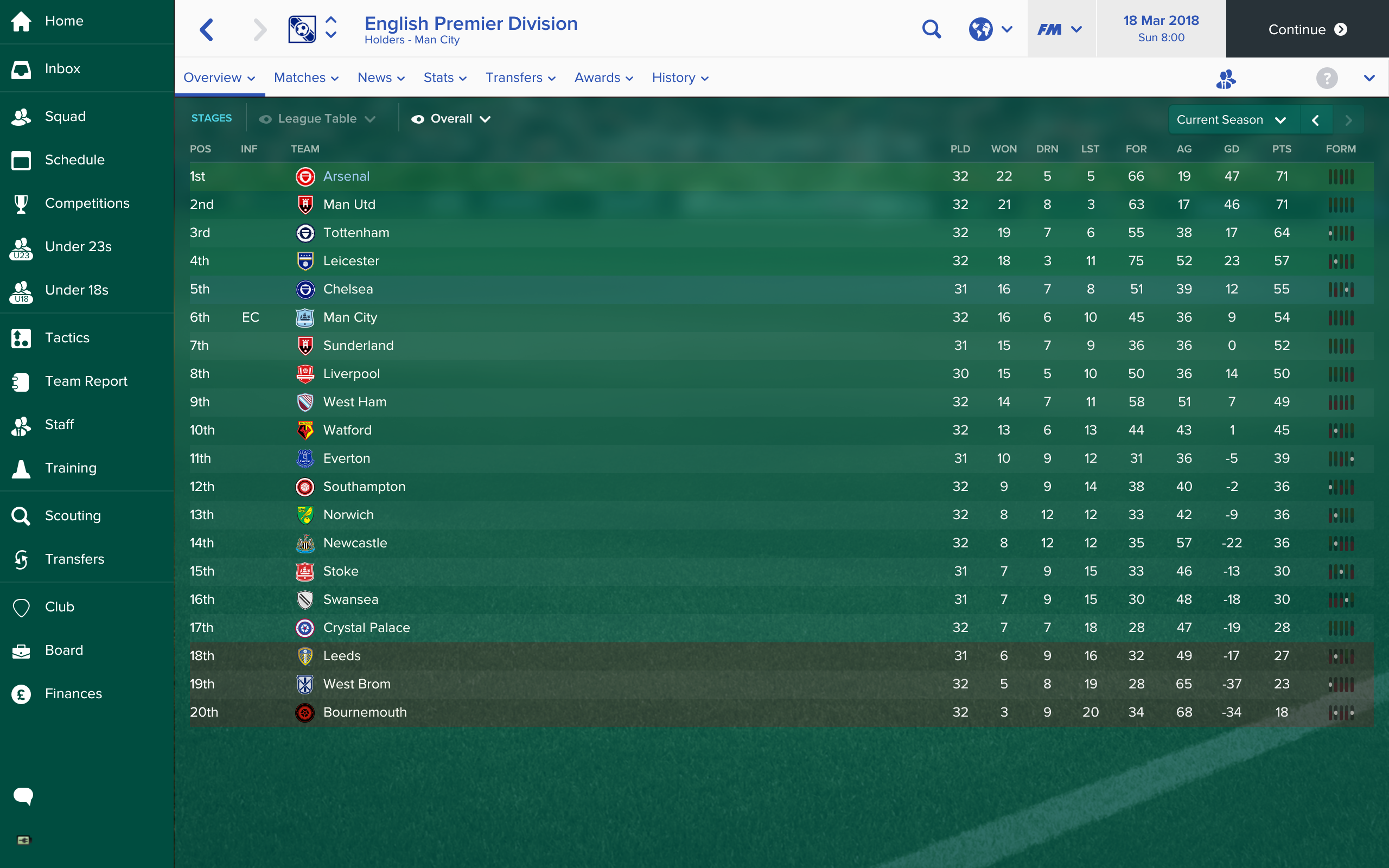 Next month the Champions League will resume. So what’s our reward for beating Atletico Madrid? Do we get lucky and land Olympiakos or Porto? No. We’ve got fucking Tottenham. 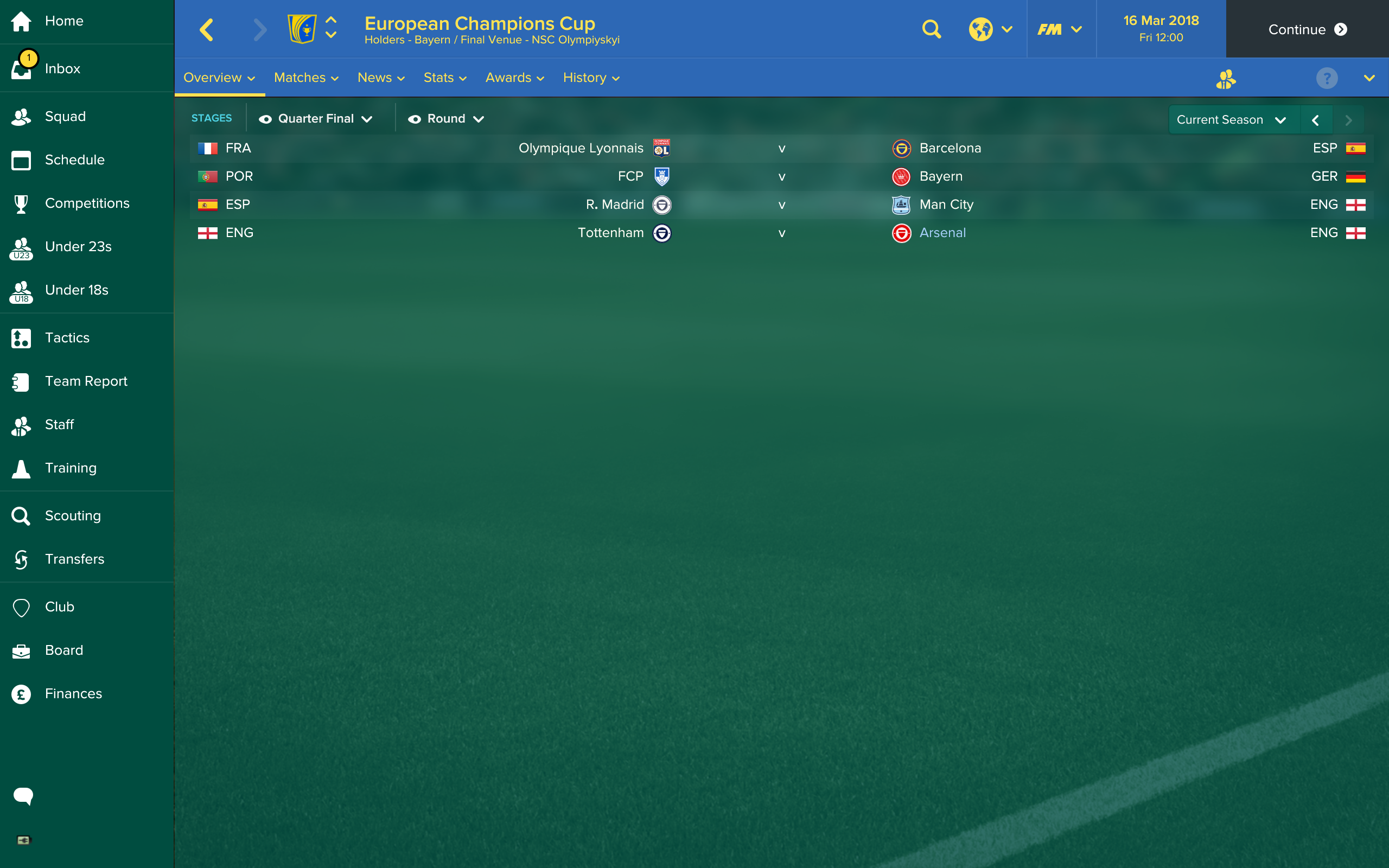