1 year ago I rejected a team lunch to watch the Everton cup final with @samgerfc there in a work meeting room I booked..same again this year

Two years of computer game time. Over 100 hours of actual human time. Diagrams. I have invested more in this one project than on any save across any incarnation of the game. And it’s nearly broken me.

We did the hard work. We beat Manchester United. We put ourselves in a position where all we had to do was beat an already relegated West Bromwich Albion to seal the title. Obviously, they put four past us and we finished second. And then I walked away. There have been moments when I have tried to go back, but the loading screen has invoked feelings of physical sickness and I’ve never managed to load up the game.

Because this has to end. I am in the Champions League final. I am up against a Barcelona side that won La Liga by a country mile. They still have Lionel Messi. But this has to end.

It may not end well. My squad is riddled with injuries and morale is, rather unsurprisingly, not what it should be. But Matt Stanger, recently returned from China, has a good idea. He suggests that I play against my development squad, rattle up a win and put some smiles on faces. For Matt, a man whose brief spell playing Football Manager in public ended in much the same manner as Icarus’ brief spell playing birdman, this is actually quite a good idea.

It also means that we can test a couple of things out. The first is a new set piece routine designed to exploit Barcelona’s use of Messi as the man on the near post at corners. I load up the near post with all of our big lads, sending the diminutive attackers to the far post in the hope that they drag defenders with them.

Analysis of Barca's last game, in accordance with Laws 5 and 6 of the Allardyce Blueprint. The near post is the 'small thermal exhaust port' pic.twitter.com/bcTfQ2w3Mc

The second idea is moving Alexis Sanchez to right wing. Now, I do accept that moving a man with 37 goals to his name onto the flanks is hardly ideal, but everyone else is injured. We either play Sanchez on the right or Ainsley Maitland-Niles. Yes, exactly. Besides, we do have Sandro as an option up front. Playing almost entirely from the bench, he’s rattled home 25 goals in his first season. So it’s not all bad.

Oddly, the West Brom game had a cataclysmic effect on confidence, so we're breaking up the fortnight of prep with a morale boosting friendly pic.twitter.com/4xofZSCOSF

And the friendly passes without a hitch. Granted, I would have preferred a larger margin of victory than 2-1, but I’m more concerned with morale and this has lifted everyone back into the green. However, I am a little worried by Sandro. He has eleven shots on goal, puts six on target and fails to score. If he’s that profligate against Barcelona then…well, we’re unlikely to get eleven shots against Barcelona.

I am delighted and reassured to have Alex Stewart by my side for this and when he arrives, he gets straight down to business. And after he’s finished telling everyone about his shirt, designed to look like the inside of your eyelids when you bang your head really hard, he has a look at my team.

Iain expressed shock and awe at my shirt choice pic.twitter.com/lkJc7WIMV2

I haven’t always done well with assistant managers. Cherno Samba’s short time at my side brought me the same amount of luck I’d get if I ran into a theatre, screamed “Macbeth! Macbeth! Macbeth!” and then jammed my fingers into a plug socket. But Alex is calm, collected and unafraid to suggest changes. He also notes that Alex Oxlade-Chamberlain has recovered far faster than I expected and will be able to play on the right. That spares me from the Sandro awkwardness.

And so, to the final. I’ve watched Barcelona and I know what to expect from them. They are really, really, really good at football and they’ll try to prove that very quickly by scoring lots of goals. There isn’t much more I can say. We are not the favourites.

(You can watch the Facebook live stream of the game here.) 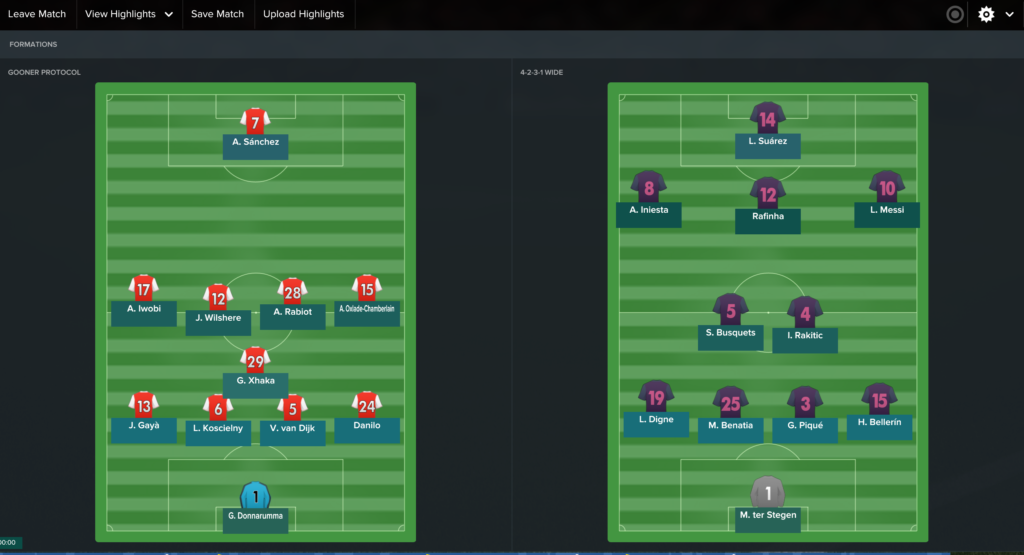 You know when you’ve got noisy neighbours and you can’t stop telling people at work how noisy they are and you know you’re being a bore, but you can’t help it because they’re just so bloody noisy and then a friend from work comes over and says, “Hey, your neighbours are really, really noisy,” and for a moment, just a moment, the suffering is alleviated because you know it’s not just you and you know that someone is there to share it with you and you feel that maybe you can get through it together?

“Why do they keep doing that?” says Alex with a worried look.

“Because they’re Arsenal players, Alex,” I tell him. And for a moment, I am free.

But that moment doesn’t last. We concede midway through the first half because of a chain reaction of ineptitude that barely even surprises me anymore. Gianluigi Donnarumma boots the ball out to Lionel Messi, the defence go into standby mode, Luis Suarez is left alone on the edge of the box and he cuts the ball back to give Rafinha the easiest finish of his life. And we’re 0-1 down. 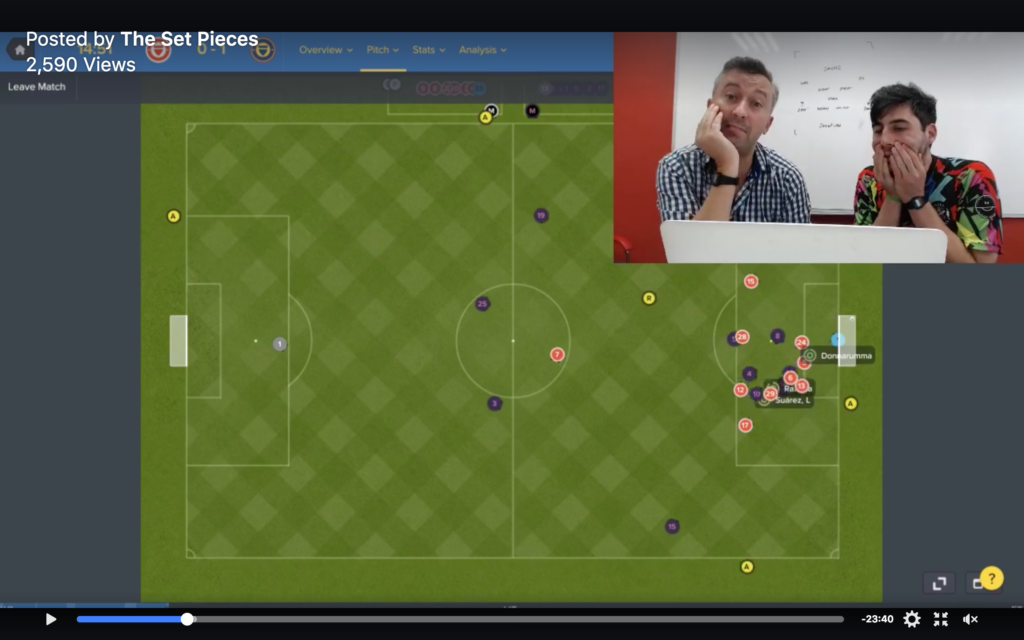 Alex offers counsel at half time, suggesting that we should push the wide men up to cause them more problems. It’s an idea with merit, but I think we had a decent half, the goal notwithstanding. We made plenty of chances, some good ones too, and I want to see what they’ll do when I bollock them. It is possible, looking back, that I reacted too quickly to the unfolding disaster at the Hawthorns. Perhaps a more cautious approach is required.

It works. With three minutes of the restart, we break with typical pace, Alexis Sanchez and Alex Iwobi exchange passes and the Chilean finishes from close range. 1-1. 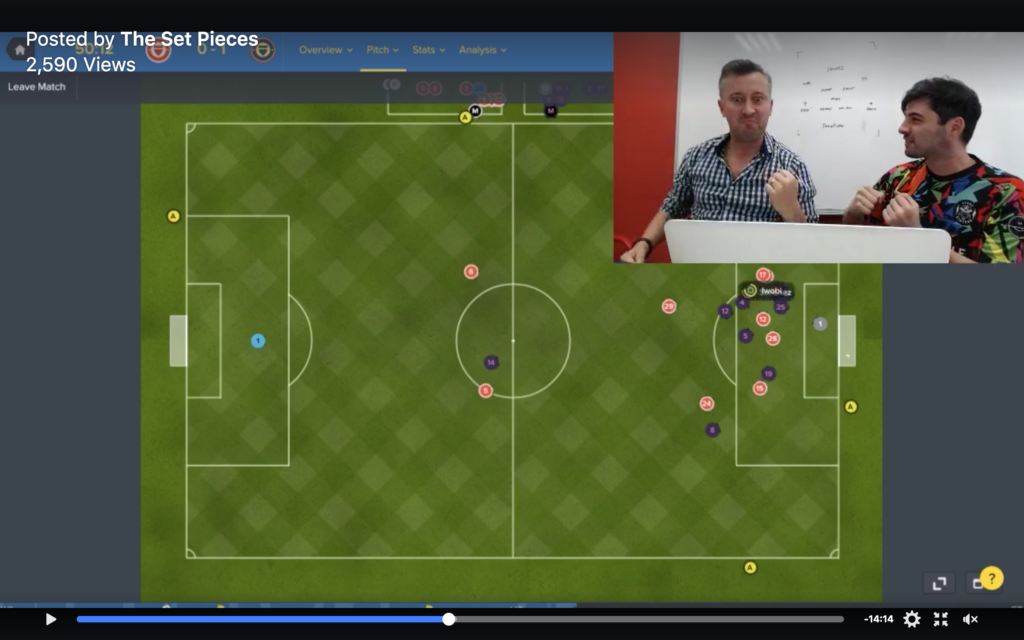 We keep making the better of the chances. By the time the hour ticks over, we’ve had six clear cut efforts on goal. Barcelona are pushing up too far. Alex recommends that we play more direct and I’m happy to concur. With 25 minutes left, we take the lead. Through a low cross. Time and time and time again, we loft crosses up for our tiny striker. The first time that we play one along the deck, we score. It’s Sanchez again. 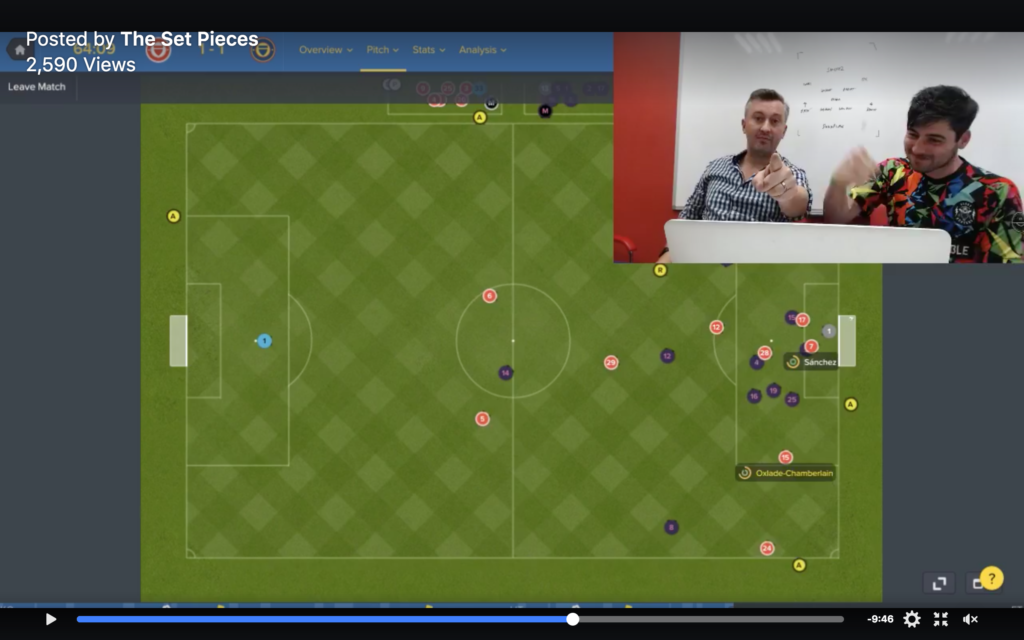 Now it’s just a case of holding our nerve. We know that the Castle Protocol can kill a game, but we know too that activating it too early and dropping too deep against a side like Barcelona can be absolutely fatal. I manage to hold out until the 80th minute before I put it into practice. In the 84th minute, something happens that changes the complexion of the game entirely. We score a third. From the penalty spot, admittedly. Sanchez has his hat-trick. 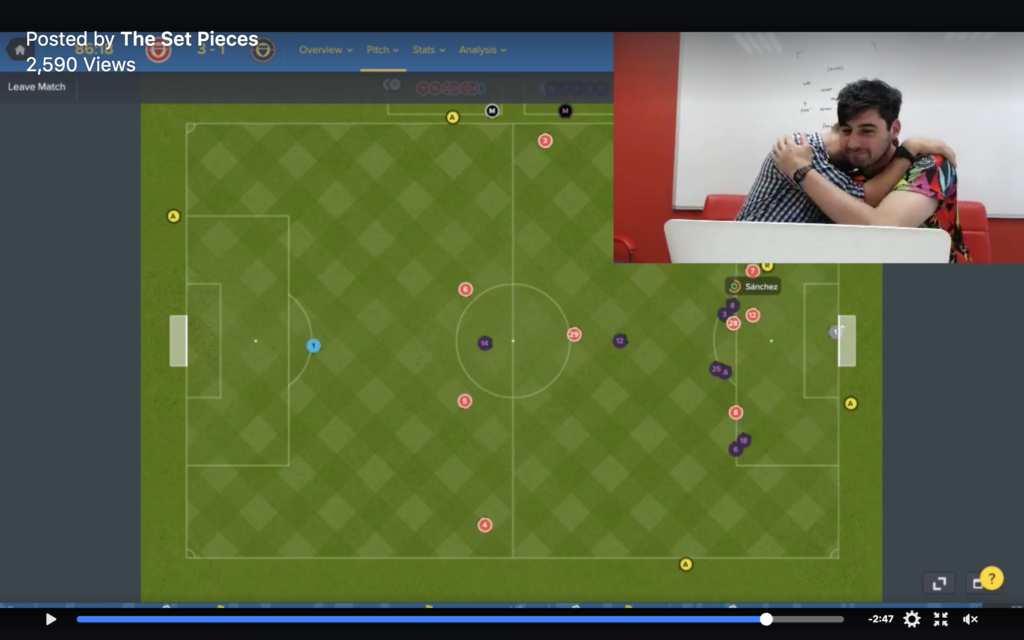 And that’s it. There is no way that even Arsenal can mess this up, though that doesn’t stop me fretting about it. The clock ticks down and our bench floods onto the pitch. But I don’t join them. 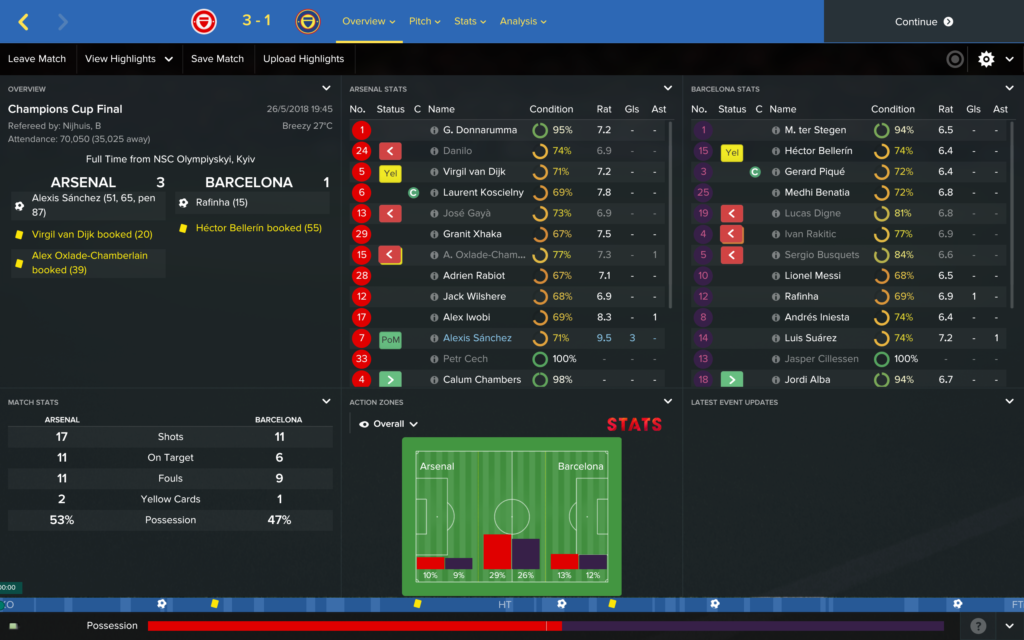 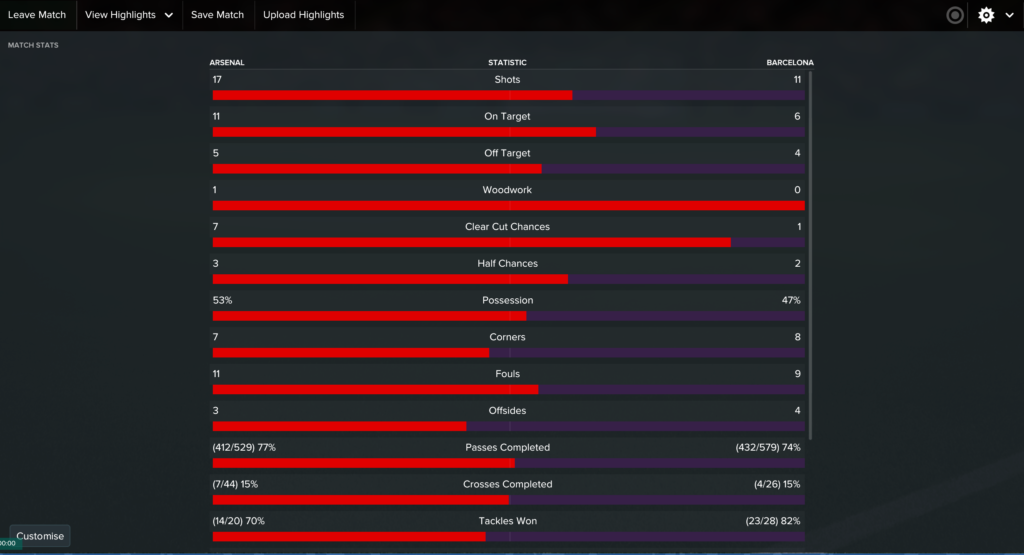 I nod, I check my cuff links and I turn away. I walk down the tunnel and leave them to it. I’ve won the Champions League, I’ve vindicated every decision I’ve made over the past two years, I’ve finally won a major trophy with a team that isn’t Celtic. But all I can think about is West Bromwich Albion.

I don’t know what I’ll do when Football Manager 2018 comes out. I don’t know where I’ll go or what challenges I’ll face. But I do know this: I will never, ever manage fucking Arsenal again. 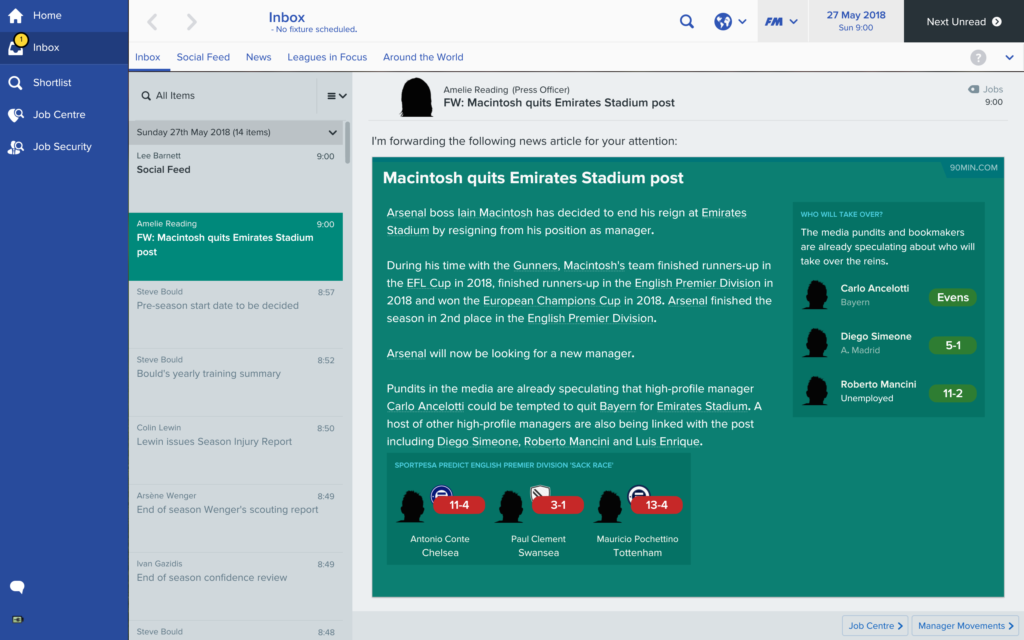