West Bromwich Albion used to be the archetypal yo-yo club, but they’ve stabilised of late and this will be their sixth straight season in the Premier League. Granted, there have been a few scares along the way but they won’t have to worry about relegation now drop-proof manager Tony Pulis is calling the shots. Or will they? It’s clear that their squad needs strengthening, but nothing has been happening this summer because of talks over a possible takeover. Those talks have now broken down, so it’s time to start shopping.

Despite starting last season with Alan Irvine in charge, the Scot never really convinced and was sacked in late December leaving the club in 16th place. Out went Irvine, in came Pulis. The former Stoke manager is renowned for the defensive solidity he drills into his teams, and this was an appointment which paid off instantly with him losing only one of his first eight matches in charge. With his personalised tracksuit and blinding white trainers, Pulis steadied the ship and guided the Baggies to a comfortable-in-the-end 13th place finish.

Two main problems instantly stick out for West Brom. One, their lack of goalscorers, and two, their ageing defensive options. Despite the best efforts of Saido Berahino, who scored an impressive 14 league goals last season, their next highest scorer was Brown Ideye on four. Granted, finding a striker who will put the ball in the back of the net consistently in the Premier League is no easy feat, but when your club record signing is scoring four in 24, some may see that as a concern.

Jonas Olsson, Gareth McAuley and Joleon Lescott provide plenty of aerial power and experience, but worryingly their combined ages will equal 100 come August. As more teams begin to build around speed, their backline looks to be an achilles heel, but an achilles heel covered in flashing neon lights with arrows around it. One saving grace for West Brom could be Pulis’ typically deep defences, which would nullify the threat of pace in behind.

Despite the £1.5m arrival of James McClean from Wigan, there is very little else happening for the Baggies regarding arrivals which will worry a lot of their fans as they head into the 2015/16 campaign. (Of the morning of posting, an £8m deal was completed for James Chester from Hull, who we think is a good addition despite the slightly inflated price tag).

So will Ideye live up to his price tag? Will they manage to cling onto Berahino? Who knows. The idea of a black hole swallowing up every living being on earth would ordinarily seem more likely than relegation under Pulis, but if they don’t start spending soon, they might be in trouble. 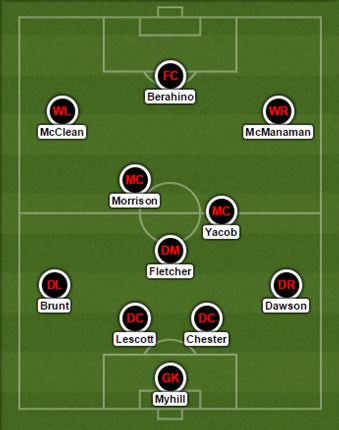 IAIN’S PREDICTION: 16th – With a month to go before the transfer window shuts, you’d imagine that the Baggies would bring in two or three players to chase away the fear of demotion. If they do, I think they’ll be absolutely fine. But if this period of limbo continues, they may have some problems.