“If you spend a hundred odd million, you’d expect to be challenging for the league.” That was Brendan Rodgers talking about Tottenham and their post-Bale spending, which amounted to £96m and resulted in them finishing sixth. Last summer, Liverpool spent just over £110m post-Suarez and also finished sixth. Whoops. Still with his future far from certain, there is no more room for error at Liverpool for Rodgers and he will know that. If he doesn’t know that, then he will soon enough after he feels the breath of John W Henry and Tom Werner down his neck next weekend.

Last season was simply not good enough. After being inches away from winning the title the previous season, all involved with the club would have been hoping to go that one step further. But that didn’t quite go to plan. It was a mess. The inevitable sale of Luis Suarez to Barcelona was a huge blow, but this was also added to by the injuries of Daniel Sturridge, the uncertainty of Simon Mignolet and the dreadfulness of Dejan Lovren. Not to mention their other big money signings in Lazar Markovic, Mario Balotelli and Adam Lallana all failing to settle in at Anfield. As wonderful a player as he is, a club like Liverpool should not be relying on a 35-year-old Steven Gerrard who was leaving come the summer to drag them through matches in the Premier League, which is what it seemed like during the final few weeks.

Keen to turn their fortunes around, they acted quickly in the summer transfer market, signing James Milner, Danny Ings and Adam Bogdan all on free transfers. These three were then followed by the silky Roberto Firmino coming in from Hoffenheim for £29m, and Nathaniel Clyne for £12.5m from Southampton, who is a considerable upgrade on the departed Glen Johnson. After the messy transfer of Raheem Sterling to Manchester City for £49m, Rodgers signed another long term target in Christian Benteke for his £32.5m release clause. Youngster Joe Gomez, who has already impressed throughout pre-season was also signed from Charlton for £3.5m. The accountants have definitely been busy.

The new blood coming into the club are welcome additions to the first team, in what looks like a very strong Liverpool squad. They are no longer reliant on Sturridge regaining fitness all the time, with the arrivals of Benteke and Ings who have both shown that they can score goals in England’s top flight. Creativity surges through the final third with Brazilians Firmino and Coutinho, in addition to the industry and productivity of Henderson and Milner in the centre. You can say what you like, but that is a side loaded with talent.

The two big factors in what will determine the success of Liverpool’s season are 1) Brendan Rodgers, and 2) how well their new signings settle. Rodgers was heavily praised for his high intensity, attacking football throughout the 2013/14 season, but was regularly out-thought and exposed last season. He needs to show now that he is capable of taking this Liverpool side further, and not that the majority of his success as Liverpool boss was him being piggy backed by the explosive form of Suarez and Sturridge. Also, we saw how big signings failing to settle impacted the Reds last season, and with a lot of talent coming in for more hefty price tags, they will be hoping that they hit the ground running. The top four may just be a stretch too far again, but they will be fighting until the end for sure. I hope. 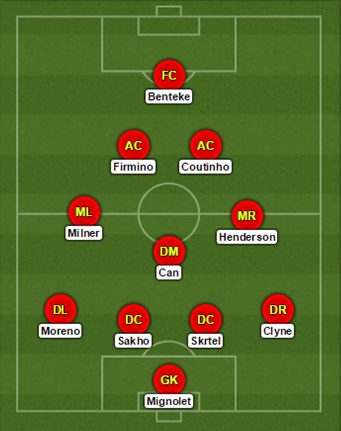 IAIN’S PREDICTION: 5th – This will be a weird season for Liverpool. Their fixture list is gruesome and it almost suggests that Rodgers will either go off like a rocket, in which case the top four is on, or that he’ll be sacked by November. Either way, there should be enough quality for fifth here. I remain to be convinced that they can do better than that though.