Despite the PR mess behind the whole Sterling saga, City paid the money, kept their heads down, and look all the better for it. £49m. It is a lot of money, but when you consider all of the factors it looks to be a necessary piece of business rather than a luxury one.

Sterling remains one of the brightest young talents in the country and made no secret of his desire to leave Anfield this summer. Homegrown? Check. Better than Navas? Check. World class potential? Check. International footballer? Check. 20 years of age? Check. It’s almost the perfect signing for them. Scoff and bemoan the fee all you like, but when your owner makes £115,000 a minute, 50 million quid is pocket change.

The £8m addition of Fabian Delph brings energy and technique to their midfield, while 18 year-old Patrick Roberts brings skill and speed to their forward line, not to mention considerable hope for the future. Suddenly their homegrown quota looks a lot more satisfying. Despite spending almost £70m already this window, it would be naive to think that their ventures in the market are finished with Wolfsburg midfielder Kevin de Bruyne being heavily linked in both the German and English for a big money move.

City lost seven matches last season, compared to Chelsea’s three. It’s not difficult to see where it all went wrong for the former champions. Their away form over the years has always been patchy, and this weakness away from home was exposed again after losing five games on the road throughout 2014/15. However, they usually make amends for that by putting five or six past anybody who stands in their way at The Etihad. Last season was different. There wasn’t that ominous feeling that Burnley were going to get smashed 5-0, or Leicester were going to lose 6-1. Teams were going there with belief, and this needs to be addressed ahead of next season.

Not only do City need to sort out their away form, but they need their big players to make a difference. Already vulnerable defensively with the likes of Eliaquim Mangala, Martin Demichelis and Gael Clichy, the last thing they needed was their captain making costly mistake after costly mistake. The Belgian is usually their Mr Reliable, the solid and composed presence in the spine of the side who will get them through matches with sheer force. He struggled. Yaya Toure, their train through the middle of the park? Laboured. David Silva, their creative wizard in the final third? Inconsistent. Samir Nasri, Jesus Navas, Edin Dzeko, Fernandinho, Stevan Jovetic? Non-existent.

Manchester City have one of the most talented and highly paid squads in Europe, let alone the Premier League. The lethargy on display last season was simply not good enough for a side of their ambitions, and if they have hopes of winning the title this season then that will have to change. Pellegrini is not blameless, sometimes lacking that real sense of authority which often breeds laziness throughout the ranks, and he will be hanging above the crocodile pit as they wait for the smallest of slip ups. When on song, they are an irresistible side to watch going forward and are capable of dispatching any team with ease. You just never really know what side is going to turn up. 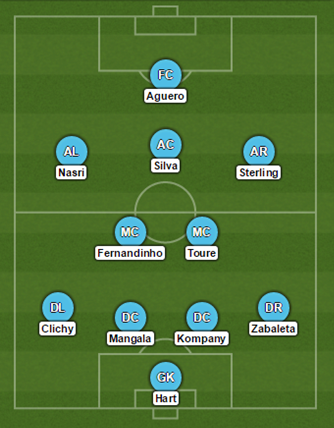 IAIN’S PREDICTION: 4th – It’s not the team I doubt, it’s the background noise. This is the last year of Pellegrini’s contract and the speculation over his replacement, unless his services are unexpectedly retained, is going to be intense. How much authority will he have in the dressing room? It’s going to be a tight top four this year and I fear that this element of doubt is going to make all the difference.