So what kind of Manchester United will we see this season? The disjointed, occasionally excellent, occasionally miserable side of the past two years? Or something new? For the money that has been spent, it should certainly be the latter. But it’s not just the scale of the spending that indicates improvement, it’s the way the money has been spent. United have done well this summer.

This football club has been crying out for a dominant midfield for years. Sir Alex Ferguson was arguably the greatest British football manager of all time, but his failure to deal with this deficiency was ruinous. Now, in Morgan Schneiderlin and Bastian Schweinsteiger, there is a ferocious midfield pairing capable of breaking up attacks and starting a few of their own. Pace in the final third has been an issue too, but Memphis Depay should help on that front. And if Van Gaal doesn’t trust Rafael, then perhaps Matteo Darmain might be a better answer to the right-back question than Phil Jones.

Two other questions remain, however. The first, and most crucial, is the future of David De Gea. It is not simply a case of retaining him, it’s ensuring that he remains as focused and indomitable has he has been for the past two years. Had it not been for his efforts, United would be in far worse shape. Despite suggestions that the saga was over, Van Gaal attributed the signing of Sergio Romero to the lingering doubts over De Gea’s future. If the Spaniard stays, when he has made it clear that he’d like to leave, will he still be the same goalkeeper?

The second question is of Wayne Rooney. Can he put in the sort of season to justify his demand to play front and centre? Rooney’s willingness to train hard and to play where required impressed Van Gaal last season and he’s been bullish in pre-season. Now he needs to deliver. United need a 20 goal season from him. And leadership. And inspiration. And no trying to chop Stewart Downing in half, even though we’ve all had fantasies of doing that from time to another.

The past two years have been a tale of excuses. The shadow cast by Ferguson was too long. The manager was out of his depth. The squad was too weak. A new manager was required. More money needed to be spent. The new manager needed time. The team needed time. Enough. It’s time for the real United to step up again. And if they can’t win the title, they need to at least be able to challenge for it. 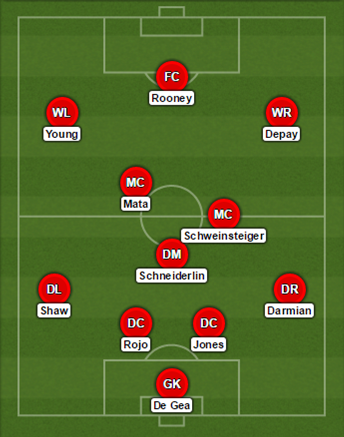 PHIL’S PREDICTION: 4th – Despite the arrivals of Darmian, Schneiderlin and Schweinsteiger who I all think are great players, something just doesn’t convince me about Van Gaal. I thought they were extremely lucky last season to have De Gea in the form he was in, otherwise it could’ve been a different story. Question marks still remain over their defence which in truth, is average and whether they add or not remains to be seen. I don’t see them challenging for the title all the way.