Well that wasn’t what was supposed to happen. Like their fellow Merseysiders, Everton were unable to build on what was a very impressive 2013/14 campaign. After just losing out on fourth place to Arsenal, hopes were high that Martinez’s men could regroup, add and go again next time round. The signing of Romelu Lukaku for £28m turned a lot of heads, and many were backing the Toffees to run the top four very closely again. They didn’t quite manage it. In fact, it was an extremely underwhelming campaign, only managing to tally up 47 points compared to their record breaking 72 the previous season.

So what went wrong? It could have been a multitude of things. The World Cup could have had an effect on many of their players, both mentally and physically, but of course they were not the only Premier League side to experience this. Was it the injury to Ross Barkley in training just before the season started? Possibly, but many would argue that the midfielder is still struggling for consistency at this stage of his career. Poor results at Goodison Park against Chelsea and Arsenal? This may have hit their confidence hard, but teams like Everton should be able to leap over hurdles like this. If not leap, at least keep running through them until things get better.

Everybody knows that last season wasn’t good enough. But the question is, do their prospects for 2015/16 look any brighter? One huge factor is the lack of Europa League football. While the appeal of playing in Europe is irresistible to most teams, it is a brutal test on your squad and people underestimate how difficult it is to play at your highest level twice a week over the course of the season. This will immediately keep legs and minds fresher, in addition to reducing the amount of injuries due to prolonged recovery periods. A summer in which the squad has rested and completed a full pre-season should improve their fortunes drastically.

The £4m signing of Gerard Deulofeu from Barcelona is a really exciting one for Everton, as the Spanish winger enjoyed a terrific loan spell with the club two years ago. Now 21-years-old, he will be looking to take his game to the next level, and will provide lots of speed, trickery and width for the Blues down their right hand side. The free transfer of Tom Cleverley from Manchester United is a sensible if underwhelming one, and he will provide a good midfield option when McCarthy and Barry are absent. Martinez will also be looking to the likes of Phil Jagielka, Leighton Baines, Lukaku, Seamus Coleman, Barkley and Kevin Mirallas to step up, as on their day they are capable of beating anybody. The rapid rise of John Stones is a another sign of better things to come, as is there reluctance even acknowledge Chelsea’s media games and sub-par offers.

So what do Everton aim for? While the top four may be out of reach for them, those Europa League places are definitely up for grabs. In spite of the harm it caused them previously, to progress as a club, that is where they need to be. Their squad has matured, as well as possessing that little bit of star quality to really make a difference. Martinez will have learnt a lot last season, and he will be adamant on making things right because despite their disappointing 2014/15,  because he is a good manager in charge of a good squad, who should be doing a lot better. 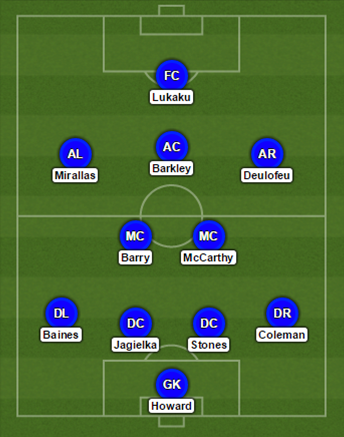 IAIN’S PREDICTION: 8th – It was a difficult second season for Roberto Martinez, but he’ll have learned a lot about himself and his players during those bleaker moments. Getting Deulofeu in permanently is a good move and Tom Cleverley is a natural fit for their style. They need to be better at the back if they’re going to challenge for Europe, but they should be decent enough.