We take Stoke City for granted these days. They’ve been welded to the middle of the Premier League table since 2008 and we’ve rather forgotten that up until their promotion, they had been in exile for 23 years. This is worth mentioning because even if they slip a little this season after back-to-back ninth place finishes, they will still be in excellent shape, all things considered. But there’s very little to suggest that they will. Not this season anyway.

The biggest problem is the departure of Steven N’Zonzi. He made this Stoke team tick, regulating their play in the middle with his mobility, desire and an excellent range of passing. Marco van Ginkel, brought in on loan from Chelsea, has big shoes to fill. If he is still the same player he was when he shone in the Eredivisie, he should be fine. But injuries and lack of playing time may have taken their toll.

But that’s the only place that Stoke look weaker. The foundations of the Tony Pulis era remain sturdy. They are still a strong side, with players like Jon Walters and Ryan Shawcross to strike fear into the hearts of their opponents. But they’re a skilful side too. Charlie Adam is back to the form that caught the eye at Blackpool, Bojan’s return from injury will feel like a new signing and it will be nice to see more of the promising Oliver Shenton as well.

Peter Crouch’s spindly legs may be fading, but former Real Madrid B striker Joselu is in place now after a mixed period in Germany. Like Crouch, the 25 year old has (altogether now) a nice touch for a big man and he could prove a very useful acquisition. And let’s not forget Mame Biram Diouf, an eccentric talent, but one who delivered 12 league goals last season.

Expectations are higher now for Mark Hughes. He has helped his side to evolve into an altogether more attractive proposition, but the fans will want something to show for that progress soon. There was genuine frustration at their FA Cup exit to Blackburn last season, a sense that a real chance for silverware had been thrown away. If Hughes finds himself in the position to choose, he’d do well to make a cup run his priority.

But that really sums up the steps that Stoke have taken, not just under Hughes, but under Pulis too. Yes, they’ve been well funded by their owners, but it wasn’t that long ago that they were just another industrial town team, scrapping their way through life in the badlands outside the Premier League. Now they’re stable and solid enough not to have to worry too much about relegation. They probably don’t get enough praise for the progress they’ve made. 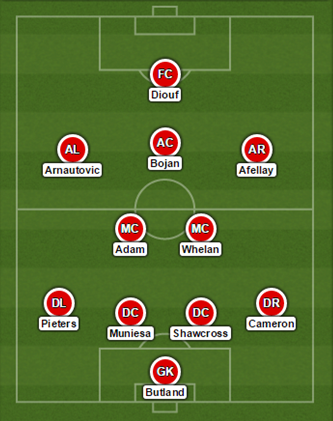 PHIL’S PREDICTION: 10th – I’ve actually been quite impressed with Stoke under Mark Hughes, which is annoying to say as an Arsenal fan. They still have the ability to play their physical game, but in Bojan, Arnautovic and now Afellay they have lots of creativity and intelligence going forward. N’Zonzi is a big loss in midfield for them though. While I don’t think they will break into the European places, they will definitely trouble a lot of teams next season, especially at The Britannia.