Last season was boring and it was boring because of Chelsea. Not because Chelsea are boring, it must be said. There is nothing boring about excellence. It was boring because they were so, so, so much better than everybody else. It didn’t even matter that they jammed their gearbox at some point in February and clanked over the line in entirely unremarkable form. Even a tired, flat Chelsea could hold off the opposition last term. So has anything changed?

And Chelsea’s recruitment drive this summer hasn’t found anything worth getting too excited about either. Asmir Begovic is a very good goalkeeper, but is unlikely to provide anything more than slight competition and cover for Thibaut Courtois. Radamel Falcao was worth getting excited about, but that was before a serious injury, a disappointing season with Manchester United and an even more disappointing Copa America. Their other summer capture, Nathan, has already been dispatched to Dutch Chelsea, otherwise known as Vitesse Arnhem. So is the game up? Probably not, no.

Where, realistically, could Chelsea really improve their squad? Diego Costa is terrifying, Eden Hazard is the player of the year, Oscar has actually had a summer holiday for once and Willian, while not quite in the same class, is still a formidable presence. Cesc Fabregas and Nemanja Matic are arguably the best central pairing in England and Chelsea conceded fewer goals than any other team in the league last season, so the defence is probably fine too. They’re already better than everyone else, so it’s no surprise that they’ve opted to fill the Cech and Drogba shaped gaps in the squad and push on.

The real edge for Chelsea is Jose Mourinho. He has obvious strengths in the field of tactics and man-management, but it’s his gift for being a complete bastard that will see him through this season. He is not bound by an obligation to codes of honour, nor is he distracted by a desire for popularity. He will be a enormous throbbing pain in the arse for Louis van Gaal and an increasingly intense irritant to Manuel Pellegrini, but it’s his treatment of Arsene Wenger that will capture the imagination this year. Mourinho only attacks teams he considers rivals, so Wenger should probably take what’s coming as a compliment. But we all know that he won’t. Mourinho will poke and poke and poke until Wenger either breaks down in tears or is reduced, once again, to trying to throttle his tormentor on the touchline.

This season won’t be boring as last season, but it’s still likely to have the same outcome. Chelsea needed to be usurped and, right now, there’s no evidence that anyone has improved enough to do it. 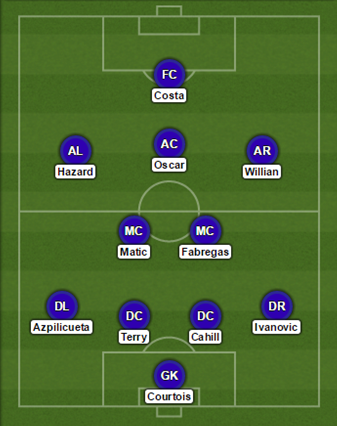 PHIL’S PREDICTION: 1st – They were the best team in the country last year unfortunately, and despite some blips here and there, the title was really settled in January. I think the league will be a lot closer this time around, with Arsenal, City and United showing ambition for the upcoming campaign. I think they will edge it though. Mourinho just knows how to win, as annoying as it is. Anyone’s perfectly free to prove me wrong though! Preferably you, Arsenal.