After years of words like ‘close’, ‘nearly’, ‘fading away’ and ‘collapse’ dominating almost every Arsenal related headline, things are looking up at the Emirates. After their nine year trophy drought (Was it nine? Nobody ever mentioned it), back to back FA Cup triumphs have let some sunshine through the clouds.

In recent seasons, Wenger has had to rebuild his teams whenever star players were poached, but that’s no longer the case. He has now found a reliable core of footballers, having struck a balance between youth and experience, along with the grace of Mesut Ozil, the spark of Alexis Sanchez and the engine of Aaron Ramsey. Naturally, calls for this mythical 30 goal a season striker still ring out, but Olivier Giroud has done a fine job leading the line after his initial slow start at the club.

The purchase of Petr Cech from Chelsea was a ruthless one by Wenger, with two goalkeepers already at the club in the form of Wojciech Szczesny and David Ospina. It shows that the Arsenal boss wants to challenge here and now. The Czech international brings confidence to the back four, in addition to a winning mentality that could be priceless to this current crop of players. Their transfer business may be done, but you can bet on them watching the market until the very last minute.

You don’t need to be a genius to see where the banana skins may lie for Arsenal. Injuries are forever a problem at this club, but the appointment of performance specialist Shad Forsythe has improved their situation. They still lost a number of key players to long term injuries last season which made it, and will continue to make, a challenge on all fronts extremely difficult.

The other problem is naivety. In last season’s Champions League, they were drawn against Monaco despite finishing second in their group and nobody could believe their luck. Years of Barcelona and Bayern had finally turned into Monaco. They ended up losing 3-1 at home after being caught on the counter repeatedly, including the concession of a suicidal third despite getting one back in the 91st minute. Naturally, they won 2-0 in Monaco, but it was too little too late. The Gunners will be calling on their experienced heads to make sure that this doesn’t happen again, because no matter how much they look to have changed, their old ways always seem to come back to haunt them.

With their strongest squad since days of the Invincibles and Arsene Wenger getting his mojo back, can Arsenal finally sustain a convincing title challenge? Will they be able to progress further than the Round of 16 in the Champions League? Could they become the first team to win three FA Cups in a row since Blackburn in 1884, 1885 and 1886? It’s certainly within their grasp.

POTENTIAL LINE-UP: (We are aware that Alexis Sanchez will not be available for the start of the season). 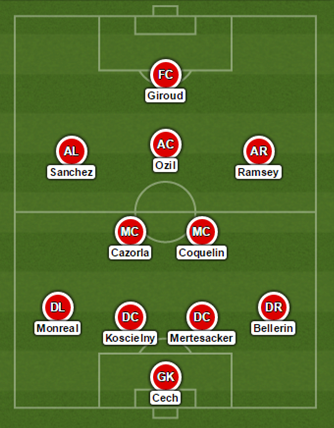 IAIN’S PREDICTION: 2nd – I thought long and hard about this one, but I’ve been stung by Arsenal before and I’m not ready to forgive. Consider me a confirmed Arso-sceptic. They’re in the best shape they’ve been in for years, but they’re still Arsenal. Arsenally old Arsenal. Something’s bound to go wrong, isn’t it?