They began their 2014/15 campaign with ex-player Neil Adams in charge, but after leading the table for a brief spell around September, their form dropped significantly towards the end of the year and he was relieved of his duties. In came 33 year-old Alex Neil from Hamilton Academical, who oversaw a dramatic improvement in the East Anglian club’s fortunes, guiding them to a third place finish and a win in the play-off final against Middlesbrough to guarantee promotion.

What was impressive about Neil’s men last season was their ability to score goals from all over the pitch. Naturally, as strikers, Cameron Jerome bagged 20 goals, followed by Lewis Grabban and Gary Hooper both on 12. However, contributing from midfield, Bradley Johnson scored 15, along with Jonny Howson with nine and Nathan Redmond adding six towards their overall total of 88 goals. Even Russell Martin, Steven Whittaker and Martin Olsson contributed with five between them from defence.

While Norwich have kept the core of their squad together which is a huge positive, it still looks lacking in star quality as well as depth, despite the arrivals of Youssuf Mulumbu and Graham Dorrans from West Brom on free transfers. With Neil recently venting his frustrations about their lack of activity in the transfer market, it looks as if they will be late shoppers as the window closes and sellers become more desperate to clear their wage bills. Is their squad as it is, capable of surviving in the Premier League? In spite of their solid starting eleven, which has more than enough top flight experience within it, they’ll be facing an uphill battle from minute one.

However, like their fellow promotees, expectation being placed on Norwich will be significantly lower than most of other teams in the league which could already give them an advantage. Not to mention the ease in which they dispatched of Middlesbrough in the play-off final. They’ve got balls and they’ll certainly be up for the fight. With a young and ambitious Alex Neil ready to make his mark, and a squad filled with journeymen aching to prove themselves, why couldn’t they survive? It’s unlikely, but not impossible. Let’s put it this way, they can’t be much worse than the last time they were in the Premier League. The only way is up, Canaries. Isn’t it?

POTENTIAL LINE-UP: (Norwich have since signed Robbie Brady from Hull who will most likely replace Martin Olsson at left back, or Hoolahan slightly further forward). 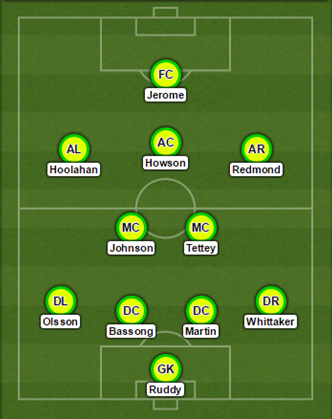 IAIN’S PREDICTION: 18th – Every year, you look to be convinced by the newly promoted teams and I’m just not sold on Norwich. They’ve done well to bounce back so swiftly, but I don’t think they have strengthened enough to consolidate.