Oh, Bournemouth. You saucy devils. Stylish and adventurous in their football, they completed a late charge against the odds to win the Championship title. Playing their football in England’s third tier just five years ago, their rise to the Premier League is a story for the football romantics.

The most important thing for any promoted team is to keep the nucleus of last season’s squad together, and so far there are no hints of anybody jumping ship. Simon Francis, Steve Cook, Harry Arter, Matt Ritchie and Callum Wilson made 220 appearances between them last season in the league, and were all key figures in their success. The fact that they have held on to their manager, the highly rated Eddie Howe, is another huge bonus as they look to make their transition into the Premier League as smooth as possible.

Their ethos remains based on passing and movement, but they may have to be more open to tactical flexibility next season as they will face a dramatic jump in both technical and physical quality. Games against the strugglers are the game when they will be looking to impose themselves, but when they’re matched up against the bigger sides they will need to be wary of being out of the contest before it’s even started. There is no reason why Bournemouth cannot compete with every side in the top flight, but a failure to adapt their style at all could cost them dearly, and Howe will have acknowledged this.

Counter attacking football will be crucial and with the signings of Christian Atsu and Joshua King, in addition to the retention of Matt Ritchie and Callum Wilson, this could also become a very viable option for the south-coasters – especially away from home.

The £8m signing of highly rated youngster Tyrone Mings as well as Sylvain Distin from Everton on a free transfer are two clever pieces of business by the club. Standing at 6’5”, Mings will bring speed and aerial power at both ends, while Distin brings physicality, leadership and organisation to their back four – not to mention nearly 20 years of first team experience. While they have made some shrewd signings for very little money, they might need to dip into the market again for some more firepower as their squad depth remains thin.

Although their squad remains cohesive with sprinkles of star quality here and there, you can’t help but feel that Bournemouth will struggle to compete with the overall quality and in the Premier League. In spite of this, they do have a joker to play in the form of Callum Wilson who has bagged 22 and 23 goals respectively in his last two seasons. But even if he settles at this level, it’s hard to see how Bournemouth can survive against teams with so much more spending power. 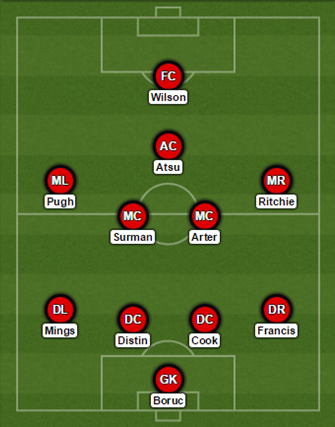 IAIN’S PREDICTION: 17th – The first half of the season is crucial, but we’ve seen so many times how Premier League stalwarts can take unfashionable upstarts lightly. If Bournemouth keep their heads, they might just make this.