Where next for Swansea then? They have escaped financial oblivion, they have scrambled out of the basement, they have climbed up the divisions, they have established themselves in the Premier League, they have won silverware and they have played in Europe. Last season brought their best Premier League finish, but it also brought a maturity of style. The Swans might once have been tippy-tappy idealists, but they’re much more balanced now. They can keep it tight, they can attack in numbers. They did not finish in eighth by accident.

Ordinarily, the biggest problem for an over-achieving manager is the management of expectations. But are Swansea actually over-achieving? Garry Monk is proving himself an excellent young manager and his squad have displayed a sense of professionalism and composure that has taken many by surprise. They did not wilt, as expected, when Wilfried Bony left for Manchester City. They did not clock off when safety was assured, but European qualification looked out of reach. After the transfer window closed in 2015, they won eight more Premier League games, more than both Tottenham and Southampton.

Thus far, they have managed to retain all of their key players and have added a few more to the roster, none more alluring than Andre Ayew. The son of Abedi Pele has been tracked by the likes of Arsenal and Manchester City in the past and, while they didn’t see enough to tempt them, he’s still an outstanding footballer. If they can keep hold of Bafetimbi Gomis, they’ll have some serious firepower.

In the last decade, Swansea have shown other fallen clubs that it is possible to rebuild without extraordinarily wealthy owners. Indeed, it is the steady rate of improvement at the club that has given it such a solid structure. When, under Michael Laudrup, standards slipped and the dressing room began to fill up with players who did not buy into the collective spirit of the club, Swansea wobbled. Monk’s first act was to restore and reinforce the values that had taken the club so far in the first place. It’s that common sense and solidity that makes you believe, while Swansea are unlikely to break into the top six, they’re just as unlikely to slip into the bottom six either.

And, of course, whatever happens this season they should be well supported on the road too, a product of the club’s admirable decision to subsidise all away tickets and to ensure that no fan pays more than £22 to watch their team. In more ways than one, Swansea are a glowing example to other football clubs. 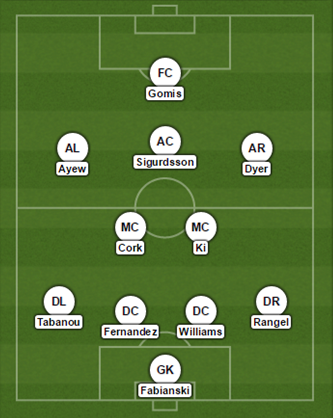 PHIL’S PREDICTION: 8th – I think after last season, the only way is up for Swansea. Garry Monk has done a fantastic job thus far, and isn’t showing any signs of looking back and admiring his work. The signing of Andre Ayew was an excellent one, especially when you consider the various other clubs who were after his signature. Franck Tabanou is equally as impressive, as well as Eder who will provide decent back up for Gomis up front. Mix these guys in with last year’s successful group, and I think Europa League is a more than realistic target.