Aston Villa are one of the biggest clubs in England. With seven First Division titles, seven FA Cups and one European Cup to their name, they should be up at the top and competing for European football every year. But they aren’t. After shooting up to second early on last season, their fans began to dream that things could be different. But dreams rarely linger and a miserable run of six straight defeats saw Villa drop to 15th. Normal service was resumed.

They were a tired side, lost for ideas and posing as much threat in front of goal as a kitten trapped in a ball of wool. Paul Lambert’s sacking came as no surprise. In came Tim Sherwood and things began to look up. Despite losing his first two games, Sherwood won five out of his last ten in the league, the same amount that Lambert managed to win in 25. Villa finished 17th, surviving relegation by the skin of their teeth. At least there was a welcome distraction for their fans with two trips to Wembley in a surprising FA Cup run, before losing to 4-0 to Arsenal in the final.

From the outside looking in, Villa’s prospects for next season look bleak yet again after the £32.5m departure of Christian Benteke to Liverpool and the £8m exit of club captain Fabian Delph to Manchester City after an extraordinary u-turn. However, with no plans to sit and sulk in the corner, Sherwood & Co dipped into their recently buffed wallets and signed both Idrissa Gueye and Jordan Amavi, who are extremely highly rated in France for a combined total of £18m. Their business across the channel wasn’t finished there, signing Jordan Ayew, brother of Andre, from FC Lorient for £8.5m. Micah Richards was also acquired on a free transfer, in addition to triggering their £2.5m option to buy in Scott Sinclair’s loan agreement from last term.

The obvious difference between having a good season or another battling the drop, is how they go about replacing the goals of Benteke. Having put 15 into the back of the net, the Belgian was responsible for 49% of Villa’s goals in the Premier League last season. Not to mention the fact that since his top flight debut in 2012, he (42) has only been outscored by Aguero (55), Suarez (53) and van Persie (44). Emmanuel Adebayor has been heavily linked, and while a transfer looks likely, his last two seasons at Spurs have been anything but convincing. Still with a fair amount of cash left in the kitty, Villa need to find a proven goalscorer and pounce quickly as they look to fill that big hole up front.

Despite becoming something of a laughing stock in certain quarters after his time at Spurs, Sherwood will want to prove that he is a manager capable of cutting it in the Premier League. After the departures of Benteke and Delph, a new era begins now for Aston Villa and this is a point he will be eager to reinforce. With some impressive business being completed already, matched with some interesting youth talents progressing through, their future could look a lot brighter than it seems. 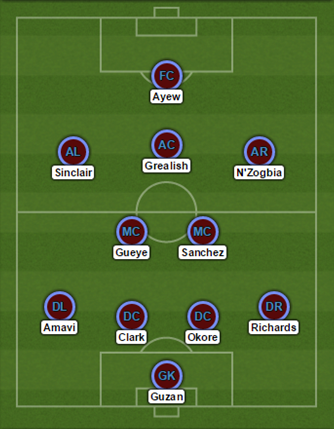 IAIN’S PREDICTION: 14th – Without Benteke and Delph, it’s a bit of a leap to suggest that Villa will suddenly power up the table, but the signings look good and Sherwood isn’t as silly as some people think. They should at least avoid a tense relegation battle this year.