They came with their millions and snatched them up, one by one. Luke Shaw? Sold. Adam Lallana? Sold. Rickie Lambert? Yep. Calum Chambers? Outta there. Dejan Lovren? Well, they probably owe Liverpool a thank you card for that one. After their excellent 2013/14 campaign, Southampton were picked apart like a corpse in vulture territory. In fact, many tipped them for relegation after this dramatic summer exodus. It’s fair to say that it didn’t quite work out like that. Quite the opposite, in fact.

Ronald Koeman’s Southampton were more than capable of mixing it with the big boys. Immense credit must go to the Dutchman for calmly going about his business during the summer window, bringing in Dusan Tadic, Graziano Pelle, Sadio Mane, Shane Long, Fraser Forster, Toby Alderweireld and Ryan Bertrand for a fraction of what half of his squad was sold for just a couple of weeks before.

With their high intensity style reminiscent of their days under former boss Mauricio Pochettino, they were blitzing teams away and managed to remain in the top three from September all the way through to December. It was like nothing had changed at St.Mary’s, and all involved were gaining deserved praise. Despite fizzling out towards the end of the season, they finished in a respectable seventh position.

They must be sick of the sight of Manchester United and Liverpool by now. A smaller scale repeat of last summer has happened again with both Morgan Schneiderlin off to Old Trafford for £25m and Nathaniel Clyne moving to Anfield for exactly half that. But of course, this is no big deal for ice cold Koeman who dusted himself off and strolled back into the transfer market once again. Deals for highly rated Malaga youngster Juanmi, Sporting Lisbon full back and Nathaniel Clyne replacement Cedric Soares, in addition to utility man Cuco Martina from FC Twente for a combined £10m provide some much needed depth to their squad. Without doubt, their capture of the brilliant Jordy Clasie for just £8m will be one of the bargains of the summer, who was actually Feyenoord captain under Koeman during his three year spell at the club.

The return of their 2012/13 top scorer Jay Rodriguez is another big boost, after being injured for over a year as a consequence of tearing his ACL away at Manchester City in 2014. The Saints now have a wealth of attacking options, which will only be useful as they look set for a long season both domestically and in Europe.

Nobody will be tipping Southampton for relegation this year, that’s for sure. Their last three Premier League finishes read 14th, 8th and 7th, and that is tangible progress. With the added bonus of Europa League football should they overcome Vitesse in qualifying, are they capable of going that one step further this year? Or will the Europa League chew them up and spit them out like it has done to so many before them? Will the losses of Clyne and Schneiderlin be too much for them to handle, or are they just another two departures? Will Graziano Pelle and his glorious side parting be able to put the team on his rather tall shoulders and fire Southampton to great heights? Those associated with the club certainly believe so, and they will relish the challenge of proving that to everybody who doesn’t.

POTENTIAL LINE-UP: (Southampton have since signed Steven Caulker on a season long loan, who will presumably replace Maya Yoshida in the back four). 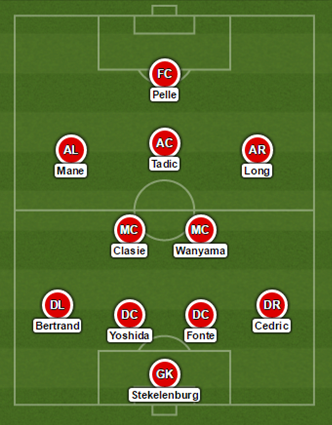