Watford. A club who take the term ‘managerial merry-go-round’ to a whole new level. Even when they were promoted, they still changed their manager. On October 7, 2014, Slavisa Jokanovic would be their fourth appointment in five weeks after Giuseppe Sannino, Oscar Garcia Junyent and Billy McKinlay all headed for the exit door. And he’s already gone. But despite the club’s boardroom resembling an episode of The Apprentice, Watford and Jokanovic got the job done and gained promotion to the Premier League.

At one stage, Watford looked like they might have blown it, but in fourth place with six games to go, they picked up 17 points from a possible 21 to finish second. In fact, they were only minutes away from winning the title, but conceded an injury-time equaliser at home to Sheffield Wednesday that allowed Bournemouth to overtake them.

They owe much of last season’s success to Matej Vydra, Odion Ighalo and Troy Deeney who scored 57 goals between them in the Championship, considerably more than half of the 91 goals they scored in total. Sizeable contributions also came from Almen Abdi and Adlene Guedioura in midfield, while Gabriele Angella was an imposing figure at centre half.

After falling out with Jokanovic, they appointed Quique Sanchez Flores as their new boss at the start of the summer and have been one of the most pro-active Premier League sides in the transfer market, making nine signings. They’ve spent a club record £5.5m fee on Etienne Capoue, in addition to £3.5m on Valon Behrami and £5m on Jose Manuel Jurado to bring strength, experience and flair to their midfield. The £1.5m signing of Greek international Jose Holebas from Roma will provide great pace and width down their left hand side. They have also dipped into the free agents, picking up defenders Sebastian Prodl, Allan Nyom and Miguel Britos who will shore up their back four considerably.

Despite the ambitious strengthening of their squad, doubts always linger around the newly promoted sides and their chances of survival. Watford clearly have a plethora of attacking threats in their ranks, but will they be able to create chances consistently in the Premier League? Not only this, but as the likes of Tottenham, Liverpool and Hull have brilliantly demonstrated to us of late, buying a multitude of different players in one window and expecting them to mesh instantly is not as easy as it seems.

On the plus side, they have a talented manager in Flores and players coming in to the squad who will have a point to prove about their abilities to play at the top level. Most people think they’ll go straight back down again, but this could benefit them greatly, easing the pressure as they seek to retain their top flight status next season. 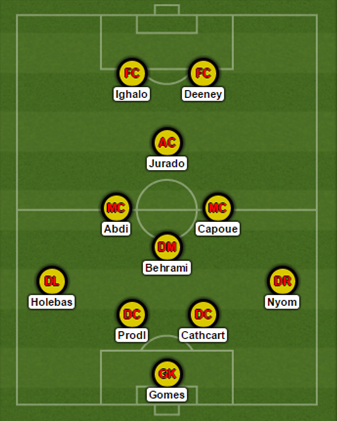