IAIN: As if these twats are going to get anything against Juventus now. After drawing with Middlesbrough. I can’t even look at them. If I could make them get changed in the street, I would. They don’t deserve privacy. They don’t deserve dignity. They don’t even deserve clean socks. These cowards. These animals. These men of smegma. I am cheapened by my association with them. A three year contract, was it? What the hell was I thinking? 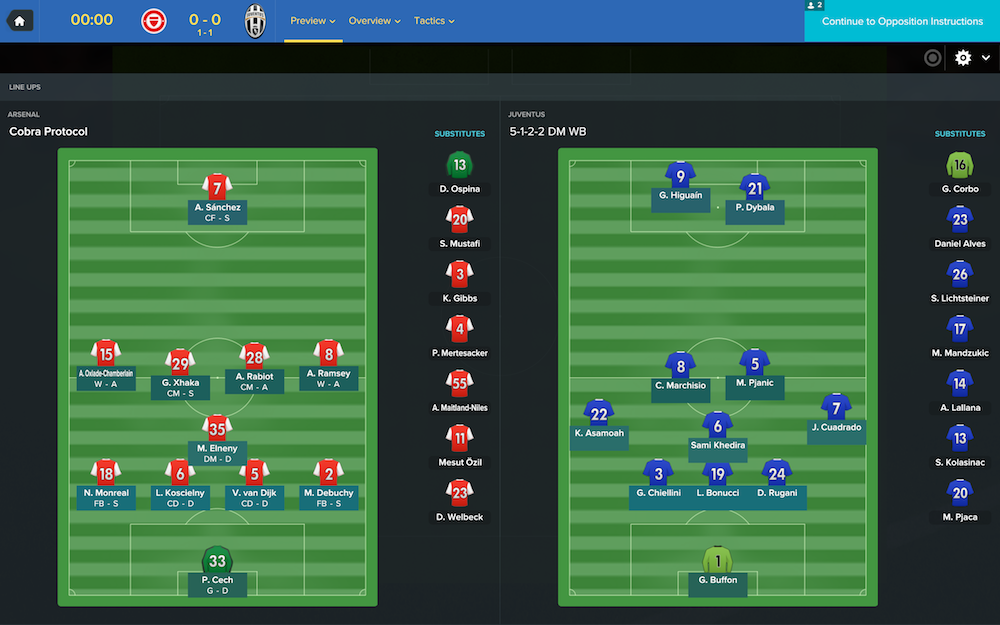 Extraordinary. It’s like one of those bad war films where the hero keeps taking bullets, but keeps striding on, detonator in hand, finger on the button until finally his mission is complete and he slumps lifelessly to the sand.

We lost Sanchez to injury. We lost Rabiot to injury. Those that remained were exhausted. But Granit Xhaka slammed home a first half goal and we successfully protected our lead until the end. It was like a completely different team out there. I will never understand this lot. Never. But we’re in the last four of the Champions League. Against Bayern Munich, predictably enough. But, hey, we’ve played them twice and they haven’t beaten us yet. 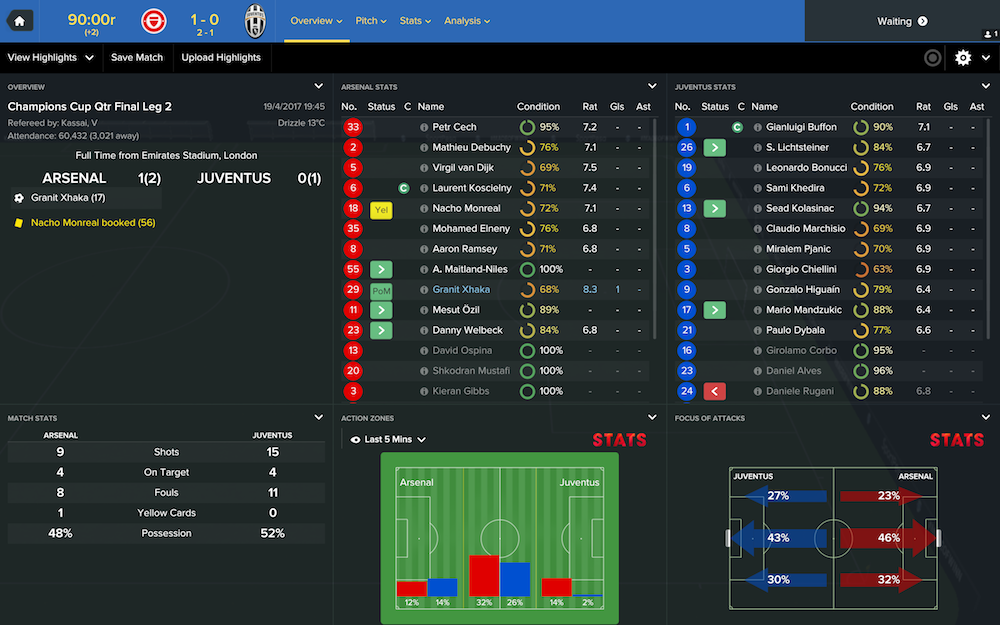 IAIN: Despite the injuries, I think we should dare to be bold again. It’s Burnley at home, they’re 19th, they shouldn’t be a threat. If we can just get our noses ahead early, we can close it all down later and conserve strength. Let’s hope so anyway. Alex appears to have figured out how to win again and Manchester United are still pushing for a top four place. Cock this up and we could still finish fifth. 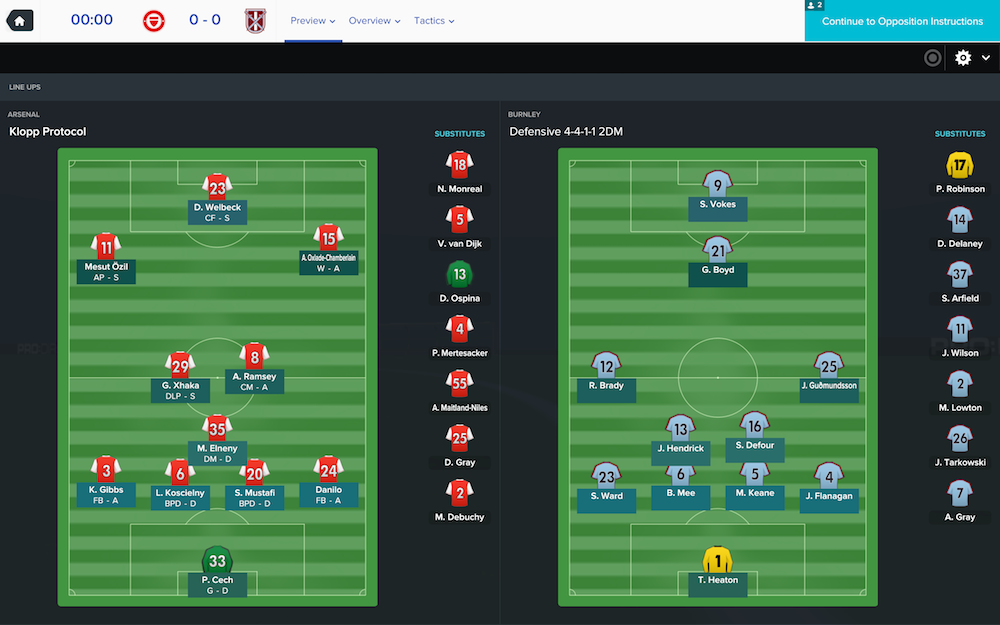 The mission to restore Aaron Ramsey to the team is a success and he seems determined to make up for lost time. He absolutely storms this game, snapping into tackles and driving forward like an eager debutant. He scores the first, another fine finish, but he’s everywhere for the rest of the game. Poor Burnley haven’t got a hope.

Before the half hour, Danny Welbeck scores his first goal of the season to make it 2-0 and that’s the way it stays. Burnley never move out of their defensive shape and they’re kind enough to have Jeff Hendrick sent off with ten minutes to go, just to remove any possibility of a late shock. We needed that. 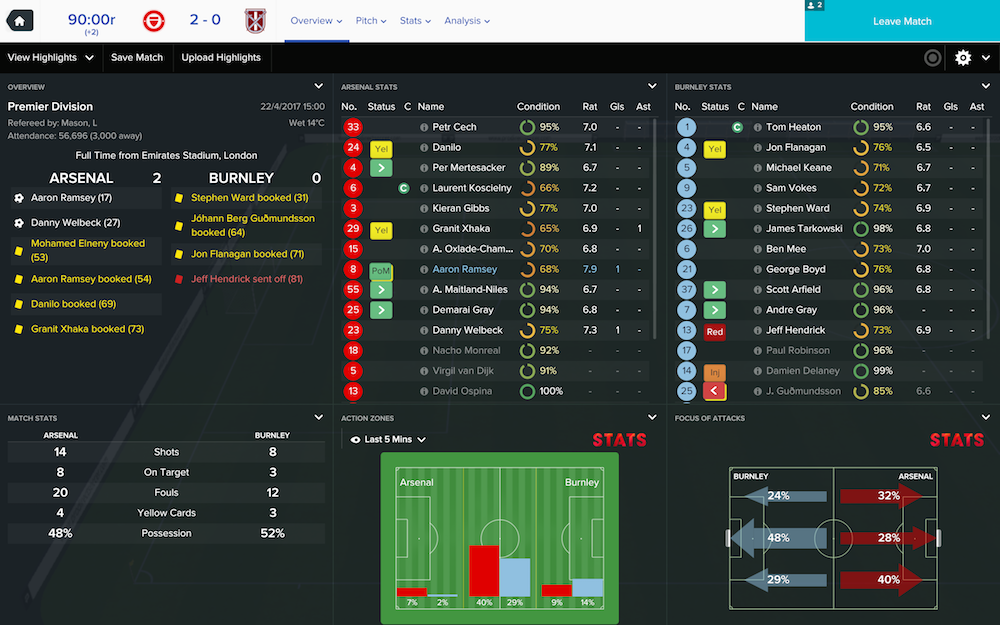 ALEX: I learn that Iain has secured a Champions League semi-final spot. I am delighted, rooting for him, because every step further he takes in that competition is a chance for him to pick up more injuries and exhaust his players.

Stoke, away. We go back to the more conservative (small c, lads – absolute boy) midfield three of a box-to-box, ball-winner, and DLP. The front three is Firmino, Mane, and Coutinho, and the midfield Can, Milner, and Henderson. Moreno is back, too. I keep Laidler on the bench and bring Ejaria out of the U23s into the matchday squad, largely for the fun of it. Woodburn is on loan somewhere, otherwise he’d be there too. 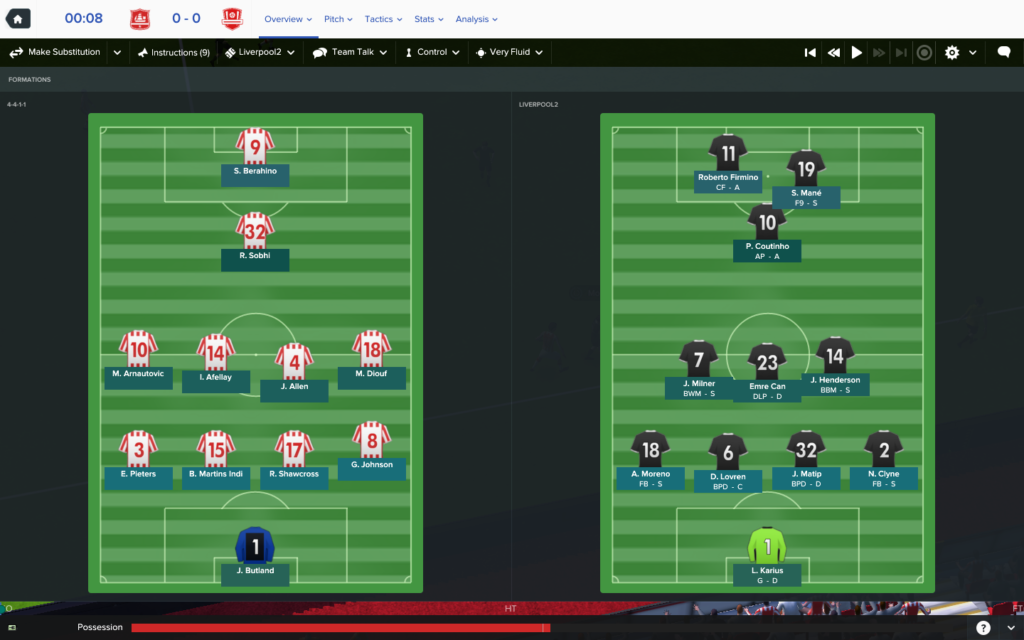 We go 1-0 down to a Berahino near-poster from a pulled back cross and I nearly punch the wall. Mane equalises after Milner wins back possession and then scores a peach of a second from the edge of the box to take the lead. Berahino then pulls one back, another of those you-can-see-it-coming-a-mile-off goals, before that man Laidler (I say man, I mean strapping manchild) nets his second in two from the bench to give us a 3-2 win.

Whoop. It’s a mute whoop, though, because while we are in fourth now, United have a game in hand. Still, we are doing what we can to keep up after that awful run back in January through March. It won’t be enough to snatch that unlikeliest of title wins, promising though it looked for a while, but we can still finish in the top four. 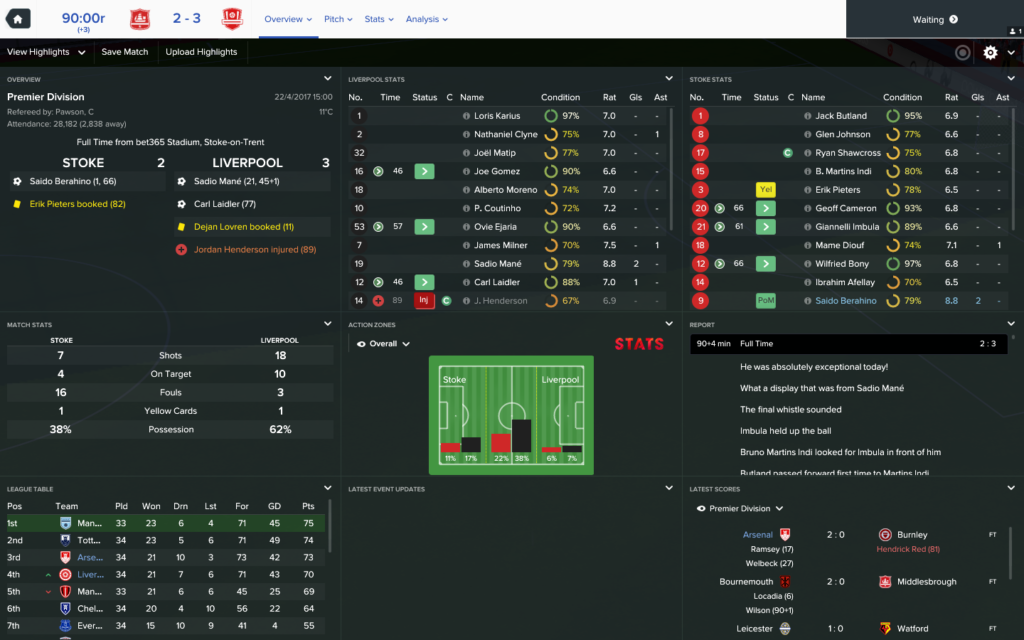 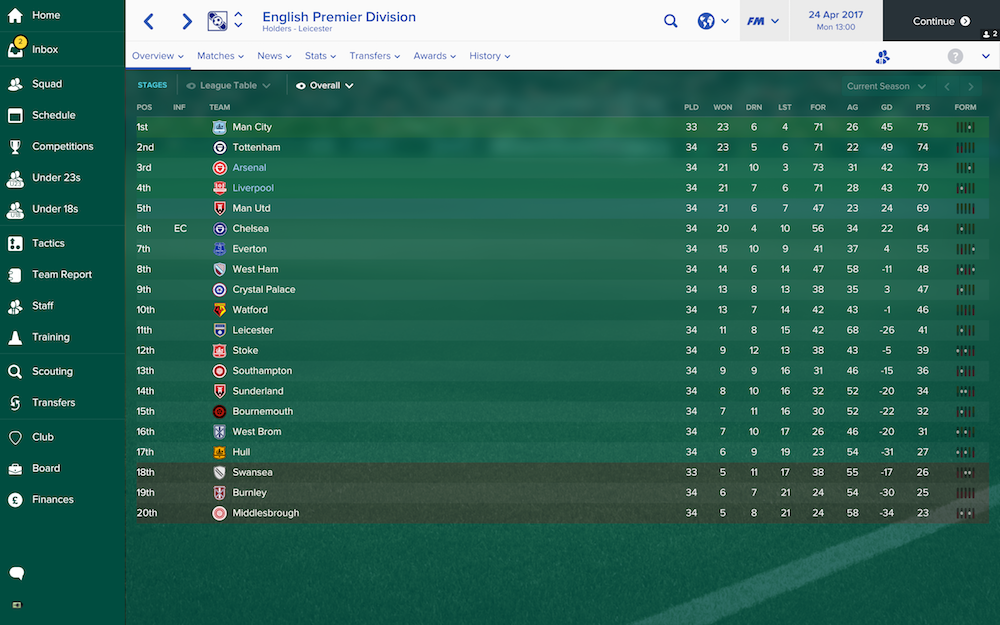 IAIN: Players are streaming back from injury now. Indeed, we’re just one Cazorla away from full strength. West Ham away is a tricky game, not one to be taken lightly. We’ve got some massive matches in May, but there’s no point tossing April away in a misplaced display of arrogance. We’ll go full pelt on these fuckers. I want it put to bed. I don’t usually play Klopp Protocol away from home but I think it’s the best way here.

But preparations are disrupted two days before the game as Petr Cech is injured for a week. That’s not helpful. We’re asking a lot of David Ospina. I can’t even recall the last time he played. 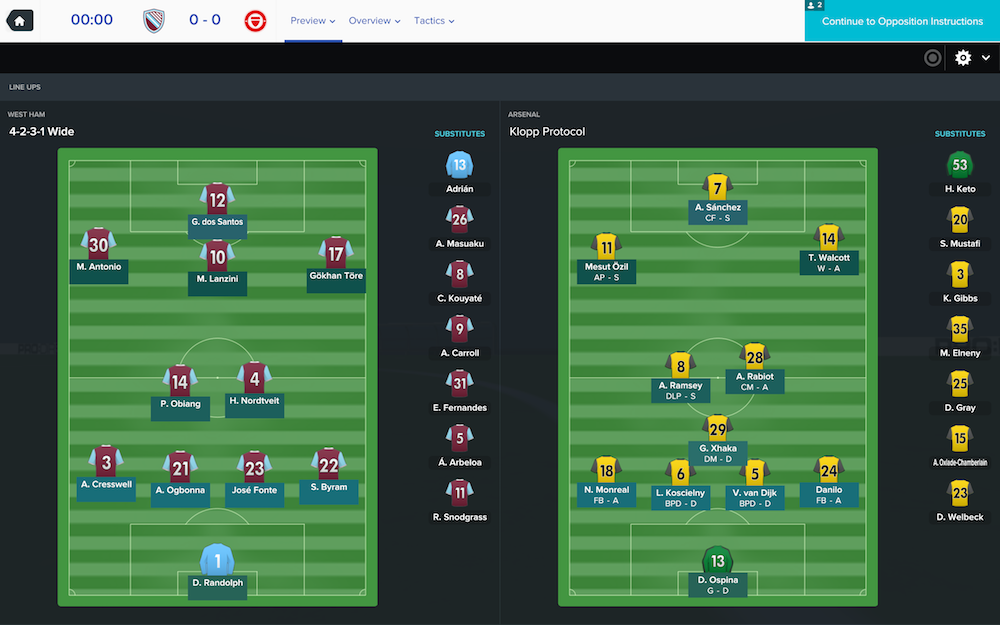 I just…Arsenal, man. Arsenal. I get the feeling I could be here for years and never change their innate Arsenalness. We started brightly. Mesut Ozil was twice spotted tackling back. Walcott had an early effort that just went wide. I felt good about it. And then West Ham scored from a corner, a howitzer from the edge of the box from Manuel Lanzini. And we went to pieces.

We couldn’t keep them out. David Ospina, bless him, saved a penalty from Aaron Cresswell before half time, but they were racking up so many chances. I switched to Cobra, in the hope that we could keep them at bay. It stemmed the flow of chances, but it wasn’t until I became increasingly desperate and went to an old fashioned 4-4-2 that we snatched an entirely undeserved equaliser through Oxlade Chamberlain. That seemed to sort us out, we looked more competent, but then Walcott went down injured again and a black cloud settled over us.

Welbeck dawdled with the ball in possession and was robbed. West Ham broke clear on goal with space to run into. I don’t blame Danilo for what he did next. He did what he had to do. He went through his man like a demolition ball and didn’t even wait for the red card. With seven minutes to go, I had to shut it down and accept the draw. But then in injury time, fate threw me a lifeline.

It was never a penalty. I don’t know what the referee saw, but there was nothing going on. But in the 94th minute of a season-defining London derby, you don’t ask questions. Alexis Sanchez stepped up. Alexis Sanchez with 34 goals to his name already this season.

He kicked it straight at Adrian. 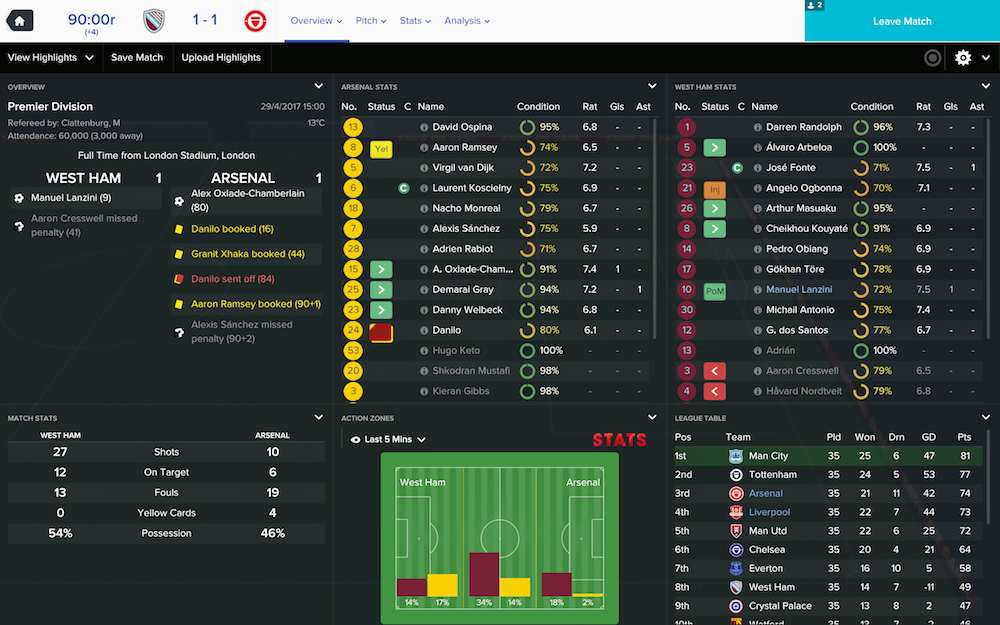 ALEX: I now have Kovalenko, Henderson, and Nastasic injured, and Wijnaldum is hit with a further two match ban. I appeal, but no dice. However, West Brom beat United to rob them of their game-in-hand advantage: Garry Monk, I could kiss you on the mouth (Pulis obviously got fired at some point).

Our next match is against Hull, who have sacked Silva and now have Bobby Di Matteo at the helm. With Matip now out, in addition to the others listed above, I bring in Grujic and Gomez but we are otherwise as normal. Or as normal as you can be with a significant number of players banned or on crutches. 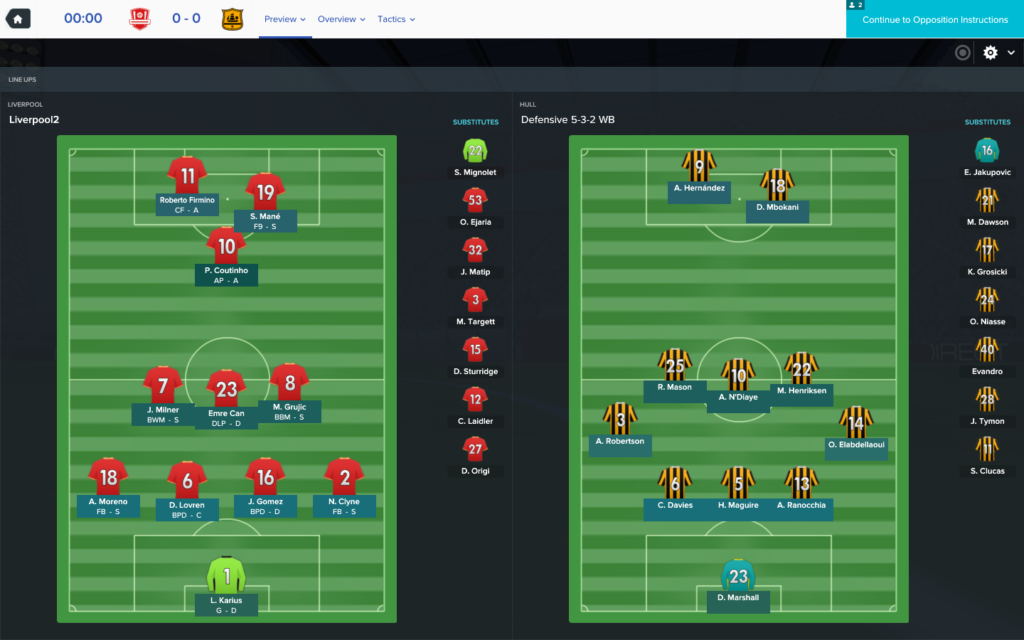 Oh good Lord, I cannot take such games. We start fairly comfortably and take a 1-0 lead from a nice attacking move. Then the wheels start to come off. Gomez, already booked, gets injured and I have no central defensive cover; back drops Can, and on comes Ejaria. Milner then goes down, and I have to bring on Targett and switch to a 4-4-1-1 with Mane wide right and Moreno wide left.

So far, so OK, but Dejan Lovren gets it into his thick skull to scythe down some poor, unsuspecting Tiger with 15 minutes to go. I finish with a back four of Targett, Moreno, Can, and Clyne, and a midfield of Firmino, Grujic, Ejaria, and Mane, with Laidler up front alone. Somehow, we cling on. We also put Hull into the relegation zone, for which I am sorry, because everyone loves Bobby. We are fourth, one point behind Iain – who, I gather from various swears and shouts, slipped up a little against the Hammers – and two points behind Spurs.

With three games left, the title is still a mathematical possibility, but as close to impossible as possible gets. I need to finish above Iain and, ideally, squeeze up into second. I could do with some Lazarus-like action from my squad though, with three key players injured and two suspended. This. Fucking. Game. 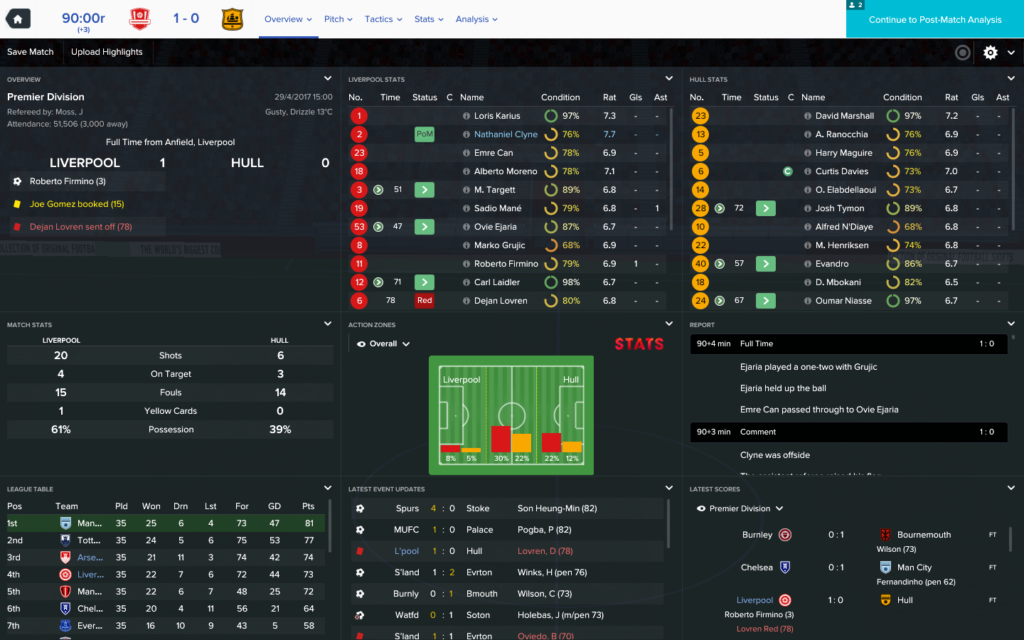