Can you imagine walking into the Brazil dressing room after their 7-1 World Cup semi-final gubbing and telling them they need to play Germany again?

After receiving the most humiliating of home defeats in 2014, the Seleção would probably have been anywhere other than risking further embarrassment just days later. Thankfully for them, nobody really watches the third- and fourth-place play-off anyway.

Sadly for Tromsgodset Pieces, there’s a semi-final second leg coming up against BC and after a 5-0 thrashing in the first match, the chances of redemption seem slim. Really slim.

In truth, it was probably always going to end this way. Aiming to limit damage as we came up short against one of the better sides (and managers) in this competition. But, for a while, I believed it’d be different.

This is the sort of situation that, as a child, you’d desperately try to shirk. You’d sit next to the radiator, trying to absorb every last bit of warmth to prove you’ve got a temperature, while putting on your best ill voice.

Your mum would always see through it though and send you off, telling you it was ‘character building’ or some other bollocks to make you feel as though what you were about to do was some sort of rite of passage to adulthood.

What you don’t realise is that, when you’re older, character building is replaced by people telling you to ‘learn to say no’ or to stop doing things ‘that don’t give you joy’. The mantras making us all feel good about throwing the towel in.

I’ve still got to play this second leg, though. I even decide to make a tactical change for it, in hope that we might at least lay a glove on Chelsea’s Ben Cole in the second leg.

I move back to the trusty 4-3-2-1 and attempt to merge the best – and I use that term loosely – of my previous approach with a new, improved system based on the one that got me off to such an abject start in the TSP Conference league season.

Can you see my logic here? No, neither can I.

It’s tantamount to giving fabled useless invention, the chocolate teapot, to Mr Bean and asking him to improve the design with his brilliant mind. Alas, that’s what I do as I try to create a fast, counter-attacking side with a firmer base out of the weathered, demoralised parts of my squad.

I’m focusing more play down the wings – rather than just over the top – so my forward three of Tammy Abraham, Marco Asensio and Mo Salah can wreak havoc. The wingers are in more advanced positions than previously and with only one out-and-out striker up front, I bring in a number 10 to provide some support in deeper positions. I lump for Harry Kane in this role, even though he’s not a natural in this position but because he’s a born finisher and can threaten from distance too.

My options are thin elsewhere, so I swap my left backs around again. This time it’s Marvin Plattenhardt’s turn, while I opt for Francis Coquelin alongside Jordan Henderson at the base of my midfield to provide protection for my four attackers. 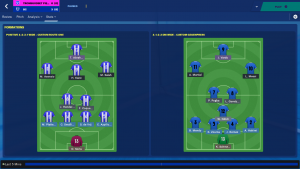 Despite the changes, the likeliness of recovering five goals is small. When we fail to clear our lines and allow Anthony Martial the room to cross for Jamie Vardy in our six-yard box, the mountain we’re climbing gets larger. The Leicester striker nips ahead of Chris Smalling to head home – it’s 1-0 to BC and they now have a six-goal lead on aggregate.

We’re not doing too badly, albeit that BC have the lead and are creating more chances. But any illusion that we’re really competing is shattered on 27 minutes when Cole makes a double switch, taking off full backs Achraf Hakimi and Benjamin Mendy for second stringers Cédric and Jamal Lewis. I race to the edge of my technical area and ask Cole if he’s genuinely resting players already. He simply tells me, with a smile on his face, that the away goal means he can rest easy. Cheers, mate.

We’re showing no signs of launching any sort of comeback as half-time arrives and now needing seven unanswered goals (yep, it’s got that ridiculous) in the second half to progress, I decide I just want to see action. So I go more attacking and bring on Federico Valverde for Coquelin to add a deep-lying playmaker to the mix.

We’ve known each other long enough by now to realise this isn’t going to work, even if Cole has decided to use his last substitution to bring off Lionel Messi and replace him with Adama Traoré. Meanwhile, my new attacking philosophy musters its first shot after 17 minutes, but it wasn’t noteworthy enough to earn a highlight.

Gerard Deulofeu comes on for Abraham and moves Kane up top. The England striker promptly hits the post, then forlornly watches on as Vardy heads in another as BC attack down the other end. It’s just so predictable now.

I’m not going to waste your time to explain what happens next in any length. I make some chances, fail to score and concede yet another goal before time is out when Paul Pogba drives a third home. It’s 8-0 on aggregate.

The full-time stats suggest it’s been a relatively even contest. It’s not fooling me: I know, we all know. Maybe Football Manager isn’t for me, after all. 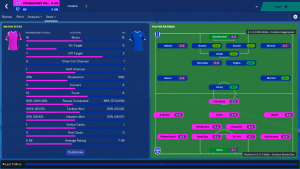 The only small consolation I could take after my first-leg defeat was that the other semi final was hardly a close affair. And while I don’t ever want to wish ill on anybody else, I was quite glad to think I wasn’t the only one being outclassed at this stage of the competition.

If that attitude doesn’t make me selfish enough, then karma had a way of biting me back as Flaymond FC launched a comeback in the second game. After getting the late away-goal in the first leg to reduce the deficit to 4-1, Luis Suarez’s opener soon had Konstantyn Garbar dreaming of success.

That lead was added to by Thomas Lemar’s second-half strike and as they went on search for the all-important third, AJCFC hung on to progress to the final against BC.

The final play-off matches will be published on The Set Pieces from the week commencing 13 July, so make sure you’ve caught up with all the episodes of our FM20 Project: The Coaches as the competition comes to a close.