But with only three fixtures left, I’m right in the fight to qualify for a top-four spot and reach the final play off.

My upturn in form has propelled me up the table and while I’ve played a game more than most of my rivals, I’m sitting just inside the qualification zone to reach the finals. But it’s incredibly tight.

The top two berths appear to be pretty much guaranteed, with Bolton coach Adam Cooper’s AJCFC and Ben Cole, manager of BC in the competition and on Chelsea’s books in real life, stretching ahead. 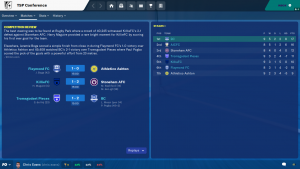 Yet whoever else will qualify is anybody’s guess. My next opponents, Stoneham AFC, hold the third position, but as boss James Phillips (English football’s former youngest-ever manager) has suffered intermittent technical issues since mid-way through the competition, he’s been forced to pull out of the competition.

This means that fifth place could now be enough to qualify for the final showdown and when you consider the inconsistent form most of the teams have endured throughout, that’s good news for the rest of us.

With AJCFC up next after facing Stoneham, I’m sure I’ll need something from this game to give myself a chance of qualifying.

In the spirit of Fergie’s description of the end-of-season pressures, my chair lets out a loud creak as I sit down. I’ll have to speak to the groundsman about that.

For this crunch match against Stoneham, I intend to remain with the tried and tested. We may have lost 2-1 to BC in the last game, but for the first half hour we played well. And we only lost by one. And we won away with this system before that. And… OK, I’m trying to justify my laziness to tweak my tactics for the fourth game running.

I’ve always been a big believer in Football Manager rewarding tactical consistency though. So my enforced swap to bring Junior back in at left back instead of the suspended Marvin Plattenhardt irks me. My decision to bring in Federico Valverde again for Francis Coquelin is just because the Frenchman’s performances irk me. 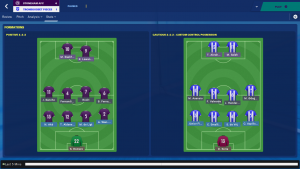 I’d happily take a point, so I’m delighted when the first half seemingly flies by. We don’t create much, but neither do Stoneham, with their only real opening seeing Jadon Sancho’s effort from a tight angle go behind after striking the outside of the post.

The match is following the pattern of my more successful outings. We’re dealing with attacks with relative ease, blocking shots and heading away crosses – keeping Stoneham at bay. However, the weakness of this plan is the one time we don’t get in the way, which is exactly what happens when Bruno Fernandes’s corner is met by a Robert Lewandowski header.

It’s not without mention that the Pole’s header bounces into the near post. A location I’d vacated when setting my corner strategy earlier in the competition in order to pack out the middle of the box. It’s fair to say Junior’s hands-on-hips expression is one that either says something about my tactics or simply his ambivalence about actually defending.

Junior lost his place in the side to Plattenhardt earlier in the competition because of our vulnerability down the left when he played. And when Fernandes fires in a second minutes later, once more from the left side of our defence – admittedly, Junior wasn’t anywhere near the Portuguese – I’m starting to use the full back as a scapegoat again.

We’re now being completely overrun as we fold so easily after conceding. Belief seems to be brittle, despite our recent good run, and the margins between us going 1-0 down and ending up completely dead and buried are all too fine.

Just as against BC in the last game, we’re dealt another blow in stoppage time for the first half. Another attack down the left sees a cross come into the box and when Marcus Rashford cushions a header back to Rodri, the defensive midfielder wallops the ball beyond David Soria for 3-0. Shit. 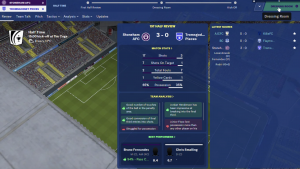 It’s just like the old days again and it’s clear I need to make a change, so after bringing on Gerard Deulofeu for Marco Asensio (this must be my most-used substitution) I decide it’s time to go more attacking. This might seem naïve, but the beauty of suffering such a six-goal defeat back on the opening day means my goal difference is a lost cause anyway, so I might as well gamble.

Suddenly, Deulofeu breaks forward with the ball deep in our half and just runs. He jinks past one and makes a beeline for the penalty area and just as he’s about to pull the trigger, Fernandes slides in to nick the ball. But it rolls straight into Mo Salah’s path who unselfishly squares to Tammy Abraham, who fires low into the goal. It’s 3-1, come on!

I’m starting to get excited as we begin pushing Stoneham back. Deulofeu is once more the catalyst as he terrorises Aaron Wan-Bissaka down the left and when he jinks into the box again and unleashes a shot that beats Sergio Romero, I’m about to explode with excitement, only for the ball to come back off the inside of the post and bounce across the line.

While it seems to me that I’m about to witness my Rafa Benitez moment and turn around a three-goal half-time deficit, Football Manager promptly teaches me yet another life lesson. A 50-yard pass from Fernandes completely carves open my defence, with Lewandowski – a man not renowned for his pace – yards ahead of, you guessed it, Junior and fires a weak shot that simply goes through David Soria and into the net. It’s 4-1.

My balloon is well and truly punctured, and with Killie FC and Flaymond currently on track to get points away at AJCFC and BC respectively, things are looking bleak.

I throw on Harry Kane and, er, Calum Chambers to inspire what would be the most incredible of comebacks. Although my efforts are largely futile, the game is over.

The only good news I can take is that my updates bar tells me that two Romelu Lukaku goals have beaten Killie FC, while Flaymond have also slipped to a late defeat against BC. Somehow, we remain in fourth, a point above them both.

I’m not convinced that when Ferguson said the business end of the season was a time for squeaky bums, he meant clinging on for dear life and hoping that everybody continues to lose. But that’s my interpretation of the situation and I’m not letting go any time soon. 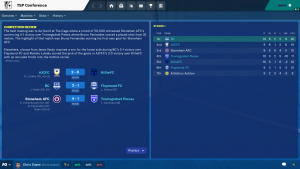