I’m starting to wonder if Dennis Bergkamp had the right idea by avoiding away matches. OK, so the Non-Flying Dutchman only refused to travel to matches he had to board a plane for, but it’s a concept I’m warming to.

I don’t have a fear of flying, but my team definitely has a phobia of playing away so far. Three matches, three defeats and no goals.

If a four-match unbeaten run at home has given me a glint of hope that I can still make the top four and a final play-off place, then my wretched away days are the doomsayers.

That needs to change if I’m going to stand a chance of qualifying, so my next fixture against Athletico Ashton is a true test of the Brexit tactic I’ve adopted.

Although I won using it last time out, it’s not yet clear how much of an impact the approach had given my decent home record already. This is the true test.

My only nagging concern, while trying to sidestep getting political, is that Brexit is all about national pride and the spirit of independence but very much grounded within our home nations. Does Brexit travel well? Maybe I’m reading too much into it.

Earlier in the campaign, I drew 2-2 with Luke Hurst’s Athletico Ashton side. And the West Ham coach was the last to lose his unbeaten record in the entire competition, albeit with a series of draws. Come to think about it, I’d happily take a draw.

It’s quite possible Hurst would too, having lost his last two to slip to fourth place, only one point and one place above me. This is the sort of game that defines seasons. Lose and he’s almost out of sight, win and I suddenly look like a genuine challenger.

Following last week’s win, I have the simplest of decisions to make for my team this time around. There will be no changes to the tactics and my personnel swaps are triggered by suspension. Chris Smalling is out so I recall Gabriel, while Jordan Henderson’s return from a one-match ban means Francis Coquelin drops to the bench.

Principally, if we pose more of a threat than in previous away trips, this will be a success. So Martin Odegaard’s tame effort in the opening minute, while hardly noteworthy under normal circumstances, was reason to feel positive. 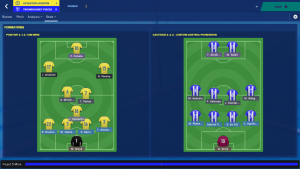 It does prove to be our only meaningful foray forward, though. Athletico are having most of the ball but aren’t creating too much either. That is until Ricardo Pereira whips in a cross from the right that picks out Jack Grealish at the back post, with the midfielder managing to beat both César Azpilicueta and Stefan de Vrij to head against the bar, with the rebound dropping to Paulo Dybala to tap into an empty net. We’ve all seen this story before.

But instead of buckling and letting our heads drop, as usually happens when we concede away from home, we show some fight. Valverde and Henderson combine on the edge of the box and pick out Marvin Plattenhardt, who whips in a delicious cross for Mo Salah to head past Miguel Ángel Moyá… and against the post.

As the half wears on, Marco Asensio releases Tammy Abraham with a perfectly weighted through ball, but Moya pushes his strike away, before Plattenhardt delivers another exquisite centre to pick out Odegaard who heads home. GOAL! 1-1!

Immediately from the restart, Athletico are passing across their backline when Stefan Savic misplaces the ball right into Salah’s path. I can barely believe my eyes as the Egyptian races on to it, drives towards the box and places beyond Moya for 2-1. I can’t contain my delight, this is incredible.

Half-time arrives with our lead intact. We’ve had 12 shots, six on target, and I’m pretty certain that’s about as many as I’ve managed in all of our three previous away games combined.

Changes are surely on the way from Athletico, but all I do is pour praise on my charges. If we can survive the early onslaught, I’ll be feeling confident and I don’t want us to stop posing problems by dropping deeper. Instead of making tactical tweaks, I spend the break bouncing around like a child who’s eaten too many cola bottles as I struggle to control my pent-up energy.

Without Smalling in our backline, we continue to look vulnerable in the air. Matija Nastasic is the closest to testing that when he heads a corner against the bar, but we reply with another Abraham effort that is tipped on to the post by Moya.

Despite surviving only rare scares, I’m uncomfortable with how open things are as we enter the final 20 minutes. I don’t want to change our shape, but we’ve definitely been second best this half, so I introduce Coquelin and Gerard Deulofeu to give us fresher legs. The Frenchman has greater defensive qualities, so I set him to pressing Hurst’s most creative players – Thomas Partey and Sergej Milinkovic-Savic – in an attempt to break up the most dangerous attacks.

We’re still under the cosh when Azpilicueta steals the ball on the edge of our box and plays a quick, direct pass to Salah, who jinks past three players to get to the byline, then forces an effort into the centre, where Henderson pokes home. GOAL FOR TROMSGODSET PIECES! 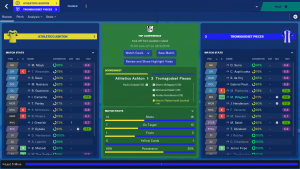 It’s at this point that I realise it’s really going to happen. Bloody Brexit is going to deliver again. I start to wonder why I’d ever tried to be clever with my tactics and not just gone old school from the start.

We see out the rest of the match without too many dramas to take a 3-1 win. As I check the other results, I can see that we’ve jumped up to third in the league, having taken 10 points from a possible 15.

If we keep this up, this surely has to rank as one of the greatest underdog stories ever told. I know that sounds like a huge overreaction, but I genuinely mean it. In my head, after spending too much time worrying about how I’d get out of the mess I’d left myself in, this is sensational. How we’ve managed to turn this ailing, under-strength team into challengers is beyond me.

What’s next could be even more incredible…

“I’m top of the table and doing well. I think the system and initial recruitment of players to fit into the system have allowed for success, though weaknesses have shown up when the starting 11 had injuries and suspensions.

“Although we still aren’t dominating possession in the way I’d like, we seem to be efficient in attack and are keeping clean sheets at the back, which allows us to dominate both boxes and win matches.

“The switch to a more counter-attacking approach away from home has seemingly unlocked the ability to pick up a few more vital points as well. There’s a few set-piece routines yet to pay off as well, so keep an eye out for them.

“There’s still a fair way to go and we must now switch focus to make sure we can finish off in top spot and set our sights on preparing for the potential challenges ahead in the semi-finals and, ultimately, the final.” 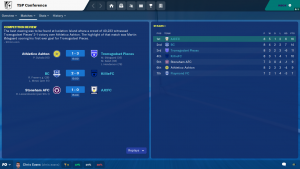