I take an instant dislike to the guy on the other end of the phone.

“Your team is so strange. How is your squad so… bad?” the voice asks as I laugh off how hopeless my draft picks are. The gall of it, really.

My finger temporarily hovers above my screen weighing up if I should just cut the call short to stop the criticism there and then.

But it’s not what I really want. And I’m not really offended. In fact, the chap on the other end of the phone, Rob Roberts-Facey, seems like a good guy.

The truth is, he’s not saying anything I don’t know already. Or anything someone hasn’t already told me on Twitter.

I need Rob’s honesty, so I encourage it. He was one of several FM20 experts who got in touch when you put a call out to our social followers to take part in a special episode.

You see, with an empty game week and some questionable results in the first half of my campaign, I decide my best chance of turning things around is to learn from others more successful than me.

I picked up that nugget of motivational wisdom after spending a few minutes browsing LinkedIn. And, if it’s good enough for Rita in accounts to get to where she is at her middleweight IT company, then I’m sure as hell going to give it a go.

Rob got the nod to help after impressing me with the sheer number of hours he’d clocked up on the game and his role as QPR’s representative in the EFL’s FM20 Cup, only losing to eventual winners Brentford.

🚀 The goal
🙌 The celebration
😂 The relief@robfacey and #QPR safely through to Round 2️⃣! pic.twitter.com/xZqByylgWB

He’s under strict instructions not to give me any direct guidance of how to fix my team, but it doesn’t stop him passing comment.

It turns out he doesn’t think he’d have picked most of my squad, with the exceptions of Mo Salah and Harry Kane. And while he’s impressed that I had the forethought to bring in a host of highly rated youngsters that will “good for a proper save” rather than a short-term competition, the error of my ways are clear.

Throw in the comparative strength of the opposition and he’s sympathetic for the job I’ve left myself with following a questionable draft. He doesn’t say it in as many words, but there’s a general feeling that I’m master of my own downfall.

Thankfully, Rob has managed several poor teams in the past and has a secret weapon up his sleeve.

“It’s Brexit,” Rob announces as I begin to wonder if I’ve heard him correctly. “It’s the name of a tactic I have saved for whenever I play in the lower leagues or a team that’s not as good as the opposition.

“It’s very old school, no mucking about and would appeal to a certain demographic. It’s not the most forward-thinking way to play, especially when there are so many options but, for whatever reason, it works on the game.”

The essence of the plan is a 4-4-2 formation that allows you to get behind the ball and make it as difficult for the opposition to get near your goal when you’re not in possession. Then when you do win it back, exploit every ounce of pace within your team to break quickly – kicking it quickly into space for your two, ideally rapid, frontmen to run on to, with the rest of the team charging in behind them. It’s essentially how Leicester won the Premier League.

“If you’re going to play defensive, counter-attacking football, you need to look at pace above everything else,” Rob explains. With the likes of Salah, Gerard Deulofeu and Marco Asensio in Tromsgodset Pieces’ squad, this is something that could work for me.

“In the transition, you need to regroup when possession has been lost. When it has been won, you need to counter. When I’ve been lazy on games and left the default tactic as counter-press, I find I lose so many more matches. When you haven’t got the ball, you need to be very boring, really functional and agricultural, then distribute it quickly over the opposition defence when you get it back.” 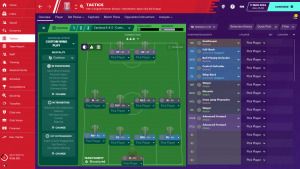 Rob tells me that his Brexit tactic has helped him transform Notts County from a fifth-tier side to Premier League champions on FM20 and he’s been able to adapt it to be a little more expansive as he’s developed his squad.

When Brexit has failed (I mean, could it ever?), Rob says he has another formation to fall back on. Again, he keeps it relatively simple – “there’s lots of good memes at the moment showing someone trying to force a 3-1-2-1-2 on a Romanian Second Division and failing” – with a straightforward wing-back system.

“This way you can play two up top to pose more of a problem, while still having numbers at the back,” he says.

“Broadly, I’d have three at the back, four in front of them, two up front and flexibility to decide if you you want to play a number 10 or two holding midfielders. Again, it’s about stifling your opposition, pace and not over-complicating things.”

This is one of the biggest issues I’ve had playing on more recent Football Manager games. One of the series’ strengths is its realism and attention to detail, however that means recent editions have seen an increase in player roles, toggles and terms that I’m not too confident using. Maybe I’m exactly the person the Brexit tactic is for.

Rob concedes he’d never have heard of – or understood – a mezzala or trequartista it wasn’t for Football Manager and has developed his own preferences for positions and roles.

“If I do a midfield three and it’s flat in the middle of the pitch, I hate it so much and it just seems to never, ever work – it might just be me,” he adds.

“I don’t like playing with a number 10, though. Again it never seems to work for me and I prefer a deep-lying playmaker than an attacking playmaker for the same reason. If you set them to support, I find that’s more effective too. An underused role that’s been added in recent years is the mezzala, which is brilliant.”

So how flexible is Rob when it comes to finding the right player in fit in all these roles?

As someone who desperately tries to make his formation show as many green roles as possible, this is music to my ears.

But with all this information spinning around in my mind, I need to work out how I can apply some of Rob’s advice to my team. Balance has been my big issue in this FM Project so far as I blindly wield from one approach to the next. And it hasn’t served me well.

As if to prove that point, the results from the three matches containing only the coaches has seen me slip to the bottom of the table. That brings up the half-way point of the campaign, so I need a big turnaround in the next few games to stand any chance of making the final four.

But as Brexit has shown once already, the unexpected can happen. 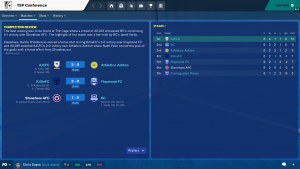