The guide to becoming a successful football manager tells me I should remain positive at all times. But, quite frankly, after suffering a humiliating 6-0 loss in my first match, I think I’m already past that.

It was one of the most abject displays I’ve been responsible for. We’d struggled to keep the ball, we had fewer shots on target than goals we’d conceded and I reckon a line-up of training dummies might have done a better job of defending set pieces than my lot. It was fucking awful. 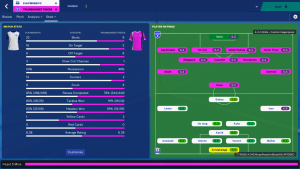 I don’t mind admitting that as the fifth and sixth goals went in, I started trying to think of creative ways to quit. I mean, the old reload and replay trick doesn’t work so well when there are six real-life coaches playing too. Especially when you’ve announced the game to a watching audience as well.

After deciding it was a disproportionate reaction to board a boat and hide out in the Hebrides (where I’m sure they still have internet anyway) to avoid further humiliation, I turn to the tactics screen.

Personnel-wise, I’m only going to make one change. After Gabriel’s lead-footed display against Flaymond FC, he’ll make way for Chris Smalling in central defence. Me and Basic Billy haven’t got off to the best start, but the stage is set for him to prove his worth.

The relative security Francis Coquelin gave the team from a deeper role during the middle portion of the match against Flaymond was one of few glints of hope, so I decide to do the same here.

While I’m concerned about our virtual non-entity of an attack in the opener, I want to ensure we have a stable base to build from. If we can avoid being dominated early on, then my plan is to become more positive as the game progresses and release Martin Odegaard into a more offensive number 10 position.

I also move to a more cautious mentality and decide not to ask my players to take such an aggressive pressing approach for fear of being pulled out of position too easily. I don’t want to give off the impression that I’m frightened of another heavy defeat but, if I’m honest, I’m petrified of it happening again.

My next opponent is Athletico Ashton, who scored two late goals to snatch a 2-1 victory against Killie FC in their opening match. Managed by West Ham coach Luke Hirst, they’re set with a 5-2-1-2 formation, with a solid foundation supporting a fearsome front three of Erling Haaland, João Félix and Paulo Dybala.

There are no cloggers at the back either, with a host of names that once more make me question my own draft picks. I’m particularly jealous of Hirst picking up Trent Alexander-Arnold, Aymeric Laporte and Sergej Milinkovic-Savic. Alas, I’ve made my bed and I’ll have to lie in it. 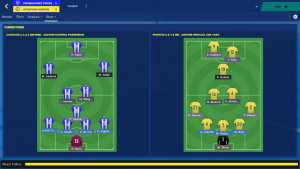 I tell the lads I expect to see a much better performance and they seem to be motivated by my words. So motivated, in fact, that we start the game in impressive fashion, forcing Athletico back into their own half and not letting them anywhere near our goal.

What’s more, we seem to be carrying some threat ourselves. As Odegaard stands over a free kick deep on the left flank, I’m filled with hope. And the Norwegian doesn’t disappoint. He whips in a dangerous set piece into the six-yard box and Stefan de Vrij gets in front of his marker to head in the first goal of the Tromsgodset Pieces era. I can’t tell you how relieved I am.

The game is tight and littered with fouls, but that suits me down to the ground. If we can stifle the opposition, then I’m confident we’ve got enough quality to conjure up something ourselves.

And I’m nearly proved right on the half-hour mark, as a fluent passing move starting from a David Soria goal kick ends up with Junior getting in down the left and picking out Harry Kane in the centre. I take in a sharp breath as I expect to see Kane plunder in from close range, but Matija Nastasic gets across to thwart him in the nick of time.

My disappointment intensifies within minutes, as Mo Salah presents possession back to Athletico as we look to defend a throw-in deep in our own half. All of a sudden, Alexander-Arnold is in acres of space on the opposite flank and plays in Félix, who clips the ball past Soria. It’s the first real chance they’ve created and we’ve been pulled back level.

Salah almost makes up for his mistake immediately as he tees up Kane, but Miguel Moya manages to turn the England striker’s effort wide.

Despite Kane’s profligacy, it’s been a pleasing first half and I see no reason to change anything at half-time. Hirst clearly does though and takes off Dybala to be replaced by Jack Grealish.

Watch the highlights from all of the round’s games

My game plan appears to be working, although we’re starting to be forced deeper. Milinkovic-Savic fires in an effort from the edge of the area that looks to beat Soria but, thankfully, slams back off the post. I’m too slow to react to the danger and moments later, Alexander-Arnold picks out Grealish in the box to head home for 2-1. Another header and we’re behind again.

I don’t want to be too reactive, so leave things as they are. Alas, a tame Jordan Henderson sighter is the best I can muster in terms of a fightback and decide I need to take action. As planned, I tweak my formation by bringing Coquelin forward to create a number 10 role. But it won’t be Odegaard who fills it as I bring him off for Gerard Deulofeu and move Marco Asensio into a more central position. I also decide to make a change at left back by introducing Marvin Plattenhardt in place of Junior.

While I’m now posing more of a threat going forward, I’m open to be exploited at the back with Grealish the main beneficiary of the new-found space. As I begin to worry a third goal could be coming, Plattenhardt and Asensio combine to produce a dangerous cross in from the left that Salah manages to get on the end of. GOOOOOOAL! It’s 2-2!

My previously conservative approach is history and I have no intention of accepting a point, so I continue to press forward. Chances keep coming at both ends as a result, with Soria denying Wissam Ben Yedder and then Plattenhardt coming to the rescue to clear a Willy Boly header off the line.

Do I see this as a warning? Do I heck. I choose that attack is the best form of defence and chuck on Tammy Abraham to support Kane up front – if I’m going down, I’m going down fighting.

Abraham goes close as the clock runs down and just as though it looks as if we’re set for a draw, another Plattenhardt cross picks out Salah and the Egyptian converts. GOAL! I’m mid-knee slide before I realise the goal has been ruled out. I’m devastated.

The replay shows it was the correct decision by the slightest of margins (watch the highlights), but I’m still as aggrieved as only a true competitor can be. Because that’s what I am now, a true competitor.

After being so well-beaten in my first game, I’ve got a point and arguably could have taken all three. I’m also off the bottom of the table and have genuinely seen enough within my ranks to start believing we’re not so hopeless as first thought. At least that’s what I’m clinging on to. 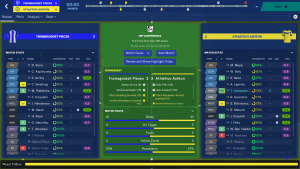 “Despite not winning my first match, I thought the performance was very good. We dominated possession and had a lot of clear opportunities, so there was no real need to change much.

“My only swap was on the bench, where I included Cesc Fàbregas instead of Sofiane Boufal. I felt Asier lllarramendi and Matteo Guendouzi looked a little weak at times in the first game, so that provided a little more strength available to me if I needed to change anything mid-game.

“Being at home, I decided we could continue with a similar mentality but was disappointed by the lack of possession. Even so, we created a significant number of good and key opportunities to help us win.

“I felt we controlled the game from early on, with Memphis Depay and Nabil Fekir in particular putting in strong performances. And with Virgil van Dijk at the back, I’m confident we’ll keep more clean sheets.

“My only current worry is the form of Sadio Mané, who is one of my key attacking players but has been the worst performer so far. My main aim in coming games is to continue, perhaps be a little more clinical and get Mané up to speed.”

“A second consecutive defeat and another after I’d taken the lead. The roots of my problems so far are that I’m not good enough in possession or as good at creating chances as I’d hoped. In hindsight, I probably recruited too many individuals, hence why Zlatan Ibrahimovic has scored my only goals. In the first game, I lost a last-minute goal to a free kick from the edge of the area, so maybe I should have been more conservative in the defensive third in the final few moments of the game.

“I lost the first two matches as I was too focused on how I wanted to play, rather than just winning the game. So I need to manage the game better in the phases. A couple of changes to personnel and shape will get me off the mark, I’m sure of that.” 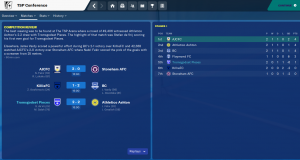 Want to see more? You can watch all the key action from each game week in our FM20 Project, The Coaches highlights post.