I’d come within inches – nay, centimetres – of beating Athletico Ashton and we’d put in a performance that suggested we could more than hold our own in this competition after all.

After losing the opener 6-0, my focus had shifted to merely saving face. Making sure we weren’t embarrassed again and not allowing dreams of glory to stray much further than scoring a goal. Now, after both of those objectives had been achieved, I was starting to dream of securing a top-four spot and reaching the final play-off. And this was after a draw. Imagine if I’d won.

Following that first defeat, I’d been contemplating going full Tony Pulis and stacking the team with defensive players to hang on in matches and hope to grab a goal at the other end. As well as being dreadful entertainment for a series we want people to enjoy (sorry Tony, a series of 0-0 draws just won’t cut it), it’s just not my style.

In truth, the previous game could easily have gone either way. They hit the post and had a header cleared off the line, yet we had chances to nick it as well before the final whistle.

Buoyed by a new-found optimism, I was feeling much bolder as I prepared for a match against BC, a side managed by Chelsea coach Ben Cole that had taken four points from their opening two matches.

If that start wasn’t impressive enough, it had been achieved without the team’s best player. Lionel Messi had been sent off within the first half an hour of the opener – a match BC still went within minutes of winning – and had breezed to victory in the following match with the Little Flea suspended. But even a refreshed Messi’s return couldn’t scare me.

Rather than take the same approach I took from the start against Athletico Ashton – providing a steady based to build from – I decide a better approach would be to get on the front foot, playing a similar style to the one that nearly stole the last game in the dying moments.

This meant instead of using a defensive midfielder, I’d shift everybody forward and use a number 10. So with no personnel changes from the previous match, this meant Francis Coquelin would move back into the heart of midfield and Martin Odegaard would sit just behind Harry Kane, who had been decidedly quiet in the first two matches. 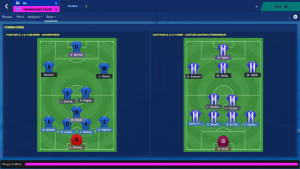 This would either prove to be a tactical masterstroke or the mark of a naive manager whose adrenaline levels were still through the roof after the whirlwind ending against Athletico (I refer you to the preceding paragraphs).

My approach would undoubtedly leave me exposed at the back, allowing BC’s dangerous duo of Messi and Neymar more space to roam. But I had Kane and Mo Salah, who could be equally as devastating given the extra support.

Early into the match, it was clear I’d made an error of judgement. And I don’t mean the sort that you can quickly correct. This was a stinker.

Within 90 seconds, my woodwork was shaking. Stefan De Vrij dallied on the ball just inside the BC half and after having his pocket picked by Leon Goretzka, the German steamed in on goal, with David Soria flicking the effort onto the crossbar. Neymar, Anthony Martial and Benjamin Mendy all went close in the next 10 minutes, while my lads appeared to think the ball had a timebomb inside, as they hacked it about in whichever direction they were facing.

It was no surprise then when Neymar finally stuck one in the back of the net. He and Martial both had chances from close range, but after blocking two attempts, the Brazilian jabbed it in the bottom corner. There was only 13 minutes on the clock and I’d already faced seven attempts.

As the chances kept coming, common sense would suggest that I’d eventually react. My wild optimism seemed to have morphed into blind panic as I decide to fall back even deeper in an attempt to crowd out BC’s onslaught. Coquelin was moved back into the defensive midfield role and I sub Odegaard for Federico Valverde as I try to gain a foothold. Only 22 minutes had gone and it already felt like I was getting desperate.

The bad news was the changes seemed to have very little impact. The good news was, well, that we managed to make it to half time without being completely dead and buried. Much of that owed to Soria, who saved from Messi, Neymar and Goretzka, while the crossbar stopped Dayot Upamecano from doubling the lead.

Incredibly, I went close to levelling on two occasions before the half-time whistle blew, with Salah and Marco Asensio seeing strikes clawed away by Kasper Schmeichel. Frankly, if we’d equalised after our performance, I’m not sure I could have looked at my own reflection in the mirror through pure embarrassment. Soria had made 11 saves in the first half, the frame of the goal had stopped another two and somehow, I’d found enough time to keep more possession than BC. That was probably down to all the times Soria was holding on to the ball for dear life. 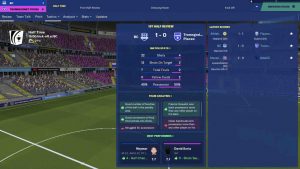 I bring on Marvin Plattenhardt for Junior at half time. I’m not sure why, but by this point I was just drawing lines on the tactics board and hoping the players would interpret that as some sort of wizardy.

Cole made a change too, with Jamie Vardy coming on for Wilfred Ndidi. Evidently, my performance no longer carried enough threat to continue with a defensive midfielder. I don’t blame him for coming to that conclusion.

The second half started without much action until Salah seemed to decide that if my tactics weren’t going to let him show his attacking talents, he was going to start offering them up for BC. His bizarre back pass let Vardy in on goal, but thankfully Soria blocked his effort.

My final roll of the dice comes on the hour mark when I introduce Gerard Deulofeu in place of Asensio. But don’t worry, it didn’t change anything, as within a minute of the substitute, Martial’s cross picks out Neymar to head in a second.

Kane went closest to pulling one back with piledriver from the edge of the area that stretches Schmeichel and somehow we managed to squeak throughout the final whistle without coming under any severe threat of conceding more.

Don’t make any mistake, despite the scoreline, this had been a worse performance than the 6-0 defeat to Flaymond FC. The dressing room knows it, I know it and if you haven’t cottoned on by now, you really should.

Cesar Azpilicueta looks dejected as he sits in his Chelsea-issued pants in the dressing room. I know exactly how he feels as I shut myself in the changing room’s toilet cubicle until the players have left. I’ve got some serious soul searching to do.

“It was my first victory of the campaign and a lot owed to a tactical rethink following defeat in my opener. I lost the first game 2-0 after experimenting with a 4-4-2 system based on a high press. It clearly didn’t work, so I reverted to my favoured 4-2-3-1 system that looked to control possession better – it clearly worked, as I dominated the ball against KillieFC.

“I made a few changes to fit in with the new formation, moving Marcus Rashford to the left and bringing in Bruno Fernandes at number 10, so the two of them – plus Jadon Sancho on the right – could play off Robert Lewandowski as the lone frontman. I wanted to provide an injection of pace around the striker and it seemed to work.

“This was my original plan when I did the draft, but after playing around with my normal approach, I’ve learned I’m much better off sticking to what I know.”

“Going up against a team with five defenders was a different challenge to the first game when we won comfortably. I’d spotted that and made some adjustments to my own tactics to counteract that, knowing they’d be playing wide with their laterals.

“Unfortunately, our wingers didn’t have the best game. Thomas Lemar and Isco couldn’t produce reproduce the constant pressure they had done in the first game and made a lot mistakes in one-on-one situations.

“We tried to be aggressive from the beginning, but it didn’t really work, so I adjusted the tactic after the first 25 minutes to play more cautiously, so the opponent couldn’t use both flanks due to poor pressure from the wingers.

“We didn’t have too many chances to score, but neither did the opponent. To sum, it was a fair result for both sides.” 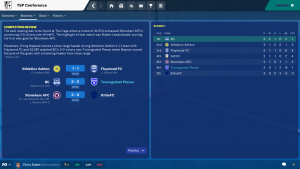