After three months of competition, we’ve finally whittled our group of real-life pro coaches down to a final four. Well, a final three coaches and – against the odds – our editor, Chris, who definitely isn’t a tactical whizz.

We’ve seen some stonking goals, big thrashings and plenty of drama, and there’s still plenty more to come with our final play-off taking place next week. 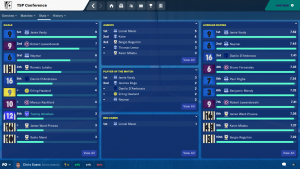 With four teams left fighting for the inaugural TSP Conference title, they’ll face off in two-legged semi-finals before the two winners juke it out.

But before we show off the action in the finals week, let’s run down the four finalists and how they’re going to try to come out on top.

Moment to forget: A mid-season struggle with consecutive blanks against Flaymond and Athletico Ashton 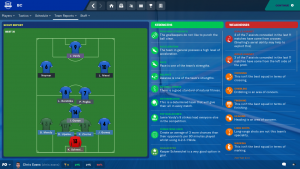 After 12 matches, only goal difference separated Chelsea coach Ben Cole’s side, BC, from second-placed AJCFC. And with a front two of Lionel Messi and Neymar, it’s no big surprise they had that extra firepower to take top spot.

Despite the star-studded frontline, it was Jamie Vardy who top scored and had the highest rating in his side. In fact, Vardy was the top ranked in both categories across the entire competition.

Cole favoured a 4-3-3 formation throughout and offered very little variance to his approach, favouring consistency – and with eight wins from 12, it’s difficult to see a reason why he needed to. His most regular swap was at centre back, as he flipped between Kurt Zouma and Dayot Upemecano depending on the pace of the opposition’s forwards.

While the team structure stayed the same, Cole – who has worked in England, USA, China and Thailand as part of a burgeoning career – did admit to finding he dropped behind early in several games at the start of the competition, so swapped his mentality from attacking to balanced or cautious when he was playing away.

Cole’s strategy: “I’d never done an FM draft before, so when I knew I was doing one, me and my brother did a couple of them to see what it was all about. I’m massively into NFL, so I’m quite familiar with the whole draft system – although I was caught out with the financial side of it. I got Messi first pick and then, after that, I was just trying to get relatively cheap players such as Wilfred Ndidi and Upemecano – and it turned out I still had £240 million left at the end, which meant I could get Neymar too. I knew the system I wanted to play and aimed for players to fit those roles: a right forward to be a left-footed inside forward, a pressing striker, two ball-playing centre backs. I’ll stay the same for the finals and I’m confident I’ll win.”

Worst moment: A slow start, with only four points from three matches 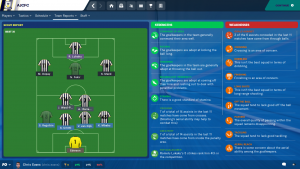 “I conceded a 94th minute equaliser in the penultimate game that cost me first place,” laments Adam Cooper.

But despite dropping an unnecessary two points late on against Flaymond FC, Cooper still coasted to the finals with relative ease. He’s also got to be considered a real challenger to take the crown, having taken four points from a possible six against Ben Cole’s BC side – making him a real threat if the two go head-to-head.

The only chink in Cooper’s armour is his away form, which could be a weakness in a two-legged semi-final. He would have taken maximum points from all his home games if it wasn’t for the late Flaymond equaliser, but seemed to labour away.

Typically lining up in a 4-2-3-1 formation, Cooper’s strong of Ederson, Virgil van Dijk, Asier Illarramendi and Sadio Mane was complemented by his roving full backs, who contributed seven goals between them as they cantered forward to join the attack.

Cooper’s strategy: “I knew what I wanted in terms of the type of players: ball-playing centre backs and a deep-lying playmaker who could spread the ball about, for example. I got lucky searching for attributes and picking up some played who were pretty cheap. I picked up Illarramendi for £11m and he stayed in the team all the way through and ended up with a midfield two of him and James Ward-Prowse, which I wouldn’t have expected. But then when I got Mane, I thought he was going to rip it to shred and did nothing and was my worst player for the first few matches.

“I’d like to think I’m a challenger. I’ll just carry on with the same styles I did through the tournament – I had a style for playing at home and part way through. I introduced a style for playing away that seemed to get some better results. The only consideration my end would be whether to play three in midfield, depending who I’m playing against and what their style is.”

Best moment: A brilliant start, taking seven points from the opening nine – including a 6-0 gubbing of Tromsgodset Pieces

Worst moment: A nightmare run of six defeats in seven matches after that start 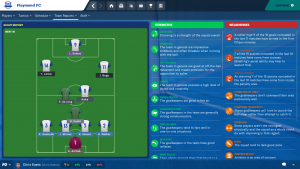 When Konstantyn Garbar’s Flaymond FC raced to the top of the table after the opening three matches, including that 6-0 win over The Set Pieces’ manager, it would have been easy to have considered him them the team to beat.

However, the goals – and points – dried up in sensational fashion. Flaymond dropped to the foot of the table as they lost four on the bounce without scoring, then only made it into fourth by rescuing a late point against AJCFC and edging past Killie FC in the final two matches. In fact, they picked up as many points in those first three matches as they did in the entirety of the rest of the league season.

The only solace is that the Ukrainian’s side seems to be quite streaky and appear to have found some semblance of their initial form just as the play-offs have come around. And having taken points from each of the other qualifiers, including victories against BC and Tromsgodset Pieces, Flaymond could perhaps be dark horses if they can get going.

Garbar’s strategy: “After I lost my first game, I decided to stay with the same tactic because it had worked before. But whatever I tried, I lost. With three matches left, I saw the last game would be decisive to get into the top four. I changed my approach a little bit because I knew I definitely had to win. I’d been playing with wing backs, so I changed to full backs with a more attacking approach. Before, I played with a cautious or balanced approach to the game because I believed we have a pretty solid centre of the pitch with N’Golo Kante, Koke and Frenkie de Jong, so we control the game and don’t need to rush with so much tempo. We took more of an attacking approach and won 1-0.

“I’m definitely an underdog right now and maybe I will make a few surprise decisions by changing the formation or player roles. I could go for 4-5-1 with one defensive midfielder or you can play attacking with a similar formation too. Maybe I’ll try 4-3-3 or a more attacking approach.”

Best moment: A mid-season run of 10 points from five games, propelling them into the top three

Worst moment: Away day embarrassments, picking up only four points and conceding an eye-watering 15 goals 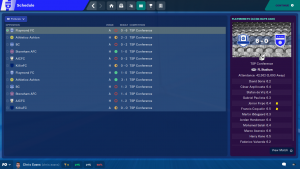 Qualifying for the final play-off, even if it was on a technicality, is a huge achievement for this team, put together following a dreadful draft where manager Chris Evans showed every ounce of why he was the only entrant not to get his hands on a real-life team.

A strong home run in the opening four matches – winning eight points from 12 – kept Tromsgodset Pieces in the hunt and made up for an otherwise hopeless away record.

Initially, Evans flitted between different variations of a 4-5-1 before landing on a 4-4-2 approach based on pace and long balls. The tactic was called Brexit and owes a lot to FM20 expert Rob Roberts-Facey’s advice mid-way through season. And it seemed to work. Just.

Evans’s strategy: “I lost five of the six matches I played against the other qualifiers in the league, scoring only three goals and keeping one clean sheet, so I’ll have to pull off an incredible upset if I’m going to win the whole thing. But I’ve got a plan.

“My semi-final opponent is BC and I took the lead against them in a 2-1 loss at home in our most-recent game. So if I can build on that, refine my approach and cause them trouble on the break, then there’s always a chance. Being across two legs makes the size of this challenge so much bigger and we may be relying on a fair bit of luck to escape the away match unscathed.”

Follow the FM20 Project: The Coaches final episodes on The Set Pieces next week. If you want to catch up on the story so far, every episode is on our website.