Jordan Henderson is singing along to the music as it blares out across the dressing room.

Stefan de Vrij doesn’t look impressed. Maybe he doesn’t like Miley Cyrus. Or perhaps he doesn’t want to be part of the next cringeworthy dressing room video to go viral (we’re looking at you, Glenn Tamplin).

It’s minutes before kick off in Tromsgodset Pieces’ final match of the TSP Conference season and I’m trying to rally my troops for one last push. Ok, my imagination may be running away with me here. But this is exactly how I envision my passionate instruction to secure a win in my pre-match team talk.

Rousing speech, followed by a blast of Miley’s rendition of The Climb. Whatever it takes to get that win.

Because that’s all I need from my trip to face Killie FC. Just one more win and I’m sure it’ll be enough to secure the unlikeliest of successes in the TSP Conference.

With the top two positions sewn up – and Stoneham AFC pulling out – I only need to finish above two of the three sides beneath me in order to qualify for the final play-off.

And with today’s opponent, Kilmarnock coach Craig Clark, one point behind me, defeat would put pay to his chances of overtaking me. An extra three points would also mean West Ham’s Luke Hirst, whose Athletico Ashton side are bottom, would need to win both of his remaining matches to leapfrog me – and I can’t see that happening. It sounds so simple.

But when I consider that I’ve only picked up three away points from a possible 15 throughout the entire tournament, perhaps that simplicity does become a bit more complex.

Despite conceding eight goals on the way to losing the last three matches, I decide not to change my tactics too much. I take a cautious mentality and set up ready to make the most of every counter-attacking opportunity, which still remains my best method of scoring goals. 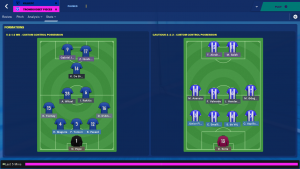 After it became clear in my last outing that the left side problem was probably a tactical issue rather a personnel one, I recall Junior at left back. He’s quicker and technically better than Marvin Plattenhardt, so I hope his inclusion will be an asset against a Killie side that operate with wing backs, therefore don’t play with as much width higher up the pitch.

Last time I faced Killie, the match was a non-event and the early stages threaten to be the same again with both sides cancelling each other out. Killie have slightly more of the play, but neither side have any better chances than the other, with Zlatan Ibrahimovic heading narrowly over from a corner at one end and Chris Smalling repeating the trick from a free-kick at the other. Not surprisingly, it’s 0-0 at the break.

If a stalemate isn’t exactly what I’d come for, I’m delighted to see Flaymond and Athletico Ashton are behind again. This would leave me two and three points above them respectively, and one ahead of Killie. And with Flaymond and Killie’s game in hand on me against each other, the prospect of escaping with a point is becoming more appealing.

With no need for Miley in the dressing room at half time, I gee the boys up and send them out for the second half. And we’re met by a Scottish storm.

Clark, who will also have identified this match as a must win, spent a while making tactical changes and his charges come out with more purpose. Ivan Rakitic fires one effort at David Soria, before Kieran Tierney heads another narrowly wide when well placed.

My anxiety levels are rising and after failing to react to the warning signs so many times during this competition, I decide to act. I revert to type and aim to pack the midfield to nullify anything Killie can throw at me. I move to a 4-3-3, bringing Francis Coquelin on to sit in defensive midfield, while moving Mo Salah and substitute Gerard Deulofeu onto the flanks.

With results going my way elsewhere, I’m willing to gamble that a point will be enough to secure my qualification spot. This gamble does rely on my maths being right and while the minutes tick away, I worry I’m making a big mistake.

I start checking the other scores, moving the formation around on my tactics screen to go back to 4-4-2, then swap back again. I bring on Harry Kane – in effect, removing the long ball threat I’ve relied on in recent matches – and spend most my time watching the clock tick down as my defence continually scramble the ball away to safety.

It’s mission accomplished as the game ends 0-0. But because of our lack of highlights, we’ve finished a lot sooner than the other matches, so I’m not sure if I’ve made the right decision. 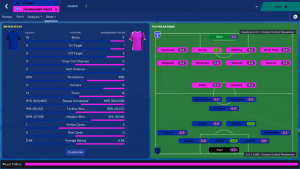 As long as neither Athletico Ashton nor Flaymond mount a late comeback to win, then I should be fine. And thankfully only one goal does come elsewhere, with Jeremie Boga grabbing a late point for Flaymond.

But it doesn’t change anything, I’m still fourth and know I can only be overtaken by one of Flaymond or Killie in their final showdown and Athletico Ashton would have to defeat AJCFC to gazump me.

They always say it’s more nerve wracking watching than playing, but on this occasion I feel incredibly chilled. I decided to watch Flaymond’s match against Killie FC which, in hindsight, I’m not sure why since that wasn’t the match that would make or break my season.

Harry Maguire scored an own goal to give Flaymond the lead early on and they continued to dominate proceedings, while Erik Lamela scored an equally quick goal to give AJCFC the lead at Athletico Ashton.

There were no dramas, no late scares, no palpitations, just an easy passage to the next round. After having battled and scrapped my way to be in this position, it felt like an anti-climax. But you can’t have an anti-climax without a climax – and, believe me, that’s how I like it.

Despite that, this shouldn’t detract from the realisation what an achievement this was. I’d made into the play-offs with a team that was notably weaker than most of the others I was up against. Ok, I benefited from one of the teams above me not being able to carry on, but let’s gloss over that.

Perhaps I was the lucky loser, just like Denmark were when they earned a reprieve to take part in Euro 92. And we all know what happened then. The same thing couldn’t happen for Tromsgodset Pieces, could it? 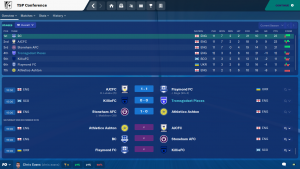 (N.B. The network game crashed at the end of the final round, so we have no final league table to show you. Convenient, yes, but you’ll have to take our word for it)

The final play-off matches will be published on The Set Pieces from the week commencing 13 July, so make sure you’ve caught up with all the episodes of our FM20 Project: The Coaches before then.