The thing about hope is that if it’s misplaced, sooner or later you’re going to be let down.

And while my hope gauge hasn’t quite run to empty, two defeats on the bounce have meant it’s on the wane. Although I’m determined not to let that affect Tromsgodset Pieces’ goal of reaching the TSP Conference play-off.

Playing in such a small league of, theoretically, level teams is a blessing and a curse. A few good results and you can shoot up the league, a couple of bad ones and you’re dropping backwards.

This is my justification for being stubborn and sticking to my guns. After getting a 4-1 tonking against AFC Stoneham last time out, it’d be easy to start tinkering with my team again while trying to avoid the inevitable answer: we’re still a bit crap. 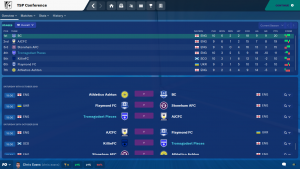 It’s not any sort of epiphany, it’s like when you put up a shelf and it clearly isn’t straight. But you try to pretend it’s all fine, despite having to stack one end heavier than the other and things keep dropping off it.

My squad is a bit like that shelf. I’ve got some of the parts to fix it, but my spirit level is bent and I’ve only got a manual drill. So, sometimes, the best option is to work with what you’ve got, accept it’s not easy on the eye and sometimes things will drop off, but there’ll be other times when it’ll work just fine.

Since spending time chatting to a Football Manager tactical expert in episode eight, the Brexit strategy I’ve adopted has been like making the best of a bad situation. Yes, we’re still vulnerable at the back, but we’re now creating more chances, scoring more goals and winning more matches. Let’s ignore those losses.

One thing I can’t turn a blind eye too though is Junior’s performance against Stoneham. All four goals came from his side of the pitch and it’s not for the first time I’ve been left feeling particularly exposed with him in my team. So, with Marvin Plattenhardt returning, Junior is back on the bench where he belongs.

Yet within 15 minutes, we’re 2-0 down and staring down the barrel of another heavy defeat. I don’t want to make it sound as though I’m a character from The Sims, but my hope and happiness bar is pretty much at zero. If only the giant God-like hand could chuck in a couple of goals for me.

But without relying on divine intervention, I need to come up with a plan myself. It seems tactical consistency isn’t serving me so well anymore as I try to quickly work out how I can stem the tide and attempt to get back into the game.

The goals we’ve conceded were both preventable. The first came after we let left back Sergio Reguilon run a long way infield, before picking Kevin Mbabu to make the most of the space we’ve afforded him on the right flank to whip in a cross that Sadio Mane heads home unchallenged.

For the second, we allow AJCFC too much space to play around us, before Mbabu plays in Erik Lamela, who has enough time to take a touch, look up, pitch a tent and lash past David Soria for 2-0.

Both goals came from my left side again and as I look frustratedly around, Junior appears to have developed a persistent cough. It must be in my head, but I could swear he’s glaring at me too. Ok, maybe it’s time I took him for an “it’s not you, it’s me” chat.

Despite our lack of defensive resistance, I move to be more positive and remove the instruction to get stuck in. I want us to get on the front foot and try to keep the ball as far away from our shaky backline as possible, while having a more structured base.

The changes appear to have the desired effect. Firstly, we stop conceding goals. Secondly, Marco Asensio and Tammy Abraham both go close to halving the deficit before half time.

While it’s encouraging, we don’t have much time left to simply find the positives anymore. With Flaymond drawing against Stoneham AFC, we’re currently dropping to fifth in the league and our qualification hopes looking increasingly precarious.

A few of the players look anxious as I come in at half time and I assertively challenge them to show me more after the break, which appears to have motivated them. I also remove the instruction to shoot on sight, as I want to make the most of the good positions we’re starting to get in.

But with little reward as we approach the hour mark, I make a double change. I bring on Harry Kane for Martin Odegaard, moving Salah out to the right and making him more advanced. Also, in one of my more hypocritical moves, I bring on Junior for Plattenhardt – although that’s partly because he still looks angry at being unfairly scapegoated and I hope some game time will reduce the chances of finding him standing on my drive in the early hours, just staring at my house.

As I contemplate extra security, Asensio breaks clear down the left, gets to the byline and cuts back a cross that Virgil van Dijk effortlessly latches on to. But his hoofed clearance doesn’t get out of his six-yard box, as Abraham stoops to block the clearance with his head and deflect it into the goal. In the most bizarre possible way, it’s 2-1.

Our stroke of fortune could be the spark we need for us to recover a priceless point. Yet we’re still struggling to build up a prolonged period of pressure, so I throw on my final change – you guessed it, Gerard Deulofeu is coming on for Asensio. I push the move Spaniard into a more offensive position too, essentially moving to a 4-2-4 role. It’s full gung-ho.

Salah tests Ederson in what I hope is the first of an avalanche of chances. Yet we fail to building up a head of steam, with Nabil Fekir firing a long-range effort Soria needs to parry over at the other end instead and not a fat lot else for us. 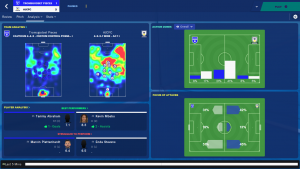 The whistle goes and it’s a third successive defeat. The good news is that Flaymond and Athletico Ashton – two of the sides below me – have also lost and with Killie FC not playing, we somehow remain in fourth.

I may have only one game left to everybody else’s two, but with every passing round of fixtures, the unlikely is becoming more realistic.

Whisper it, but I’m still hopeful. 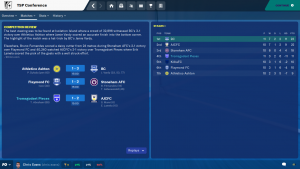