Yet, as Tromsgodset Pieces enters the TSP Conference finals as lucky losers, the past is irrelevant.

That’s exactly what the managers of teams who have enjoyed similar fortune in the past would have told their players, to differing impact. While the Danes took full advantage of their reprieve to play at Euro 92 by winning the entire tournament, Darlington lost for the second successive round as they were drawn out at random to take Manchester United’s vacant FA Cup spot in 1999-2000.

For my team, it became clear mid-way through the league campaign that Stoneham AFC would be unable to continue due to manager James Phillips’ technical issues and fifth place suddenly opened up an unlikely avenue to qualify.

So, now, after slipping in the back door, it’s a level playing field going into the finals. I may have finished 14 points behind my semi-final opponents, BC (which in a 12-game season is frankly huge), but we’re starting the tie at 0-0. That sort of moniker might sound a bit Sunday league, but it’s nonetheless true.

We lost twice to Chelsea coach Ben Cole’s outfit in the league with an aggregate score of 4-1. It wasn’t disastrous in terms of the scorelines, but in both games there were long phases where they looked like scoring every time they attacked – and they probably should have won by bigger margins.

The first leg will be away and will provide the sternest test. We were pretty hopeless on the road against the best sides, losing every away match to the four teams who finished above us.

Our 2-0 loss to BC was one of our worst displays and the scoreline alone doesn’t tell the full story of their domination. They had 34 shots, 18 on target and reduced us to only six efforts at the other end.

That was using a cautious 4-2-3-1 tactic with Martin Odegaard as a number 10 and was far too naive. By the time I changed to drop Francis Coquelin in as a defensive midfielder, it was too late and BC’s tails were up. We were lambs to the slaughter.

We’re a different proposition now though, so I decide not to read too much into that match when deciding how to set up here.

Instead, I focus on our home match, which we only lost 2-1 after taking the lead. And while BC were stronger than us, it was much closer. 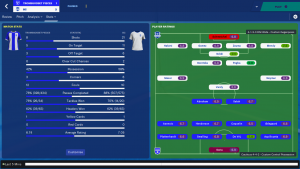 We lined up in a counter-attacking 4-4-2 that day, focusing more on getting the ball quickly to our front line than in our first meeting.

We were a lot more resilient and despite BC outshooting me by 21 shots to eight, they only created two clear-cut chances. Accepting we’re unlikely to keep a side boasting the likes of Lionel Messi, Neymar, Jamie Vardy and Paul Pogba completely quiet for 90 minutes, I take this as a positive. Especially considering we posed more of a threat, scoring a goal and hitting the woodwork.

Sticking with 4-4-2 is definitely the way to go in the semi and gives us the best chance to nick an away goal.

Keeping exactly the same instructions to the end of the group stage – where we only picked up one point from the final four matches – doesn’t make sense, though.

I decide to play with a lower defensive line to stop Vardy, the top scorer in the competition, with space to run behind my defence. I also ask my players to get stuck in and mark tighter, in order to make the match as unpleasant as possible for BC’s stars.

We’ll attack in a similar fashion, high tempo, direct bursts forward. But this time I remove the shoot-on-sight instruction as I’m worried we’ve been a bit wasteful of late, while asking the lads to play for set pieces. Simply because that’s how we go our solitary goal against BC in the league.

The team is otherwise as it has been in recent weeks. I bring in Marvin Plattenhardt at left back due to his superior defensive abilities and use Coquelin in place of Federico Valverde as I want more steel for the away leg.

I’m feeling surprisingly chipper about my chances. If we can keep the scoreline close and nab an away goal while we’re at it, I’ll be delighted.

And you know what? That’s exactly how I felt right up until the third minute. If there was one thing I needed to do, it was not concede an early goal. So when Pogba finds himself in acres of space 25 yards out and shapes up like William Tell would before firing an apple perfectly from a child’s head, there’s only place this is going. Right into the top corner of the net. We’re 1-0 down and I’ve barely even sat down.

While it’s not the best start, the floodgates don’t open as I’d feared. We quickly abandon our deep defensive line to avoid giving Pogba and co the chance to take aim again and we create a couple of openings of our own as the half wears on. Mo Salah gets in behind Dayot Upamecano and wriggles away to get a shot off a close range, only for Kasper Schmeichel to block it at the near post.

An encouraging half is coming to an end when a familiar bad habit returns. We concede yet another late goal. To make matters worse, it’s as scrappy as they come.

A cross-field ball picks out Achraf Hakimi in our box and although Plattenhardt blocks his effort, the ball drops to Messi who gets a shot off. It’s not particularly powerful but is placed just well enough to force its way past David Soria and into the net. The goal is a real sickener as I’m sure on another day we’d still be at 0-0 instead of two goals down.

So you can imagine my disgust as BC find the time to score a third one minute later. Pogba rising unchallenged in the box to head home Neymar’s corner. From a promising half where we’d performed admirably and competed well, we already look as though we’ll need a miracle.

Like a child who’s brimming with adrenaline after falling off his bike, I storm into the dressing room at half time and start changing my tactics and decide to bring on Harry Kane for Tammy Abraham, forgetting all the good that had punctuated the half. I’m in such a hurry to make up for those two late goals, I forget to give a team talk. When my boys need it most.

Unsurprisingly, we’re now really under the cosh and are struggling to even get out of own half. I turn to Valverde and bring him on for the booked Jordan Henderson because, you know, why not start to rest players for the second leg?

Attack after attack keeps coming at me, yet we somehow survive until the 71st minute when Neymar makes it four. Then to pour salt into our gaping wounds, the Brazilian smashes home a fifth in stoppage time. All I can say as he runs off celebrating is “oh, fuck off”.

Three words that pretty much sum up exactly how my entire team is feeling as we traipse off the pitch. Lucky losers? Oh, fuck off.

While Tromsgodset Pieces were getting the pasting to end all pastings in their semi final, Bolton Wanderers first-team analyst, Adam Cooper, was going up against well-travelled Ukrainian coach Konstantyn Garbar’s Flaymond FC side.

AJCFC start as strong favourites, having only missed out on winning the league on goal difference to BC and that was reflected as Romelu Lukaku and Erik Lamela struck early on to give the hosts a 2-0 half-time lead, with Sadio Mane and Lukaku adding to the rout in the second period.

The only crumb of comfort for Flaymond was a late consolation by Andrey Yarmalenko, earning Garbar’s side an important away goal that they’ll be hoping to profit from in the second leg.

The final play-off matches will be published on The Set Pieces from the week commencing 13 July, so make sure you’ve caught up with all the episodes of our FM20 Project: The Coaches as the competition comes to a close.