Tears for heroes dressed in grey, no plans for final day. Stay in bed, drift away. It could have been all songs in the street, it was nearly complete.

If you don’t recognise these lyrics, you’re either too young or didn’t feel the pain of England’s Euro 96 semi-final defeat like I did. That tournament was when I really discovered football – and the inevitable disappointment that comes with it – as an innocent eight-year-old.

So, when Baddiel and Skinner rebooted Three Lions two years later for France 98, their lyrics about Euro 96 heartbreak spoke deeply to me.

It’s fair to say I felt a different sort of disappointment as Tromsgodset Pieces lost 8-0 on aggregate to BC in the TSP Conference semi-final. But, oddly, there was no hint of what might have been like at Euro 96.

The utter dominance Chelsea coach Ben Cole had shown by dispatching my team so ruthlessly undoubtedly placed him as the favourite for the final, but going up against Bolton first-team analyst Adam Cooper would be a much sterner test.

BC and AJCFC were only separated by two goals in the league and with the latter taking four points from their two matches, they have to be considered a threat.

Cole is clearly in confident mood and sees no need to change his tactics and his team looks formidable, whereas Cooper tweaked a few roles to be less attacking in order to keep BC’s attacking players in check. 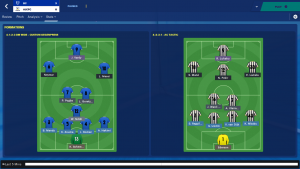 It’s BC who start the stronger, with Neymar seeing a short turned round the post in the opening moments before the Brazilian hangs up a free kick that Jamie Vardy wins at the far post and while his goal-bound header may already have been going in, Kurt Zouma provides the faintest of touches to open the scoring.

AJCFC seem to having much the same problems I did in my semi-final and despite making some inroads going forward, it’s hard to contain Cole’s side. Shortly after Kevin Mbabu sees a shot parried away, a long ball by Achraf Hakimi plays Vardy clean through and he lifts the ball over Ederson for 2-0. But just as the game appears to be over already, the offside flag raises to chalk the goal off. AJCFC will survive another day.

Once more, AJCFC create a series of half chances as they to get back into the game, only to be pegged back at the other end. Neymar picks up the ball on the edge of the area in what appears to be a safe distance from the goal, but as the bank of black and white shirts in front him part like the red sea, he dances through the gap before lashing home. There’s no chance of this goal being taken away from BC.

Cooper takes this as a sign to let the handbrake off and he switches an attacking 4-2-4 in a desperate attempt to get back in the game.

But like a big kid holding his younger brother at arm’s length by placing his hand on his forehead, nothing seems to seriously threaten BC as they repel attack after attack before it gets too close to their goal – forcing AJCFC’s players to take pot shots from long range instead.

Leonardo Pavoletti comes on to add some extra firepower to the forward line, but he struggles to make too much of an impact as crosses are aimed in towards him.

As the game enters the 87th minute, a breakthrough finally comes. But the bad news for anybody hoping for a comeback is that Neymar is involved again. The PSG frontman picks up the ball on half way, slaloming through three defenders before bearing down on the penalty area and being upended by Asier Illarramendi. Messi dispatches it and the game is up. 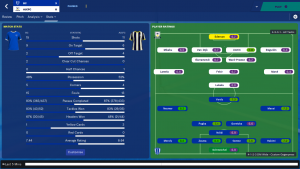 The final whistle triggers an explosion of blue shirts on to the pitch as they celebrate their triumph. It’s well deserved, they have consistently been the best team I’ve played during the entire competition.

“The Messi and Neymar combo is unstoppable – I’ve been ripped apart by Neymar every time I’ve played against you,” Cooper says as he congratulates his rival. Add Jamie Vardy to the mix and that’s been the key to BC’s success.

Catch up with all the FM20 Project: The Coaches episodes on The Set Pieces.