Can a man who failed so miserably with Everton perform any better when bestowed with immortality and granted complete control of an ancient society of hunter-gatherers? Will he win the space race or die in the dark ages? Find out now. Or don’t. I’m in so deep now that wild horses couldn’t drag me out.

We may have just signed a peace treaty with the Aztec Empire, but I have no intention of holding to my word. Montezuma invaded my lands without reason, he slaughtered Oasis and Pulp in his bid to claim my cities and he robbed us of our most heroic champion, the mighty Meat Loaf, who died so that others might live. I am tooling up and I am marching to war. I station Mansun to the west of the empire to keep an eye on the Mongols, because a sneak attack from them would ruin everything, while Blur stand ready in the hills to the east. Now it’s just a race to build catapults. 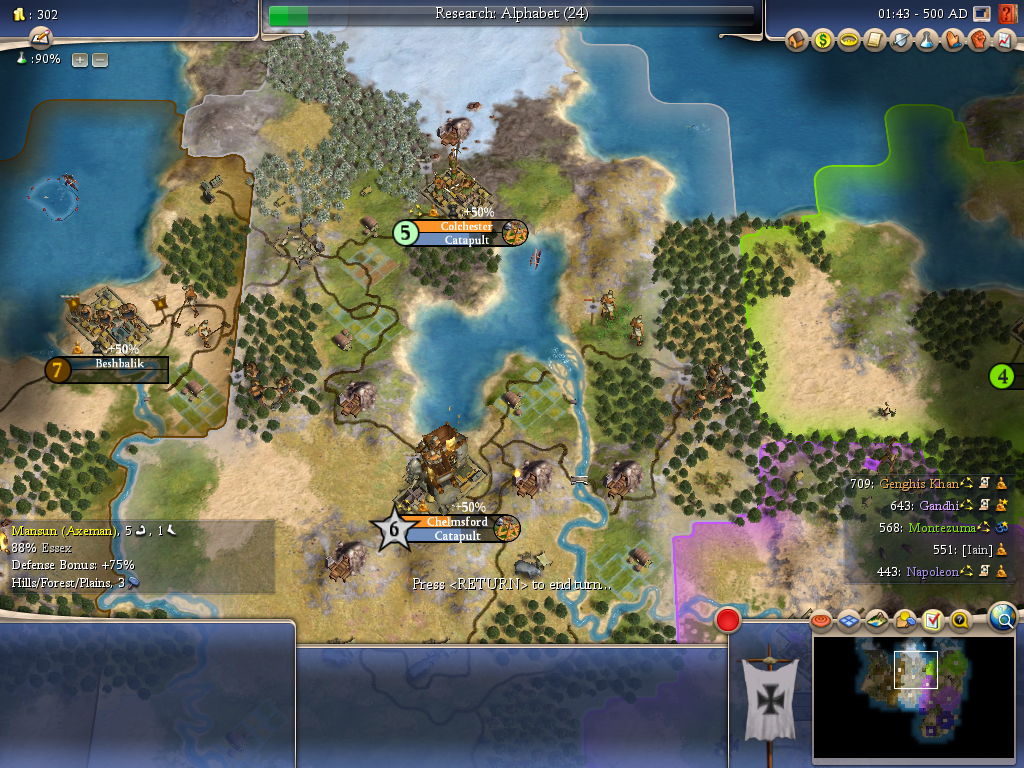 The rearmament process moves quickly and by 700AD, I begin to link my units together ready for the invasion. And then something very odd happens. Apparently unaware that Adolf Hitler lost the Second World War the moment he opened up a new front in Russia, Montezuma executes his own Operation Barbarossa, declaring war on Gandhi to his south. As my axemen gather on his western borders, we watch in delight as a six-strong stack of axemen marches away from his cities. 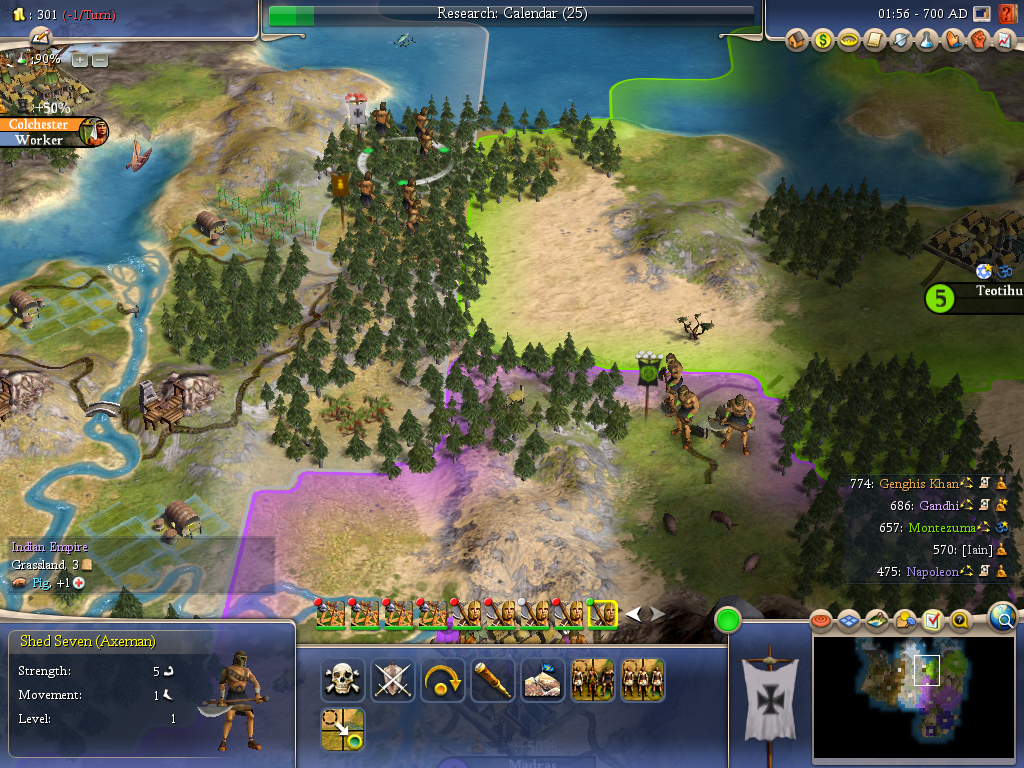 Of course, the ideal outcome is that both sides batter each other senseless without either one gaining the upper hand. Unfortunately, Gandhi is still at war with Napoleon and Madras is not as well defended as it should have been. In one fell swoop, Montezuma crushes the Indian archers and then burns the city to the ground, losing only two units in the process. You wouldn’t see Bananarama capitulating like that. 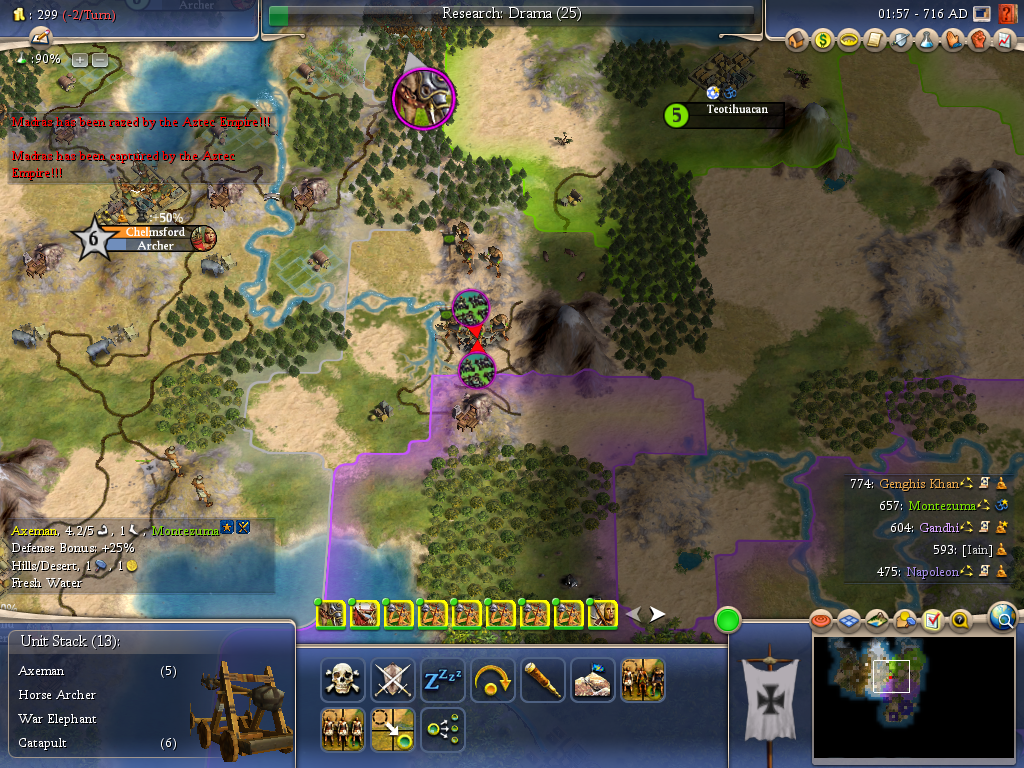 Anxious to preserve some sort of balance of power, I approach Napoleon to see if he might lay off Gandhi for a bit. If the Indians aren’t fighting a war in the south, they can come up north and give me a bit of a hand. Unfortunately, Napoleon has no intention of calling off his dogs. I even try to offer him the secret of Monarchy, because that’s always been popular in France, but he’s not having any of it. Sorry, Gandhi. I did try. 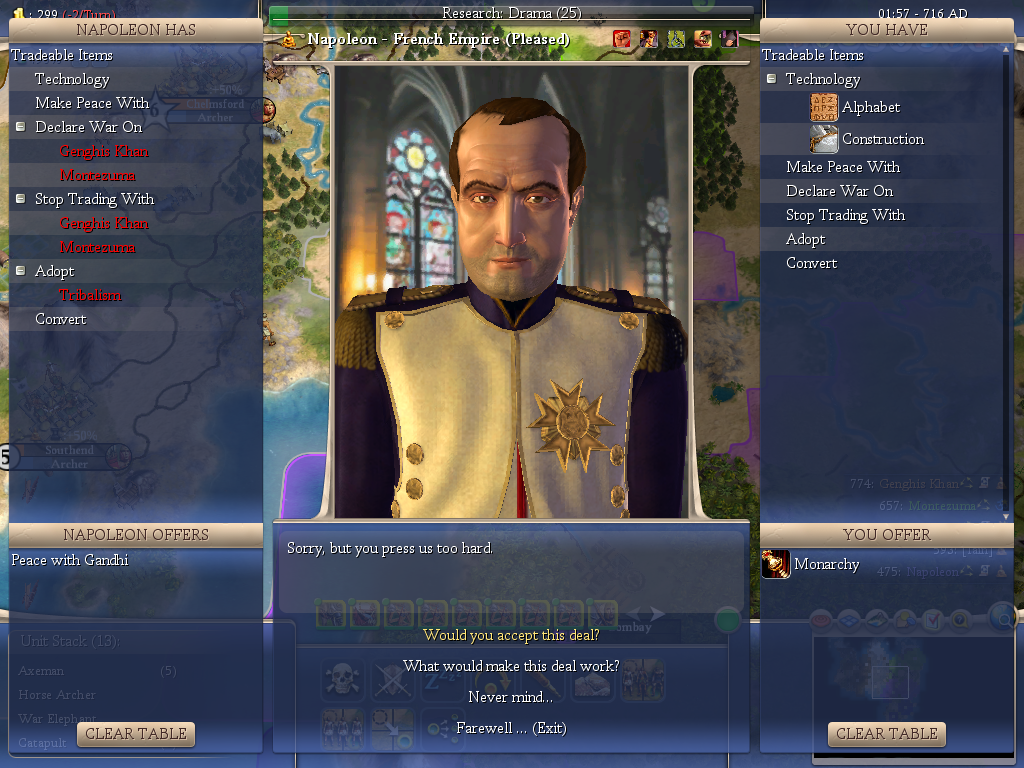 But we can’t afford to worry about others. We have our own war to fight. And in 732AD, we’re ready to go. Has there ever been an army this terrifying? We have six catapults (Van Morrison, Barry White, Buster Bloodvessel, Pavarotti, Aretha Franklin and Monserrat Caballe), five axemen (Blur, Suede, Sleeper, Elastica and Shed Seven), the war elephant Henry Rollins and the flamboyant horse archer David Bowie. I am pumped. War? What is it good for? Permanently pacifying a genocidal neighbour, that’s what. Hngh! 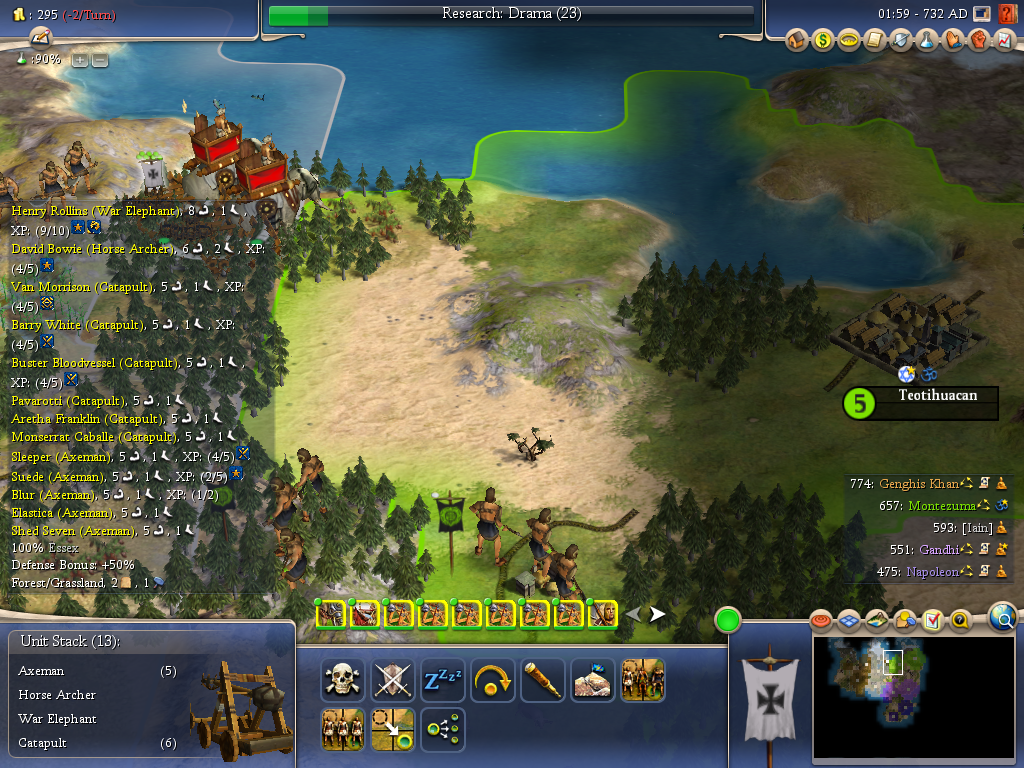 Ever the diplomat, I alert Montezuma to the fact that a state of war exists between our two nations and he responds by giving me what those of a certain generation would call, “The Nescafe Handshake.” 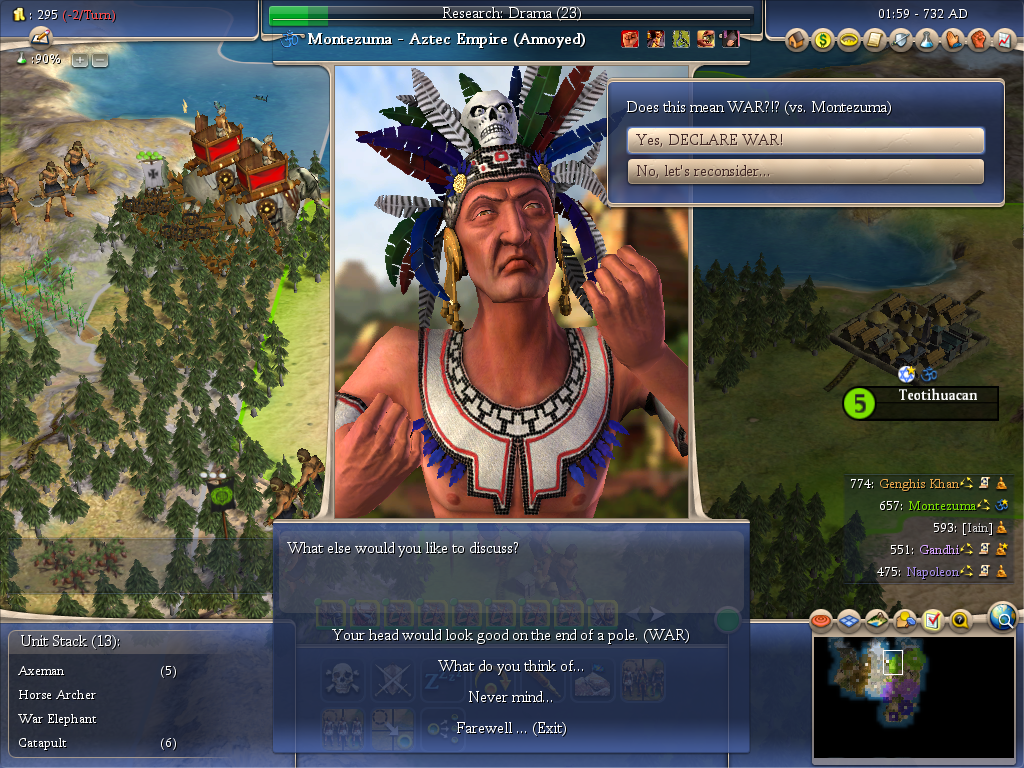 But before we’ve even reached the walls of Teotihuacan, news reaches us that the Indians have suffered another heavy blow. They’ve lost Bombay to the French. This is bad for a number of reasons. Firstly, because we now have a large, experienced French army to consider in the south. Secondly, because the Indians will fall back to defend Delhi with everything they’ve got, leaving nothing for our mutual struggle against the Aztecs and thirdly because all this fighting only allows Genghis Khan to grow and prosper in the east. And that can’t be a good thing. 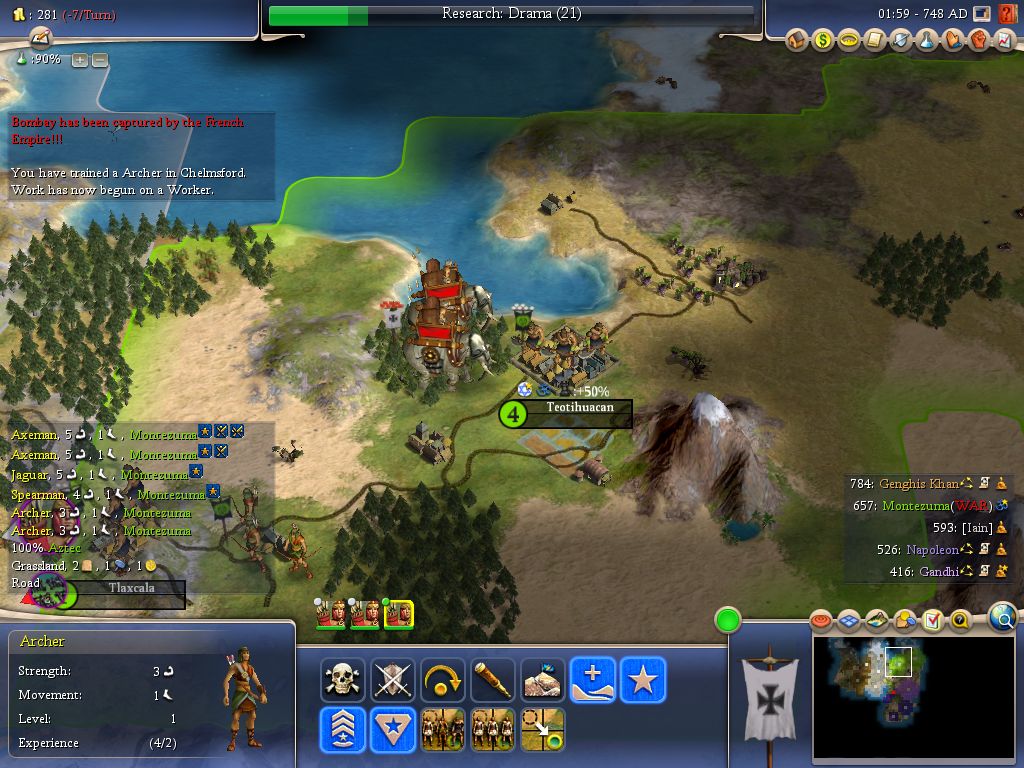 But these are wider geopolitical issues. I’d rather just start the attack, if that’s all the same to you. With a mighty roar, the catapults lurch into action. In a couple of hugely cathartic turns, we reduce the walls of Teotihuacan to rubble. The Aztecs have significant forces, but without walls, they have no defensive bonuses. But someone has to go over the top first.

Pavarotti steps forward. He tells me that Meatloaf was a friend of his, that they used to dine together and that he would very much like the honour of avenging him. I’m happy enough with that, and it certainly solves the mystery of the missing food in the Southend granary. Pavarotti adjusts his bow tie, roars through his scales, takes a deep breath and rumbles forward to dispatch his terrible payload. He dies quickly, but with honour, causing gruesome collateral damage to the Aztec forces sheltering in their doomed city.

Now it’s a free-for-all. Suede and Sleeper get theirs and within moments the flower of Teotihuacan’s youth lies shredded and lifeless in the mud. Shed Seven have stayed on standby to mop up the survivors, something they take to with great enthusiasm. Rick Witter, it transpires, has an unsettling penchant for necklaces made of human ears. But you know what? I’ve always felt that discretion is the better part of valour. He seems happy enough, so we let him get on with it. 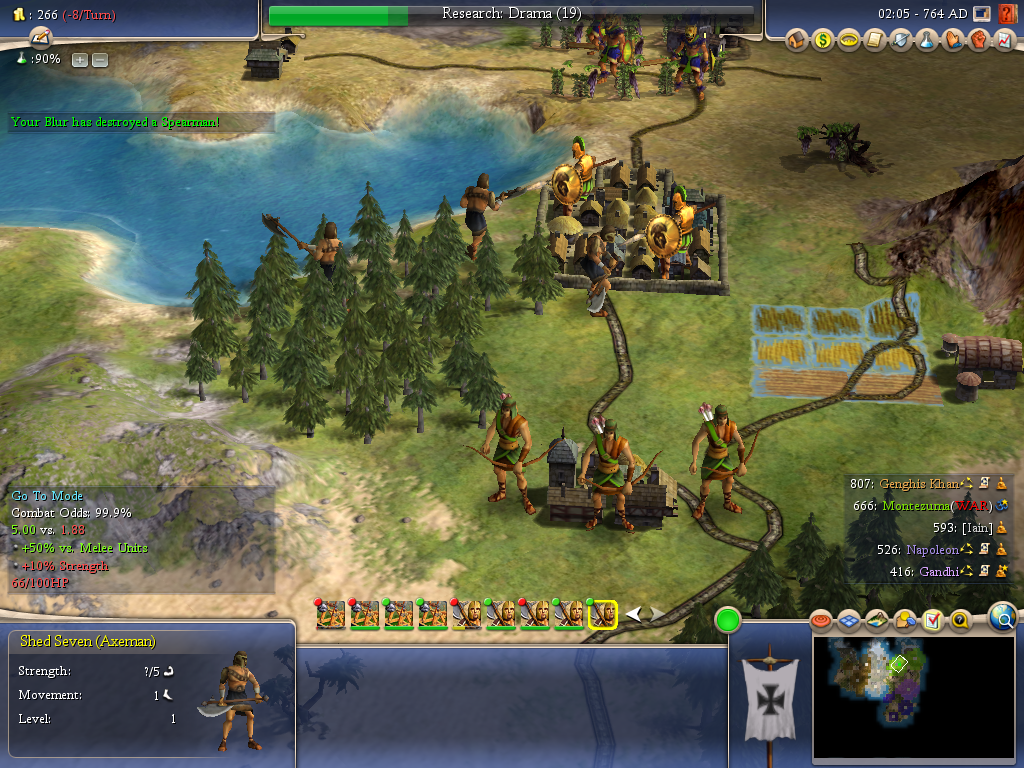 Teotihuacan has fallen. Our victorious Essex troops celebrate in the ruins, slugging back cans of Carling and issuing forth their traditional mating call of, “Oi! Oi!” We have avenged our friends, we have taken a mighty city, but we are not finished yet. There is still evil in this world and I will not rest until it has been extinguished. Tonight, we sing and we drink and we dance and we fuck. 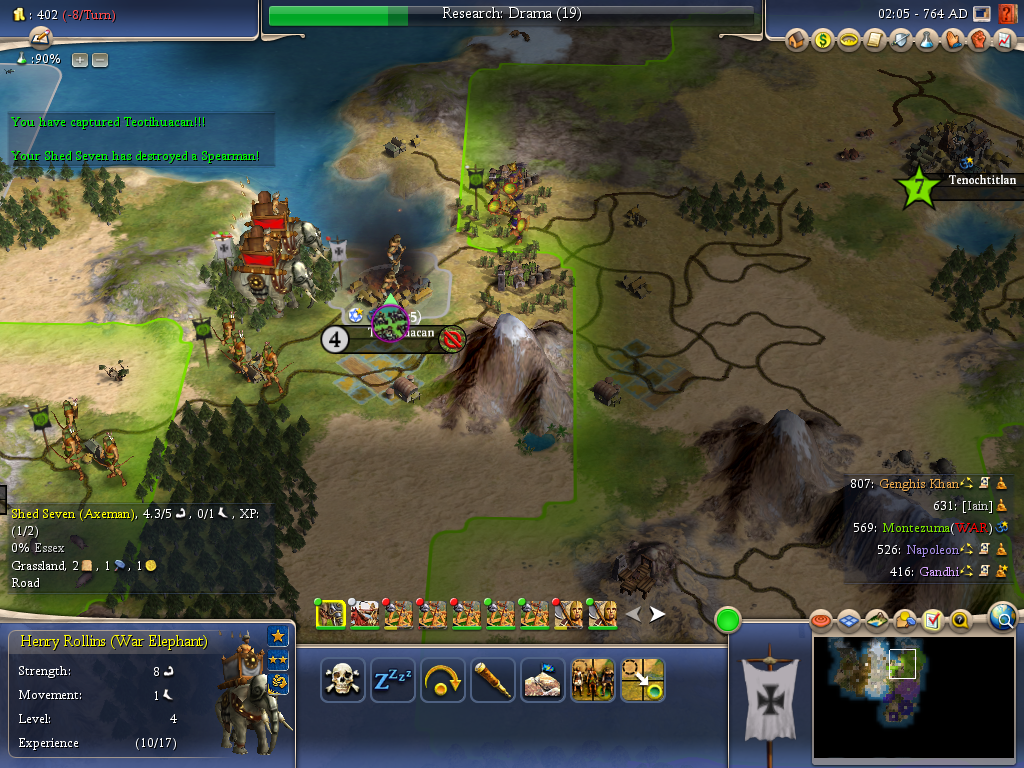 Pavarotti, killed during the assault on the Aztec city of Teotihuacan in 764AD