It’s been a week, but I’m still not okay. It would have been easier to lose a cup final than to experience this; an entire season of over-achievement wasted in one evening. Everyone knows that you get games like this. Everyone knows that in some games you’ll play well, but the opposition will score with the only two chances they have. But why did it have to be that game?

What makes it all the worse is that this wasn’t an isolated incident. We also lost the first game of the season away at Middlesborough. And so now we have to go away to Tottenham and then away to Sunderland, which gives us a very real chance of going five matches without a win. This is why they say that you should always strengthen a winning side. Because if you don’t do anything, or you can’t do anything, you go stagnant very quickly.

Tottenham have improved since Frank Rijkaard took over in January. They now play a 4-4-2, though they tend to have Robbie Keane floating in the hole. We took six points from them last season, but I’m not as confident this time. We need to get back to basics, but it’s hard to do that when your heart is still aching. There has to be a reckoning for what happened against Zurich. People have to know that no-one is safe. Out go Alan Stubbs and David Weir and in, after a year of careful preparation and cultivation in the reserves, come the Chinese pair Li Tie and Li Weifeng. Statement. 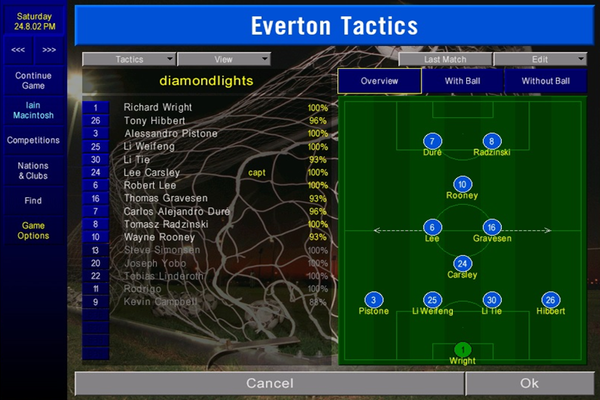 There’s no question now; we’re in crisis. Tottenham rip through us like a gale, scoring three times in the first 30 minutes and leaving us chasing shadows. It’s not the fault of the Chinese lads, everyone plays badly. It’s a really awful day and there isn’t much to discuss. I can’t help thinking that this is inevitable really, given the external factors, but that sort of talk won’t help anyone. There is the core of a good team here, we know that. We just need to rediscover ourselves. 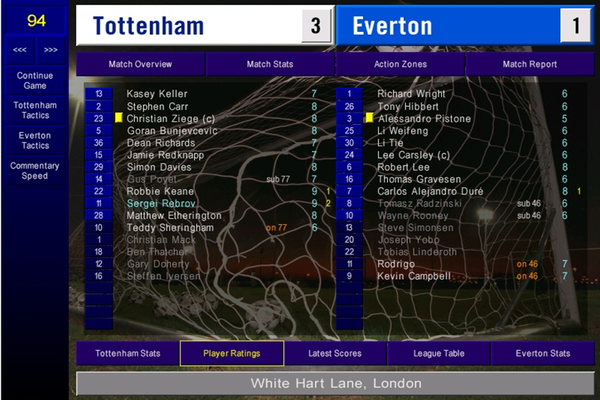 In the meantime, and partly because I’m still cross, I sell David Unsworth to Millwall for £750,000. The board remind me every month that they are seriously concerned about the finances, as if I can do anything about it, so this might keep them quiet. I don’t want to give them any excuse to sack me if we don’t pull out of this nosedive.

It won’t get any easier at the Stadium of Light. Howard Wilkinson has a lot of making up to do this season after a bright start ended with a disappointing sixth place finish. They’ve started well, winning their first three games in a row thanks to some fine performances from England international Matthew Piper. In the two days before we play, we lose Thomas Gravesen, Kevin Campbell and Alessandro Pistone to injury.

One of the things we did in the early days was to make sure that every opposing player, bar the centre-backs, was man-marked. It was simplistic stuff, but it gave everyone a job they could focus on. Towards the end of last season, I switched to zonal marking with Lee Carsley used for special ops when we came up against a world-class player who needed to be taught about flesh wounds. I think it’s time to return to that. Maybe we got ideas above our station. Maybe we forgot that we are grizzled blue dogs of war. 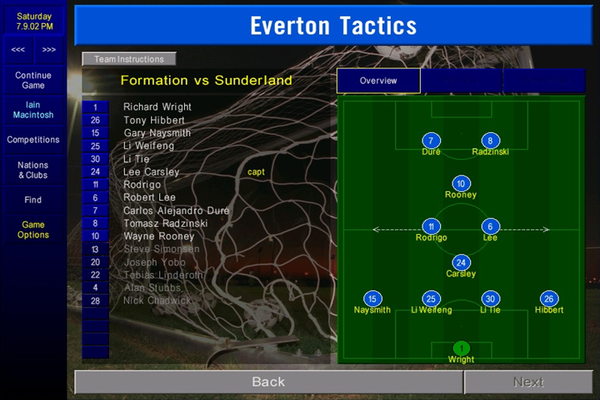 We are still the grizzled blue dogs of war. We have our honour. But we do not have any points. This was a battle and, as Steve Bleasdale once said, “when it’s a battle, you fucking battle.” Well, we fucking battled. And we lost. But there were positives. Li Tie was outstanding, dominating Flo in the air. Gary Naysmith excelled in his first start for me. We fought, we came back from a goal down, we weren’t quite good enough to hold on. But we fought. 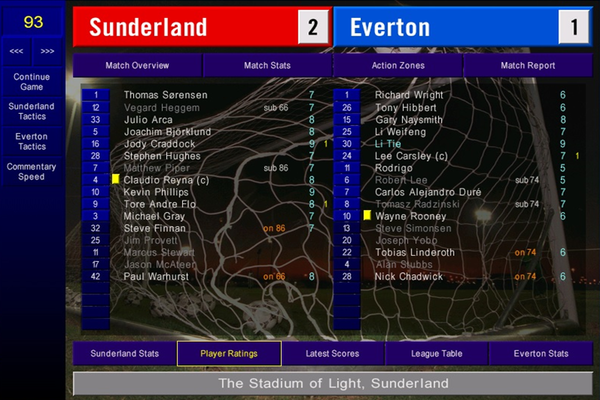 I might have been a bit hasty last week, what with storming out of the office and screaming at the Gods, and all that. After all, the very fact that Everton are in Europe is something we should cherish, even if it is only the UEFA Cup. And the UEFA Cup wasn’t that bad in the old days. Yes, there are still eight Champions League parachute entries, but there are no group stages, it’s all knock out. With that in mind, we’ll go with an unchanged team against Fenerbahce. They’ve got Ariel Ortega, so this may not take long, but I won’t have any Everton team of mine throwing matches. 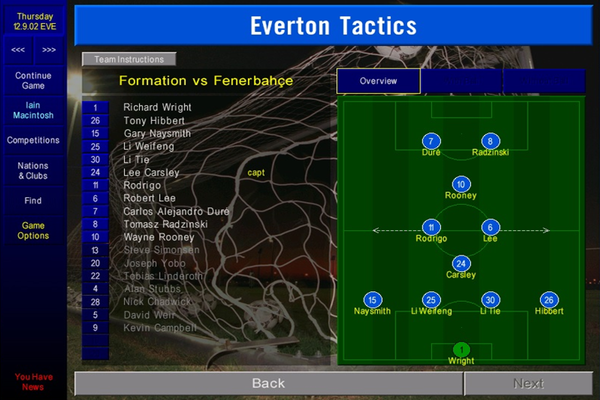 Wow. I don’t think anyone saw that coming. We take an early lead through Rodrigo, now playing and excelling in the centre of midfield because everyone else is out, and then lose it almost immediately. Undaunted, we scamper into a 4-1 lead at the break and continue to pepper their goal in the second half. A refusal to shut the game down in the latter stages costs us, but four away goals and a single-goal lead is not to be sniffed at. Have we turned the corner? 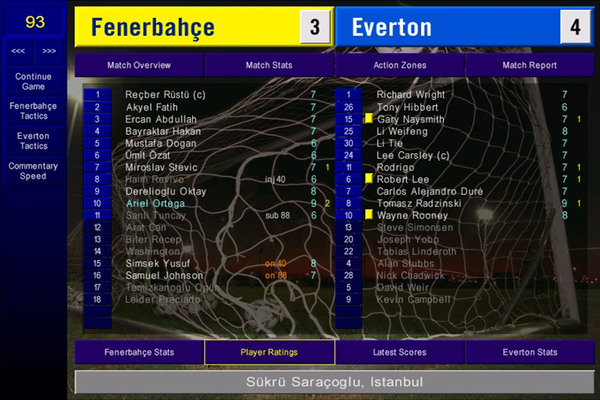 Rodrigo has been playing too well, it seems. Hamburg make a bid and the board refuse to allow me to reject it. It took me the better part of a season to get him fit and I’ve finally found him a place in the team where he can really express himself. And for what? With heavy heart and tears in my eyes, I click to accept their revolting, morally-bankrupt, act-of-a-weasel bid of £2.7m. 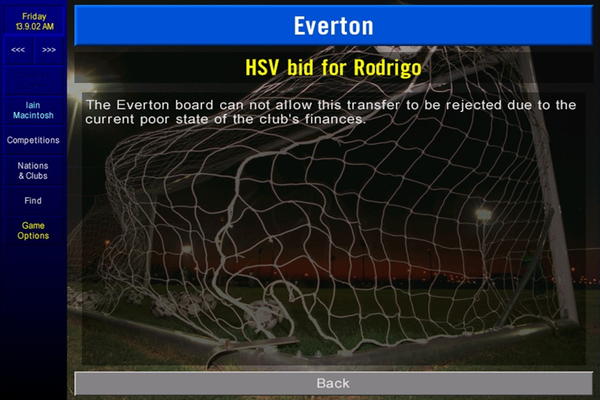 That brings the debt down to £23m, but we’re still in trouble. We do, however, have £475,000 left in the transfer kitty and this seems as good a time as any to spend it. We’re obviously very limited in what we can purchase, but after a good search through the database, Micah Hyde emerges. He’s a good all-rounder, he’s out of favour at Watford, but his ratings for the reserves are very high. A bid of £400,000 is duly made. But before we find out how that goes down, we have our first home league of the season against Aston Villa. 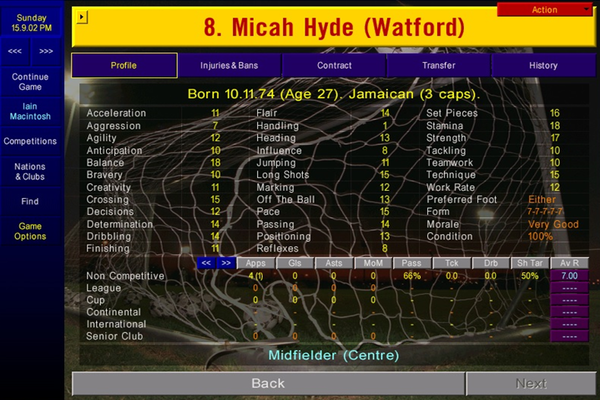 Now under the leadership of former Spurs boss Hoddle, Aston Villa narrowly avoided relegation last season and have started this campaign well, with ten points from four games. Hoddle spent big in the summer bringing in Bobby Petta and Claus Jensen, so they have to be respected. Tobias Linderoth comes in for the departed Rodrigo, but I’m not making unnecessary changes to a team that just scored four in Turkey. 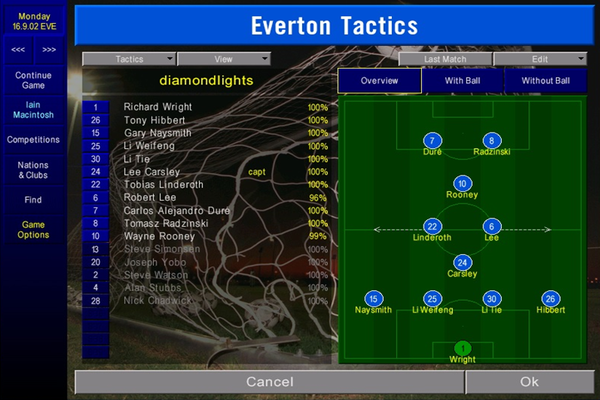 Finally, we have our first league victory. And the scoreline flatters Villa. We have all of the play, we create the most chances by far and just when it seems that we’re going to feel the sharp edge of Madam Fortune’s tongue, Lee Carsley steps up and heads us back into the lead. Villa were good, far better than they were under Graham Taylor, but we should have won that by a significant margin. But who cares? The first points are on the board.

No sooner have the board told me that they’re delighted with my performance, Hyde tells me that he wants to sign. And that he wants to impress me. I like this kid. I like the cut of his jib. He’s certainly more help than Duncan Ferguson. 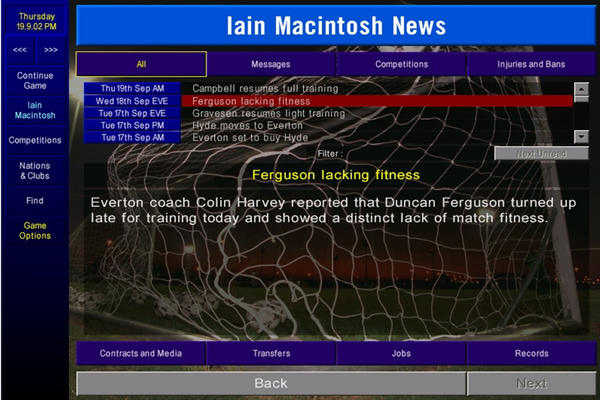 The funny thing about Duncan is that he’s our highest earner on a whopping £27,000 per week. And he’s still got two-and-a-half years on his contract. And he’s angry. This isn’t helping. 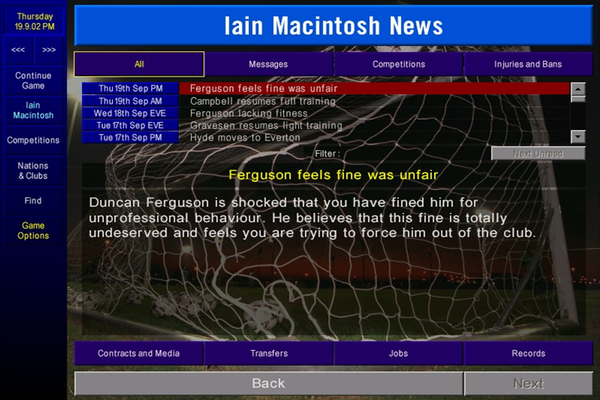 I tell you what else isn’t helping and that’s the continued piece-by-piece closure of Goodison Park. Health & Safety have been back for a third time and they don’t seem to like us. Capacity is now down by over 12,000 seats. We can’t even get 30,000 through the door. There are times, you know, when I feel like I’m fighting a losing battle here. 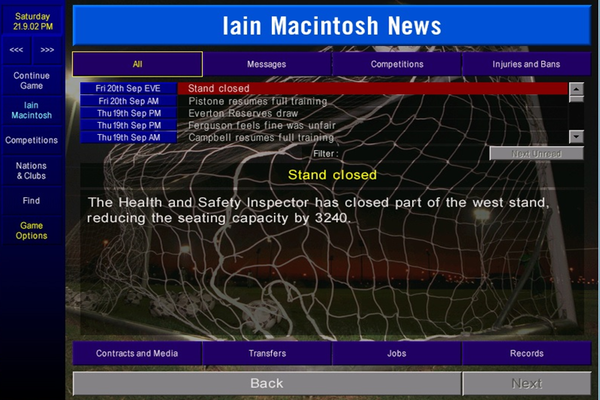 This season hasn’t been any nicer to us on the pitch. Some easy games would be nice. Instead, we’ve got Leeds United. Still under the aegis of Terry Venables, they would have been furious that we snatched that last Champions League place away from them and doubly so that we wasted it by screwing up the qualifying round. They won the UEFA Cup last year, but the only business of any kind that they’ve done is to buy Charlie Miller from Dundee United for £4.7m. Looking at their teamsheet, perhaps they didn’t need to strengthen… 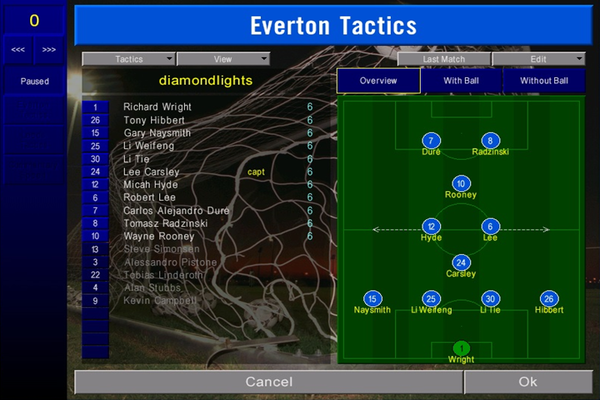 We tried. That’s the most that can be said. When you go two goals down in your newly reduced stadium, having been forced to sell players and replace them with second-flight reserves, all you can do is try. We got back to 2-2 and then lost it in the closing stages. I can’t be angry at them. There’s no point. They’re all I’ve got. 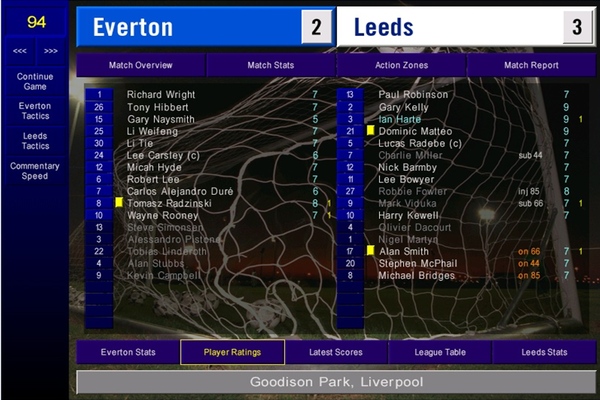 The next day, Ferguson turns up late for training again. I fine him again. I suspect that neither of us cares. We’re just going through the motions, like a middle-aged couple mechanically thudding themselves to joyless orgasm after a Saturday night spent silently downing drinks in the corner of a pub they both hate.

More good news, we’re really blessed right now, comes later when the League Cup draw sends us to Old Trafford. That’s why they call us ‘the luckiest club in the world’. We’re back in action four days later, the second leg of our clash with Fenerbahce. There’s no point making serious changes. There’s not much to change. Let’s see if we can bring some joy to our sub-30k crowd. 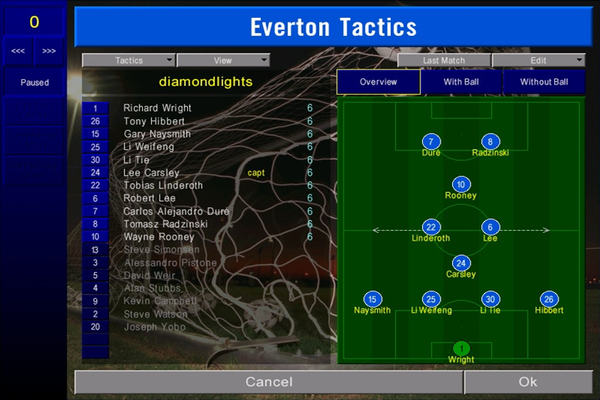 No. No, we can’t. We play the better football, we have a dozen chances, we miss all of them and we concede a goal every other time Fenerbahce shoot. Oh, and Tony Hibbert is out for a month. September isn’t quite over, but it is for this week. 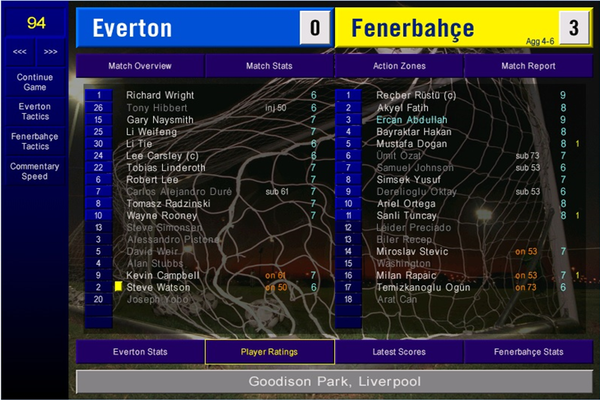 There are some days when you just have to save the game, for we are gentlemen, close the laptop and walk away. Two weeks ago, we were filled with promise and potential. Now it all feels very different. It is alarming how swiftly euphoria can melt away into despair. But if a saviour was coming, they would have made their presence clear by now. We’re on our own. We’re on our own and the darkness is closing in. 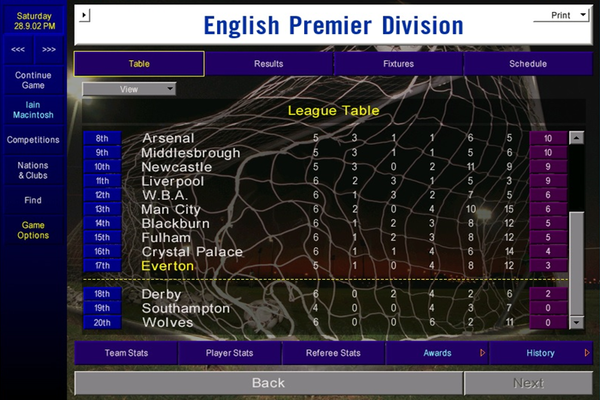