The rot must be stopped. After a bright start to the season, Everton have lost three games on the bounce. Three winnable games. West Ham are so bad that they’re considering the future of Glenn Roeder, but they beat me. Bolton Wanderers are deceptively good, but should still be stoppable. They beat me. Ipswich play odd tactics and are a second flight club. But they beat me on penalties. Ordinarily, in these pre-transfer window days, you’d dip into your savings at a time like this and comfort-buy a new player. But we’re bankrupt, so that’s out. All we can do is make do and mend. We’ve done well through being defensive and crafty, so that’s how we’ll continue. And it’s not all bad news. Next up is Charlton at home.

Charlton are rubbish. Alan Curbishley plays formulaic 4-4-2 with attacking full-backs, but to little effect. However, they’ve got a pair of quick strikers in Shaun Bartlett and Jason Euell and their signing of Cambridge’s starlet Tom Youngs is a worry. I wanted him. We’re in poor form and we need to be careful, but a balance can be struck, especially now that top scorer Tomas Radzinski is fit again. It’s back to 4-3-3 with short passing and hard tackling. 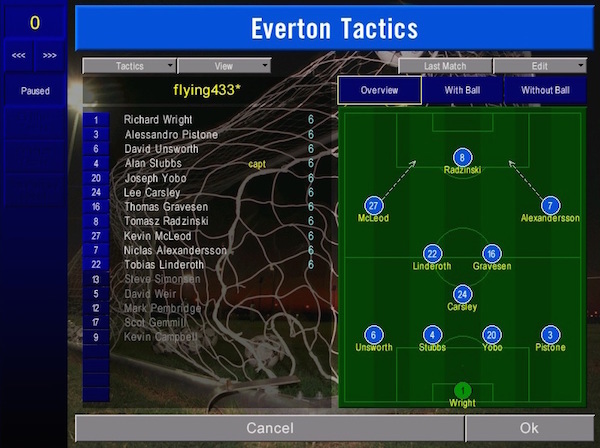 An early flurry of Charlton activity forces an early tinker; an instruction to Alan Stubbs (Pace 3) to stay deep. I should probably set that as standard, but I’m scared of hurting his feelings. It works. Charlton are all but nullified, their only impact on the game is through Scott Parker, who kicks anything that moves and somehow stays on the pitch. Radzinski wastes five chances before he finally breaks the deadlock in the 34th minute and we go in at half-time in a positive frame of mind. Ten minutes into the second half, Thomas Gravesen smashes home another free-kick. That will do for me. It’s back to 4-5-1, on comes the steadying presence of Mark Pembridge (Pace 2) and we shut the game down. A 2-0 victory and the run of defeats is over. That’s seven wins from 12 games, and no draws for some reason. Another five victories from the final 26 games and we’ll stay up. We’re sixth in the table, but yes, that’s still how we’re thinking. 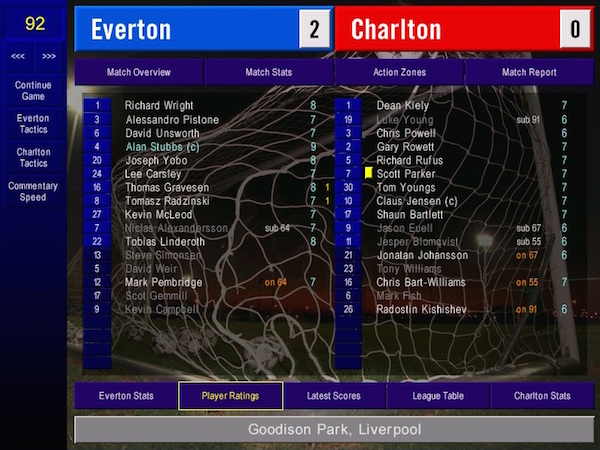 Up next, it’s Gary Megson’s West Bromwich Albion and they’re doing surprisingly well, tucked just behind us in seventh. They play 4-4-2 as well, but with Derek McInnes dropping back and with the flair of Jason Koumas out wide. Daniele Dichio has scored four in four, so they’re certainly a threat. Nevertheless, we’ll keep with the same tactics. We’ve beaten Southampton and Birmingham away from home with that gameplan. Granted, the Baggies are actually quite good at football, but we’ll take a little bit of a chance here, albeit with Niclas Alexandersson and Kevin McLeod man-to-man marking their full backs, Neil Clement and Igor Balis. 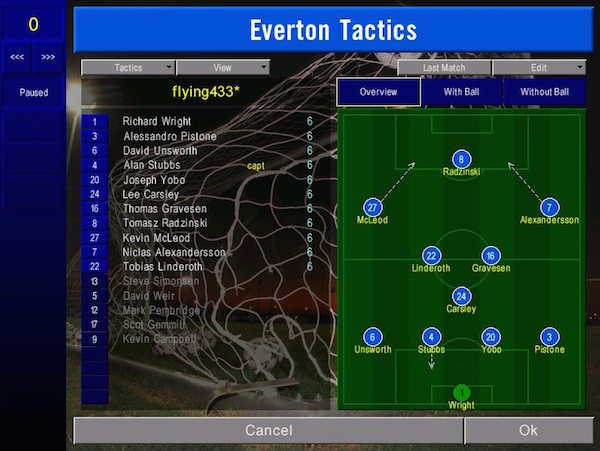 “When it’s a battle, you fucking battle,” said former Peterborough boss Steve Bleasdale and truer words have never been spoken. Megson’s men are right up for this and they come at us again and again. McLeod can’t get anywhere near Balis, Uriah Rennie books Gravesen and Tobias Linderoth in the first 20 minutes and, though we take the lead through Radzinksi, we’re very lucky to go in level at the break. Off comes McLeod, on comes the more conservative Pembridge and the second half is a far calmer affair. Then it all kicks off. McInnes is dismissed for a second bookable offence, Gravesen finds Radzinski from the resultant free-kick and all of a sudden, we’re 2-1 up. And yes, we shut the game down again. We’re not in the entertainment business, you know. 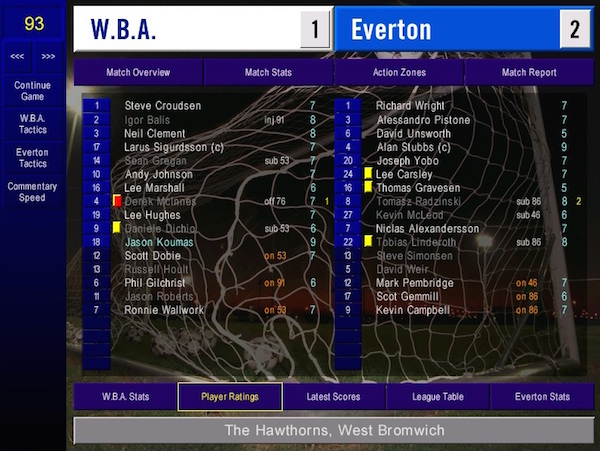 Poor Glenn Roeder isn’t in business at all now. His victory over my team was the only one he conjured up all season and he’s the first Premier League managerial casualty. Farewell, my friend. 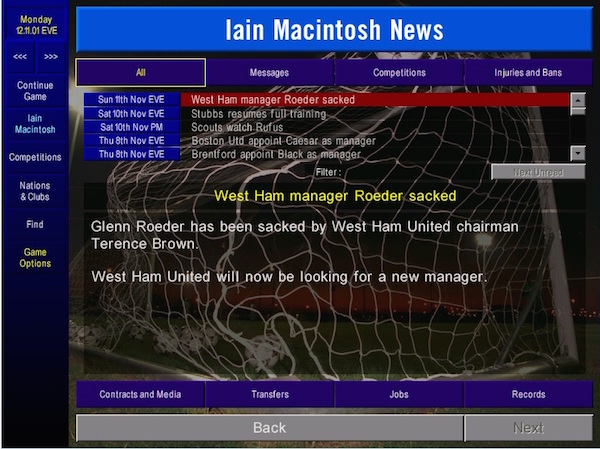 Middlesbrough’s Steve McClaren won’t be joining him in the dole queue though. He’s so perfectly average, chairman Steve Gibson probably hasn’t even noticed he’s there. Boro are locked in 12th with six wins and six defeats. They’ve got good players, but fortunately most of them are injured. There’s no Juninho, Mark Schwarzer, Allan Johnston or Carlos Marinelli, though there is still the small matter of Alen Boksic. But we’re two wins from two, this is Goodison Park and there will be no changes here. Except that Noel Whelan cuts in wildly from the left wing, so we’ll detail Lee Carlsey to show him who’s boss around here. And he’ll show him with studs. Perhaps Alessandro Pistone can do something with the space Whelan leaves… 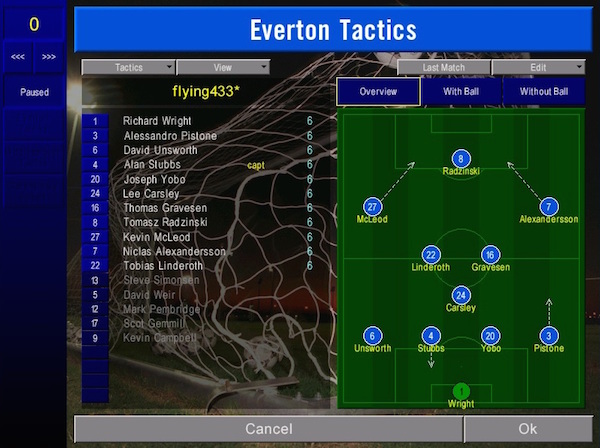 Little wonder that Middlesborough are so inconsistent. McClaren changes his tactics every ten minutes. A more comfortable, laissez-faire manager than myself wouldn’t mind so much, but here at Everton we mark the man and we micro-manage. Every time McClaren tinkers, there has to be a response. As a result, this is an epic battle. Strangely, Boro aren’t actually very good. Stubbs puts Boksic in his pocket and, one by one, Carsley shuts down every one of the four attacking midfielders that McClaren deploys and then goes off to score for good measure. With a narrow lead, but clear dominance, shutting the game down is an unnecessary risk, so we continue as we are. Unfortunately McLeod and Alexandersson choose the same day to turn sour and Radzinski is starved of possession. I’d make changes, but I can’t. There aren’t any other widemen in the squad. But it doesn’t matter. We hang on. We win again. And we’re third. This is weird. 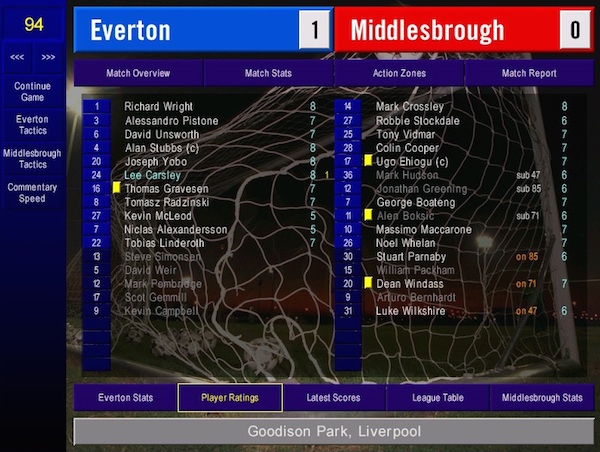 Given that there’s no point doing any scouting, more time has been devoted to the reserves. Chinese pair Li Weifeng and Li Tie looked so poor in pre-season, they’ve been used as a centre-back pairing here and they’re steadily improving. Neither of them can speak English yet, but I wouldn’t be able to speak Mandarin in five months either, so it’s best to be patient. Duncan Ferguson has also been left here to get his confidence up, but to no avail. Not only is he still offering up 5s, but he injures himself at the end of the month and is out for another four weeks. Because of the lack of attacking cover on the flanks, Wayne Rooney is on a training programme that should give him the ability to play wide on the left, because what we really need here in our alternative reality is another What Is Rooney’s Best Position debate. So far, it’s still centre-forward. But he’s only 16, so there’s plenty of time yet.

The month ends with a trip to Old Trafford. In terms of squad strength, Manchester United are one of the best in the game, but they’ve dropped a lot of points this season, drawing five games and losing two. But despite all of that, hubris has been a problem for us this season. We went too aggressive against Sunderland and paid the price. We didn’t give West Ham enough respect and paid the price. We’ll shut this down from the start and hope that Radzinski can do something on the break. I know that we’ve got 27 points on the board and that with 24 games left to play, we are probably going to be okay, but that’s no reason to be silly. A point here would still be a fine result. Saddle my Mark Pembridge. 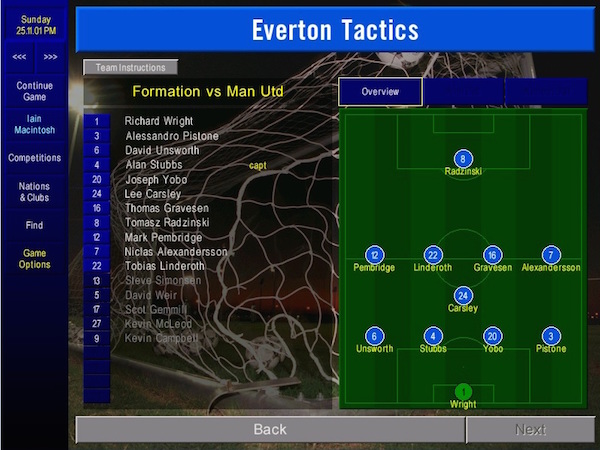 If ever there was a game to epitomise what we’ve done here, it’s this one. For 26 minutes, we stop United from playing by putting both Carsley and Gravesen on Juan Sebastian Veron, but then Richard Wright clips Ruud van Nistelrooy’s legs in the area and everything seems to goes wrong. He’s sent off and even though Steve Simonsen saves the penalty, we’ve had to sacrifice Carsley. Van Nistelrooy atones for his error before half-time with a fine header and it’s all looking pretty gloomy. But within three minutes of the restart, Pembridge heads home an equaliser from a Gravesen free-kick. Then we lose Radzinski to injury and it all looks glum again. Kevin Campbell trots on, Gravesen sends in another free-kick, and we’re 2-1 up with ten men at Old Trafford. What a time to be alive. It’s too much to ask for the score to stay that way. Veron eventually equalises, but thanks largely to Simonsen, that’s the way it stays. Our first draw of the season and yet it’s arguably our most impressive result. It might be our last impressive result for a while too. Radzinski is out for three weeks. 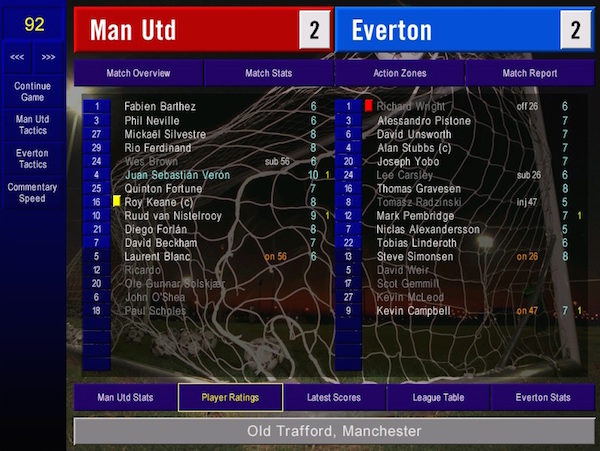 Sir Bobby Robson wins the Manager of the Month award, but with all due respect to the man, I cannot imagine what he’s done to deserve it more than me. Not that it’s about individual baubles, but for the love of Hibbert, I’m moving mountains here. Still, mustn’t grumble. The league table does look good. 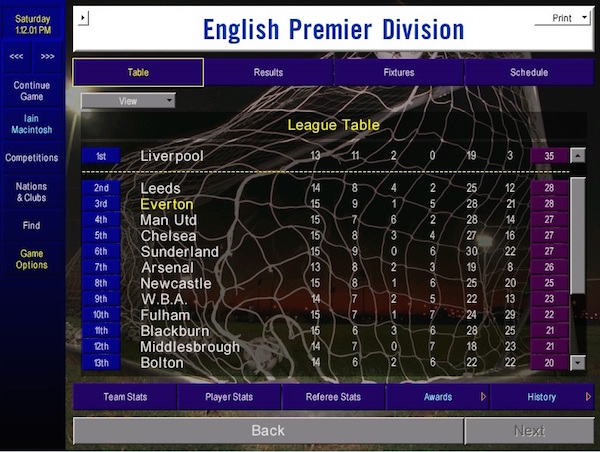 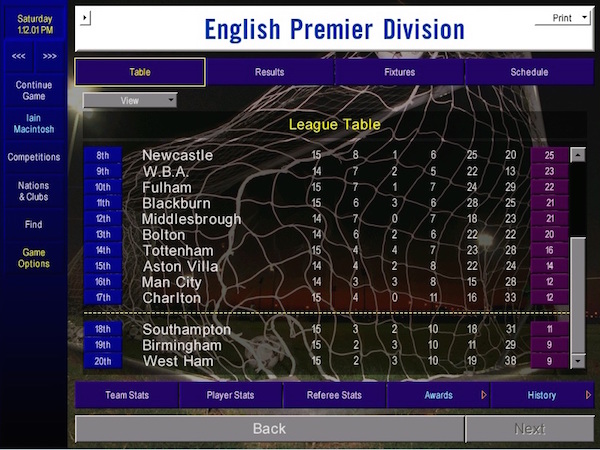 Winter is coming. December will bring Sir Bobby’s Newcastle, Chelsea, Aston Villa, Arsenal, Liverpool and, as light relief, Southampton. All I can say is that it’s a good job we picked up the points this month.

Dear Santa, all we want for Christmas is a new owner who can clear £33m of debt from the books and maybe chuck us some cash for two new world class wingers. Is that so much to ask?