And so we march into the final third of the season knowing full well that we won’t get relegated, that we won’t win the title and that, with our disciplinary record, we’re unlikely to win any fair play awards. Our financial situation means that we’re still in complete limbo, unable to sign players, unable to prevent players from leaving and, more pertinently, unable to formulate a strategy for next season. But we march on because that’s all that we can do.

Oh, to be in Sunderland’s position. Financially secure and settled in fourth place under the calm stewardship of Howard Wilkinson. Between them, Kevin Phillips and Tore Andre Flo have scored 28 goals. On the right flank, Matthew Piper is making a strong case for Young Player of the Year with 13 assists and an average of 7.67. But we chanced upon a diamond formation in January that secured six points from six and there’s no point changing a winning side, is there? 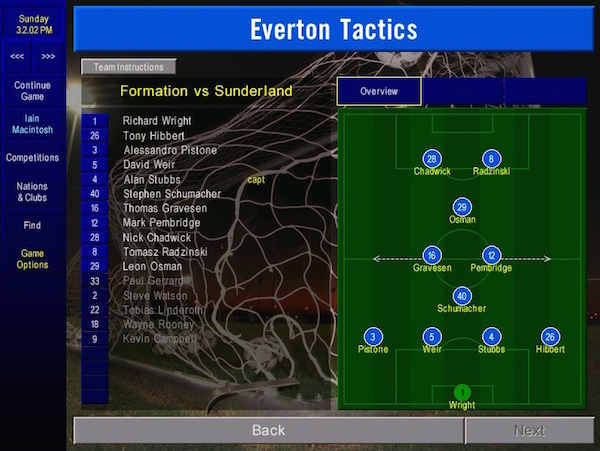 A useful and yet strangely unfulfilling win. Judicious use of man marking had kept Sunderland quiet, but we didn’t carve out a chance of note until Thomas Sorensen wiped out Tomas Radzinski in the penalty area and earned himself a red card. The Canadian hotshot stepped up and converted his 13th goal of the season and that, pretty much, was the ball game. Sunderland didn’t recover and Thomas Gravesen added another midway through the second half. We have reached the 40-point mark and we’ve won three games on the spin. But we’ve played better than this and lost. 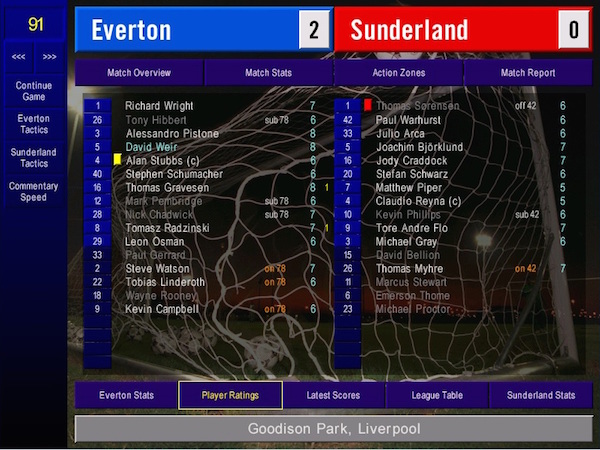 Up next are Fulham, matching us stride for stride and exchanging confused looks with us in the top half of the table. Young Steven Schumacher’s performances have dropped and his morale is rock bottom, so there’s a recall for Thomas Linderoth. We’ve also used the midfield four to man-mark Fulham’s midfielders, leaving the full backs free to push up. Let’s see if it works. 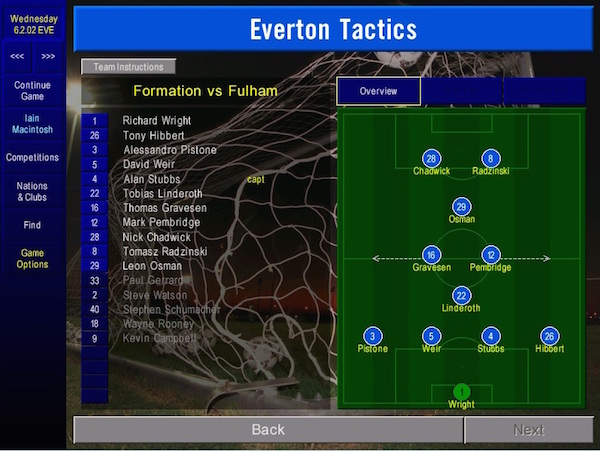 It doesn’t work. Fulham dominate possession. Jon Harley causes all kinds of issues down the left and Sylvain Legwinski gives Jean Tigana’s side a deserved lead. We tear it all up at half time and return to 4-3-3 in an effort to regain control of the midfield. Wayne Rooney’s training has given him the capability of playing off the left flank, so he comes on at half-time to make his senior debut, along with Kevin Campbell on the right. Within 60 seconds, Linderoth has levelled the score and we batter them for the rest of the half. It is only the genius of Edwin van der Sar that keeps game deadlocked. Rooney is encouraging on the left, but it’s the overall performance that impresses. That draw, only our second of the season, was more satisfying than the win over Sunderland. 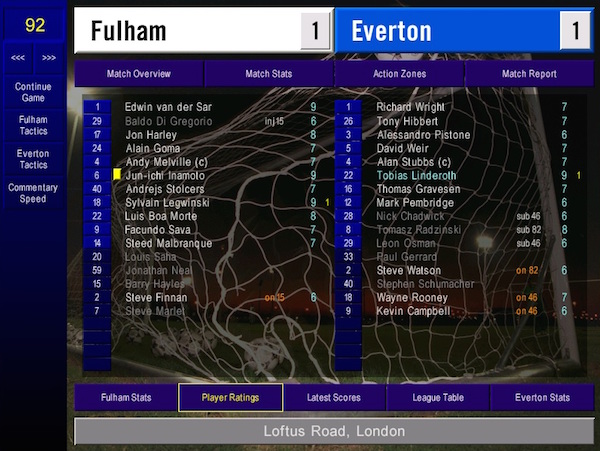 Two bodyblows before our third game in seven days. First the news that Mike Duff is developing into a footballer of extraordinary talents and that no-one’s bought him from Cheltenham yet. Yes, that stings. 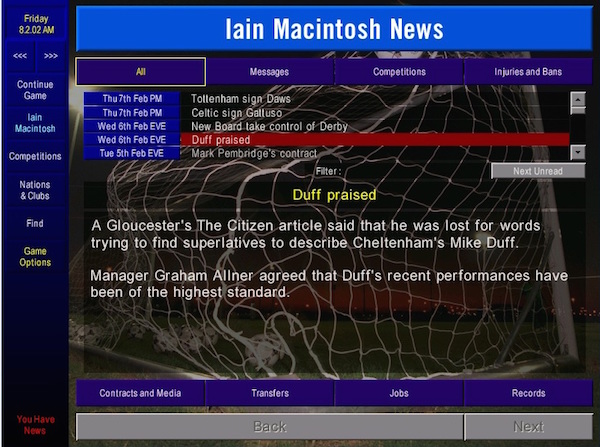 But far worse is the news that Derby County have attracted investment. Why did someone buy them and not us? We’re in the top half of the Premier League! Where are our rich foreigners? 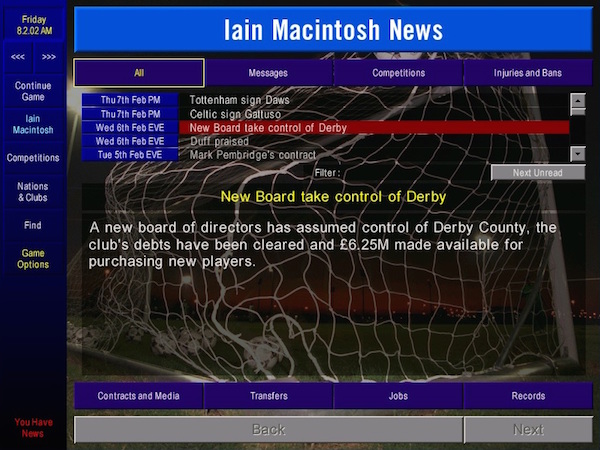 Still, nothing cheers a manager up like West Ham at home. Danny Wilson’s arrival at Upton Park has done nothing to improve the fortunes of the Hammers and with just three wins all season, they look certainties for the drop. Same formation, same players. Same result? 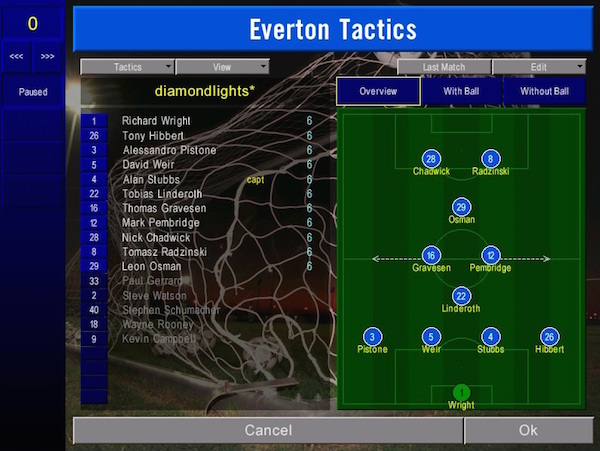 Yes, but it wasn’t all comfortable. That diamond formation brought only a handful of chances. Nick Chadwick, on the fifth time of asking, scored his first goal for the club, but West Ham were not quite as miserable as I’d hoped. Half-time brought a shift back to 4-3-3 and the introduction of Rooney and Campbell. That did the trick. Chadwick added another and Wilson’s side collapsed. That’s 13 points from a possible 15 now and we’re up to seventh. 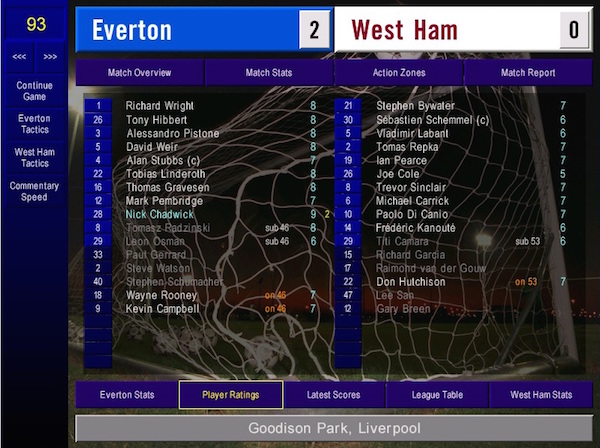 Since Frank Rijkaard rocked up at White Hart Lane, Tottenham have been on the mend. Five straight wins have lifted them to tenth and the weird, unsuccessful formations of Glenn Hoddle are a thing of the past. With Robbie Keane in the hole, it’s still a good idea to play a defensive midfielder, so we’ll hold with the diamond for now. Naturally, there are no personnel changes. We haven’t been beaten in six weeks, why change now? 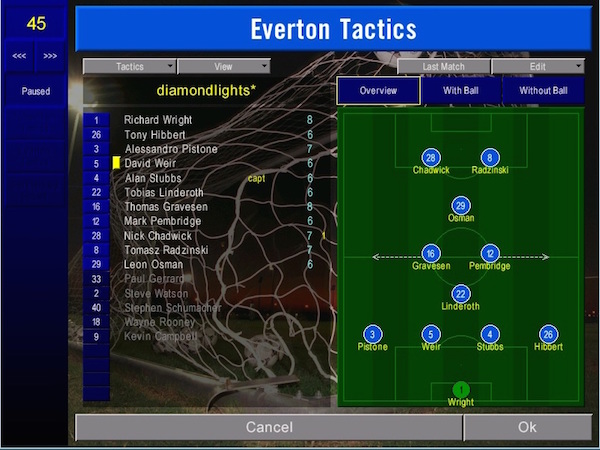 There are no tactics that can stop Teddy Sheringham. He’s only 35 and a typically deft header gives Spurs the lead early on. But young Chadwick is on a roll and he equalises just before half time. Radzinski takes advantage of some slack marking from Chris Perry to put us in front after the break. That’s it from, Spurs. They have no answer to our two-pronged attack. Another win, and we’re now riding high in sixth. And Lee Carsley’s back! What a time to be alive. 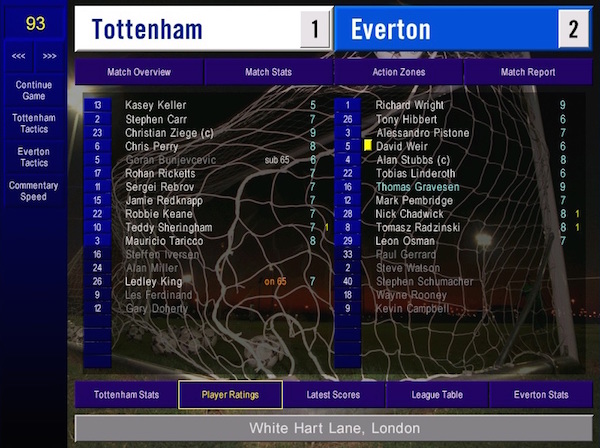 The good news keeps on coming. I’ve had this chap in my reserves all season with a nasty knee injury. Never heard of him, but his stats look good. 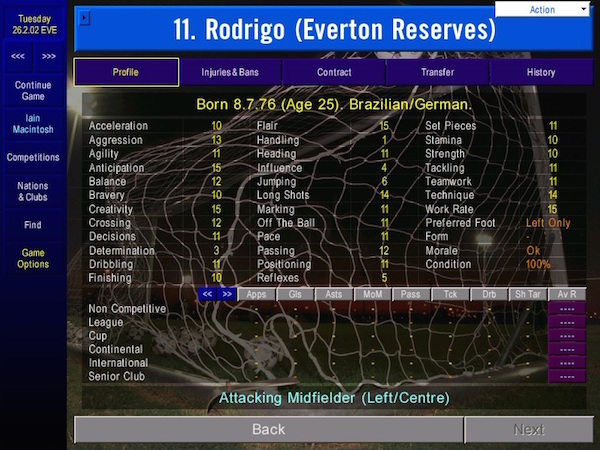 Could he be the wild card to maintain our run into the final ten games of the season? Probably not, but it’s nice to go through life with a little bit of hope, isn’t it? And the league table probably won’t look like this for much longer. 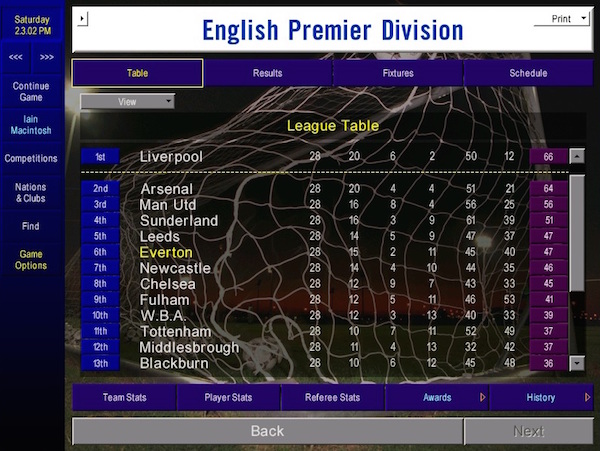 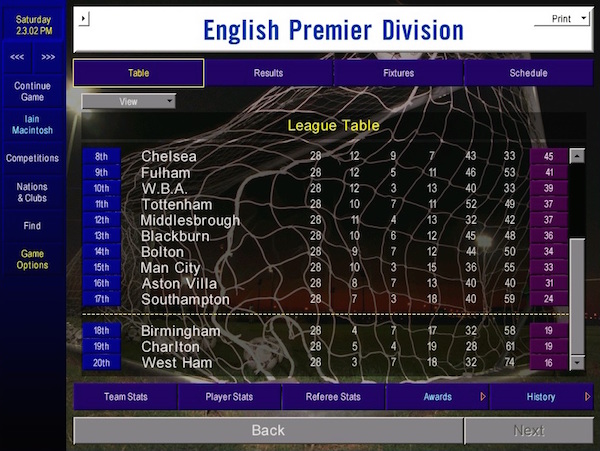 So, can we continue this extraordinary series of results? Will someone finally buy the club and give me some money?