And so to April and four more games for my gossamer thin squad of pitbull-faced heroes. In years to come, men will tell their children with pride that they stood in Goodison Park, the bit that hadn’t been closed down by Health & Safety, and cheered for Lee Carsley and Thomas Gravesen. How they roared with approval when Tomasz Radzinski scored, and how they fell silent in admiration of a young Tony Hibbert. These, my friend, these are the golden years we shall reminisce over upon a sun-scorched bench with our walking sticks by our side. But for now, it’s time to play Bolton Wanderers.

Bolton are bastards. They play with an awkward attacking 5-3-2 that you can only counter if you give up any ambition of making any headway yourself. You have to man-mark everyone, particularly Youri bloody Djorkaeff. But we have a secret weapon of our own. In light of the continuing inadequacies of Leon Osman, I’ve decided to give Wayne Rooney his full debut in the number 10 role… 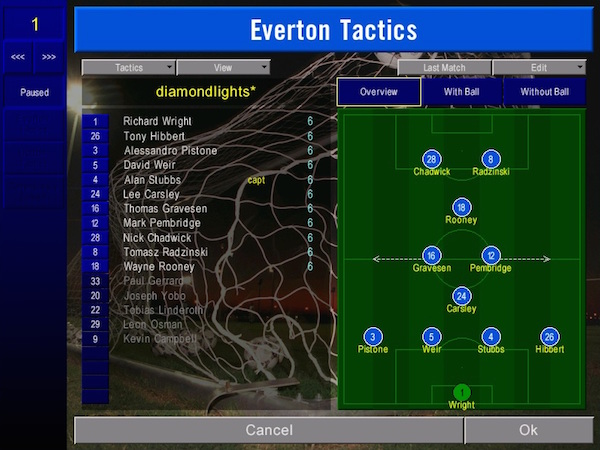 After all the preparation, Bolton take an early lead and, obviously, it’s Djorkaeff who scores. Even Lee Carsley isn’t perfect, though I know that’s a tough concept to take onboard. Naturally, Everton refuse to capitulate. This lot gave up on giving up a long time ago. We’re probably the better team, we’re certainly making more chances and, midway through the second half, Rooney opens his account with a long range effort that leaves Jussi Jaaskelainen grasping at thin air. Yes, I know that Rooney has now been exposed and that other scouts will notice and that if they bid anything, literally anything, we are obliged by our financial status to accept, but with the chance of transformative Champions League football on offer, it’s a risk we had to take. We take a point, but we played well. I’m happy with that. 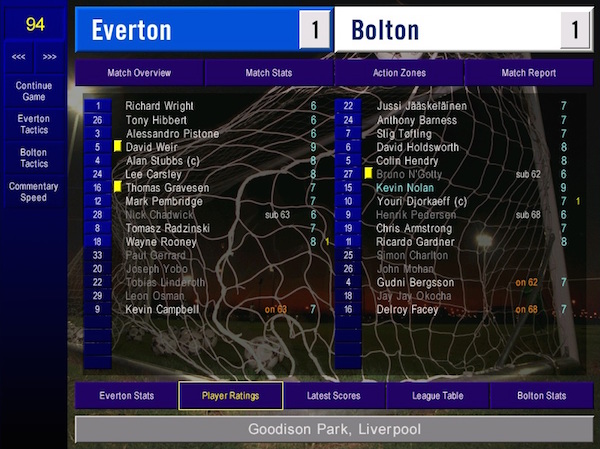 My admiration for Carsley knows no bounds, but I’m delighted to see that he feels the same way. If I’m the King, then he is one of my most valued knights. Or perhaps the King’s chief torturer, pulling out the toenails of my political prisoners. Yes, I think he’d be good at that. 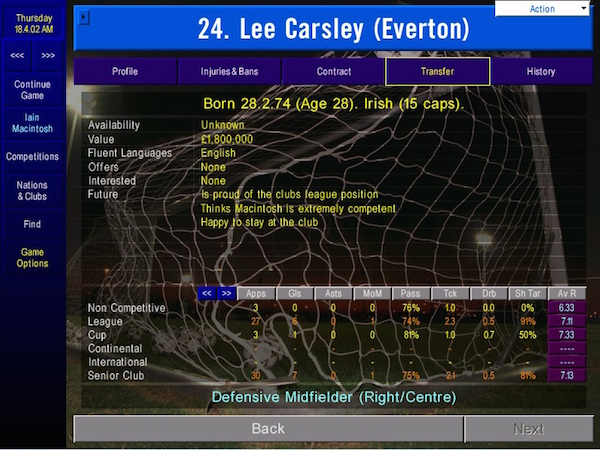 Onwards then to a tricky trip to Teeside where middling Middlesbrough lurk. Our Diamond Lights formation seems to be multi-purpose, able to contain all sorts of opposing formations with judicious use of man-to-man marking and careful control of the full backs. The only change I make is to bring back Kevin Campbell, who has been waiting patiently on the sidelines while Nick Chadwick gets a run in the team. 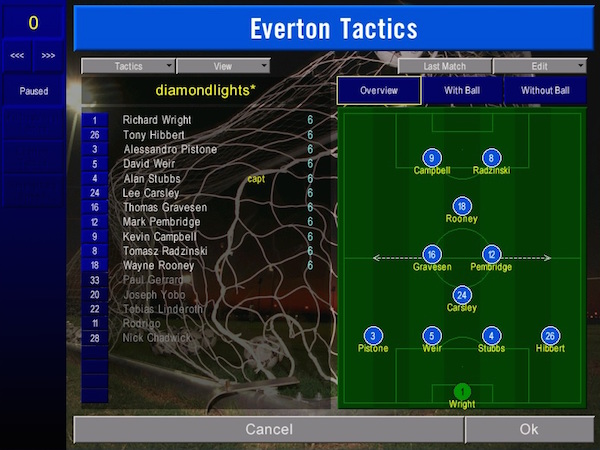 TONY HIBBERT SCORED AND WE RIOTED.

Also, Middlesbrough shot themselves in the foot by losing Ugo Ehiogu to an early red card. But mainly, this was Hibbert’s day. An audacious 30 yarder in the fifth minute. Could it perhaps be the first of many? It was quickly followed by another one from Rooney and then Ehiogu’s dismissal, and so in the 52nd minute the game was dutifully shut down. Annoyingly, Alen Boksic popped up to score with Boro’s first effort on goal in the 54th minute and Carsley was sent off, so the closing stages were a little hairy, but they got there in the end. They got there in the end. 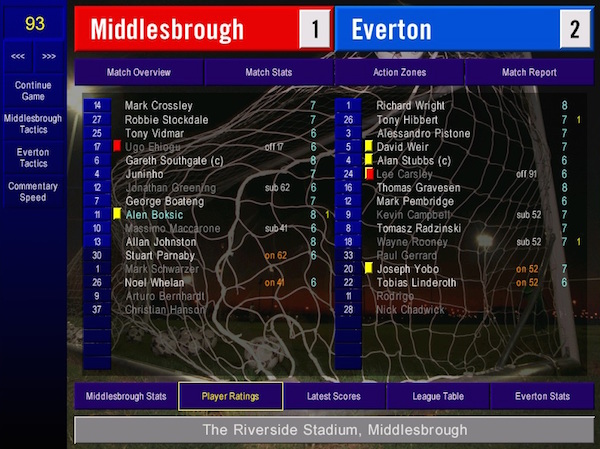 Now, the fixture calendar had been kind to us, thus far. A tough start, but an agreeable mid-period that allowed us to accumulate points and reduce the pressure. But all that was at an end now. Five games left and we have Newcastle and Chelsea this month, then Aston Villa, Arsenal and Manchester United in May. That’s one of the reasons we’ve tried not to get too excited, though we’re starting to build a cushion between us and fifth. But it’s St James Park now and Sir Bobby Robson has so much talent at his disposal. Are we going to change anything? Are we, bollocks. 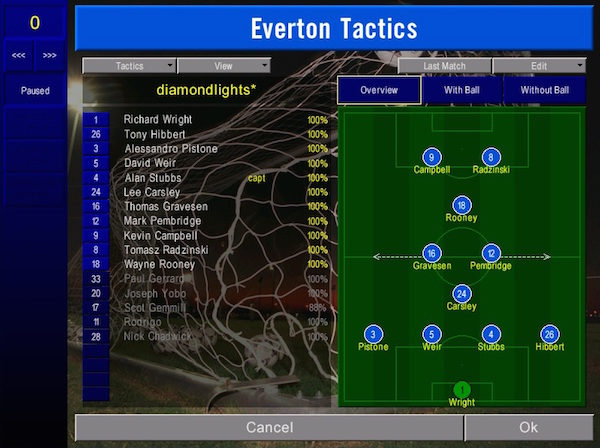 And after all the excitement of Hibbert’s goal last week, we have one for Alessandro Pistone to celebrate. But individual glory plays second fiddle to the success of the group. Never mind securing fourth, we’re only four points off Manchester United in third now. And speaking of Newcastle, there’s an air of Pardew 2011/12 about this team. It’s not that anyone is world class, it’s just that hardly anyone ever lets me down. Look at those numbers! Just look at those numbers! 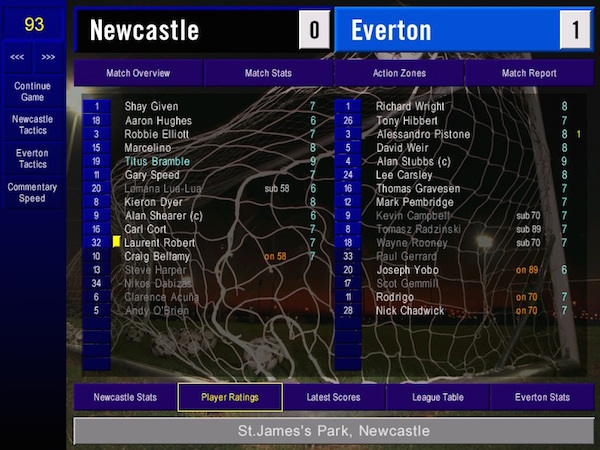 Of course, the trick is to do this week in and week out. And when you haven’t got a squad of options and you haven’t got exceptional players, you’re going to run out of luck eventually. Probably at home to Chelsea in fact, given that they have players like Marcel Desailly and Gianfranco Zola. And almost certainly on a week when you haven’t got Carsley because of what the mad bastard did at Middlesbrough. He has to go and sit in the corner and think about what he’s done. Step right up, Tobias Linderoth. You have big shoes to fill, sir. 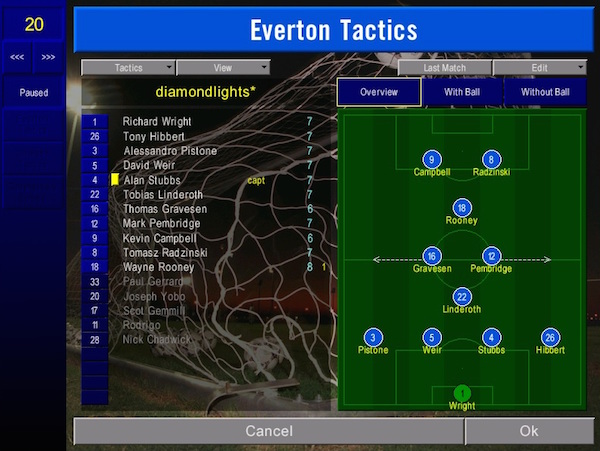 Rooney has hit his stride. He tears Chelsea apart in the first half, smashing two quickfire goals in the first fifteen minutes. Claudio Ranieri’s side come back through Eidur Gudjohnsen, but we take a risk and move to ‘hard’ tackling, incurring yellow cards for three of our four defends, but somehow holding out until full time. This is an outrageous run of form now and I can’t stop grinning. There is nothing that can ruin my mood now. Nothing. 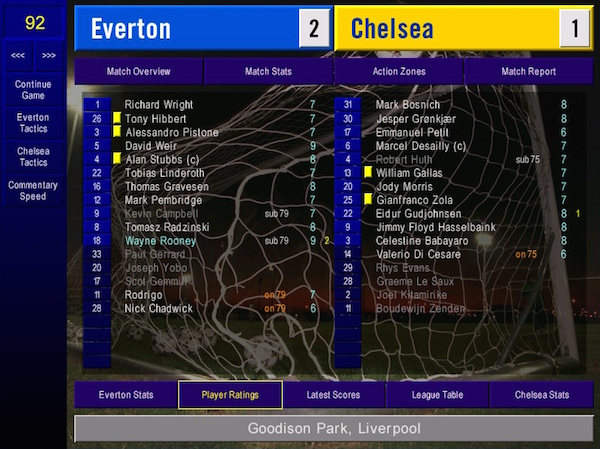 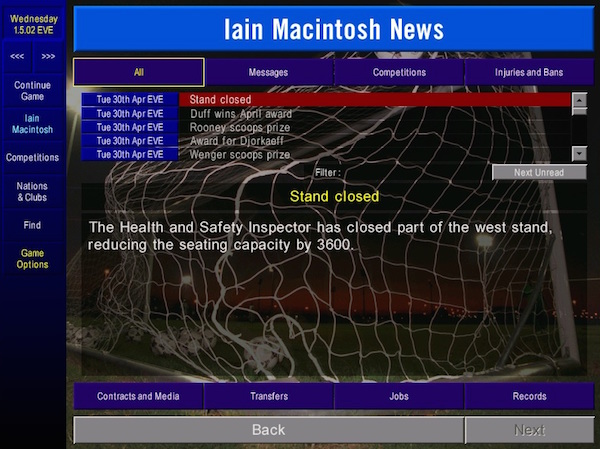 Oh, for fuck’s sake. Not again. 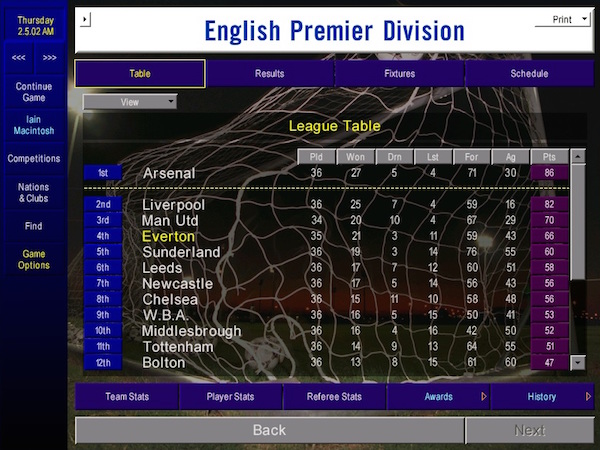 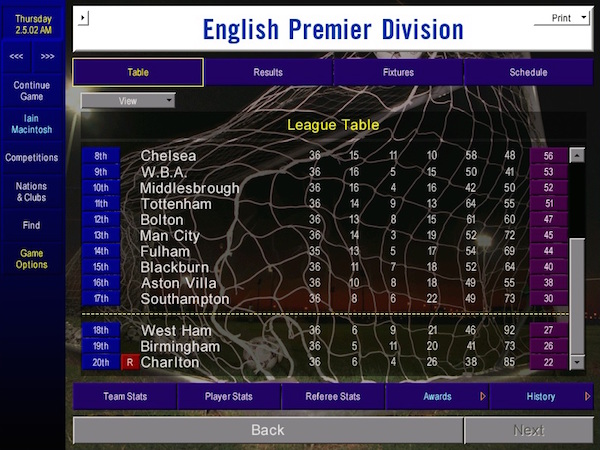