A stunning run of form through November has seen us roar up the table to third place, but it should be noted that they we’re yet to play all of the seriously good teams. Back in 2001, Arsenal and Manchester United reigned supreme while Liverpool, Leeds, Chelsea and Newcastle generally made up the chasing pack. And we’re playing three of those teams in December.

First up are Newcastle, a better team than their eighth position in the league suggests, but languishing back there because they’ve suffered so badly from injuries. Alan Shearer, Craig Bellamy and Laurent Robert are all out, but that still leaves the pace of Lomana Lua-Lua, the strength of Carl Cort and a young Kieron Dyer in something of a free role in the middle. Even though we’re at home, we need to be cautious. It’s back to 4-5-1 with Lee Carsley and Tobias Linderoth doubled up on Dyer. 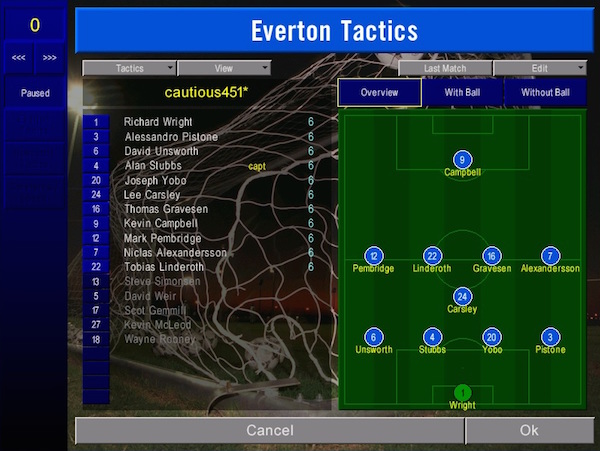 All my plans are laid to waste inside three minutes when Carsley is carried off. He is our light, he is our hope, he is our heart. And now he is crocked. On comes Scot Gemmil and we respond to the blow in the best possible way with an early goal from Mark Pembridge. And we’re not the only ones who suffer from injury. Andy Griffin and Kieron Dyer are both felled in the early stages. Newcastle fire back when Titus Bramble bundles the ball home and, just as I’m pondering a switch to 4-3-3, Linderoth dives in with a two footed tackle on Clarence Acuna and is promptly shown a straight red card. There’s no let up in the second half. Speed puts Newcastle 2-1 up from the restart, but Thomas Gravesen goes on a solo run and smashes home an equaliser five minutes later. But it’s all for nothing. With eleven men, we might have a chance. With only, ten, we’re torn apart. A brace from Lua-Lua and a header from Diego Gavilan sees us lose 5-2 down in front of our own fans. Carsley is out for two weeks. It’s really not been a good day. 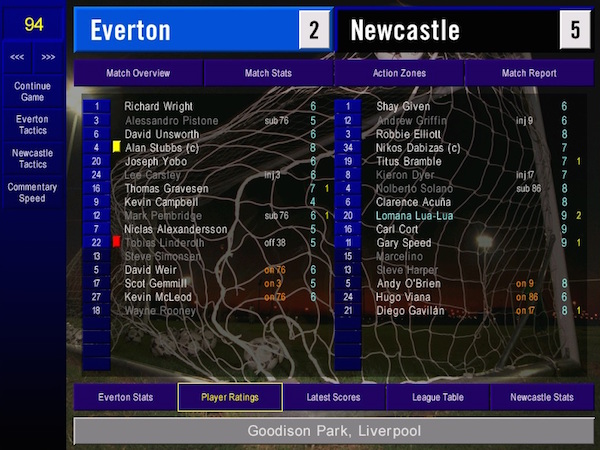 Next up are Claudio Ranieri’s Chelsea, who are eight points off leaders Liverpool and play with an attacking 3-5-2. Ordinarily, I’d tell Carsley to kick lumps out of Gianfranco Zola and go from there, but alas, he’s unavailable. We’re also without Richard Wright, who begins his three-game suspension today. We’ve got Scot Gemmill in the midfield and, well, I’m not looking forward to this. 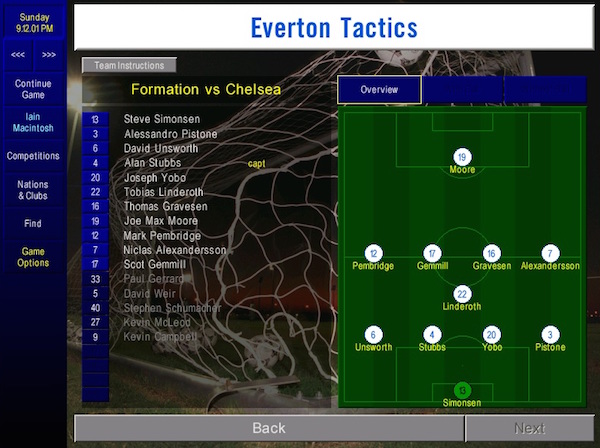 We held out for 70 minutes. We didn’t put a shot on target, we only put a single effort off target and we walked away with a faintly respectable 1-0 defeat. It’s not what I want, but we just don’t have the players. David Unsworth (6.53av) has been wretched, Niclas Alexandersson (6.42av) has been worse and Linderoth’s (6.5av) impending ban would be good news were it not for the fact that the next midfielder in line for a game is 17-year-old Stephen Schumacher (6.64 av for the reserves). I’m also disconcerted by the fact that Celestine Babayaro got a 10 for his performance today. You don’t see too many 10s. 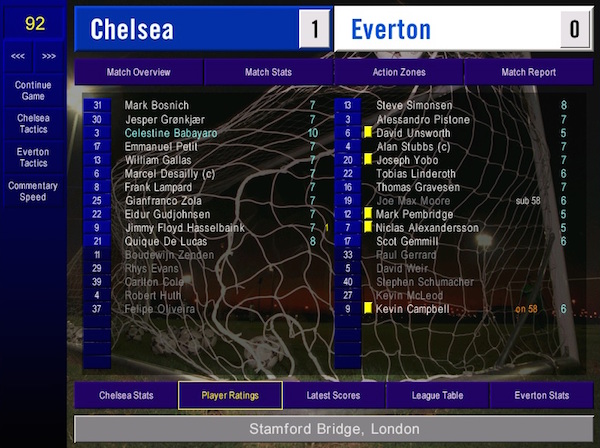 As we approach the turn of the year, I’m informed that a number of our players are drifting out of contract. Scot Gemmill is one such player, but I’m not sure he’s done enough for a new deal… 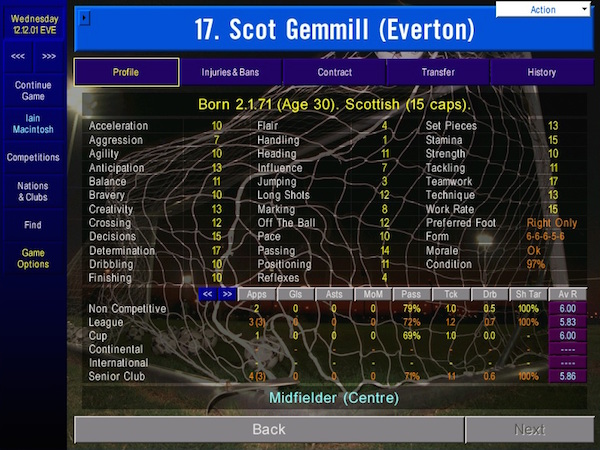 Not that his failings have prevented him from making the first team. We’re Everton, we’re broke. We’ll pick anybody as long as they can walk. With Carsley crocked and Linderoth suspended, we’re forced to pick young Schumacher for the first time. Kevin Campbell returns to the starting line-up after Joe Max-Moore wasted his chance against Chelsea. Villa play a 5-3-2 with two attacking midfielders in Lee Hendrie and Mustapha Hadji, so though I begin in the standard formation, it’s not long before I drop Gravesen back to help Schumacher out. 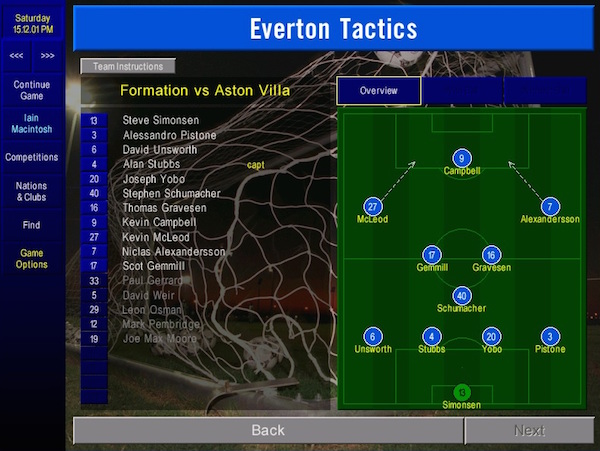 It’s a win, and God knows we needed one, but it comes at a cost. Pistone and Alexandersson are both carried off and will miss the next two weeks. We’re running out of players. Villa take the lead against the run of play, thanks to a neat finish from Juan Pablo Angel, but there’s no panic in the ranks. Substitute David Weir equalises shortly after half time and the soon-to-be-doomed Alexandersson smashes home the winner on the hour. Villa are offering little in the way of counter-attacks, so I bring on Mark Pembridge and shut the game down. That’s our tenth win and we’re not even at the halfway point. It’s just a bit of a shame that we can barely fill the substitutes bench. 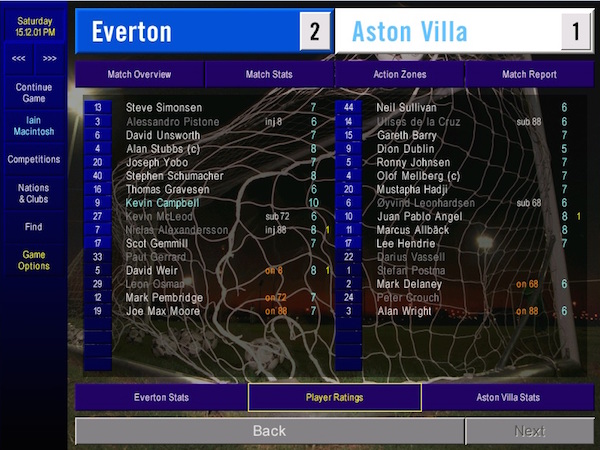 Under Cuddly Ken Bates, Chelsea don’t have the sort of money in this reality that they do in ours, but they’ve got just about enough for the acquisition of some first-class banter. 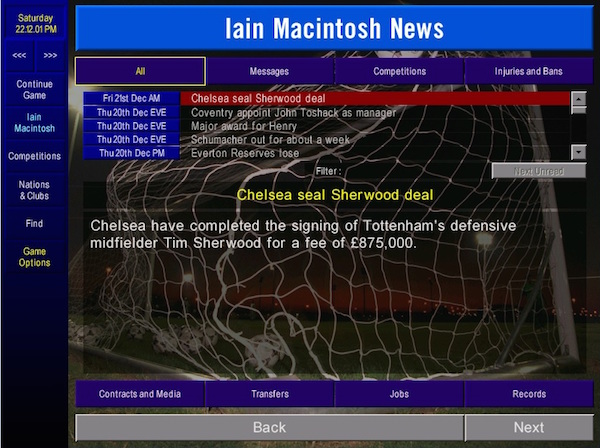 We haven’t got any money at all, of course. This is bad for many reasons, not least the fact that we have to go to Highbury and I’m absolutely terrified of what they’re going to do to us. Just look at the state of this team. With the exception of Rami Shabaan, this is a fearsome force. 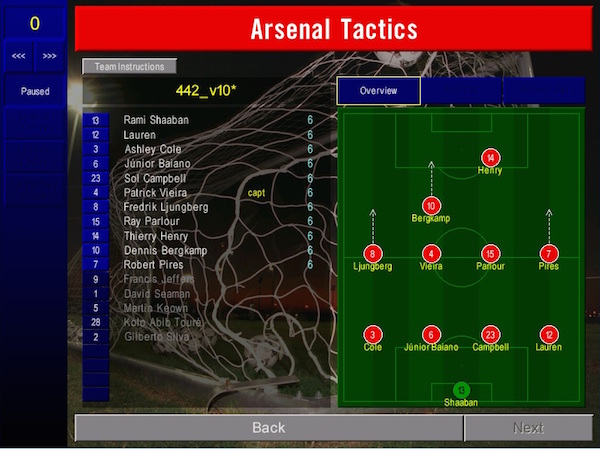 And you know what we do to fearsome forces, don’t you? Yes, we run away and hide behind a conservative 4-5-1, hoping against hope to get something on the break. We put both centre-backs on Thierry Henry, pack the midfield, hide behind the sofa and shut our eyes. 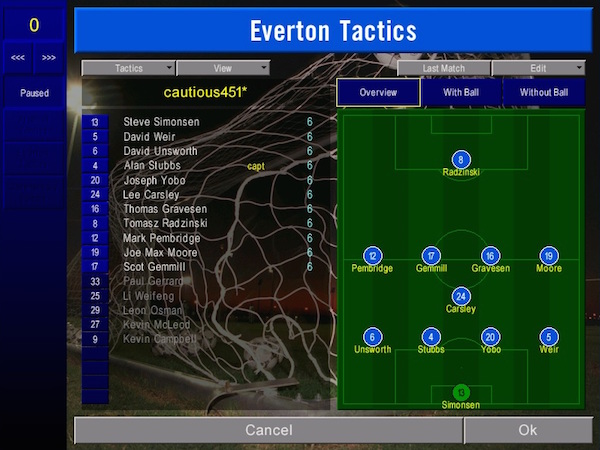 And again, just as it was against Chelsea, we come out with a single-goal defeat. Single-goal defeats give you the same number of points as ten-goal defeats, but they don’t shatter morale in quite the same way. These games have a strange way of drawing out your real personality. You don’t pretend to be someone else in here, you don’t wear your moral positions ostentatiously to prove a point. You are what you are. And I am David Moyes. 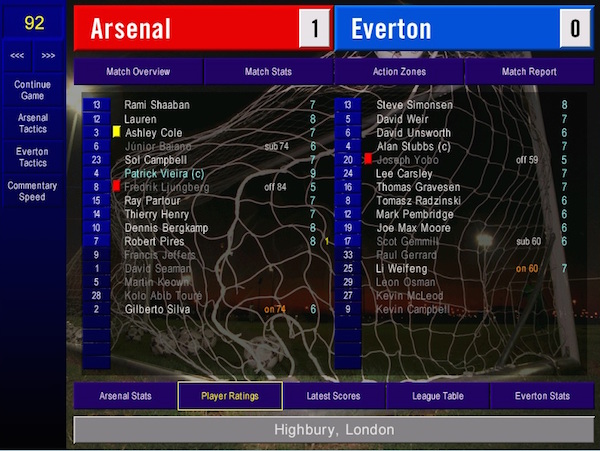 And it doesn’t get any easier. A trip to Anfield beckons where Gerard Houllier’s side are at the top of the table and showing no signs of slowing down. Richard Wright returns from suspension, but Steve Simonsen has been excellent in his absence. Do I allow Simonsen to keep his place or return to my England international goalkeeper? It’s a tough call. Wright is the better goalkeeper, but what kind of a message does it send out if I drop Simonsen when he’s done nothing wrong. After much hearthache, I put the club above the feelings of individuals. Wright returns and we head out at Anfield with our usual 4-5-1 formation. 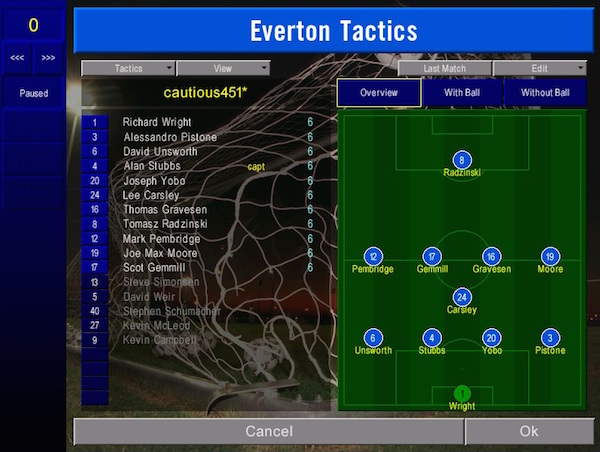 Oh, the pain. Oh, the humiliation. If this was real life, I wouldn’t leave the dressing room at full time. I’d just stay there until they turned all the lights off. I’d stay there until the next morning, rocking backwards and forwards and crying my eyes out. My decision to restore Wright to the team was a disaster. He gives away an early penalty, which is converted, and then makes another mistake for a second goal before half-time. We get back into it through Tomasz Radzinski, but Liverpool turn up the heat and we can’t cope with it. Bruno Cheyrou, the new Zidane, scores a hat-trick and this is all so awful that I have to go for a bit of a lay down. 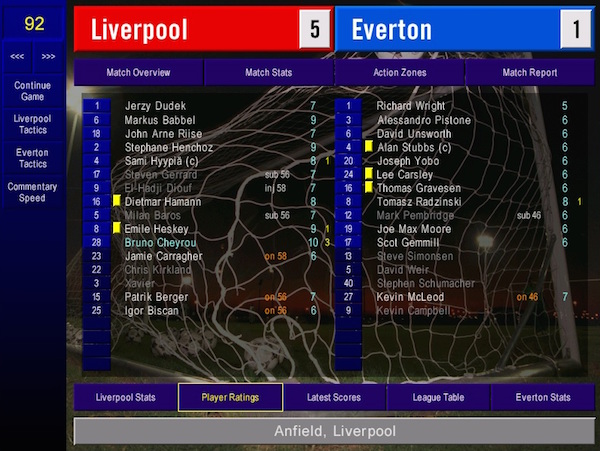 Still, we have a chance to finish the month on a high because we’ve got Southampton – and Southampton are rubbish. They’re 17th, they leave themselves open at the back and we beat them comfortably when we played them earlier this season. Bring back the 4-3-3! Unleash the Gravesen! Put Kevin Campbell on the right wing because he can’t be any worse than Joe Max-Moore! 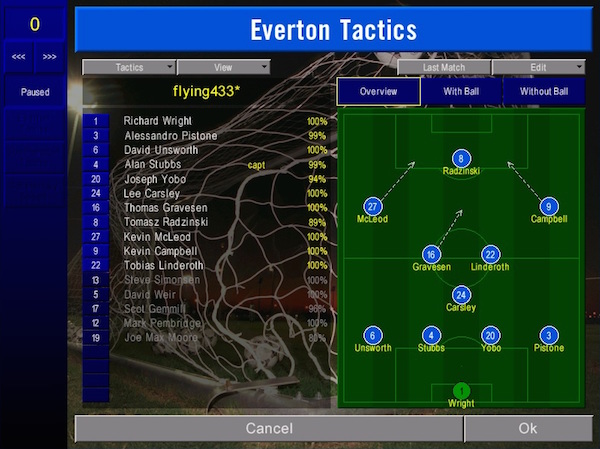 Oh Christ. This is too much. Another bad day for Wright combined with a fantastic day for Antti Niemi and yes, we’ve lost again. We pile on in the first half, peppering them with shots, but to no avail. Then, with crippling inevitability, Marian Pahars twats one home from 30 yards. We get back into it with a long ranger of our own from David Unsworth and once again, dominate the game. But midway through the second half, Pahars scores again and though we continue to create chances, 15 in total, we lose. At home. To fucking Southampton. 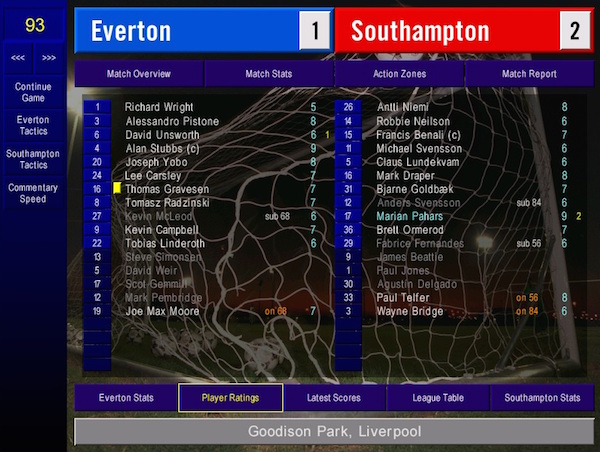 And so from third place in November, we end December down in tenth. All in all, I preferred being in third. And look at Liverpool go! They’ve only dropped six points all season. 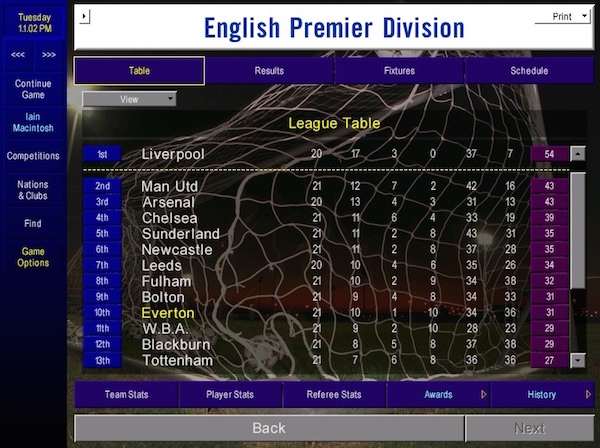 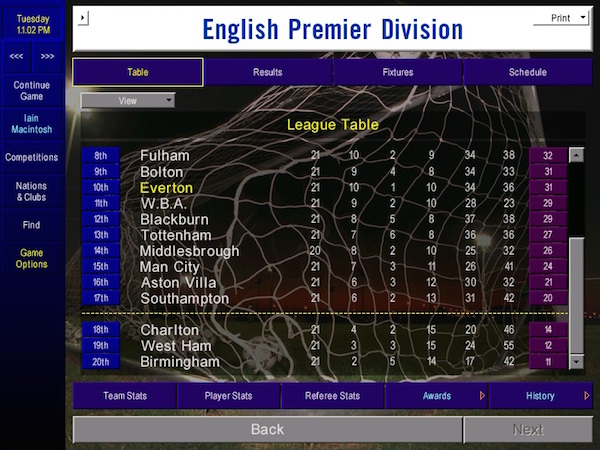 Can it get worse? We’re tenth, we’re bankrupt, we’ve got terrible players and there’s no sign of a takeover. Oh, it can get worse. Health and Safety pay us a visit and shut down half the West Stand. For all of our other problems, at least we could get more than 40,000 through the door on a Saturday. Not anymore. 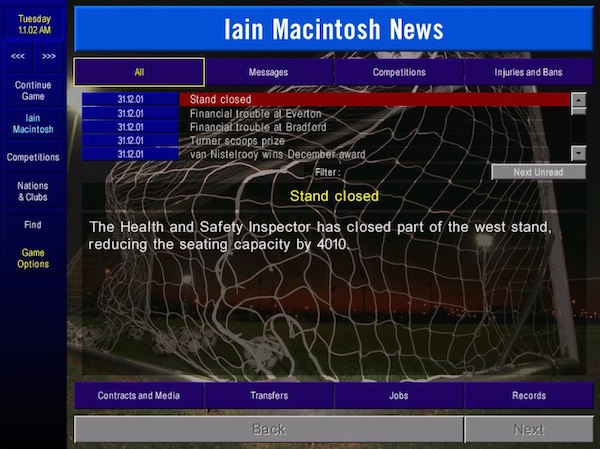 Please. Someone come and rescue us. Please.