It is the summer of 2001. In the UK, Tony Blair has just won his second term of office. In the US, George W Bush is just beginning his first. The world is at peace. And you can still smoke in pubs.

Life is very different here. Sir Alex Ferguson reigns supreme at Old Trafford, but will retire at the end of the season. Arsene Wenger has Thierry Henry and Patrick Vieira at his disposal. Liverpool have Michael Owen and Robbie Fowler. Neither Chelsea nor Manchester City are considered serious threats. Leeds United are though. Under the shrewd leadership of Peter Ridsdale, they’ve somehow assembled a star-studded squad. They could be contenders.

But what of Everton? Just 16 years ago, they were one of the greatest sides in Europe. It was only six years ago that they beat Manchester United to win the FA Cup. But they’re a mess now. The finances are banjaxed, expensive new signings are out of the question and wages need to be cut. It’s not all bad though. A 15 year old Wayne Rooney is sitting in the reserves. And Duncan Ferguson will be back in three months when someone pops his slipped disc back into place. The board have no expectations beyond a brave battle against relegation. It can be done. But it won’t happen quickly. And I certainly can’t buy my way to the top. 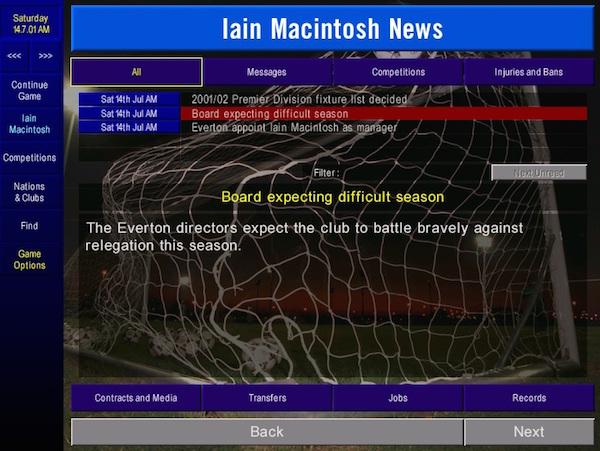 The dressing room offers little in the way of inspiration. It’s a mix of war-dogs like David Weir (Pace 8) and Alan Stubbs (Pace 3), mediocrities like Mark Pembridge (Pace 2) and Scot Gemmill (Pace 10) and young talent like Rooney (Pace 16, but Age 15) and Tony Hibbert (Work Rate 20, naturally). Added to this shortfall of ability is an injury crisis that has wiped out six senior players. How David Moyes did this in real life without just bursting into tears and driving back to Preston is anyone’s guess. 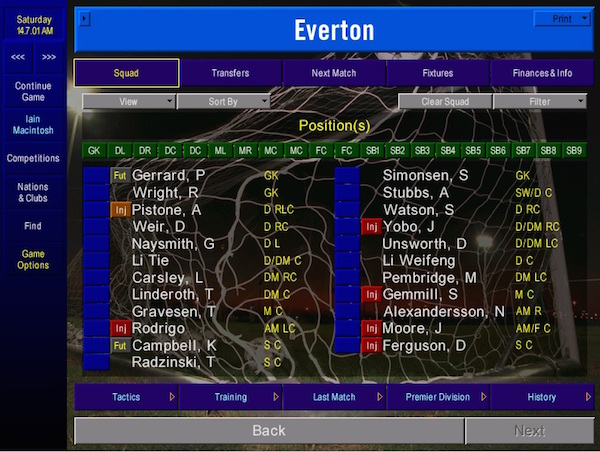 There seems little point in messing around with the back room staff. There’s barely enough money to pay the bills, let alone to be frittered away in severance packages. I keep everybody in place and set up basic training routines for the senior players, and extra technical work for the youngsters.

With just £325,000 available in the transfer kitty, the first port of call is the free transfer market. An early approach for a 31 year old Faustino Asprilla is blocked by his wage demands. As is a bid for Hakan Suker. We can’t pay more than £17,000 a week, so recognisable names are unlikely to be impressed. Tijjani Babangida once shone for Ajax and he’s got a pace of 20, but while his wage demands are realistic, he wants a £900,000 signing-on fee. We can probably stretch to £900. Even Taribo West, the rubber ring for all struggling CM01/02 managers, is out of range. David Ginola seems more open to a bid though and he has a pace of 16, which I think makes him eight times faster than Pembridge, despite his advancing years. A short term contract is duly offered. 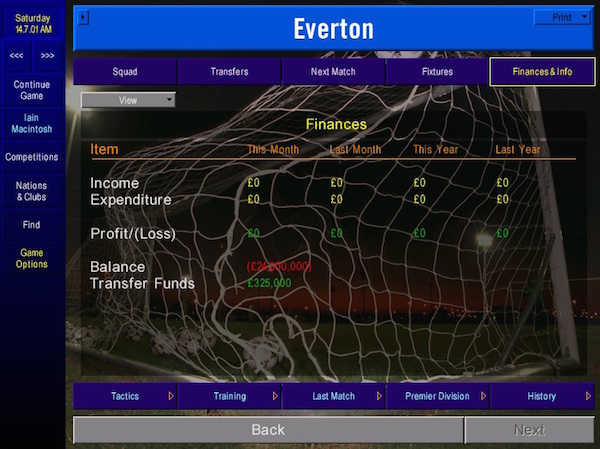 The first of four pre-season friendlies takes us to Highfield Road for a kickabout with Gary McAllister’s Coventry. A simple start is required, so it’s four four fudging two, direct ball with hard tackling and constant pressing. Moyes would be very proud of me. I’m forced to call up Kevin McLeod from the reserves as Pembridge is the only senior left-sided midfielder and he’s slower than most glaciers. I’ve left Rooney in the stiffs because he’s not even old enough to buy cigarettes. Theoretically. 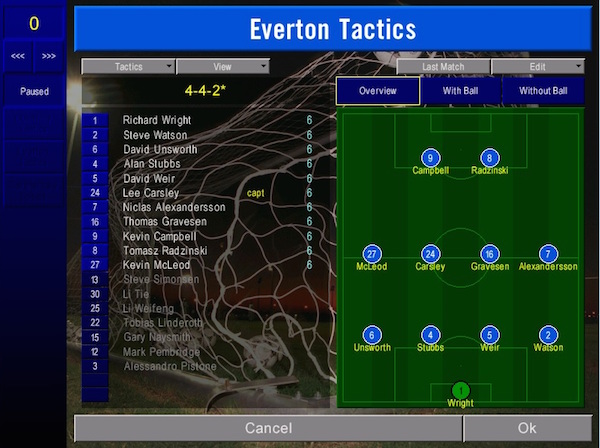 It’s a grim encounter. They’re rubbish and we’re rubbish. Chances are few and far between. The only excitement comes when Thomasz Radzinski misses a penalty. CM01/02 has no penalty-taking attributes, so it’s a case of watching and learning. I make a note to drop him down the list of preferred takers. The game ends goalless and I’m not sure I’ve learned too much. 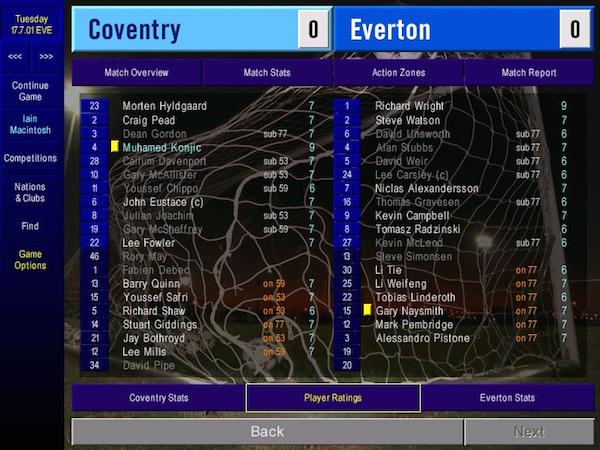 We have a trip to Cologne lined up two days later which means that I need to pick a completely different team. That’s no bad thing. It’s a chance to check out the reserves, to see the hidden depths of my squad. After all, this is what I’ll have to rely on with no money to spend. I scan the players at my disposal. And then I go for a long walk, the closing stages of which are spent telling myself to get my chin up and stop snivelling. This lot are terrible. 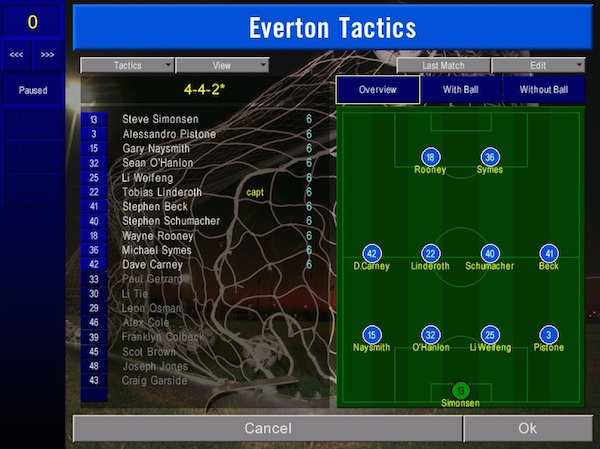 We do at least score a goal this time through the 17 year old Stephen Beck, all pace and no talent, but it only serves to anger Cologne and they win 2-1, outplaying us in every departments. Beck’s goal is our only shot on target. We’re all losers today. When the game is over, I see message flashing in my in-box.

“David Ginola is delighted to have agreed terms with Le Harve. He rejected the offer from Everton.”

This is not going to be easy…