It’s 2002! The year that a cursory search of Wikipedia reveals brought not one, but two potentially catastrophic asteroid impacts and another notable near miss. Who knew the human race was so imperilled? No-one at Goodison Park, that’s for sure. The only destructive and unstoppable force of nature that concerns us is Duncan Ferguson. We can’t get him fit. Not that it would help. We have a thin squad, no money and there’s no sign of new owners. A promising start has led to a disappointing December. We’ve won 10 games, but we’ve lost 10 too and we’re out of the League Cup. Will January bring more joy?


New Year’s Day sees us travel to Leeds United, who are not the force they were back in the summer. Terry Venables’ team are losing games all over the place and have slipped to seventh. They’ve been beaten by WBA and Fulham in recent weeks, both of whom countered Venables’ 4-4-2 with a 4-4-2 of their own. This is not a formation we’ve used so far this season, but given that we’re rubbish, it doesn’t feel like too much of a gamble to give it a go. Richard Wright, after two appalling performances, is dropped for Steve Simonsen. Kevin Campbell and Tomas Radzinski lead the line together for the first time. 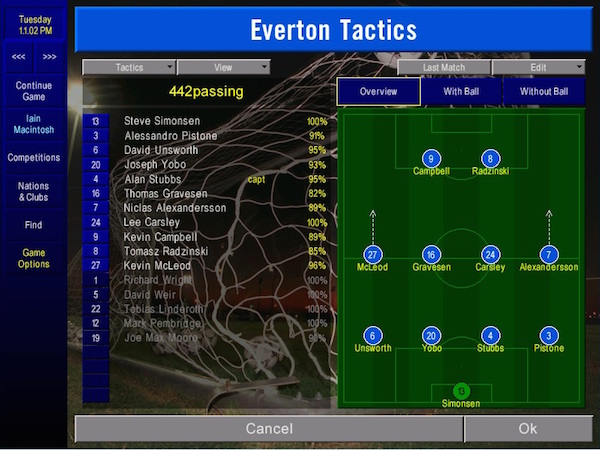 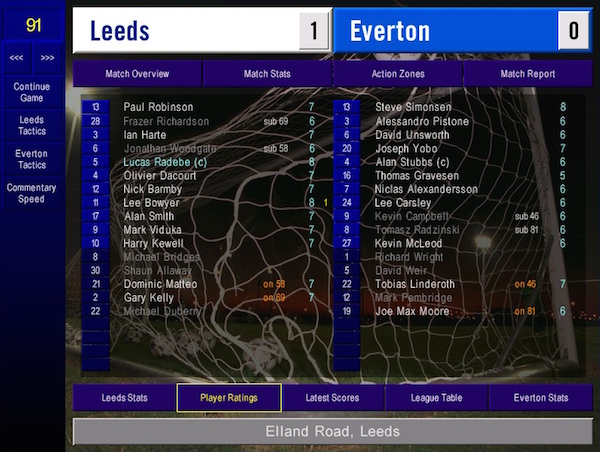 Perhaps the FA Cup, our last hope for a swift conclusion to this mission, will offer some respite. It’s not an easy draw. Powered by the goals of Leon Knight, Sheffield Wednesday are making a concerted push for promotion. They’re playing with a 3-5-2 as well, so we revert to a midfield three, but not a cautious one because we’re still Everton and we should still be winning games like this. Simonsen retains his place in goal and the exhausted Radzinski loses out to Campbell in the battle for the lone-striker role. 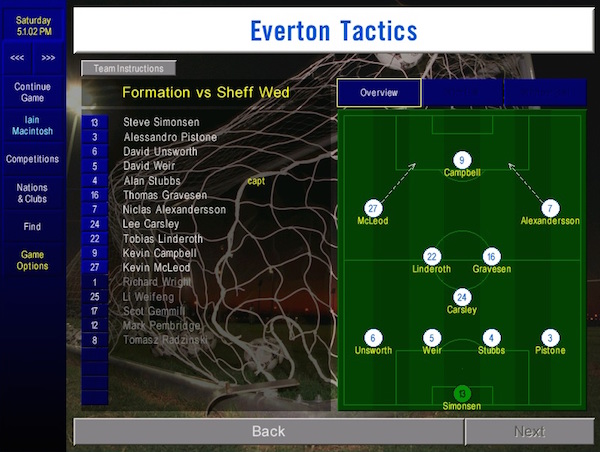 Five defeats in a row. We’re in freefall. There’s nothing else to say. This cannot continue. A few days later, Simonsen decides to skip training. I don’t understand why. He’s playing well, he’s just usurped Wright from the first team. But I can’t have this. I fine him two weeks wages. He feels it’s unfair, the poor kitten. 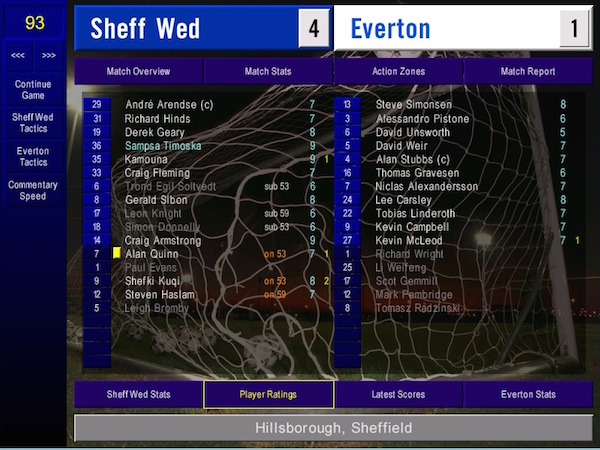 But it’s not all bad. 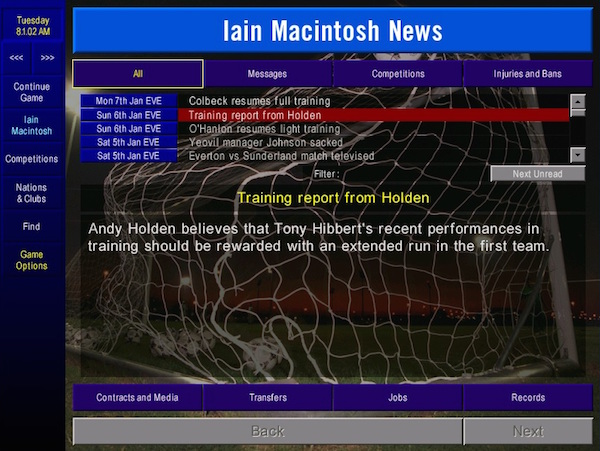 Well, he’s picked a good week to grab my attention. He can consider himself in the first team. As can a host of new faces. Five defeats in a row is intolerable. David Unsworth (av. 6.40) is out, Alessandro Pistone shifts to the left to make room for young Tony Hibbert. In the absence of the suspended Thomas Gravesen, Steven Schumacher returns to the team and with Niclas Alexandersson (av 6.50) and Kevin McLeod (ac 6.48) so irrepressibly incompetent, we take wide men out of the equation and switch to a diamond formation. Leon Osman goes in the hole. Nick Chadwick gets a debut up front and 16-year-old Wayne Rooney makes the bench. If he makes an impact, it’s not necessarily good news. Because of our financial situation, we can’t turn down any offers for any players 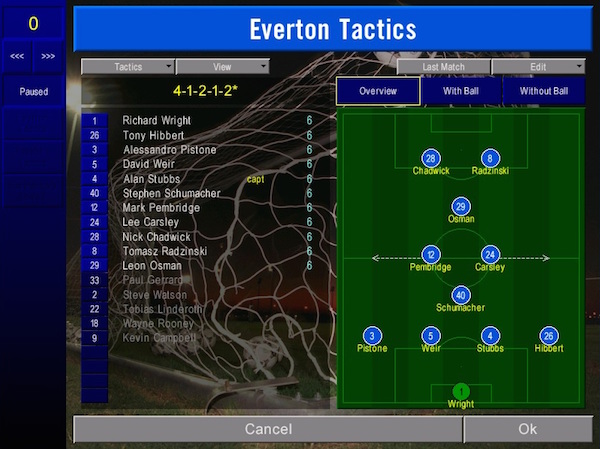 We’ve finally stopped the rot. This was a big performance, especially from the younger guys. Wright returns to form, there’s a seven for Osman, eights for Hibbert, Chadwick and Wright and a nine for Schumacher. Graeme Souness plays into our hands by fielding an ultra defensive team and when Tugay is dismissed just before the hour, we know we’re safe. A huge weight has been lifted from our shoulders. That’s 34 points now and a return to eighth in the table. Now we just need to build on this. 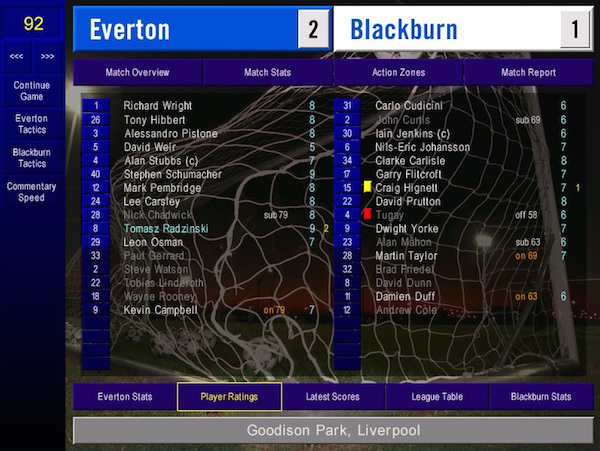 It doesn’t look good for Glenn Hoddle at Tottenham. His weird, asymmetric formation has brought him just seven league wins and Daniel Levy was expecting far more than that. 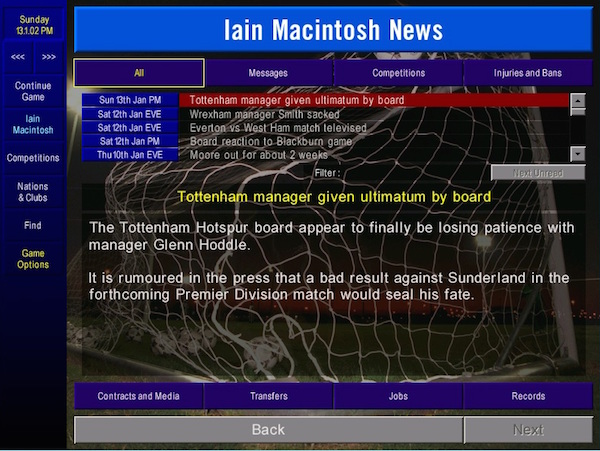 We end the month with a trip to Manchester City, the team we beat for our first victory way back in August. We may as well just stick with the same formation, given that neither Alexandersson or McLeod have made a case for their return in the reserves. Kevin Keegan’s City are down in 15th, well clear of the drop thanks to the uselessness of Birmingham, Charlton and West Ham and are still playing the same open 4-4-2 that we exploited so easily last time. Nicolas Anelka has only scored eight goals this season, some way short of a player like him would expect. Hopefully, he won’t suddenly click into form now… 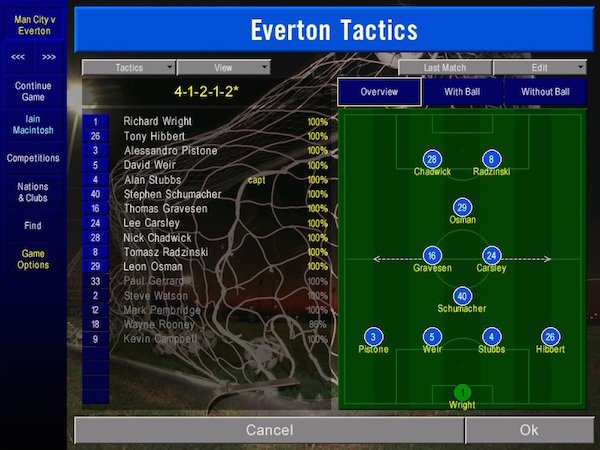 If ever there was a performance to encapsulate Keegan, it’s this one. City pile forward, firing in shots from all over the park, but to no avail. Wright keeps everything at bay, but few of the chances are clear cut. When we get forward, we’re not so profligate. Lee Carsley opens the scoring, shortly before, “landing a fine right hook on Witschge,” and getting away with a booking. When Radzinski fires home a potshot, the game is ours. 4-5-1, shut it all down. Another three points. All of a sudden, we’re looking just fine again. Changing tactics was, on reflection, a very good idea. 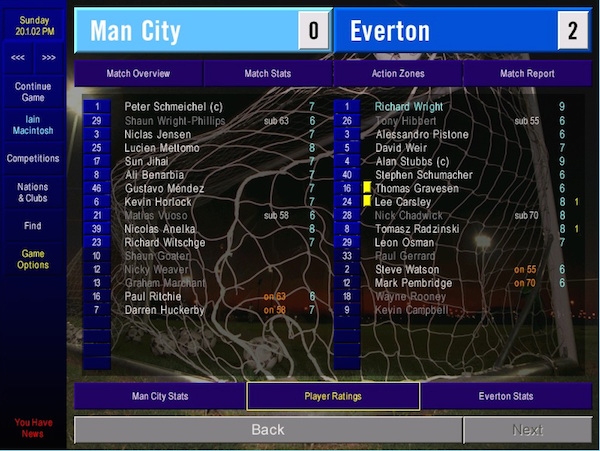 And so we head into February, a month entirely unpolluted by cup competitions or European football. We are respectably placed, we have fourteen games to play, but we still have no money. Contracts are beginning to expire and it’s hard to formulate a strategy. Is it worth retaining terrible senior players just in case we can’t attract free transfers? Should we move quickly to sign up Bosman players, knowing that there’s a risk we could attract new investment and then be shackled to a tranche of emergency players? Fuck it, at least we’re not getting relegated. 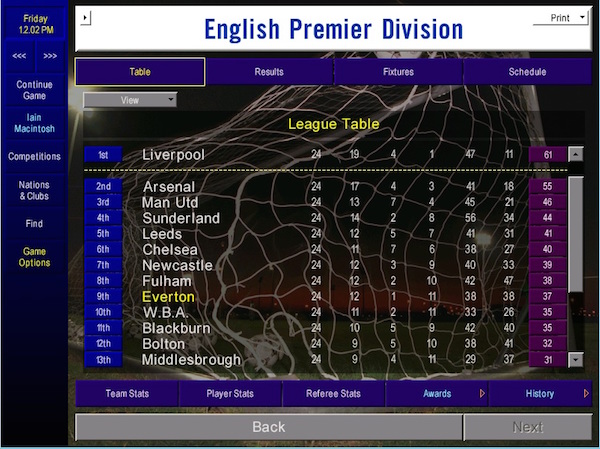 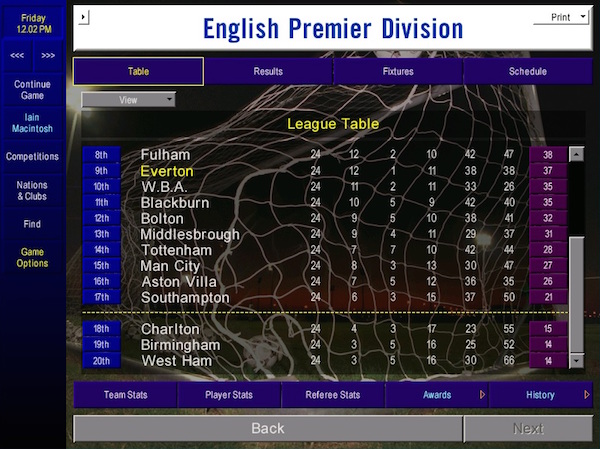 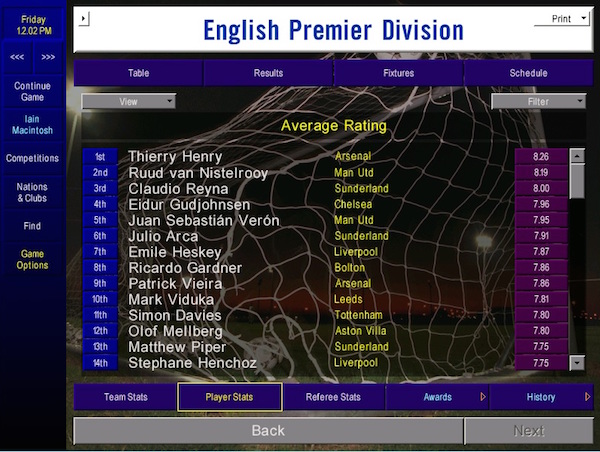 Join us again next week for February and, with a bit of luck, a new owner. Surely? And farewell, Glenda. 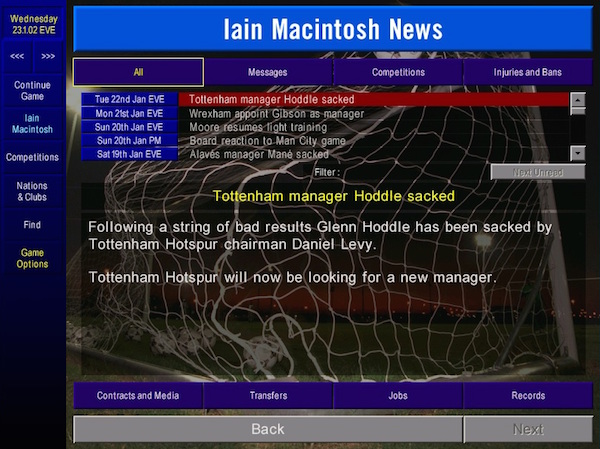