One point. One point is all it will take to give us Champions League football. This whole season, this whole ridiculous adventure thus far, will rise or fall on our ability to take one single point from our last three games. But there’s a catch, we’re up against an Aston Villa side fighting for their lives, a Manchester United side with some of the best players in the game, and an Arsenal side fighting for the title. Villa are up first and you know my feelings about changing a winning team. We may not have much, but we have continuity. They may take our transfer kitty, they may restrict our wage budget, they may savage our credit rating, they may reduce our stadium capacity, but they’ll never take our bone-headed consistency. Advance, you potato-headed blue dogs of war! 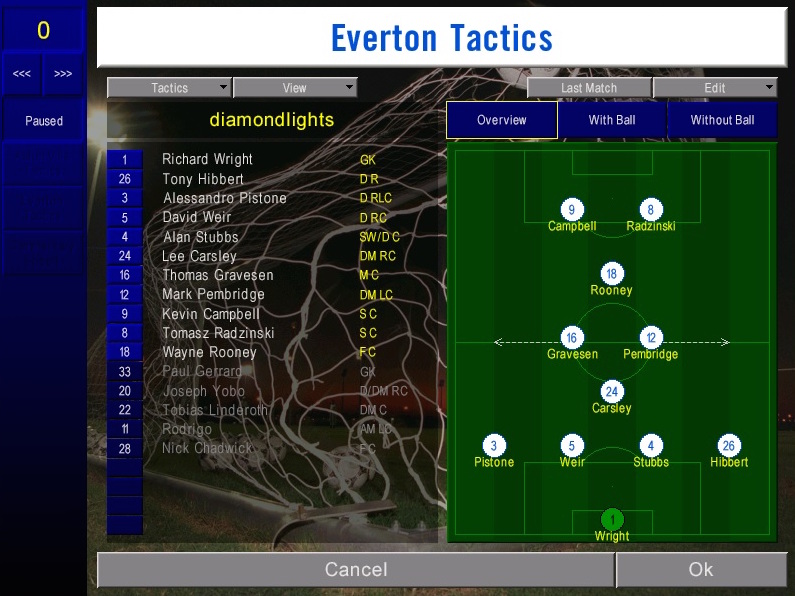 Too tense. Far too tense. Villa, who have been largely crap all season, suddenly locate their testicles and put in a fine performance, rewarded with a goal just before half time by Juan Pablo Angel. We are building moves, but failing to finish them or creating chances, but always missing them. I take several deep breaths at half time and opt to make no changes. Surely time will tell? But after 65 minutes, time is still refusing to speak. I click the tactics button, but Villa begin an attack that seems to last forever before it breaks down. I try very, very hard not to scream. Then off come Tomasz Radzinski and Wayne Rooney, neither of whom have performed. On come Rodrigo and Nick Chadwick. But still Villa hold out. My knuckle go white as I grip the side of my chair in tension. The minutes pass by without a second glance. And then from nowhere, with seven minutes to go, Alessandro Pistone crashes in a long range effort and we’re safe. We’re okay. We’re going to do it. We’re going to play in the Champions League. Or the Champions League play-off, at least. 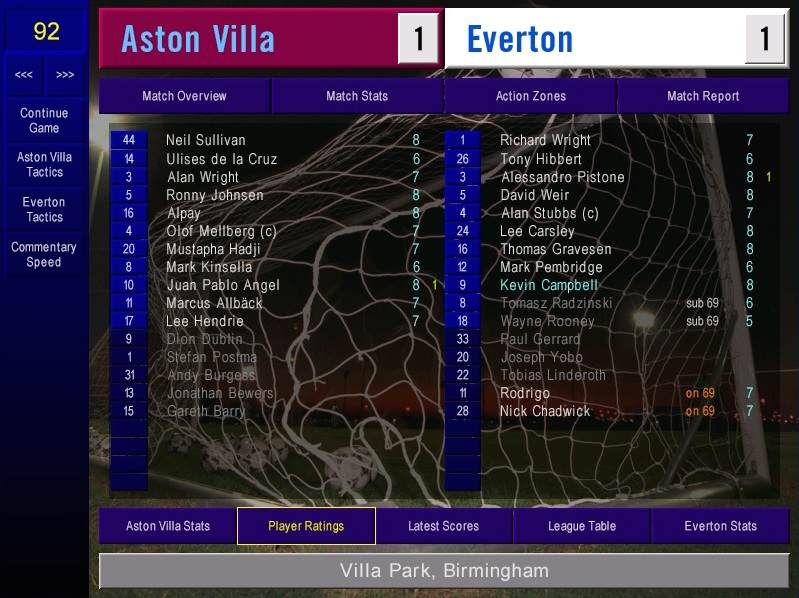 It’s enough. Leeds United can’t catch us. Suck on that, Venables. Sunderland are out of contention too. Eat my dust, Wilkinson. I’ll have to shout for Newcastle and Chelsea to hear me back in seventh and eighth. Oh, what a time to be alive. Now we play our final two games, against the best teams in the league without any pressure whatsoever. And to think that I looked at the fixture list and trembled at this run-in.

It’s been an odd season for Manchester United. A narrow victory over Roberto Mancini’s Lazio has taken them to the Champions League final in Hampden Park, but that seems to have distracted Sir Alex Ferguson from the league where 11 draws and four defeats have left them trailing Liverpool and Arsenal. Needless to say, I’m changing absolutely nothing here, save for an instruction for everyone to zonal mark because United are so fluid. 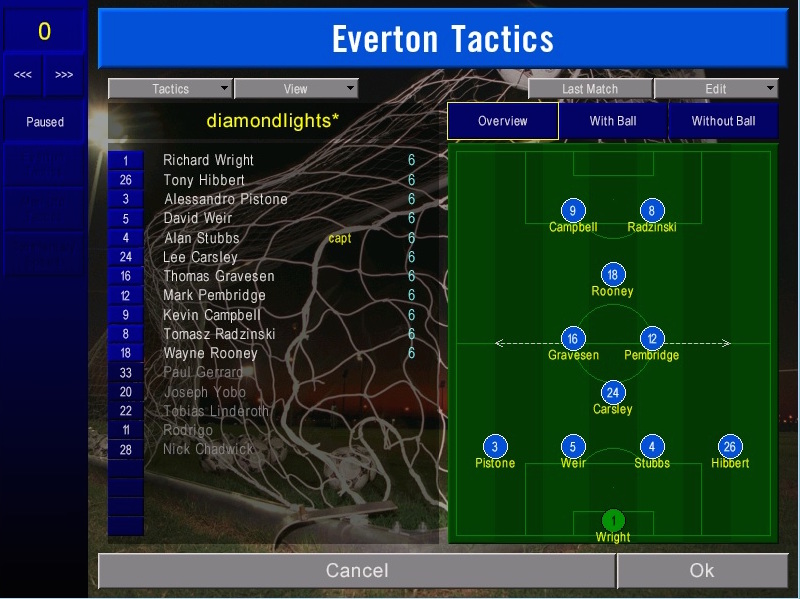 All season long, I’ve shut games down and stolen points. All season long. It’s been the secret of my success, except it’s not much of a secret because I keep going on about it. But now, it’s bitten me on the arse. Goals from Wayne Rooney and Mark Pembridge gave us an early lead against a flat United side and the game was dead by the hour mark. We weren’t doing much, they weren’t doing much, the clock was ticking over nicely. Whether it meant anything or not, we were heading for an exceptional result. Eager to protect tired players and to give some time to the subs, I made three changes in the last ten minutes and left them to it. In the space of two minutes, Paul Scholes hit a brace and then Ruud van Nistelrooy hit the post. We got away with a point. There are lessons to be learned here. 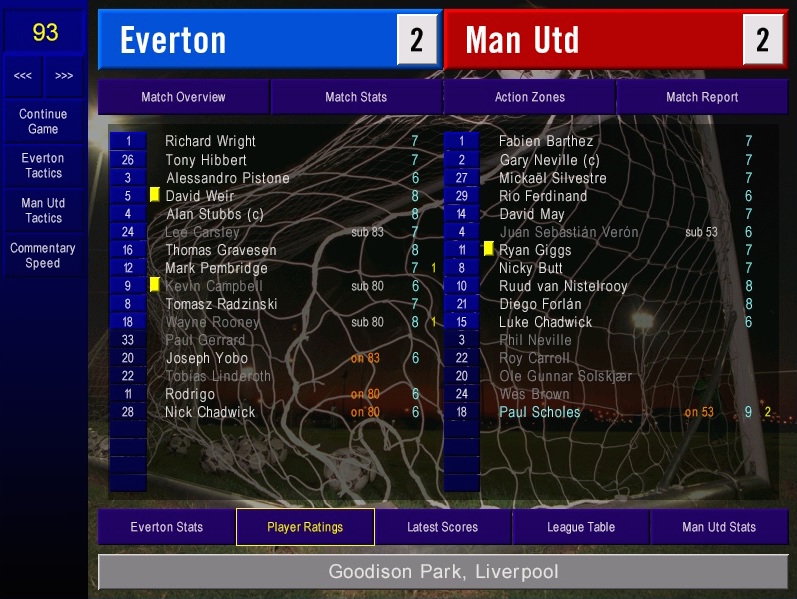 There are lessons to be learned in Portugal too, where one up-and-coming manager pays a heavy price for his failures in the UEFA Cup, the league and the domestic cup. I can’t help thinking that they’ve jettisoned this guy a little prematurely. 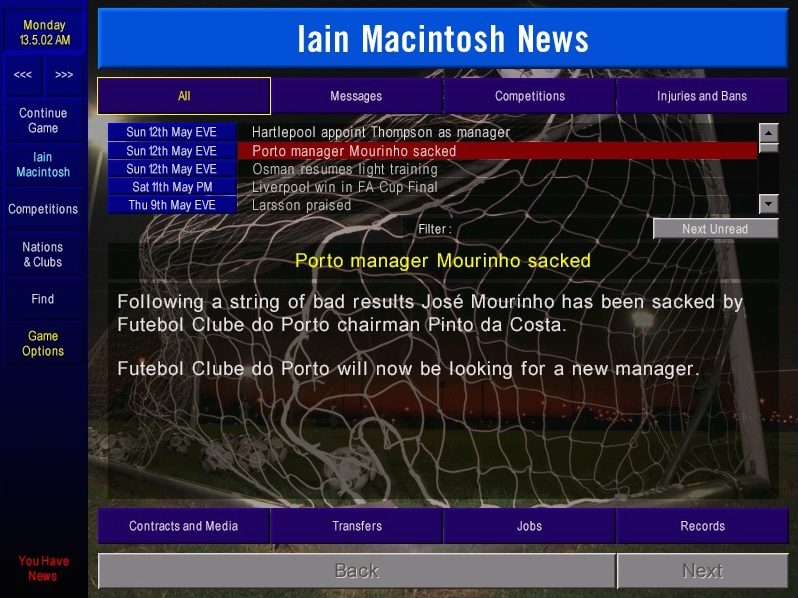 Elsewhere, Leeds United make up for their disappointing Premier League performance by nabbing the UEFA Cup from AC Milan. The newly crowned Italian champions lose Rivaldo to a first half red card, but hang on to send the game to a penalty shoot-out. But misses by Morten Gamst Pedersen and Jon Dahl Tomasson cost them dearly and Danny Mills holds his nerve when it matters. 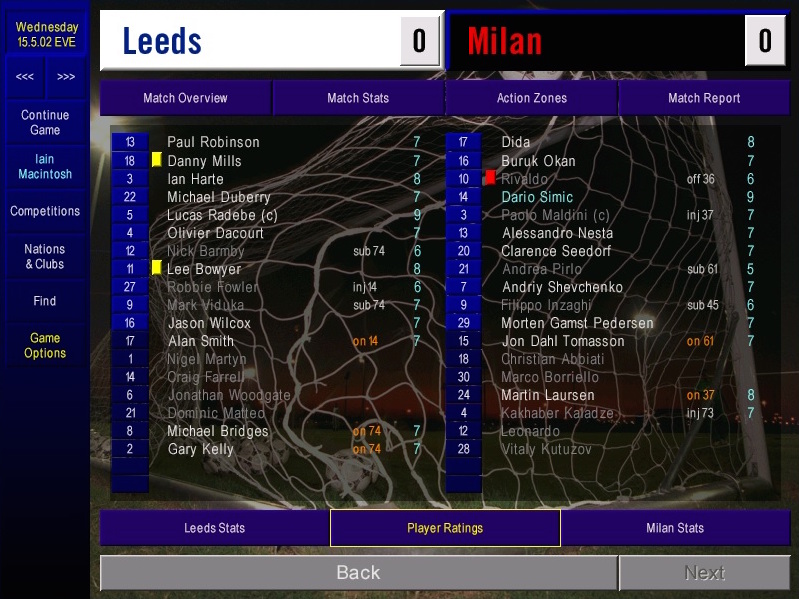 Title chasing Liverpool, who need to win their last game and hope that Arsenal don’t beat me, have the small matter of an FA Cup final to play first and they make light work of it. Danny Murphy hits a hat-trick as Sir Bobby Robson’s men are put to the sword at Wembley.

And so to the last day of the season. Arsenal visit Goodison Park with a title on their mind. Liverpool have to win at Tottenham to have a chance of stopping them and Glenn Hoddle’s Aston Villa need to beat West Bromwich Albion or risk losing their Premier League status to Danny Wilson’s West Ham. And it’s live. 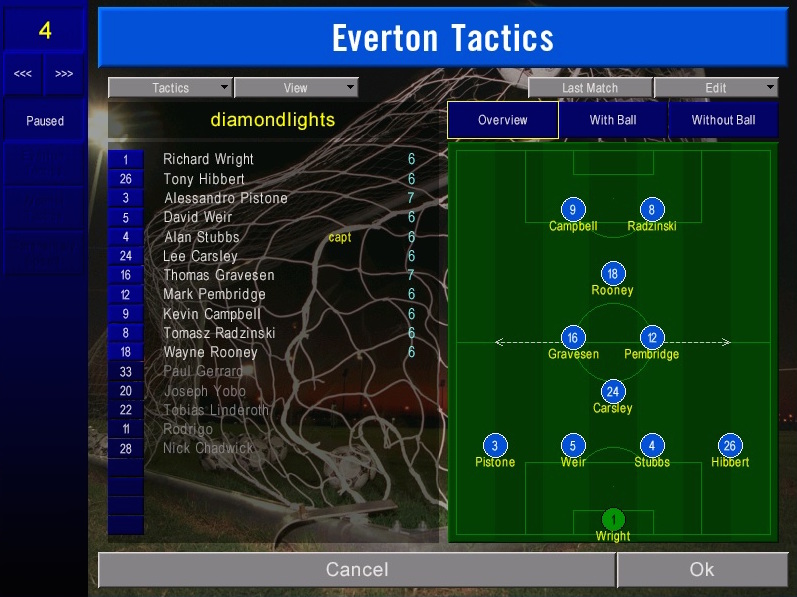 Sorry, Liverpool. This was honestly not a deliberate act of war, though in retrospect it might have been worth making a few changes to a tired team. These boys had their flip flops on from the start. Freddy Ljungberg opened the scoring after 12 minutes, Thierry Henry added two more before the half hour. A triple substitution in the second half made absolutely no difference and Arsenal cantered home to the title. 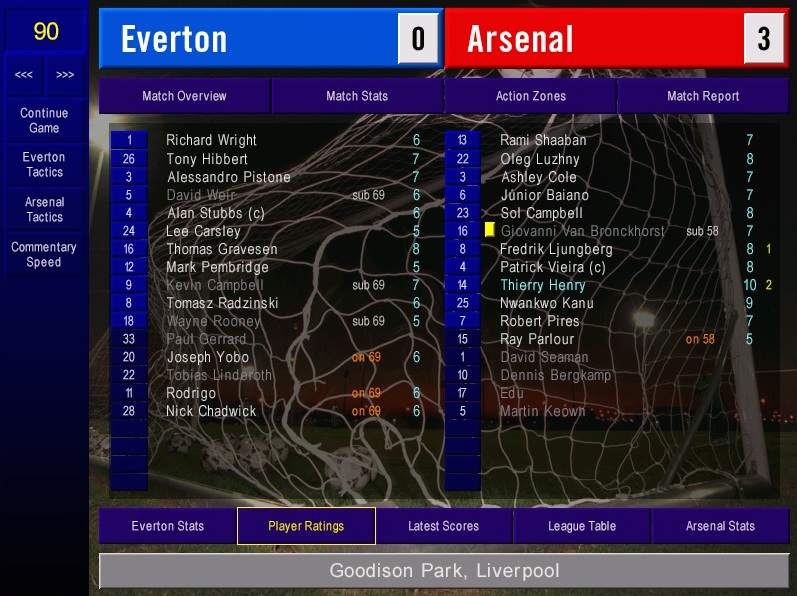 My Everton, while enjoying their highest league finish since 1987/88, finish the campaign without a win in three games. And, to be quite honest with you, dear reader, I have zero fucks to give about that. 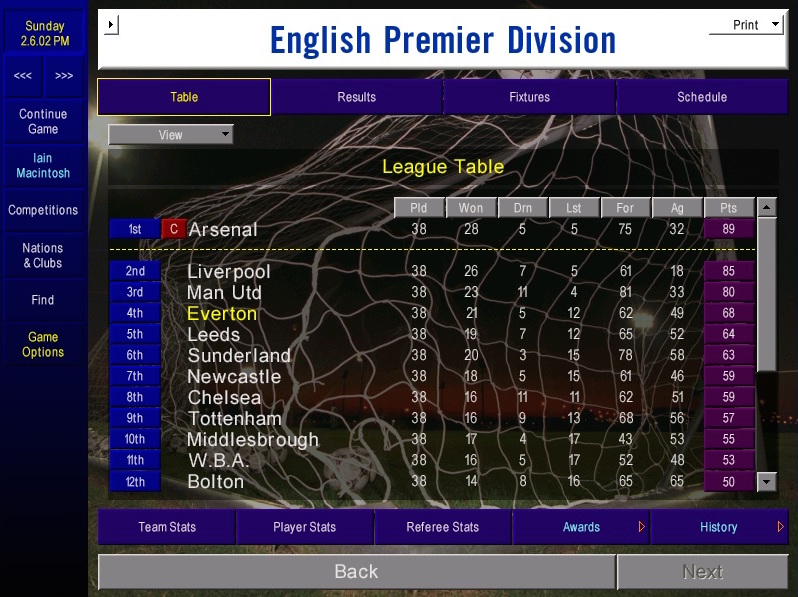 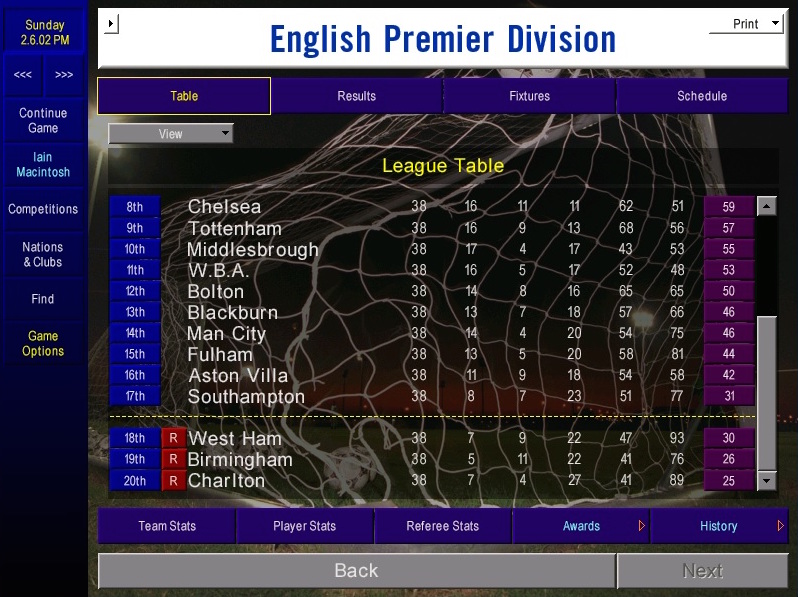 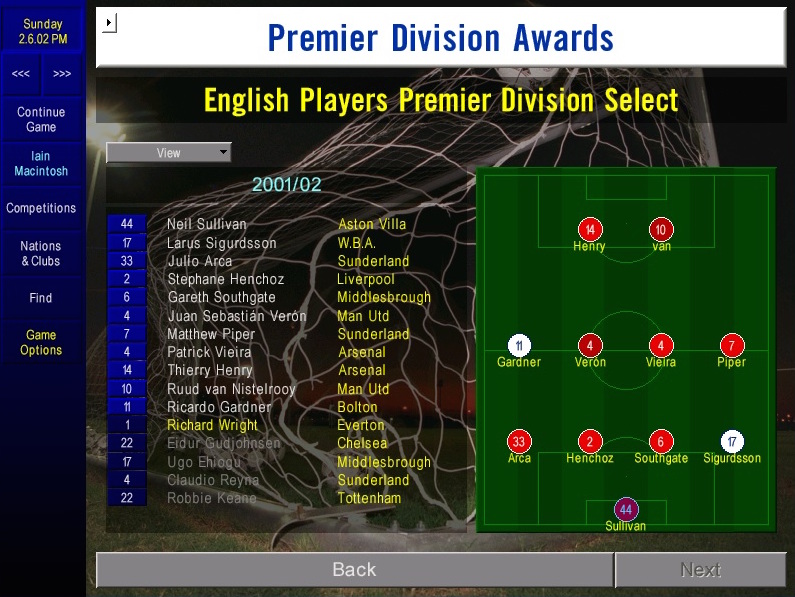 The rebuilding for next season starts here. No matter what happened this year, this squad isn’t good enough to even be sure of a top half finish next season, let alone to promise a dignified effort in the Champions League. We need players and we need them now. Sadly, in spite of our heroics, no-one has come to buy the club, clear the debts and give us some kind of foundation upon which I can build a bold, blue future and actually win something. Even with £4.3m in prize money, the bank account still makes for ugly reading. That green block of £475,000 is interesting though. It may not be enough to do much, but I’m sure I can do something with it. 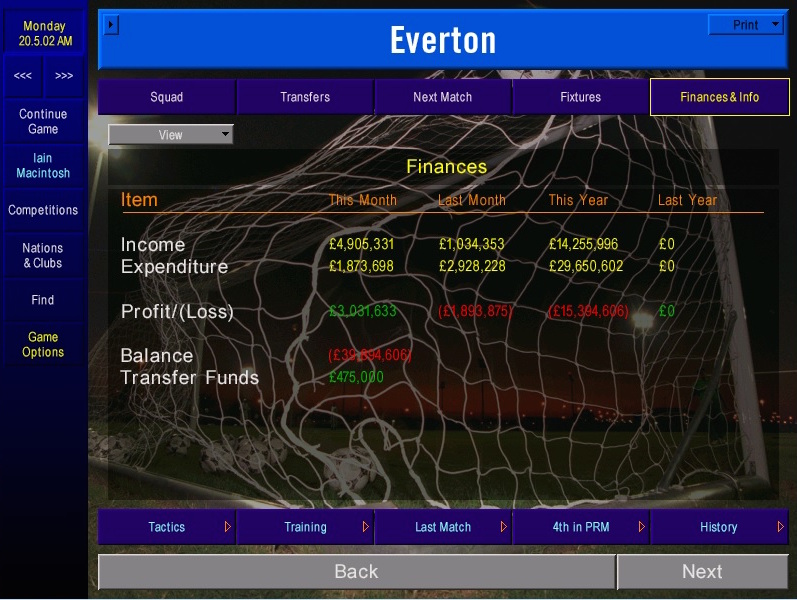 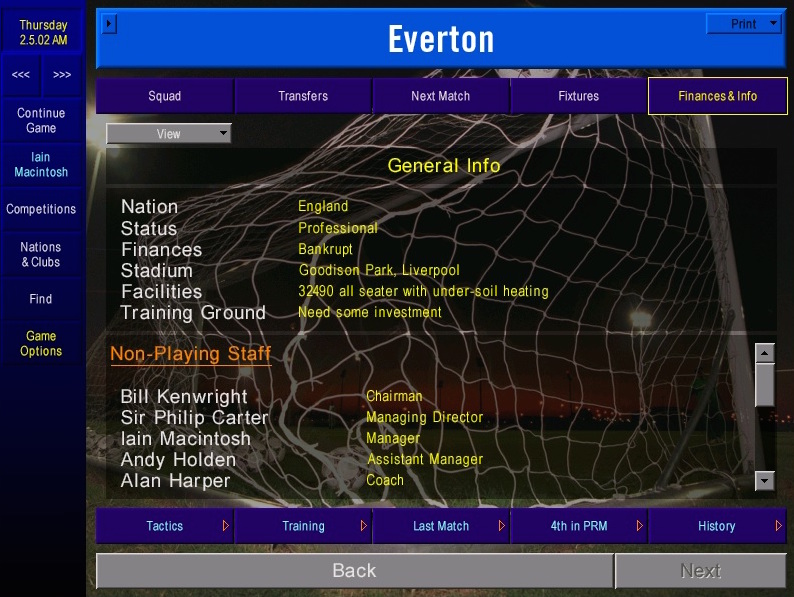 But before I get scouting for bargains, I rifle through the list of players approaching the end of their contracts. There’s not much in there, most players have been secured by now. I’ll have to move quicker next time. I do find this chap though. He may be old, he may not be what he was, but by thunder, I reckon he’ll be better than Scot Gemmill. Welcome aboard, Rob. 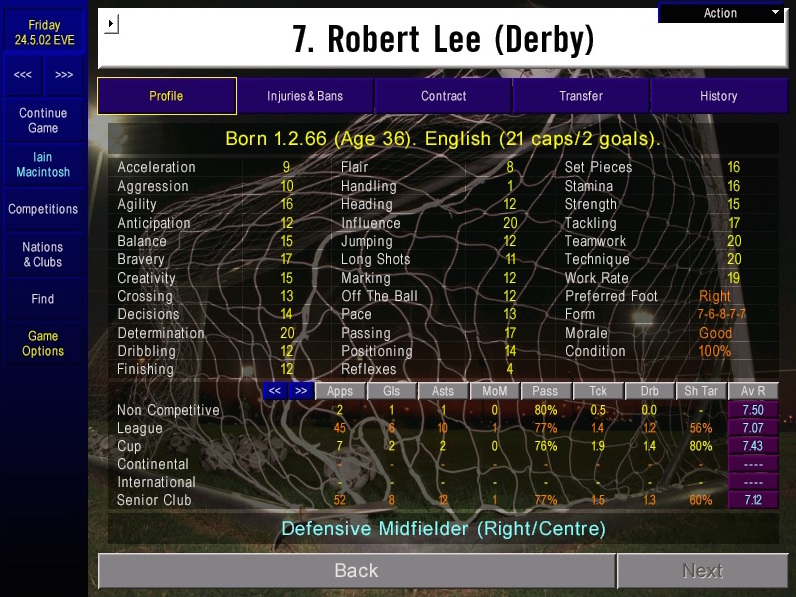 The season ends with the Champions League final and a strong suspicion that this data update was completed just before Ferguson decided not to cancel his retirement party. This then is his last hurrah. Only PSV Eindhoven stand in his way now. He has Ruud van Nistelrooy, Juan Sebastian Veron, David Beckham, Paul Scholes and Ryan Giggs. They have Mateja Kezman. What can possibly go wrong? 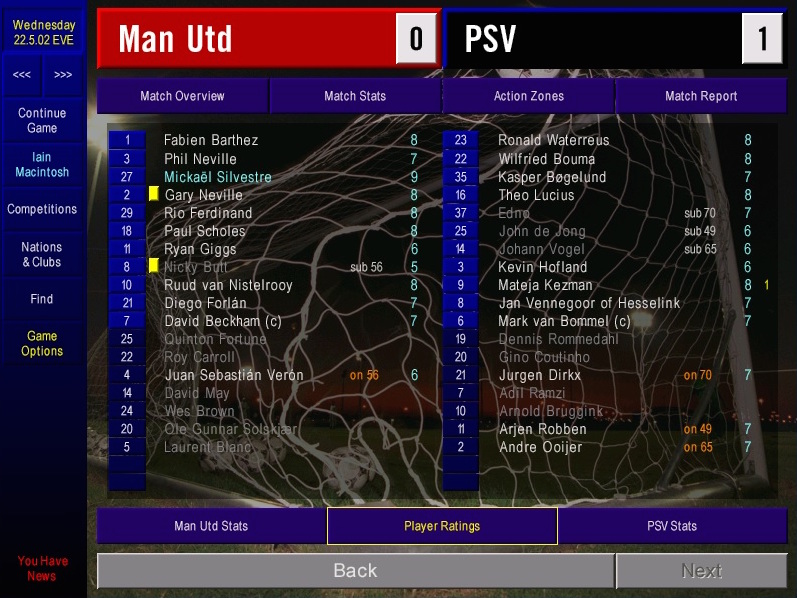 Next week, it’s the World Cup in Japan and South Korea, a search for new players and a screenshot dump of statistics because I know you secretly like it, you filthy little number scamp, you.