Last year, we were dragged all over Germany in pre-season with three games in four days destroying both fitness and morale. And I still haven’t found out who thought that was a good idea.

This year, we’ll do it better. And we’ll at least make some money. Behold, The Set Pieces Cup. Ajax, PSG, Celtic and Everton do battle on one glorious weekend at Goodison Park. A nice bit of practice for the Champions League. And speaking of which, we’ll wait for the play-off round to be arranged before we schedule anything else. 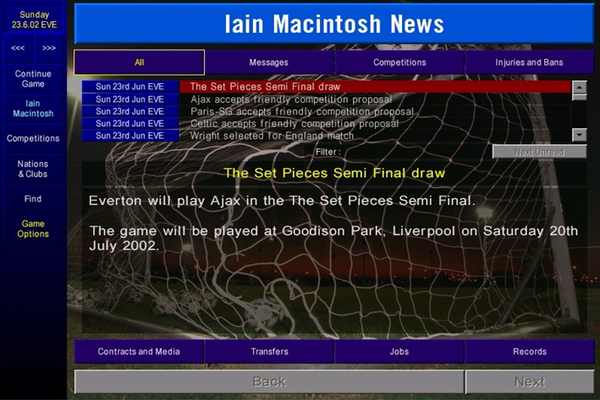 Meanwhile, it’s a bad day for England as they’re thumped by Argentina in Seoul. They will need to beat Nigeria now in the third game or risk an early exit. And there’s no way that Sven survives a group stage elimination. 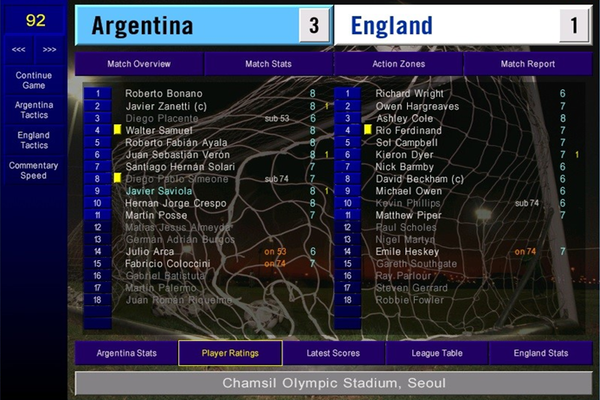 It’s not a great day for me either. Mike Duff, my all time favourite CM01/02 player, the man you can usually buy for £20,000 at the start of the game from Cheltenham, has signed for Chelsea. Everton have just £500,000 in what passes for a transfer kitty. Claudio Ranieri snapped him up for a trifling, yet unreachable, £575,000. Still, at least I’ve got Tony Hibbert. You know who else is on the move? Christian Panucci. Barcelona have paid Roma £20m for his services, and I can only look on with envy. 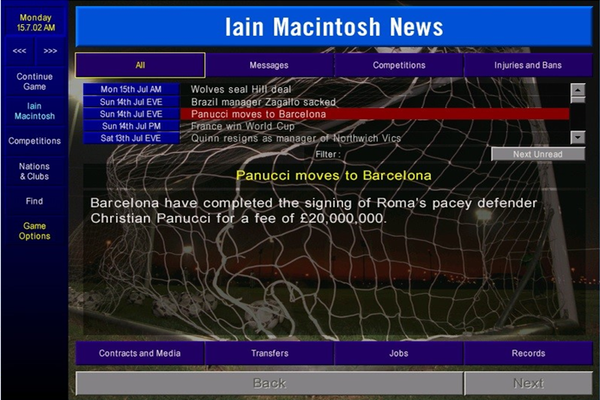 Also, guess who else is back? Marc Overmars is back. Arsene Wenger has a wallet full of money and he’s not afraid to spend it. Or at least, some of it. 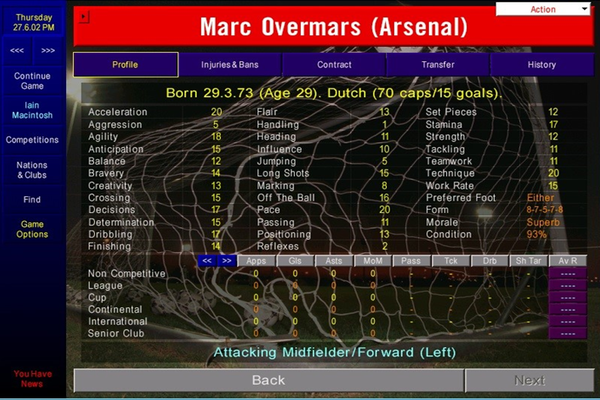 But there’s disastrous news from Incheon, where England crash to defeat against Nigeria. Golden generation, my arse. Sven is toast now, surely. And that should shake up the managerial job market. Not that it will affect me. I’ve latched myself to Goodison Park until I’ve won something. I may well be here longer than Moyes at this rate. 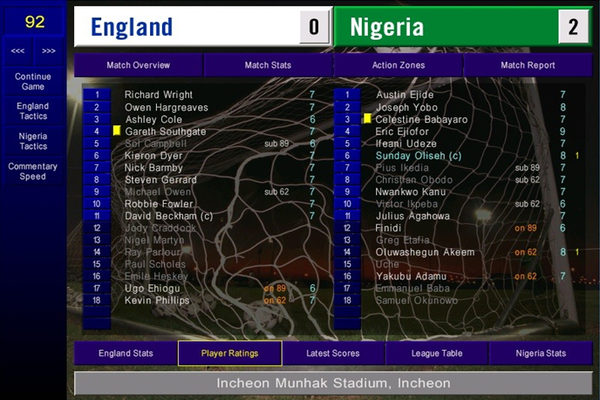 England aren’t the only nation in trouble. Germany are knocked out in the second round by Marcelo Bielsa’s Argentina, while Brazil are obliterated by Portugal. Bielsa’s run is ended in the semi-final, courtesy of a William Gallas winner for France and Gianluca Zambrotta’s goal is enough to end Portugal’s dreams of glory. Four years ahead of schedule, it’s a France vs Italy final. 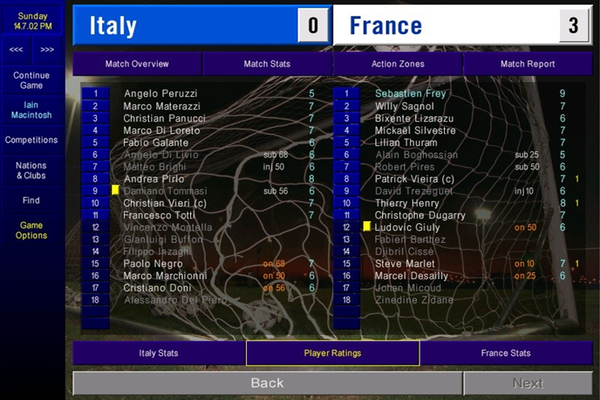 Hurrah for France! Winners of the World Cup in emphatic style for the second tournament in a row, the first nation to retain the trophy since Brazil in 1962. It’s quite an achievement by Jacques Santini, not least because Italy battered them and France pretty much scored with every shot on target. There are some curious selections in the tournament best XI, including Everton reserve Li Weifeng, but more than anything it’s good to know that Habib Beye is alive and well. 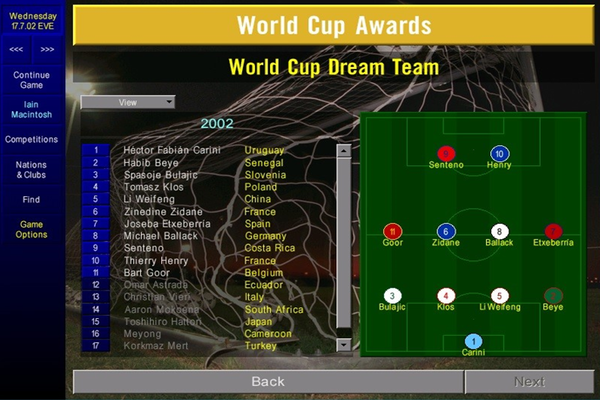 Unsurprisingly, Sven is dumped. For shits and giggles, and because I could do it on a part time basis, I apply for the job, but I don’t hold out much hope. The competition is bound to be fierce. Whoever gets this job is bound to be the very best of the best. 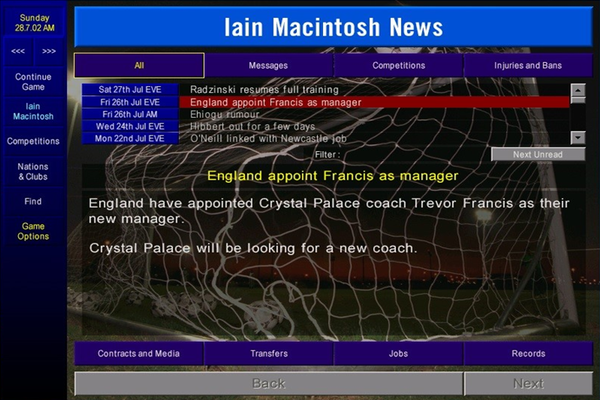 But for now, it’s on with pre-season and The Set Pieces Cup. Celtic were knocked out on penalties by Paris St Germain that still boasts the talents of a 22-year-old Ronaldinho. I’ve got Ajax, who leave 19-year-old Zlatan Ibrahimovic on the bench. And why wouldn’t they? They’ve got Mido. As for me, it’s much the same as last year, with Rob Lee in for the dearly departed Mark Pembridge and Carlos Alejandro Dure elbowing Kevin Campbell and Nick Chadwick out for a striking role. 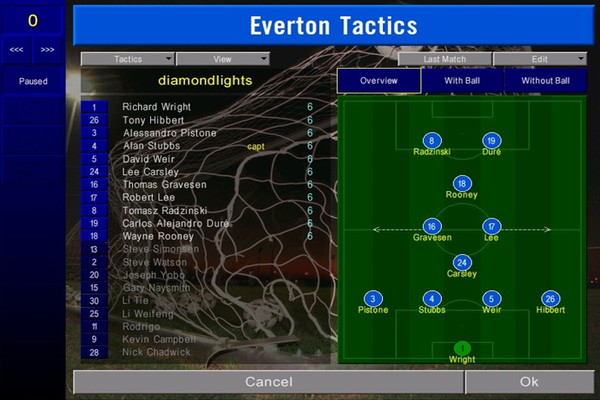 We’ve made a surprisingly impressive start. Alan Stubbs crashes home a free-kick after six minutes and Tomasz Radzinksi adds another two minutes later. We’re slightly disconcerted by the sight of Andy van der Meyde, who strikes back midway through the first half, but Wayne Rooney’s penalty on the stroke of half time wraps the game up. I don’t like the sight of Radzinski limping off, but he’s only out for a week, so we’ll live. Bring on the Parisians. 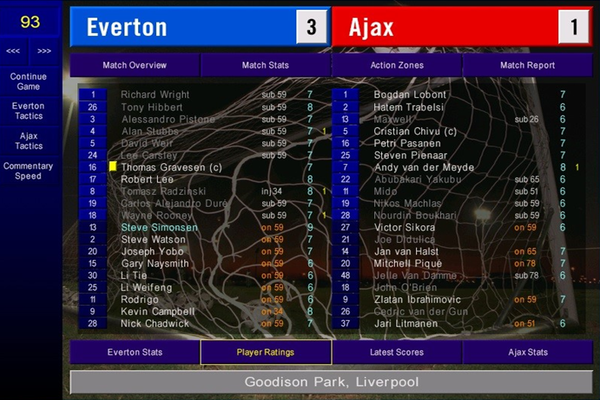 This is a tighter game, but there’s no point having easy ones in July. Dure opens the scoring, only for Romauld Coulibaly to swiftly equalise. We can’t make a breakthrough, even after a raft of substitutions and so it’s a penalty shoot-out. And naturally, we lose. Stubbs, Gravesen and Carsley all miss, the useless bastards, and it’s PSG who walk off with The Set Pieces Cup, thus removing the technical loophole that a more nefarious blogger might have used to end this challenge early. 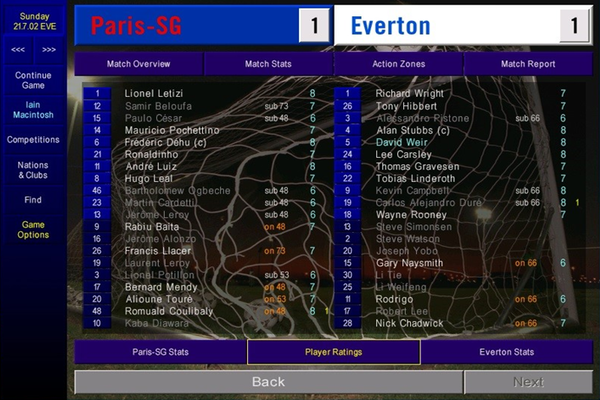 Elsewhere, the bonfire of the non-entities continues as we sell Niclas Alexandersson to Cardiff for a fee of £1.1m that we’ll never be allowed to spend because we’re still £24m under even with the season ticket sales. And, in sadder news, Sir Bobby Robson retires from football, at least leaving Newcastle United on his own terms, rather than getting booted out after only four games of the season. He’s replaced by Martin O’Neill, who leaves Celtic after winning the treble in Scotland.

As for me, I’ll still be at Goodison Park, working hard and entirely without distraction because they gave the England job to Trevor bloody Francis.. There’s still £500,000 in the kitty and I’ve got scouts everywhere looking for good youngsters without clubs, but the most important thing now is reaching the Champions League groups stages. To do that, we have to get past Zurich