It’s time to shake off the hangover, tidy up the mess and go again. Everton’s fourth place finish, in spite of their financial status, in spite of their stadium being closed down in 4,000 seat chunks, in spite of the widespread uselessness of their squad, is a fine achievement even if I do say so myself. But now we have to do it all over again, while trying to make a name for ourselves in Europe. And it would be nice if everyone was onboard.

Assistant manager Andy Holden seems to think that he’s integral to the cause. He wants a pay rise from an admittedly low £500 per week to an eye-watering £12,000 per week. I smile politely and hand him a cardboard box for his belongings. We’ve got Rob Lee on his way as a player-coach, so Holden has very helpfully freed up a space. Holden isn’t the only one we’ll be shedding this summer. There are a host of players coming up to the end of their contracts and I just don’t have the money or the inclination to keep them.

It will be hard to say goodbye to Mark Pembridge and his pace of two, but it’s for the best. It will be easier to wave off Scot Gemmill, Joe-Max Moore, Leon Osman, Stephen Beck and Scot Brown. Not one of them has done anything to make me think that they should even be playing in the second flight, let alone the Champions League. 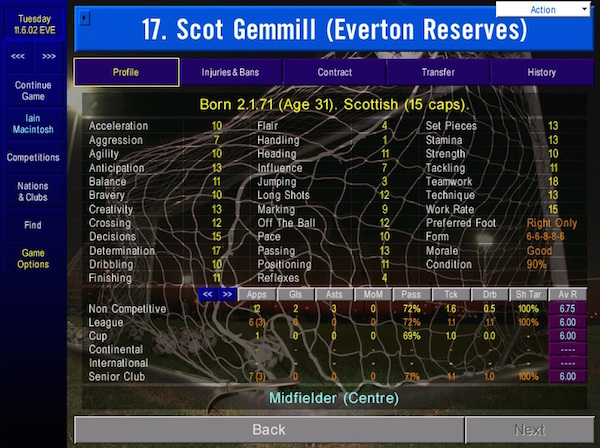 We’re well set for goalkeepers. Richard Wright was tremendous and we’re lucky to have him. Steve Simonsen seems to have calmed down after his self-destructive tantrum and Paul Gerrard is, well, he’s got his own gloves. 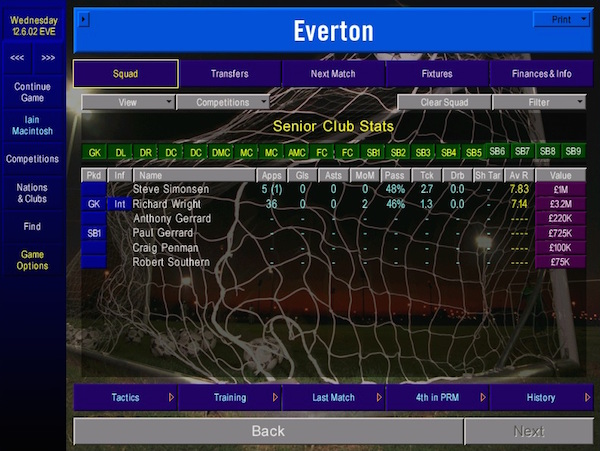 We don’t have to worry about defenders either. Alan Stubbs and David Weir continue to excel, to the extent that it’s hard to get Joseph Yobo in the side. We’ve also got the Chinese lads, Li Weifeng and Li Tie, both of whom now speak English and have been increasingly impressive in the reserves. They’ll be at the World Cup with China and I plan to use them far more now. Tony Hibbert has snatched the right-back spot from Steve Watson and Alessandro Pistone has been fine on the left. We have cover there in Gary Naysmith. 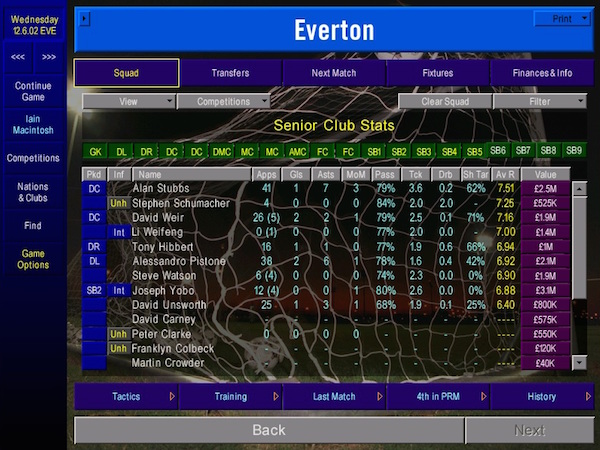 We’re a bit light in midfield, even with Lee on his way, so this is something that needs to be addressed. Gravesen and Carsley are heroes, but Tobias Linderoth didn’t do himself any justice last season. I could really use someone else, but there’s not much out there. Not for free, anyway. I may have to simply hope that Stephen Schumacher’s introduction to the first team acts as a catalyst to his development. We need numbers. 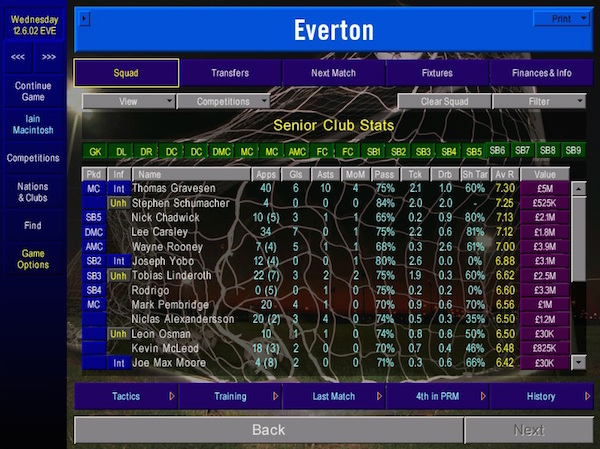 Tomasz Radzinski was excellent last season, but we struggled to pair him up with someone truly convincing. Kevin Campbell was useful at times and Nick Chadwick showed flashes of potential, but I’ve opted to bring in another free transfer to join them, 31-year-old Carlos Alejandro Dure. He’s quick, he can finish and it’s worth saying twice; he’s free. 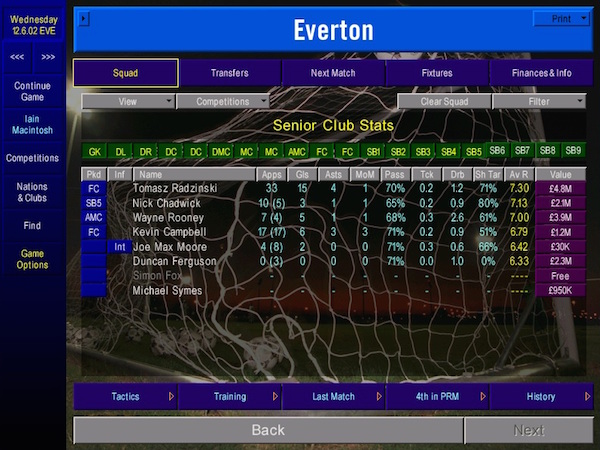 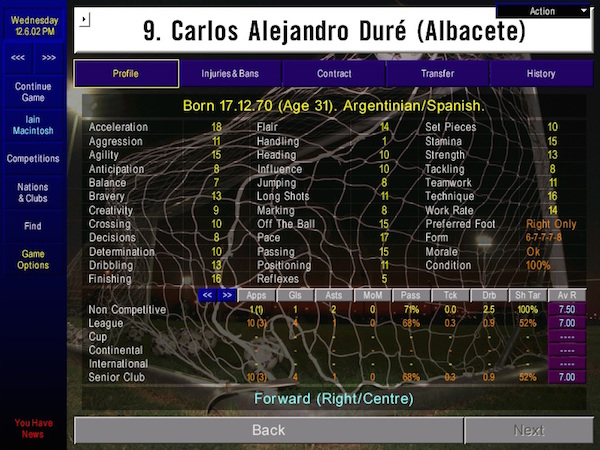 You’ll have noticed Duncan Ferguson near the bottom of that list. Shortly after the end of the season, he turns up late for training and it’s all very sad. It feels like we’ve come to the end. I fine him two weeks’ wages, mainly because he’s on £27,000 per week and transfer list him. I feel strangely uneasy about this. I know that he’s not real, that he’s only a collection of numbers in an obsolete football simulator and yet… what if he finds out? 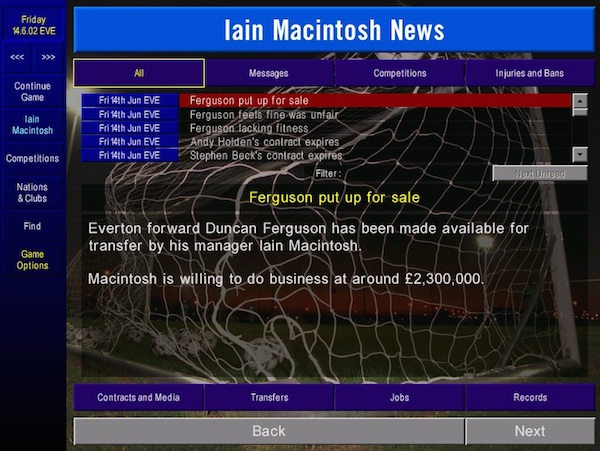 If Ferguson’s off, then so too are Niclas Alexandersson and Kevin McLeod. Neither of them played particularly well in the first place, but given that I don’t use wingers now, it seems pointless having them around. David Unsworth can go too, he’s terrible. We won’t get to spend any of the money, but at least we can drag that £400,000 weekly wage bill down a bit.

The World Cup begins in Japan and South Korea and there’s a nice surprise for France. They beat Senegal with a Zinedine Zidane goal. I can’t help thinking that Senegal’s left-back has made the wrong career choice though… 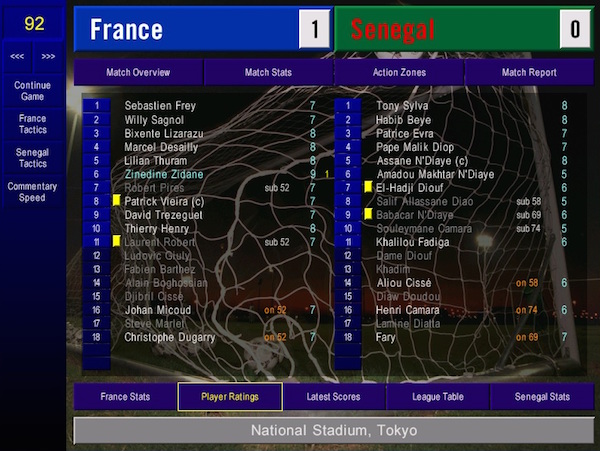 Sunderland’s Matthew Piper scores his first goal for England against Sweden to give Sven-Goran Eriksson a winning start. It’s nice to see Wright playing so well too. He deserves it. He’s a lovely lad. Shame about all those red cards, but maybe it was just a phase he was going through. 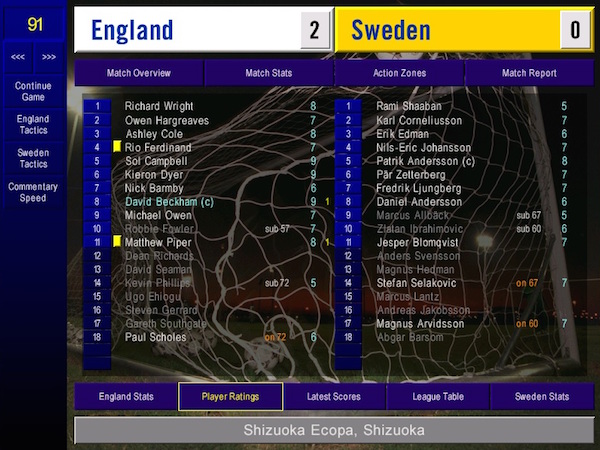 Watching China’s games, it seems that Li Tie is just as effective a defensive midfielder as he is a defender. I’ll give him a run-out in Carlsey’s position in the friendlies and that will solve two problems at once. Yes, I am watching the World Cup games. I am thorough, if nothing else. But in the midst of my scouting, big deals are being done by clubs who actually have money. Valencia make a swoop for Claude Makelele, Deportivo grab Steve McManaman and Real Madrid spend all the money on Arsenal’s Robert Pires. Retaining the title might be a little tricky now, Arsene. Unless he in turn spends the money on Lee Carsley, but let’s hope that doesn’t happen. 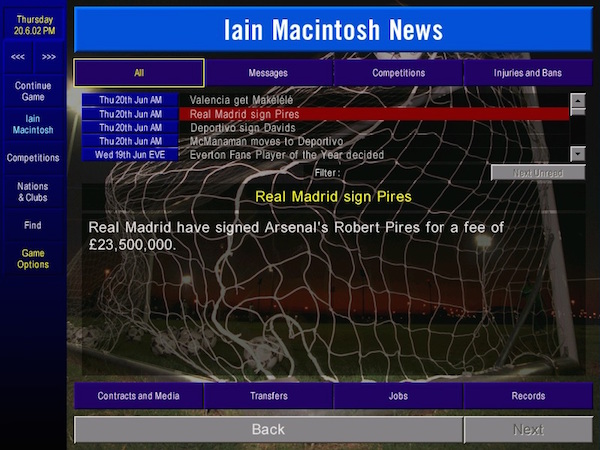 Meanwhile, the Everton supporters have their say on the player of the season and, as always, their judgement is impeccable. 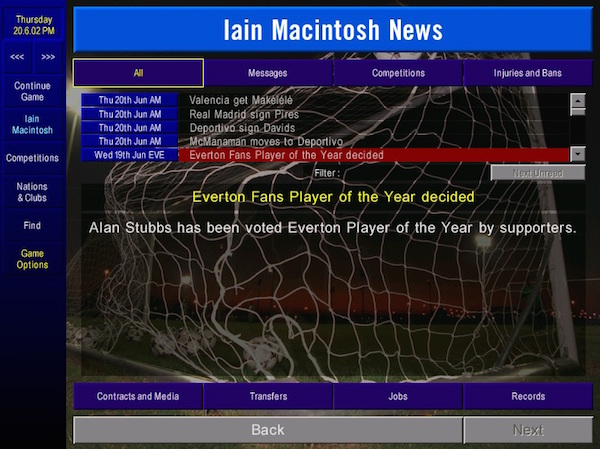 Scouting trips, baubles and quiet reflection. It’s all lovely. Until reality bites. The Premier League award Everton £12m in TV money to go with the £4m or so we picked up in prize money. Eagerly, I check the finances. We’re still £27m under and we’re still marked as being ‘bankrupt’. And our prospects for the 2002/03 season? Never mind matching 2001/02, the board think we’re going to go down. This isn’t getting any easier. 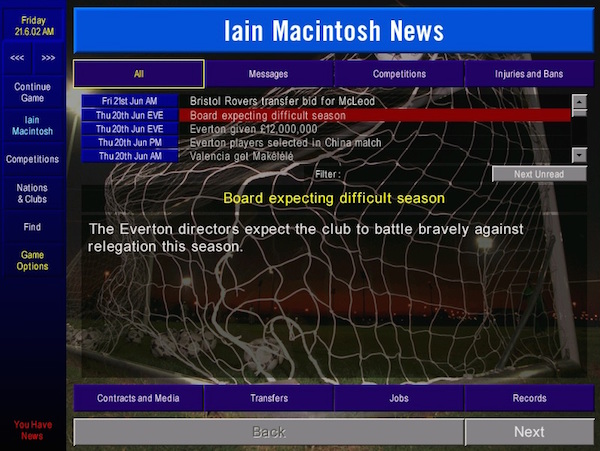